This website requires certain cookies to work and uses other cookies to help you have the best experience. By visiting this website, certain cookies have already been set, which you may delete and block. By closing this message or continuing to use our site, you agree to the use of cookies. Visit our updated privacy and cookie policy to learn more.
Home » Gensler, MANICA, NBBJ, PCL, Turner on Shortlist of Teams for New Honolulu Stadium
BuildingsCompanies
Development Competitions

Honolulu has identified three development teams that include architects such as NBBJ, Gensler and MANICA, and contractors such as PCL and Turner, as  the finalists to build a stadium within a new entertainment district.

“We are very fortunate to have been able to select three highly qualified potential partners who are as committed and passionate about moving the [stadium district plan] forward as we are, particularly at this time when Hawaii needs to spur our economic recovery and sustainability,” said Chris Kinimaka, public works administrator for the city Dept. of Accounting and General Services. 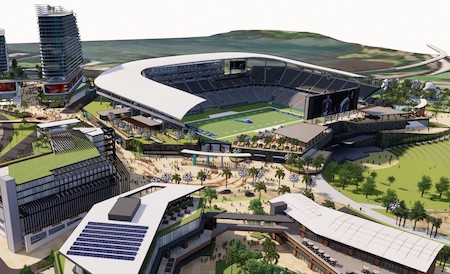 A request for proposals from the finalists comprises the second stage, which will be sought in mid-2021 and includes development and maintenance of the stadium—the centerpiece of a hoped-for entertainment and commercial complex intended to enliven the city's Halawa district.

A third team, led by developers EllisDon Capital, Kobayashi Group and BSC Acquisitions, has Design Partners Inc. and MANICA Architecture as designers and Turner Construction Co. and Nan Inc. as the construction team.