Infrastructure 'Bonus' May Be Thinner in Fiscal 2020

As construction industry officials wait to see whether Congress will agree to raise overall federal spending caps for fiscal 2020 and 2021, House Democratic appropriators are pushing to approve as many of the spending bills for fiscal year 2020 as they can by the July 4 break. Democrats, using relatively high guideline numbers, are laying down the first markers for eventual spending levels for construction and other programs for the fiscal year starting Oct. 1.

So far, House appropriators have rejected some of President Donald Trump’s proposed deep cuts in construction programs, notably a 31% reduction for Army Corps of Engineers civil works. In civil works and some other construction areas, appropriators have proposed increases over 2019. But they trimmed others. And it seems likely they will fall short of repeating the $10-billion-plus increase in overall infrastructure funds contained in the 2018 and 2019 appropriations.

That two-year infusion was good news for engineers and contractors, helping to boost total federal construction-related appropriations to $144.3 billion in 2018 and $148.8 billion this year from $123 billion in 2017, according to Associated General Contractors of America figures.

The House appropriators’ 2020 numbers are far from the last word. Final figures will hinge on negotiations among top Senate, House and White House officials over raising current limits on overall defense and nondefense spending for perhaps the next two years. If Congress fails to increase those caps, it would trigger automatic spending cuts under the sequestration process. 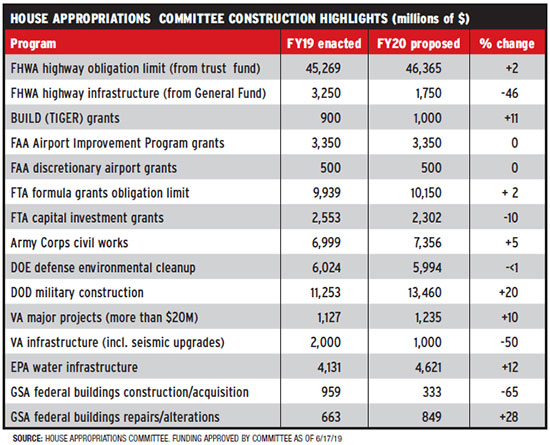 By June 14, the House Appropriations Committee cleared all 12 of the 2020 spending bills, which each fund one or more agencies. Committee Chairwoman Nita Lowey (D-N.Y.) is packaging the 12 bills into three or so mini-omnibus, or “minibus,” vehicles for floor votes.

With no deal yet on caps, Lowey is using levels in a budget bill drafted by Budget Committee Chairman John Yarmuth (D-Ky.), an appropriations staffer says. TheYarmuth bill, which hasn’t passed the House, would set the defense limit at $664 billion, up $17 billion from 2019, and the nondefense ceiling at $631 billion, up $34 billion. The numbers exclude overseas spending not subject to the caps. The White House and congressional Republicans are sure to seek more for defense, given Trump’s proposed $716 billion for that category.

Using the $631-billion nondefense level has allowed House Democrats to give sizable hikes to some construction programs. John Doyle, special counsel with law and lobbying firm Jones Walker LLP, says, “I think what they’re doing is trying to put upward pressure on the negotiations [on the caps] by moving forward with those higher numbers.”

For example, Lowey’s committee approved an 11% increase for DOT’s popular BUILD, formerly TIGER, discretionary grants. It also raised the core highway obligation limit, which draws on the Highway Trust Fund, by 2%, or  about $1 billion.

Susan Howard, American Association of State Highway and Transportation Officials program director for transportation finance, says she thinks a pullback on general-fund highway dollars was expected. “There will be an impact, certainly,” Howard says. “How much it will be felt directly, I’m not entirely sure. I don’t think it’s reached a crisis situation."

While the House committee advanced its 2020 spending bills, the Senate Appropriations panel hadn’t acted on any 2020 bills as of mid-June. Doyle, a former top Army civil works official, says, “What they’re waiting for is the ‘top line’ numbers”—the overall defense and nondefense limits.

The House appropriations aide says the final caps may be lower than the ones the chamber’s Democrats are now working with. “I think it would be very unlikely [the totals] would be higher,” the staffer adds.

Jimmy Christianson, AGC vice president for government relations, doesn’t expect the spending caps to be settled soon. “In my mind,” he says, “it’s not something that’ll be solved until after the August recess.”

Expanded TIFIA May Be in Transport Bill Mix