This website requires certain cookies to work and uses other cookies to help you have the best experience. By visiting this website, certain cookies have already been set, which you may delete and block. By closing this message or continuing to use our site, you agree to the use of cookies. Visit our updated privacy and cookie policy to learn more.
Home » Construction Dec. Jobs Surge by 38,000, Led by Heavy-Civil Sector
Mountain States Construction NewsWorkforceContractor Business Strategy
Construction Workforce

Construction added a strong 38,000 jobs in December but the industry’s unemployment rate showed mixed results, the federal Bureau of Labor Statistics has reported.

Construction’s December jobless rate rose to 5.1% from November’s 3.9% but improved from the year-earlier level of 5.9%, according to the latest monthly BLS employment report, released on Jan. 4.

The BLS unemployment rates aren’t adjusted for seasonal variations. Construction’s rates tend to rise in winter as the volume of building eases in some sections of the U.S.

Construction’s total workforce increased by 280,000, or about 4%, for the year ended Dec. 31, according to preliminary BLS figures.

The industry’s December job gains were led by a surge of 16,300 in the heavy-civil engineering sector, an indicator of infrastructure work.

The only category to show job losses was residential specialty trade contractors, which shed 2,900 positions.

Anirban Basu, Associated Builders and  Contractors chief economist, said in a statement that the BLS report  "reminds us that the U.S. economy continues to exapand and that many businesses, including construction firms, remain in growth mode,"

Ken Simonson, Associated General Contractors of America chief economist, said in a statement, "Job growth and pay increases in construction are outpacing those in the overall economy." But he added that contracting firms "continue to have difficulty finding qualified workers, with the number of unemployed workers who have construction experience at the lowest December level in  19 years."

BLS also reported that thel U.S. economy added 312,000 jobs in December. It said that the overall unemployment rate increased to 3.9% from November's 3.7% but declined from the December 2017 level of 4.1%. 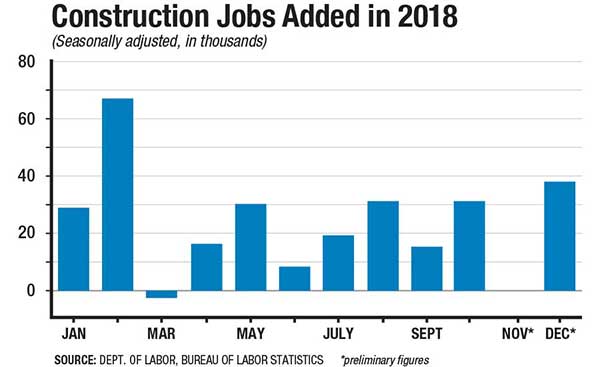 Construction Jobs Jump by 61,000 in Feb.; Jobless Rate Up From Jan.

Construction Jobs Soar by 52,000 in January