East to Rise in Global Market

Following a slow down in worldwide construction output last year, 2018 will to start a long period of growth, reaching 15% of total GDP by 2032, according to a new forecast. Established Western nations will be increasingly overshadowed by emerging economies, with China overtaking the U.S. in GDP.

In the next decade and a half, China and India will help shape the global construction scene, according to The 2018 World Economic League Table, just published by London-based Centre for Economics with Business Research with Global Construction Perspectives (GCP Global).

China’s global construction influence will largely be through its Belt and Road Initiative connecting East and West through various land and sea trade routes. Meanwhile, the country’s domestic construction market appears to be weakening, particularly in the housing sector, says WELT2018. Infrastructure investment in 2017 “remained strong” but construction’s longer terms prospects are “not encouraging”, it notes.

India’s vast infrastructure and rural development plans will also drive longer term output global, note the forecasters. Among the most ambitious plans is the $100 billion Delhi-Mumbai Industrial Corridor of 24 new cities along a roughly 1,500 km high-speed freight rail line. Vast sums of money are planned also for urban and residential schemes across the country.

In WELT2018’s forecast period India is set to overtake France, Germany, Japan and the U.K. to rank third in GDP, after China and the U.S. 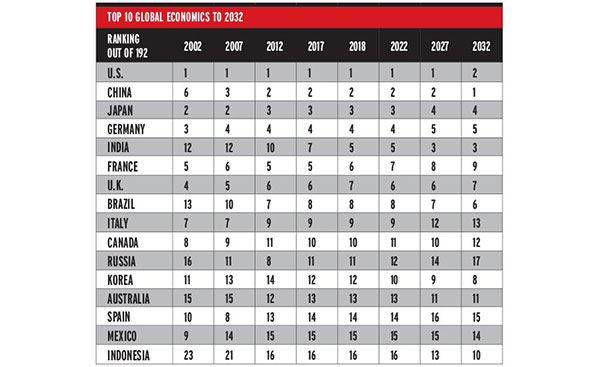 In the more mature economies, U.S. construction continues slow recovery, impeded partly by last year’s bad weather. Potentially worsening labour and staff shortages on and off site also throttle expansion. Increasing construction activity remains at state and local levels, while the impact of President Trump’s infrastructure plans are “now unlikely to have significant impact before the second-half of 2019 at the earliest,” believe the forecasters.

Construction output in Western Europe recovered more strongly in 2017 than expected, notably in Germany. Slower growth is expected there this year and next and prospects beyond that are less positive.

Among other larger European markets, the French recovery accelerated last year, boosted by residential construction which is expected to continue. The planned Paris Olympic Games in 2024 should reinforce longer term demand.

The Spanish construction market is expected to continue growing but from an extremely low post-crisis base. Italy’s recovery remains sluggish while output in debt-ridden Greece reduced last year with the completion of major highway projects

After a weaker 2016, output in many Eastern European countries increased last year. The “considerably stronger” markets in Poland and Hungary are expected to continue strengthening this year and next. The rate of decline in Russian construction output “slowed markedly” in 2017.

In South East Asia, rising populations and urbanisation will drive construction, says WELT2018. Infrastructure work will continue boosting Indonesian demand after a recent slow down. Construction output in the Philippines retains strong growth, driven by infrastructure, residential and commercial work and supported by housing and industrial and commercial output. Malaysian demand is expected to pick up after dipping last year.

In Africa, Nigeria and Egypt are recovering from big declines in construction output early in 2017. Algeria had a strong start to 2017, but weakened later in the year. The partial recovery in the oil prices during 2017 should, if sustained, boost many economies this year and next across Africa and also the Middle East.

Construction demand was particularly weak in Saudi Arabia in 2017, but has been slowly improving. The planned Expo 2020 exhibition is boosting demand in the U.A.E. But oil prices will govern the market. Construction activity has collapsed in war-torn Iraq and Syria but “once peace returns massive rebuilding will be required,” says WELT2018.

There's a Global Gust in the Offshore Wind Energy Market