The energy industry is in transition on nearly every level. It is buffeted by the crosscurrents of new technologies and competing systems of power generation and transmission that are disrupting long-established models and conventional ways.

Natural gas, photovoltaics and wind energy are the biggest winners so far. They are succeeding because of economics, not favorable government regulations. The dropping costs of natural gas and renewable energy are undercutting coal and nuclear generation on price.

Oil and gas supplies from hydraulic fracturing are at flood stage, but construction of long-distance pipelines from shale beds to market faces resistance, increasing costs, uncertainty and delays. The industry is striving to adjust. Petrochemical manufacturers are building plants closer to the wellheads, and a new natural-gas distribution hub proposed for West Virginia may offer fresh employment for idled coal workers, as demand for that resource fades. 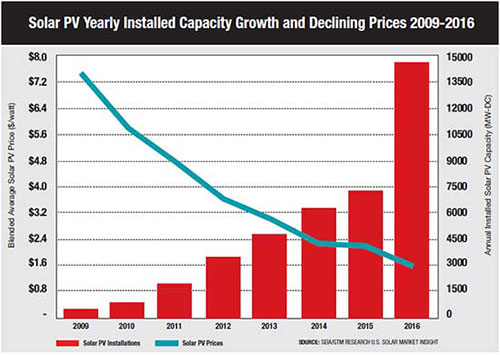 The U.S. solar market continues to surge. It had its biggest year ever in 2016, nearly doubling the previous production record and, for the first time, adding more capacity than any other source of energy, according to the Solar Energy Industries Association. But, Stanberry adds, solar prices declined 30% in the same year. This had the curious effect of making the industry appear to be shrinking, because while the number of installations grew by 90%, they generated less revenue due to lower prices.

While celebrating growth, the solar industry is warily watching a tariff case now before the U.S. International Trade Commission. The industry’s expansion was advanced, in part, on the low price of photovoltaic panels imported from China, where manufacturers benefit from government favors. However, this low-cost competition has driven U.S. panel makers out of the business. Two manufacturers, Suniva and SolarWorld Americas, have asked ITC to impose a global tariff on panels. If they prevail, the U.S. solar power industry may see panel costs climb.

“By and large, the impact won’t be felt until 2018, but it should be fairly immediate if that is to be the case,” says Camron Barati, solar analyst at IHS Markit. “What Suniva’s requesting is double the price that we’re seeing in competitive markets today.” The result could be a 60% reduction in U.S. installations, hitting utility-scale solar hardest, he adds.

According to the U.S. Energy Information Administration, wind energy comprised 8% of the nation’s operating electric generating capacity in 2016, more than any other renewable technology, including hydroelectricity. “You see market steadiness now after years and years of big swings,” Stanberry says.

Add to that the recent completion of the Deepwater Wind offshore project, which Stanberry calls “a landmark event.” Although offshore wind has faced intense opposition in the U.S., now that the ice has broken, Stanberry says he sees a “huge resource” opening up, not only off the East Coast, but also in the Great Lakes. Meanwhile, wind farms continue sprouting in the Central Plains.

But—and there always is a but—transmission-line construction to urban load centers is blocked by many states that see no economic benefits for their people.

The buffeting is forecast to continue.