This magazine's coverage of the war in Iraq has chronicled the often overlooked efforts of military engineers who set the stage for battle, breach obstacles and clear the way for advancing combat troops. Their work is difficult, dangerous and deadly, a point driven home this week by ENR Associate Editor Tom Sawyer. Advancing with elements of the U.S. Army's Third Infantry Division, Sawyer's story of the engineers' war speaks of heroism and death. 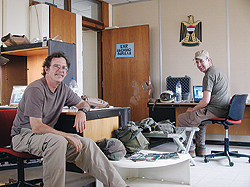 A firefight with a large Iraqi force at Saddam International Airport caught the 11th Engineer Battalion's Bravo Company by surprise. Platoon Sgt. Paul R. Smith provided cover for his unit to regroup, help the wounded and finally beat back the attack. Smith was killed but his actions saved hundreds of lives. A few days later, two of Smith's engineer comrades were also killed in battle.

As the scene shifts from war to reconstruction, Managing Senior Editor Andrew G. Wright also has advanced to Baghdad to report on the shifting roles of military engineers and now, private contractors. Sawyer had already set up a makeshift workspace in abandoned offices of what is now called Baghdad International Airport.

Their reports in this week's issue outline initial efforts of U.S. military and Iraqi engineers to map Baghdad's utilities and assess their condition. That information will be handed off to relief agencies and contractors who must follow up with repairs and in many cases, design and construction of new facilities.

Wright now will quarterback ENR's Iraq coverage as Sawyer returns to the U.S. and his information technology beat. ENR Associate Editor Thomas F. Armistead will join Wright in Baghdad to continue giving ENR readers timely coverage of rebuilding efforts. The story of reconstructing a country will take time to play out and readers should look to ENR for reports on how the construction industry performs.