Competition for projects in the four-state Southeast Construction region has been at an intense level throughout 2009, as an increasing number of building contractors find themselves chasing a declining number of new contracts, hoping to build a backlog during this historic downturn. 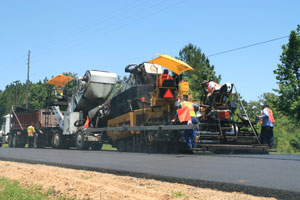 Photo: Sam Barnes.
State transportation departments throughout the Southeast are reporting that early bids for stimulus-funded projects are coming in lower than expected.

As the residential and commercial markets continue their declines, contractors operating in Florida, Georgia, North Carolina and South Carolina have been witnessing unprecedented bidding activity on some contracts. At the same time, as the billions in construction funding from the American Recovery and Reinvestment Act—mostly in the road-building sector—rolls out, transportation contractors are likewise experiencing a heightened level of competition.

Increased Competition
For most of 2009, contractors that had previously specialized in certain markets are now hoping to land contracts in other sectors. As more firms adopt this strategy, the number of bidders on projects has increased substantially.

“It is making for a more competitive market than we’ve seen in a long time,” John Reyhan, Skanska USA Building’s area general manager for Georgia in Atlanta, told Southeast Construction recently. “We are seeing on average more than 12 competitors submit in response to a request for proposals.”

Phil Roy, vice president of the Southeast region for Barton Malow in Atlanta, says as many at 35 bidders are now vying for jobs that in the past would have attracted only six or seven bidders.

Highway Work Up, Bids Down
For transportation contractors in the region, the bidding situation is similar, but for slightly different reasons. As a result of ARRA funding, there is—at least temporarily—a significant amount of new contracts pouring into the pipeline.

Prior to the enactment of ARRA, however, all of the state transportation departments in the region had been dealing with various degrees of funding challenges that were resulting in either decreased bid lettings or the potential for future cuts.

In North Carolina, for example, the volume of bid lettings in the first part of 2009—prior to stimulus funding—had declined by 75% compared to the previous year.

While the stimulus doesn’t eliminate those challenges, it is providing a cushion to what otherwise would have been significant declines in bid-letting activity.

And because those funding problems will remain when all of the stimulus projects have been awarded—unless somehow remedied by the next reauthorization of the federal transportation program—contractors are hungry to line up as much work now as they possibly can.

So far, bid estimates are coming in significantly below state DOT estimates, according to state and local officials. Also, because of ARRA’s use-it-or-lose-it provisions, state DOTs throughout the region are looking to fund even more projects with stimulus dollars.

North Carolina, for instance, has been one of the most aggressive Southeast states in terms of getting its stimulus projects out to bid. Berry Jenkins, Heavy-Highway Division director for the Carolinas AGC in Raleigh, says bid prices have been about 20% to 25% lower than state estimates. Jenkins claims the number of bidders per project has been more than double the usual.

“I don’t want to say it’s cutthroat, but competition is tremendous,” he says.

Jenkins says the feeling is that many firms are bidding so competitively—perhaps even below cost—as a matter of survival and as a means of retaining workers. And he adds that firms that had previously not bid DOT projects are now entering into this market.

“It’s just a function of the economy,” he says. “I think (this type of bidding environment) will continue for at least the next few months, maybe until the end of the year. People are so hungry for work.”