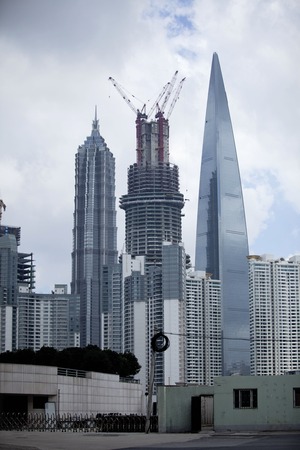 Photo by Nicky Almasy
If done in 2015 as expected, Shanghai Tower (center), on its way to 632 m, would rank as the world's second-tallest skyscraper.

Tall-building boosters, expecting 7.3 billion people to be living in cities by 2050, are struggling to make urban skyscrapers more sustainable. They agree that the road to true greening is not an easy one.

"We will likely get there in 50 or 60 years," predicted Timothy Johnson, chairman of the Council on Tall Buildings & Urban Habitat, at CTBUH 2012, held on Sept. 19-21 in Shanghai.

Johnson, a design partner in the New York City office of architect NBBJ, estimates that by 2060-70, skyscrapers will not only produce more energy than they use, they will produce food.

CTBUH named its ninth world congress "Asia Ascending: The Age of the Sustainable Skyscraper City." But tall-building experts from all sectors—developers, designers, contractors, academics and suppliers—countered that this is not the age of the sustainable skyscraper city. Greenwashing—or bogus sustainability—and an absence of reliable data on energy-efficient design performance are barriers to sustainability, said David Scott, a director at contractor Laing O'Rourke, Dartford, Kent, U.K.

Bob Pratt, a managing director in the Shanghai office of developer Tishman Speyer Properties, added, "Once we have measuring sticks about performance, we will know what to do" to make buildings sustainable.

But getting measuring sticks is not easy. Many owners do not want to publicize energy performance. Bank of America declined to provide data on its New York City building for the CTBUH's recently published guide, "Natural Ventilation in High-Rise Office Buildings," said one of the guide's authors.

The 183-page book, available to non-members for $60, is one CTBUH attempt to aid the sustainability movement. But even partial natural ventilation is not always attainable—especially in cities with poor air quality, such as Shanghai and Dubai, U.A.E.

Amid the "tall is better than sprawl" chatter at the conference, which drew 850 attendees from 43 countries, supertower architect Adrian Smith burst a bubble when he offered preliminary research findings on density and residential development. "It looks like the four-story walk-up community is the most sustainable typology from a carbon-emissions standpoint," said Smith. "This was a surprise."

Adrian Smith + Gordon Gill Architecture is studying 2,000 units in different configurations in its base city, Chicago. The extremes range from one supertower with 2,000 units to single-family houses on quarter-acre lots.