Carol Ross Barney, a Chicago-based architect who specializes in making public places approachable and welcoming, received the American Institute of Architects (AIA) Gold Medal—the first woman to receive it while she is still alive and without sharing it with a partner. Julia Morgan received the award decades after her death; Denise Scott Brown in 2016 and Angela Brooks in 2022 each won with their partners.

AIA Gold Medal recipients are recognized for producing a “significant body of work that has had a lasting influence on the theory and practice of architecture.” Barney designed the first federal building in the U.S. lead-designed by a woman—the Oklahoma City Federal Building, which she designed after the 1995 bombing destroyed the Alfred P. Murrah Federal Building.

Her other well-known works include the Chicago Riverwalk, a 1.25-mile-long public path along the bank of the Chicago River; and smaller projects that still are known for making public spaces welcoming such as the flagship McDonald’s restaurant in Chicago’s River North neighborhood that was the company’s first store to use a whole-building sustainable design methodology. Ross-Barney spent two decades promoting the idea of the Riverwalk and making the Chicago River a public amenity and not a channel that buildings and people, before her work took hold, turned their backs to. Gathering support for it before being awarded the design contract was a major focus of the firm for those 20 years.

Ross Barney founded her practice, Ross Barney Architects, in 1981, after she did a stint in the Peace Corps, working for Costa Rica’s fledgling national park service. In all, Barney and her firm have been cited more than 200 times.

Here are some of Ross Barney’s thoughts about her career and specializing in designing public spaces:

Why did you decide to specialize in public spaces – instead of private ones?

One of the things that helped my practice when we were just starting out is the government started to become interested in commissioning women and minorities. So, we got some commissions where they were looking for a woman designer. That meant we did a lot of public work because private companies weren’t necessarily very worried about that. Beyond that, I've always loved doing it because I feel empowered when I do. When I work on a public work, it's for me and it's for my community. So, I feel a particular responsibility for the quality and excellence of the work.

I understand that when you got your start in public architecture many public buildings were designed by engineers – not architects.

“We do a lot of infrastructure, a lot of transit, and in those cases, often the lead consultant is a big firm. Sometimes there’ll be architects involved, but the projects are usually engineer-led. … Quite honestly, the clients don't expect much of the architecture. They don't necessarily ask what it is going to look like. But the irony is, the architecture is what people connect with the most.

What do architects add to public design?

With a train station or something like that, you can do a station, or you can do a station that really is a space. It's comfortable. The materials complement each other. It makes people feel good as they use it. And so that's what we've spent a lot of our time doing. People think architecture is just the decoration on the outside or inside of a building, but the truth of the matter is all those materials are determined by the function of the structure. Architecture is really important. Design in general has a huge impact on how livable our environment is – how livable our cities are.

Before you designed the Riverwalk, you did a lot of lobbying and advocacy work. Is the Riverwalk something that has become accepted as a way for cities to improve their waterfronts? 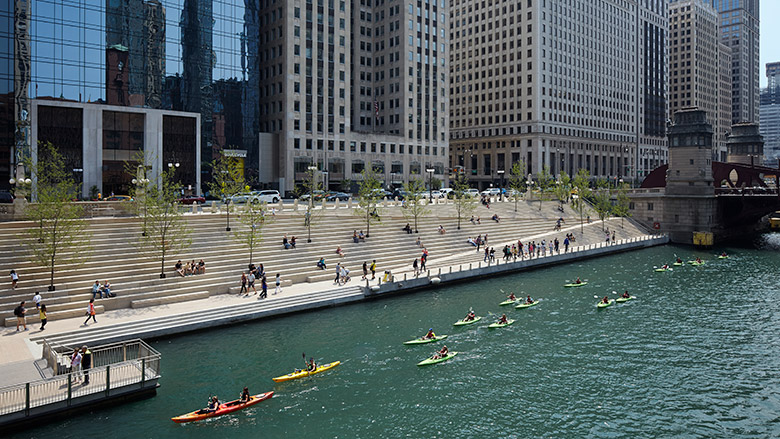 I think Riverwalk and other projects like it introduce people to how exciting an environment can be. Before the Riverwalk, I don't think a lot of Chicagoans thought walking along the river was something that they'd ever want to do. But now that they've experienced the Riverwalk and how much it can improve the downtown, people understand what's at stake and how great a space can be.  Activism leads to more activism. Now they are more likely to ask for that – to demand it.

You were recently selected to design the $40-million DuSable Park south of Navy Pier, at the confluence of the Chicago River and Lake Michigan. And you’ve also been picked to design a new 79th Street station on the Metra Rock Island line. While all of this sounds exciting it is very familiar territory for you?At 73 years old, is there anything that you would really like to do that hasn’t come your way?

I still really like doing this work. Looking for more efficient solutions; that’s the sort of work we like to do in my studio.

A familiar question people ask older people in general – and women in particular – is, “Why are you still working?”

Architecture is generally an old people's profession. A lot of the architects practice their entire lives because it's not really a job. It's a vocation and a profession. That doesn’t mean that I'm not really anxious to see young architects in my studio develop their skills —t hat's a huge part of our effort right now. When you have ideas and a philosophy of what should be done in the future, you have to make sure that you have younger minds working with you. Otherwise, your ideas will die with you.