Builders Rise to the Challenge at Tucson Research Facility

When it comes to getting a leg up in the race to attract research grants and top scientific talent, universities task designers and builders with providing as much pow for the punch as possible on their new facilities. To that end, the team behind the University of Arizona’s $99-million Grand Challenges Research Building endeavors to wrap up a seven-level lab structure that will house around a half-dozen different cutting-edge functions and programs in an extremely tight footprint within just 2.5 years.

To achieve these goals, the team is relying on the efficiency of a prefabricated facade system as well as astute anticipation of supply chain issues that have snarled many other projects around the U.S. They also enlisted the help of a little robot to shave days off mundane carpentry tasks. With building enclosure set for completion in February, crews are proceeding with building systems and interior work. At peak, the project will employ around 185 workers.
Photos by Scott Blair/ENR

The GCRB project will help fulfill U of A’s “grand challenges” pillar of its strategic plan, which it defines as “tackling critical problems at the edges of human endeavor.” This includes space exploration, human and intelligent systems and health care technology.

“The university’s sponsored research portfolio is growing and on track to reach $1 billion annually in the next two years,” says Peter Dourlein, university architect and associate vice president of planning, design and construction. “Such growth requires investment in both existing facilities and in expansion via new purpose-built facilities” such as the GCRB.

“This facility will help us attract the best researchers and grants while inspiring critical and extraordinary discovery,” he says.

“This facility will help us attract the best researchers and grants while inspiring critical and extraordinary discovery.”
—Peter Dourlein, University of Arizona

The 108,000-sq-ft building expands the school’s optics research programs, which include lasers, lenses, spectrometers, medical equipment and the massive mirrors required for telescopes, satellites and other space exploration functions. It will also house a new quantum networks center to create new methods to transmit information and boost computing power. Other researchers will track space junk, experiment with sound and delve into bioinformatics, which uses the power of statistics to analyze biological data and help improve health outcomes for patients.

The project was awarded under a progressive design-build contract prior to the start of COVID-19. The resulting pandemic pause gave the team—comprised of Kitchell Contractors, ZGF Architects LLP and BWS Architects—time to fully complete the design before the July 2021 construction start. Substantial completion is set for February 2024.

Optical research requires special laser tables, each weighing around a ton, that utilize an air-ride system to provide vibration-free platforms for optical experiments and lab work. To enable this type of research, the facility needed a “beefed-up structure to reduce vibration and increase the rigidity of the building,” says Rick Hook, senior project manager for Kitchell. The structure includes seven concrete shear walls and 14-in.-thick concrete decks.

The foundation comprises a concrete mat with 72 caissons delving 40 ft to 50 ft deep. A basement level will house some of the most vibration-phobic labs. The site is located on a small infill former parking lot in a densely packed area of campus surrounded by two major sporting venues and two research buildings that house sensitive optical instrumentation. “We spent a lot of time monitoring the existing facilities, and we timed [caisson drilling] so that our greatest impact would be during the summer months when the researchers were gone. Most of our caissons were done before school started,” Hook says.

To the east of the GCRB, which is roughly rectangular in plan, sits a mid-century optical sciences building where telescope mirrors as large as 6 meters in diameter are fabricated and polished within its four-level basement. Once completed, the mirrors are lifted by crane out of the basement and onto a loading dock just a few feet from the edge of the new building. This ongoing activity during construction required “a lot of logistics and coordination with the existing facility to keep them up and running,” Hook says. During design, structural engineer MWG began calculating the loads that the new building would impose on the neighboring building’s four-level basement, “they realized that the existing basement and its roof were not designed to handle the loads that have been put on it routinely over the years [from the mobile cranes] while they are pulling out mirrors,” says Gary Cabo, principal and design architect with ZGF.

The solution, added into the design-build contract, involved constructing a new concrete crane pad that sits atop six 5-ft-dia caissons that penetrate 60 ft to anchor the pad into earth below the existing building’s lowest basement level. It was delicate work, since some of the caissons were constructed just 18 in. from the existing basement wall, Hook says.

When not in use as a loading area for mirrors, the space will serve as a pedestrian-oriented promenade, part of numerous outdoor improvements to the area around the new building.

The north side of GCRB faces one of the campus’ signature structures, the copper-clad Meinel Optical Sciences Building, which was completed in 2006. “Our building is almost three times the size of Meinel,” says GCRB project designer Sean McGreal, also a principal at ZGF. “We are ginormous behind this little jewel box of a beautiful building, and we don’t want to overwhelm it.” Construction on the new building must occasionally pause for the university to utilize the new crane pad to safely lift massive and fragile mirrors from a neighboring building. The lenses are used in observatories around the world.
Photo courtesy Kitchell

To meld with the other two optical sciences buildings and make a cohesive mini-campus, the architects chose a metal panel system that would rust over time, echoing Meinel’s copper panels. A skybridge also connects Meinel with the new building.

“We didn’t have enough space that we could adequately scaffold the outside of the building to traditionally stick frame it, so we have panelized the exterior of the building,” says Hook. All of the skin—including framing, sheathing, waterproofing, metal panels and glazing—was manufactured off site in Tempe, Ariz., about 100 miles north, by Kapture Prefab. The controlled environment enabled safer assembly with higher quality control, says the team.

“They realized that the existing basement and its roof were not designed to handle the loads that have been put on it routinely over the years [from the mobile cranes] while they are pulling out mirrors”
—Gary Cabo, ZGF Architects LLP

The majority of panels are 14 ft tall by 10.5 ft wide, matching the floor-to-floor and lab planning modules used to lay out the floorplans. The large size minimizes the number of picks and reduces disruption to the university. The panels arrive by truck four at a time.

The skin may appear “like there is a lot of variation, but it’s several typical metal panels over and over again used in different ways,” Hook says.

The unoccupied seventh floor that houses mechanical systems is sheathed in 21-ft-tall panels, which are trucked two at a time.

In all, 235 panels will be manufactured and installed by the time the building is fully enclosed in February. Work will then proceed on building systems, painting and finishes.

Unlike most higher education buildings where designers try to maximize daylighting, the optical research being performed within several floors of GCRB required designers to provide researchers with the total absence of light in lab space. Therefore, labs are concentrated in inner sections of each floor, surrounded by a racetrack-like hallway with offices taking advantage of the windowed perimeter. 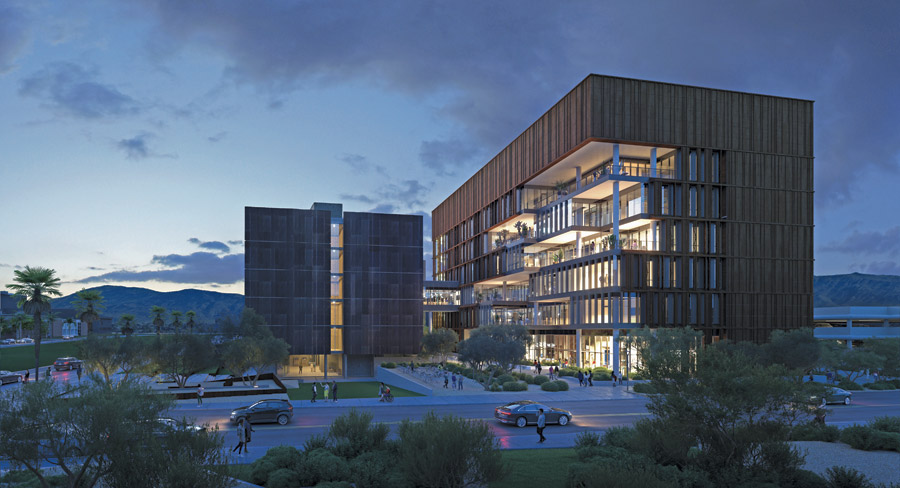 The building’s northwest corner “erodes” to form a series of balconies and cantilevered conference spaces, which designers hope will become an extension of the landscaped plaza on the ground floor. A skybridge (lower photo) connects GCRB to the existing Meinel Optics Sciences Building.
Rendering Courtesy U of A/ZGF/BWS; Photo by Scott Blair/ENR “The more public functions of lobby, classrooms, lounges, conference spaces and the like were gathered to the most prominent corner of the new facility and focused to the campus’ core main mall,” says U of A’s Dourlein. “This [northwest] corner was designed as a deconstruction of the building where most of the glass occurs and includes outdoor balconies and landscapes, providing for beautiful views in and out of the building.”

The architects liken the “deconstructed” corner to erosion, where a series of balconies and cantilevered conference rooms “become an extension of the landscaped area on the corner and allow that to extend up through our facade to become more of a vertical landscape of spaces,” says McGreal. Each staggered balcony shades the one below it, mitigating Tucson’s occasional intense heat.

With manpower shortages a perennial issue in the Southwest, Kitchell employed a nonhuman worker to handle all of the floor layouts. Using “Dusty the Robot,” the building’s 3D BIM model was converted into markings printed by the robot throughout floorplates to indicate placement of walls, mechanical penetrations, overhead racks and more, says Cory Thellmann, a project manager with Kitchell. Once the team was up to speed, they were able to use the robot to lay out a floor in a day and a half, versus two weeks using the traditional—and monotonous—layout method.

“We sent out every contract we possibly could [to trades] and told everybody to get submittals and start ordering material.”
—Cory Thellmann, Kitchell

Besides some initial challenges in getting shipments of concrete due to local fly ash shortages, Kitchell was able to circumvent many of the supply chain issues that are beleaguering many project teams today.

“We saw the writing on the wall, how everything was trending,” Thellmann says. “We sent out every contract we possibly could [to trades] and told everybody to get submittals and start ordering material.” The university also allowed contractors to bill for stored materials, which allowed materials that otherwise may not have arrived on time to be warehoused, he adds.

The project’s delivery method also played a role in mitigating issues, says Dourlein. “We know there are unprecedented challenges in construction, including supply chain difficulties, labor shortages and price escalation. Progressive design-build allows for the construction team to have ‘skin in the game’ from the beginning of the project. Their expertise in both budget management and how the project would best be executed is critical guidance to the design.”

He adds: “We have found that in our case, having an integrated design where the design construction and owner’s teams are all at the table and pulling in the same direction yields the highest levels of success.”