Contractors are preparing to begin the third, final and largest phase of a long-planned project to replace two decommissioned Soo Locks in Michigan with a larger lock. The plan is aimed at taking pressure off the sole existing lock big enough to accommodate larger modern cargo vessels at the point known as the “linchpin” of the Great Lakes navigation system, and ensure that shipping will remain uninterrupted.

The U.S. Army Corps of Engineers Detroit District awarded a $1.1-billion contract earlier this year to the joint venture Kokosing Alberici Traylor LLC for the final phase of work. Congress also reauthorized in the Water Resources Development Act passed in December the “new lock at the Soo” project at an increased $3.2 billion, which allows the Corps to award another $794.5 million in contract options to fully complete the project. The work is fully federally funded, and Congress last authorized it at a lower cost in 2018.

Soo Locks are located on the St. Marys River between Sault Ste. Marie, Mich., and Ontario, Canada. They allow vessels on the critical shipping link between Lake Superior and Lake Huron to bypass a stretch of rapids with a 21-ft elevation change in the river. U.S. Great Lakes ports handled 5.2% of all U.S. waterborne cargo in 2019, according to the Corps.

About half of domestic traffic on the Great Lakes navigation system passes through the Soo Locks, says Mollie Mahoney, Corps senior project manager.

Of the four U.S. Soo Locks—there is also one smaller lock used for recreational boats on the Canadian side—only two are currently active and just one, the Poe Lock, is large enough to handle typical 1,000-ft “laker” bulk shipping vessels.

As a result, about 90% of tonnage passing through the facility is restricted to that lock, Mahoney says. Ships less than 730 ft long and 76 ft wide can use the neighboring MacArthur Lock.

The Poe Lock, which opened in 1968, is now older than the 50-year lifespan for which it was designed. It requires an increasing amount of maintenance, but crews only have a window during the winter navigation shutdown between January and March for work.

“Each year in the last decade, we’ve had more and more repairs that are required,” Mahoney says.

The new lock plan was originally authorized in 1986. It would allow for maintenance to be done on the Poe Lock outside of bitter cold winter months without interrupting navigation operations, says Rachel Miller, supervisory Corps civil engineer. The plan calls for construction of a lock equal to the Poe Lock, with a chamber that is 1,200 ft long, 110 ft wide and 32 ft deep. The project also involves rerouting power and fixing infrastructure associated with a hydroelectric power plant located at the locks. Once the new lock opens, the Corps plans to undergo a major rehabilitation of the Poe Lock. 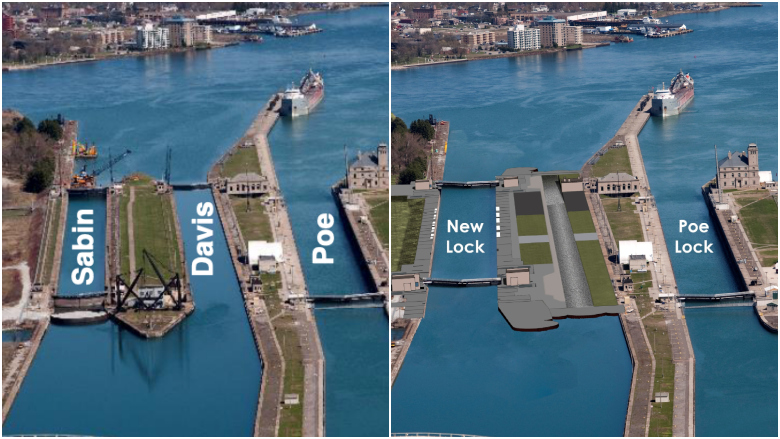 A rendering (right) shows the placement of a planned lock beside the existing Poe Lock. The smaller MacArthur Lock sits on the opposite side of the Poe. Courtesy of U.S. Army Corps of Engineers

The final phase of work on the current project would involve construction of the new lock that is 30 ft wider and 9 ft deeper than the existing lock whose footprint it overlaps. The work would also include demolition of one lock, infill of another, plus construction of downstream approach walls and a new pump well.

The joint venture of Westerville, Ohio-based Kokosing Industrial, St. Louis-based Alberici Constructors and Evansville, Ind.-based Traylor Bros. began mobilizing in November in anticipation of major construction starting in the spring. The Corps expects to complete the work in July 2029.

Another joint venture of Kokosing and Alberici also won the $117-million phase 2 contract. The Corps awarded the contract in 2020 and work began in 2021. The scope of work in the phase includes rehabilitating 100-year-old upstream approach walls and adding concrete caps with mooring bollards and LED high-mast lights for the area where freighters tie up while waiting to pass through the lock. Mahoney says phase 2 is more than 70% complete and expected to wrap up in the fall of 2024.

The first phase of work involved deepening the upstream approach channel from 25 ft to 30 ft in order to accommodate modern vessels. The Corps awarded a $53-million contract in January 2020 to Mesquite, Nev.-based Trade West Construction Inc. for the first phase. The contractors used a submergible excavator to break up 6-ft-thick bedrock. They removed more than 300,000 cu yd of material, about two-thirds of which was bedrock, Mahoney says. The contractor substantially completed phase 1 work last August. 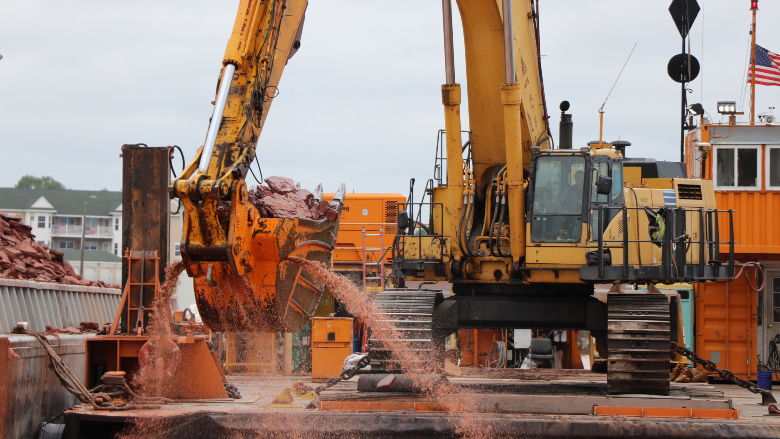 Contractors had to "think outside the box" to obtain parts for repairs when the remote location exacerbated COVID-19-related supply chain issues. Photo by Carrie Fox/U.S. Army Corps of Engineers

Work on the second and third phases will proceed in parallel, and while they are being performed by two different project teams, Jeff Hartman, project manager at Kokosing, says the company’s involvement in both JVs allows for some overlap between them, and for lessons learned on the second phase to be applied in the third phase. Miller says it has cut down on the learning curve and helped the Corps and contractors more quickly agree on goals for safety and quality. The project has passed 1,200 days and more than 361,000 man hours without an OSHA-reportable incident, she adds.

“We’ve been able to come out of the gate with a good level of coherence and being on the same page with our contracting partners,” Miller says, calling it “a win for the project.”

The approach has also helped the contracting team deal with some challenges presented by the unusual site. Miller says the remote location on Michigan’s Upper Peninsula has exacerbated industry-wide workforce and materials shortages, with less local labor available and longer lead times for supplies compared to other projects. While lock maintenance is performed in the winter, construction shuts down between December and mid-April.

The jobsite is also located on an island in the river, requiring that all personnel, equipment and materials be ferried over without disturbing a protected fishing area nearby. Hartman says the companies worked with the city of Sault Ste. Marie to improve some existing dock facilities upstream and downstream of the jobsite for logistics use.

“Those improvements will remain and provide benefits after we leave as well,” he said.

The phase 2 contractors also erected their own concrete batch plant on the island, which Miller says produced 34,000 cu yd of concrete for the 2022 construction season.

“As you can imagine, putting a concrete truck on a barge and trying to cross an active shipping lane isn’t all that great, especially when it comes to the time sensitivity of concrete” Miller says. “There’s also really not a whole lot of suppliers of concrete in the area.” 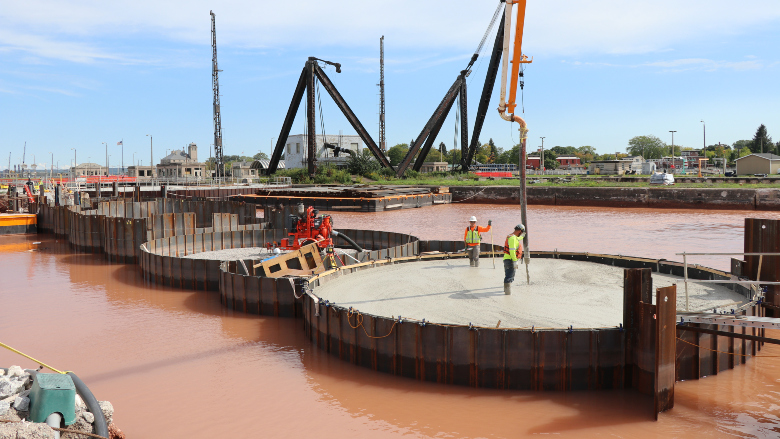 Contractors opted to erect their own batch plant rather than move it across the ship channel. Photo by Carrie Fox/U.S. Army Corps of Engineers

Miller says the team is also expecting that availability of cement may become a problem within the next couple of years. Significant concrete production for phase 3 won’t begin until 2024, but the contractors are planning ahead.

The team will use the winter break in work for “some very intense planning and procurement activities,” Hartman says. It also highlights one of the advantages of forming a joint venture. “Combining the resources and relationships of three major infrastructure construction companies has played a role in helping to mitigate some of those [supply chain issues] with deep relationships that each company has within the industry,” he adds.

An international rail bridge also crosses the site, and Miller says that required extensive coordination for cranes working near it, as well as vibration monitoring to ensure the bridge’s structure is protected from any stability issues. The bridge is the source of the occasional trespasser.

The remote location has also provided benefits on a human level.

Spencer Beeching, Kokosing vice president of operations, said members of the contracting team have become involved with the local community as they relocated their families to the area for the project. They organized donations of Christmas gifts for local foster children and outings for their families to go ice skating or watch movies.

“We want to be a good neighbor and contribute to having a better community as we progress through the project,” Beeching says.