The North Satellite Modernization Project (NSAT) renovated and greatly expanded an existing airport facility while increasing the number of aircraft gates to 20 from 12. Designed to celebrate the Pacific Northwest, the NSAT is highlighted by an 80-ft high “river” of light, known as the central core. Using a general contractor/ construction manager (GC/CM) delivery method, the project team relied on continuous collaboration to complete the job three months ahead of schedule while keeping the facility open for main tenant Alaska Airlines.

An example of a delivery improvement made by the team includes the relocation of an existing duct bank that powered the main electrical room for the entire terminal. Hensel Phelps examined the duct bank at 30% design completion and saw that it required rerouting to support the new basement area and structure. Through an integrated approach and extensive virtual modeling, the contractor suggested digging around and under the duct bank and then shoring it to support construction 15 ft below rather than engaging in a costly and time-consuming reroute. The solution enabled the completion of the mass excavation three months early. The schedule savings allowed Alaska Airlines to operate from active gates earlier and netted more than $1 million in savings.

During the early stages of the pandemic in 2020, the NSAT team accelerated the schedule by taking advantage of low passenger flow in the central core area, the most heavily phased portion of the critical path. The team revised the phasing plan, received buy-in from stakeholders and executed it to the benefit of the project in both schedule savings and project cost savings. The revised plan allowed the team to open the facility four months early under a temporary construction occupancy (TCO).

NSAT’s structural design employs a unique approach to seismically reinforcing the existing building. At the south end of the complex is a structure built in the 1970s that was strengthened by building around it, an approach known as the “seismic hug.” Running along the perimeter of the existing building, the steel moment frame system of columns and beams connect to drilled concrete piles reaching down 125 ft. The new structural system encapsulates the existing facility base steel and columns while still preserving the concourse views.

This innovative approach was also an idea reached at 30% design to save elements of the existing infrastructure and reduce emissions. This approach allowed significant portions of the existing building frame to be retained. 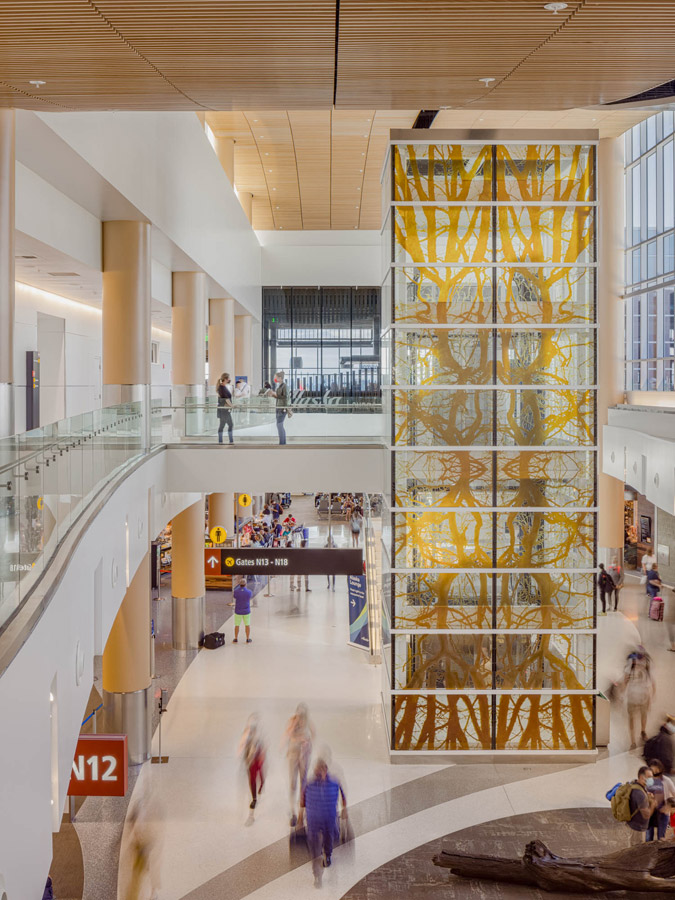 The project also made best use of concourse civil infrastructure to reduce waste. The existing PCC apron pavement surrounding the concourse was thoroughly evaluated using FAA criteria to determine structural integrity and remaining useful life. This evaluation effectively reduced the total square yardage of pavement replacement associated with the renovation of the concourse.

Back to ENR Northwest Best Projects 2022