The team utilized an earth pressure balanced (EPB) tunnel boring machine for the two twin-bored tunnels, 22 ft in diameter, with precast concrete segmental lining. They also dug more than 3,700 ft of cut-and-cover tunnel construction in LA’s highly congested financial district. The cut-and-cover section and the three stations were constructed during 55-hour weekend closures and with the use of temporary traffic decking. 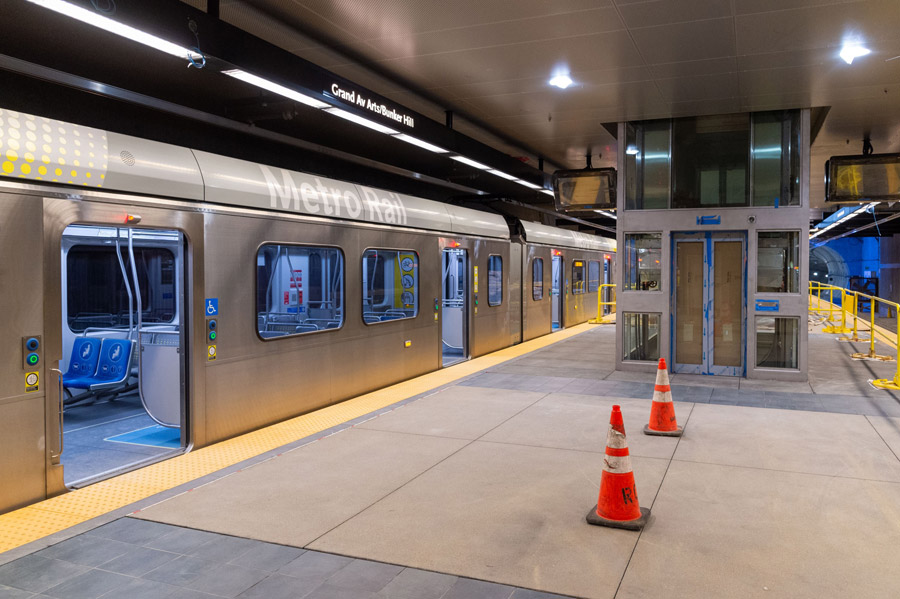 A major challenge occurred when the tunnel boring machine unexpectedly hit three steel piles and 47 steel tie-backs hidden underground. This caused damage to the screw conveyor and could have delayed the project for months. However, by working collaboratively, the team was able to expedite the procurement and replacement of the screw conveyor, while shifting the mining operation to gain back two months on the schedule that was lost.

Another challenge was the underpinning of the historic LA Times Building using precast panels and cast-in-place columns and lagging. This system was able to limit the amount of ground movement caused by construction operations.

A design highlight is the 2nd and Hope Station, the largest of the three new depots, which is located 100 ft underground. This eight-story station extends 400 ft from the Disney Concert Hall to the adjacent Broad museum and Grand Avenue. It is accessible via a pair of 45-ft-tall stainless steel and glass towers, with 94-ft by 37-ft-wide fritted glass shade canopy. Six elevators descend to a 70-ft-tall underground atrium with a full height mosaic tile art wall.

A concourse walkway leads to an open concourse level elevated above a 35-ft-tall open platform area with arched ceiling and end wall porcelain art panels. Elevators, escalators and stairways connect the concourse to the platform. Ancillary levels below the platform as well as between the concourse and plaza levels are incorporated to provide electrical power, train control and communications; fire life safety systems; and mechanical equipment to ventilate the station. 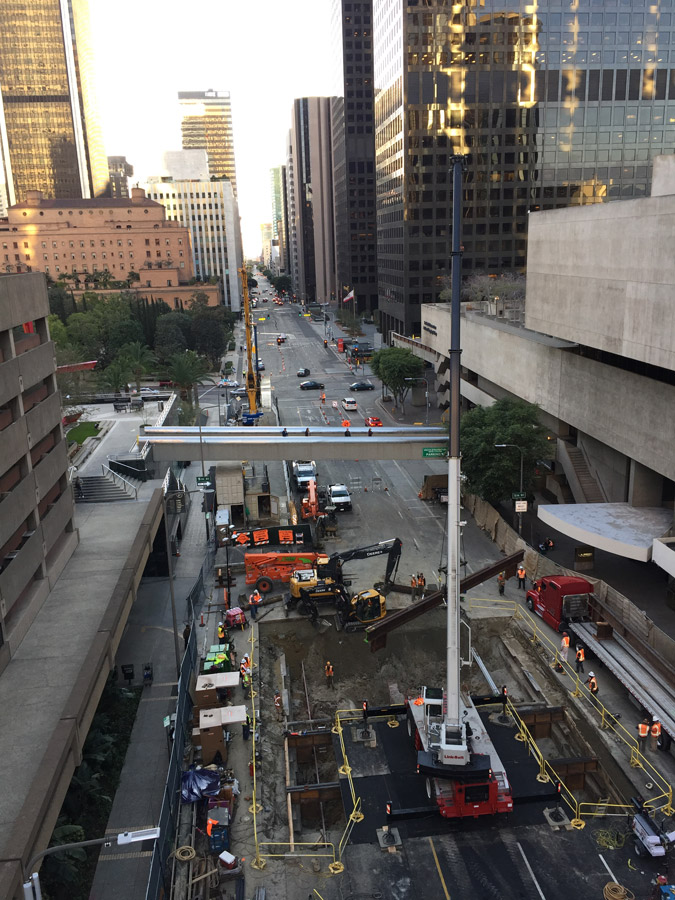 The team also had to deal with an existing 123-inch reinforced concrete horseshoe arch storm drain that required replacement. To do this the team opted for a Hobas centrifugally cast, fiberglass reinforced, polymer mortar (CCFRPM) pipe. The Hobas pipe has a 126-inch internal diameter, the largest Hobas pipe in the world, and offered a stronger, lighter and more efficient alternative to the existing reinforced concrete pipe.

The team installed 320 linear ft of Hobas pipe in 20-ft sections, with each new segment lowered onto temporary support structures until secured with lateral and longitudinal braces. It was then surrounded by 18 inches of 100-psi slurry, providing structure, support and flexibility to help the Hobas pipe remain durable and reliable for the foreseeable future.