With a stellar record of preparing D.C. students for college, Benjamin Banneker Academic High School has a long history of setting a high bar. To build a new home for this lauded institution, the design and construction team was also expected to meet very high standards. Along with providing improved facilities for academic and extra-curricular excellence, the team needed to deliver a high-performing facility that could achieve net-zero energy use.

Working under a design-build contract with the District of Columbia Dept. of General Services, general contractor MCN Build Inc. and architect Perkins Eastman broke ground on the $137-million school in September 2019 with the mission of completing the 190,000-sq-ft school, athletic fields and community amenities in under two years.

“There are too many stories of D.C. schools that didn’t get done on time or didn’t meet quality expectations,” says Andrew Doyle, senior project manager at MCN Build. “We were committed to doing what we said we’d do.” 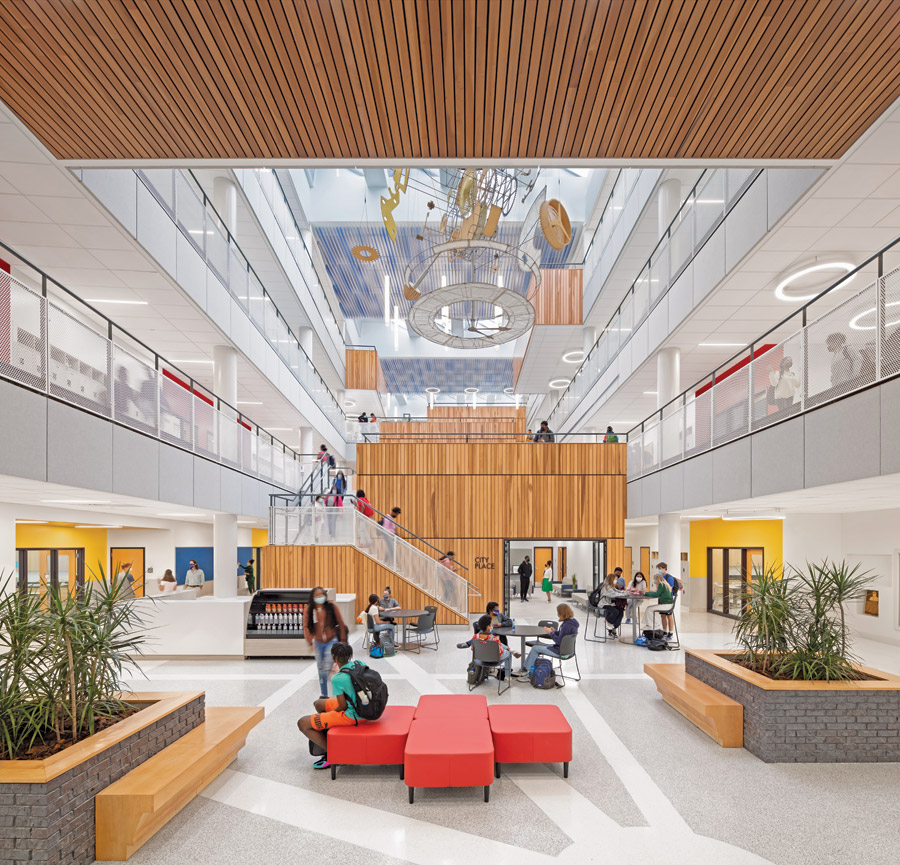 The Learning Commons functions as the school’s literal and figurative heart. Every level of the four-story campus engages this central space, providing formal and informal places to gather, socialize, and collaborate.
Photos by Joseph Romeo Photography, courtesy MCN Build Inc.

Although contracted through DGS, the project site was shared by D.C. Public Schools and D.C. Dept. of Parks and Recreation. One portion of the lot would be the site of the four-story school, while the other would feature a new multipurpose football field, a baseball field, basketball courts and tennis courts. Additionally, the project scope included providing the community with a skate park, public basketball courts and a dog park. 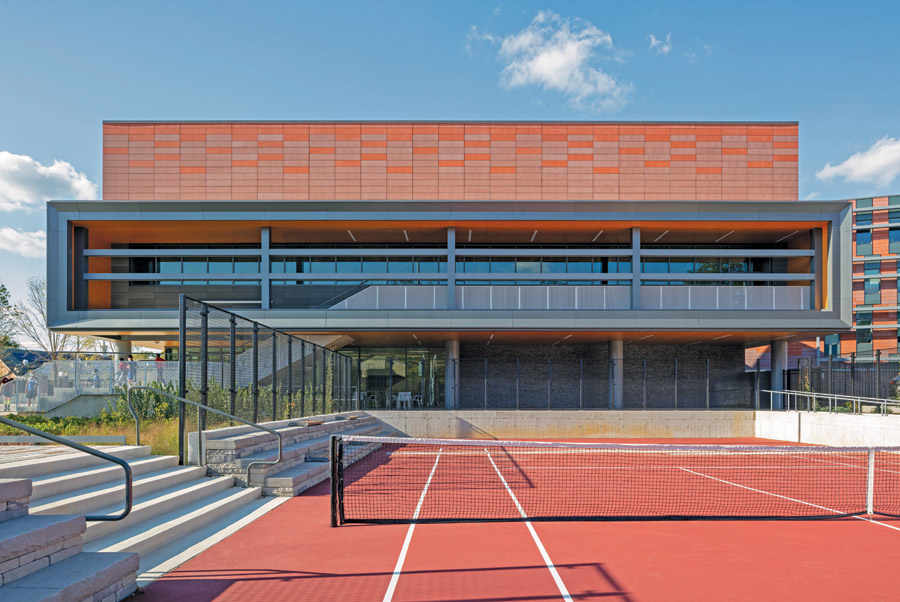 The massing of the stacked gym and cafeteria creates a notable civic presence on Rhode Island Avenue, a major thoroughfare through the city, and the open spaces provide places for the school and the community to come together.
Photos by Joseph Romeo Photography, courtesy MCN Build Inc.

With roughly half of the site dedicated to outdoor features, the team was able leverage that space to incorporate 150 geothermal wells drilled 550 ft deep—establishing a significant component of the sustainability strategy. Using LEAN principles, MCN Build collaborated with its subcontractors to schedule construction of the geothermal plant based on crew and equipment availability. The strategy enabled crews to have up to four drilling rigs working on site at the same time. Ultimately, the strategy resulted in a 50% reduction in schedule duration compared with initial estimates.

In September 2020, construction paused while an archeological investigation focused on documenting family life in the late 18th century. Multiple artifacts were found and recorded before construction of the geothermal plant could resume.

Within the building footprint, crews excavated 30 ft below grade to create a foundation system of spread footings with 30 micropiles for additional support. The team carefully incorporated foundation components from the existing Shaw structure, using the elements as support for excavation features.

“From a budgeting perspective, the exterior wall was a huge driver.”
—Andrew Doyle, MCN Build Inc.

With foundations in place, the structural steel with slab on metal deck building took shape. The project was designed to use one tower crane—a Terex Peiner SK 575—with maximum load and boom instead of multiple mobile cranes for foundations, steel erection, slab on metal deck, shaft construction, exterior walls, roofing and all major material handling.

“We finished the pad pour for the crane on Christmas Eve,” recalls Michael Rooney, general superintendent at MCN Build. “We did what we needed to do to stay on track.”

Designed as a four-story structure rather than a more traditional two- or three-story school, Doyle says the project faced additional code requirements.

“All structural steel had to be spray fireproofed, which in a 190,000-sq-ft building is very extensive,” he says. “Any clear space is technically atrium space and that triggers additional smoke evacuation requirements.” 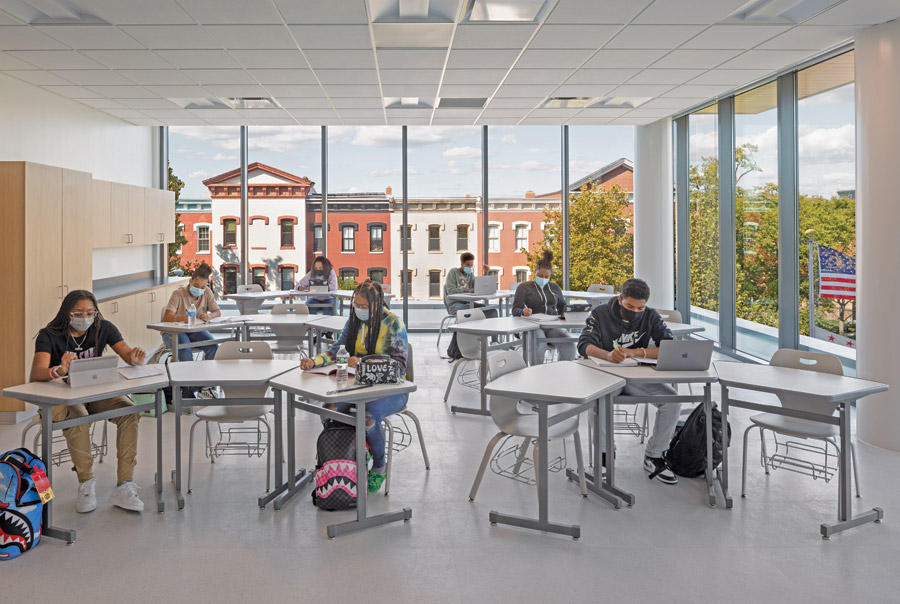 The building facade was a critical component in meeting the building’s performance goals. “From a budgeting perspective, the exterior wall was a huge driver,” Doyle says. “There was deep collaboration with the city and the architects on the exterior to ensure that it was aesthetically pleasing and high-performing.”

Maintaining the air barrier was critical, Rooney says. MCN Build hired a firm to test its work as construction progressed. DGS also had its own inspector to oversee the work. “There could be no penetration that couldn’t be recovered,” Rooney explains. “If you put a screw through a stud, you needed an air barrier over it. So you’re only as good as the guy putting it in. Even with the best plan, you end up with a screw or two that missed the stud and went through the sheeting. But in the end, we tested all four sides of the building and we were able to ensure that the quality was there.”

To help fit into the community, the facade mixes various shades of red that take cues from the brick buildings in the surrounding neighborhoods. In addition, a variety of fenestration and shading strategies were used, depending on a specific elevation’s orientation. While the windows on the north side were scaled to complement the neighborhood, the south facade focuses more on elements such as solar shading. Photovoltaic panels are also incorporated more heavily on the south facade.

“In contrast to a lot of net-zero buildings, we had a four-story building, which makes the roof surface smaller than most other net-zero schools,” says Sean O’Donnell, director and principal architect at Perkins Eastman. “The south facade needed to have photovoltaics in order to have enough of a footprint to achieve the targeted energy goals.”

Adding to the challenge, DGS bid the solar panel installation under a separate contract from the MCN-Perkins Eastman team. The team provided all necessary infrastructure for solar panels to be added after completion of the building.

The performance strategy not only focused on conserving resources, but also enhancing the indoor environment, including daylight, acoustics, thermal comfort and indoor air quality. 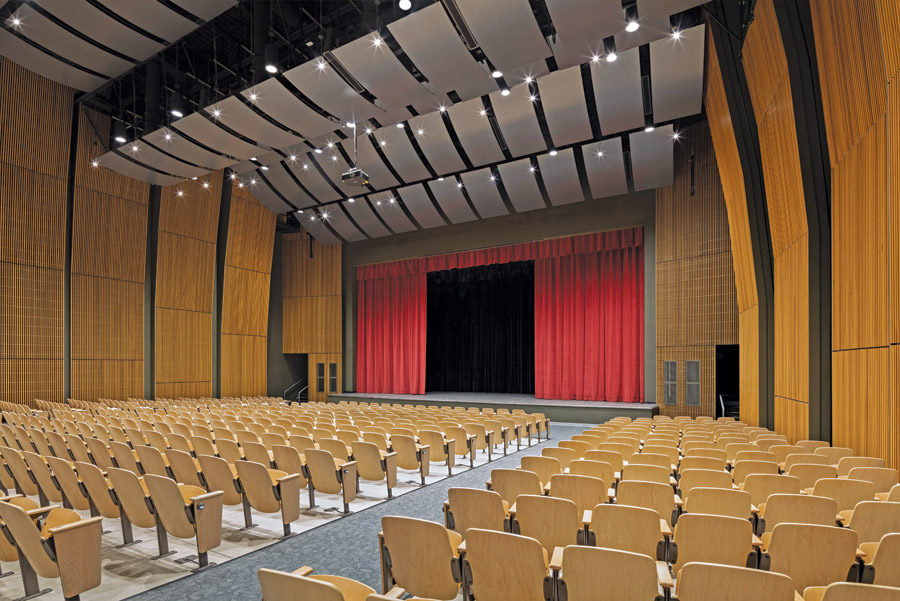 Although it’s a high school, the new building is designed to create a “collegiate ambiance,” providing a transitional environment to higher education. To create this setting, Perkins Eastman designed the Learning Commons to serve as a figurative heart of the school. The commons stack through a central atrium from ground floor to the top floor. Based on the collaborative aspects of a modern library, every level integrates with program spaces to provide centrally located, open spaces for study, socialization and collaboration.

“As you enter the building and you rise through the terraces of the Learning Commons ... it makes a connection to Banneker and his work.”
—Sean O’Donnell, Perkins Eastman

An accessible rooftop terrace dubbed Skyplace tops the commons. The space also helps honors the achievements of Benjamin Banneker. Among many other achievements, Banneker was an astronomer who played a key role in establishing the plan for Washington, D.C. The open-air roof terrace with views of the Washington Monument aims to provide perspective for students as they survey the city Banneker helped create.

Additionally, a metal screen above the entrance features an etched image of Banneker and signage through the facility honors his legacy.

“As you enter the building and you rise through the terraces of the Learning Commons of the building, it makes a connection to Banneker and his work,” O’Donnell says.

In addition to its aesthetics and performance goals, ENR MidAtlantic’s judges were impressed by the project’s safety record. The team saw no OSHA recordable incidents and no lost-time accidents during nearly 400,000 worker-hours. MCN offered free OSHA 30 training for selected workers showing an interest in safety. At the end of each week, the project team met with the safety team to identify potential candidates who had been observed working safely and performing well. After 90 days of safe work, workers were selected and trained. MCN says this strategy ultimately led to more safe workers on site who were willing to speak up and bring identified hazards to management. “Their safety had impressive numbers,” says one judge. “I especially liked that they were doing OSHA 30-hour training for workers who showed an extra interest in safety. That’s an initiative I have not seen.”

The project was completed on time and below budget in August 2021, in time to welcome students from all eight wards of the city to start the 2021-22 academic year. In addition to classrooms and the Learning Commons, the new school features a gym, a 600-seat auditorium, a cafeteria, a coffee shop, science labs, makerspaces, studios and performing art spaces. “The Banneker project was the culmination of a lot of [school projects] over the years for MCN,” Doyle says. “At the end of the day, the job was profitable, our subs did well and the testing proved everything was done successfully.”