The metamorphosis of an iconic, midcentury office building into a luxury hotel and residential complex has been a process decades in the making. Formerly known as the World Trade Center Tower, the 33-story cruciform waterfront skyscraper, built in 1968 and located at 2 Canal Street, was eyed for redevelopment for more than 20 years by the time this project finally got underway.

Given new life as the Four Seasons New Orleans Hotel and Private Residences, with 341 guest rooms and 92 condominiums and penthouses, the structure is listed on the National Historic Register and received the Excellence in Historic Preservation award from the Louisiana Landmarks Society. 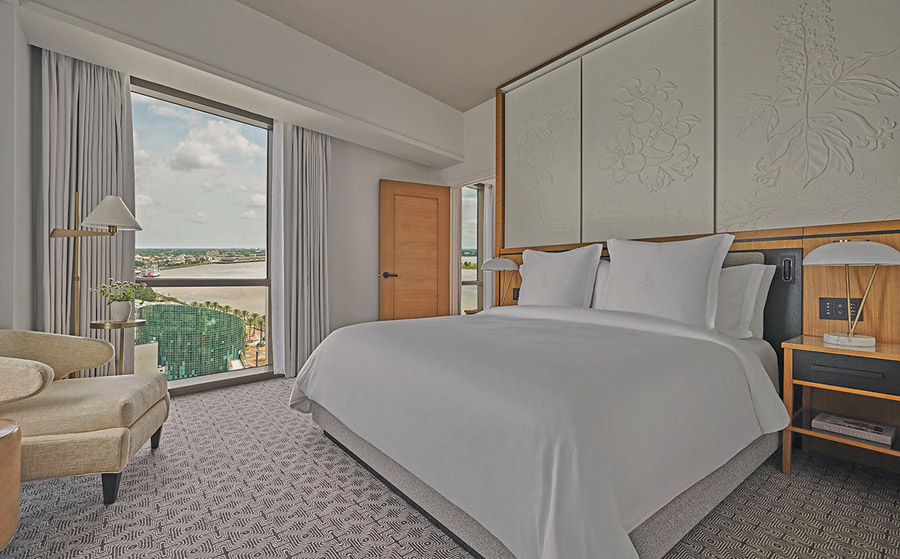 Acoustic isolation and each room’s sound transmission class (STC) rating was a major part of the inspection/modeling process.
Photo by Christian Horan Photography

The scope of work led by construction manager Woodward Tishman, a Joint Venture, entailed the extensive renovation and rehabilitation of the existing building as well as adding a five-story podium to accommodate 200,000 sq ft of meeting spaces, two restaurants, a pool and a spa. Two floors were added to the top of the existing building to create an indoor/outdoor observation deck that rises 350 ft above the riverfront and features a 360-degree panoramic view of the city of New Orleans. The aptly named Chandelier Bar is the centerpiece of the hotel lobby. A custom-made chandelier from the Czech Republic is suspended over the circular bar and catches the light of 15,000 crystals. To install this element, each strand was individually hung.
Photo by Christian Horan Photography

Tenants began leaving the city-owned World Trade Center after the 1980s oil bust, and the structure had sat vacant since 2011. Numerous proposals to redevelop the building had been submitted since the late 1990s, but the city awarded a contract to master developer Carpenter & Co. and co-developer Woodward Interests LLC in 2015. A lawsuit claiming the city’s bid process was faulty delayed the project until 2017, when district and state judges finally threw out the suit, enabling the developer to move ahead. Work finally began on the Four Seasons endeavor in July 2018.

Exterior restorations had to comply with historic guidelines, which dictated that the tower shape, exterior envelope and the circular top of the building as well as the structure’s winged roof and rooftop antenna were defining elements that needed to be preserved.

Another original design component is the iconic louvers, or sunshades. The anodized finish on the louvers was so corroded that the team brought on subcontractor Glass Zinsel JV to dismantle 1,164 of the shades individually, remove the existing anodized finish and corrosion, and re-anodize them to match the original finish. These were restored on the lower floors and the end windows of each wing while high-performance curtain wall was integrated on the entire exterior, providing significant energy efficiency while maintaining the overall profile of the landmarked building, according to the team. Crews reinstalled a total of 324 louvers to maintain this historical element. The designer’s vision of floor-to-ceiling marble bathrooms in the guest rooms required a trip to Carrara, Italy, to select and approve the mix of stone. The approved marble was then immediately packaged and air-freighted to the project for installation in the model guest rooms.
Photo by Christian Horan Photography

Another challenge for lead design firm CambridgeSeven was adding the new hotel podium space that would engage with and surround the base of the tower, explains Yongjoo Kim, principal for the firm.

“The new addition could not diminish the historical details of the tower itself and, due to National Park Service and State Office of Historic Preservation guidelines, the addition must be placed so that the original tower would still be seen touching the ground around its historic lobby,” he says. Temporary bracing during construction offered structural stability while a tower crane was in place.
Photo courtesy of Woodword Engineering Group

Adding to the complexity was the fact that the new podium’s location was over three active railroad tracks, one of which had to remain in service throughout construction.

“The new podium was prominently located to the south, east and north of the tower itself. It faces onto the river-facing side of the tower’s base overlooking a public plaza,” Kim says. “The design solution utilized a semicircular form that wraps two-thirds of the tower base, softens the edge condition between the tower face and the podium and provides an expansive curvilinear surface opening on to the plaza and river.”

This way, the tower comes to the ground in its historic form along the street edge with the podium wings outstretched to welcome visitors, he adds.

In addition, the use of highly detailed acoustical solutions at the glass curtain wall, floor assembly and guest room windows were necessary to achieve a high level of sound isolation from the active railroad track below the main conference and event space facilities, Kim explains. 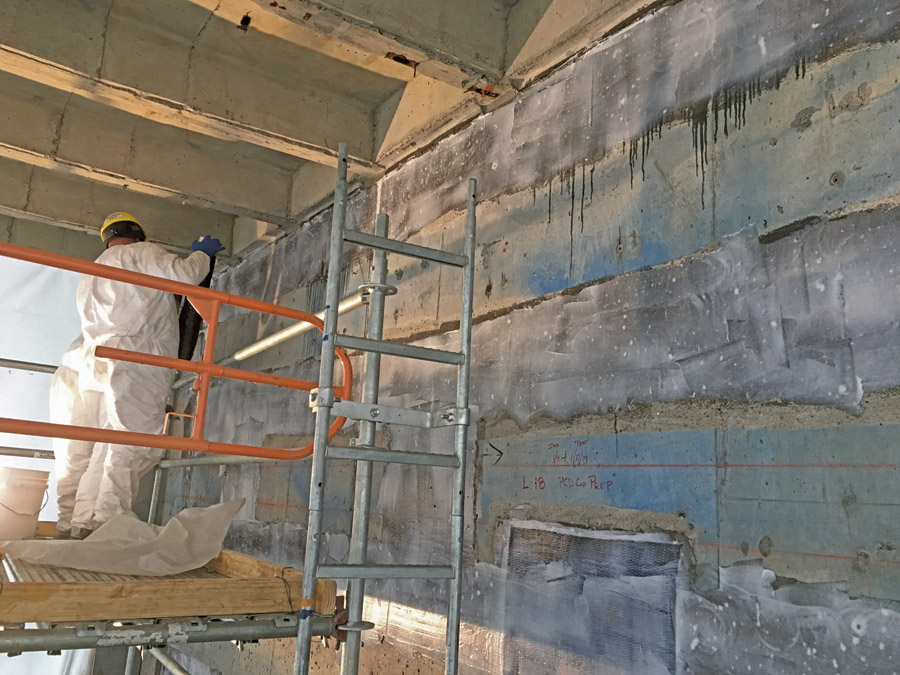 Keeping the historic preservation requirements in mind also meant there were limitations on the project’s design and “many historic elements have to be preserved even at the expense of project efficiency,” Nicholas Mannix, manager of engineering for Woodward Engineering Group, told ENR in 2020. He noted that while it would have been easier to remove the steel rotunda at the top of the building and completely reconstruct it to meet the project’s needs, the team instead “took great pains to modify the existing steel framing per historic requirements.” 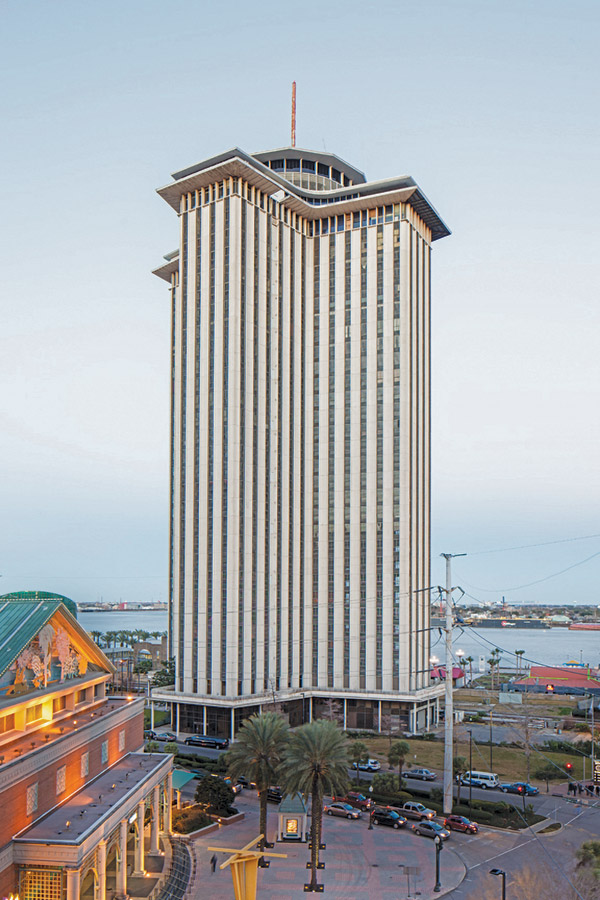 The World Trade Center building is a 33-story cruciform-shaped skyscraper listed on the National Register of Historic Places. This “before” photo was taken in 2015.
Photo courtesy of Woodward

Before renovations could begin, project leaders first had to determine how to execute demolition and move materials within a 33-story tower without vertical transportation. The solution was a common hoisting platform, or CHP—a concept of the team’s national JV partner AECOM Tishman—which ran materials and personnel from Floors 1 through 32 from November 2018 through March 2021. The CHP had not been used in New Orleans previously, according to Woodward. The team located the hoist so that it would directly tie into a single stack of units, minimizing disruption to the interior build-out sequence and restoration of historic precast panels while also increasing productivity to both interior guest rooms and the building’s envelope.

Early on, project leaders realized that reconfiguring the building’s elevators could potentially weaken the structure. To solve this, the team turned to RWDI Consulting Engineers and Scientists of Toronto to perform scale-model tunnel testing on the building, findings of which Boston-based engineer LeMessurier then used in its lateral analysis of the building. Structural Preservation Systems then joined the effort to reinforce the building’s core with a concrete enlargement system.

The podium sweeps around the tower with a curved geometry terminating at the entry and arrival plaza. The hotel ballroom is located behind the glass wall overlooking the city and the arrivals court.
Photo courtesy of CambridgeSeven

As explained to ENR in 2020, this involved enlarging concrete in varying amounts on existing walls outside of the shafts and adding steel reinforcing plates with carbon fiber reinforcement within the shafts. Contractor crews reinforced 2,500 sq ft of structure surface with carbon fiber, which all had to be done while also maintaining clearances in those elevator shafts as well as the historical integrity of those shafts, Mannix explained.

With an existing building in place, the project team ran into plenty of unexpected situations and conditions. Two years of historic river levels in 2018 and 2019, for example, resulted in stop work bans from the U.S. Army Corps of Engineers and New Orleans Levee Board that would have resulted in more than 200 lost days. However, structural engineer Woodward Engineering Group and a team of consultants were able to obtain variances and permit waivers to keep work progressing.

Meanwhile, several building deficiencies presented themselves during demolition and other construction activities, resulting in additions to both the budget and schedule. These included unrealized differential settlement and the discovery of deteriorated steel on the top floors of the building. A comprehensive effort across the entire project team managed to resolve these situations.

A dramatic, cantilevered glass and steel canopy defines the arrivals courtyard and guides guests to both the hotel and residential entries.
Photo courtesy of CambridgeSeven

A rigorous Disadvantaged Business Enterprises (DBE) program resulted in 38% DBE participation, surpassing the city’s goal of 35%. With more than $140 million going to DBE firms, the team’s efforts illustrate the positive impact of small business programs, says one contractor who worked on the project.

“Woodward enabled a partnership between VPG and a large structural contractor, Structural Preservation. Through this partnership we’ve not only completed a $2-million structural reinforcement services contract, but we’ve also learned a new scope of work to add to our list of services,” wrote Michael Merideth, CEO of VPG Enterprise, a certified DBE and 8A Business, in a testimonial in August 2020. “Through our working relationship with Woodward, we have experienced growth in our business, expanded our scope of services and have added one of the city’s largest developments to our portfolio of experience.”

Across 3.52 million worker-hours, the team achieved an OSHA recordable incident rate of 0.96 and a lost-time accident rate of 0.11, and completed the extensive project in May 2022.