In uncertain times, Rycon Construction Inc. has found strength in its stability. With a roster of long-tenured employees and a pipeline of work provided through repeat clients, Rycon overcame the business perils of the pandemic and emerged a stronger company, positioned to grow in the coming years. Despite working in some unsteady market sectors that were hit hard in recent years—such as retail and office—the diversity of its work helped keep the company balanced. An employee-owned company, Rycon’s staff of more than 700 is invested in growing the company well beyond its Pittsburgh headquarters. Given its recent performance and future potential, ENR Mid-Atlantic has named Rycon Construction its Contractor of the Year.

Like most construction firms, Rycon was not immune from the pandemic’s challenges. With a book of work that included developer projects in retail, hospitality and commercial offices, Rycon felt the pinch. As sites were shut down and projects delayed, the company saw its MidAtlantic regional revenue tumble to about $251 million in 2020 from $373 million in 2019. John Sabatos, Rycon president and COO, admits it was a tough time financially for the company. “We had a large national client with tenants that weren’t paying rent,” he says. “For a year, we had a long recovery payment plan with them. They paid what they owed us, but that was scary.” 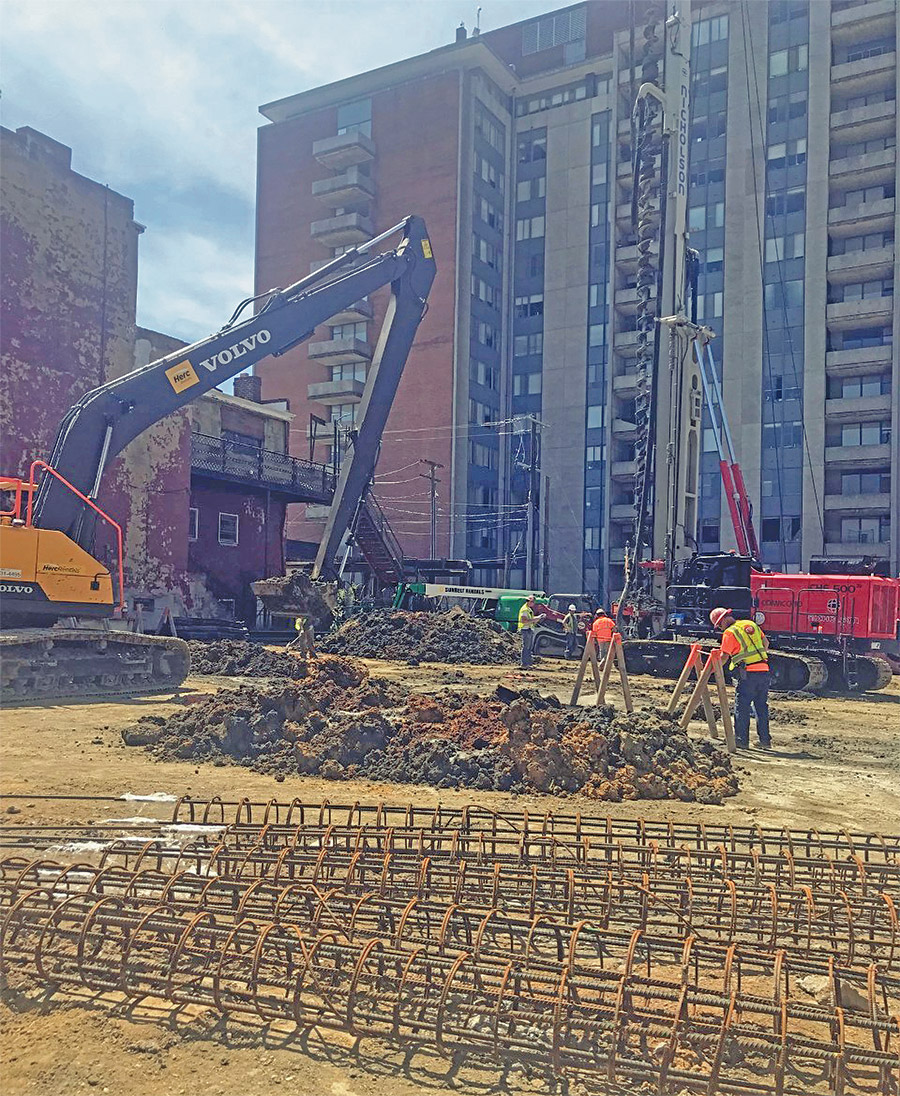 When completed, the Parc View at Commonwealth in Richmond, Va., will include a 16-story, 260,000-sq-ft mixed-use building with 168 residential units.
Photo courtesy of Rycon Construction Inc.

A year later, Rycon’s path forward was more certain. By sticking with existing clients through tough times and leaning more on customers that serve steady sectors like multifamily residential, higher education and aviation, the company rebounded in 2021. Rycon ranks No. 29 on this year’s ENR MidAtlantic Top Contractor list with $308.5 million in regional revenue, a 23% increase from last year when the firm ranked No. 35.

With a reshuffle of its market mix, Sabatos says Rycon is on pace to see revenue jump by double digits again in 2022. “We’ve been fortunate to have a lot of loyal clients who take care of us,” Sabatos says, noting that repeat customers make up more than 85% of Rycon’s annual revenue, on average.

“It’s hard to work alone at the top. Everyone needs someone to share the success or commiserate with when needed.”
—John Sabatos, President & COO, Rycon Construction Inc.

That loyalty goes both ways. Oxford Development Co., which has worked with Rycon since the construction firm was founded in 1989, has turned to the company on more than 400 projects over the years in sectors like multifamily, office, food service and hospitality. Although Oxford does bid work to other companies, Scott Pollock, Oxford senior vice president of development, says Rycon often finds the way to make it the developer’s first choice. “We don’t give it to them—they earn it,” Pollock says. “They work harder than we do to maintain this relationship. It’s not what we’ve done—it’s what they’ve continued to do.” 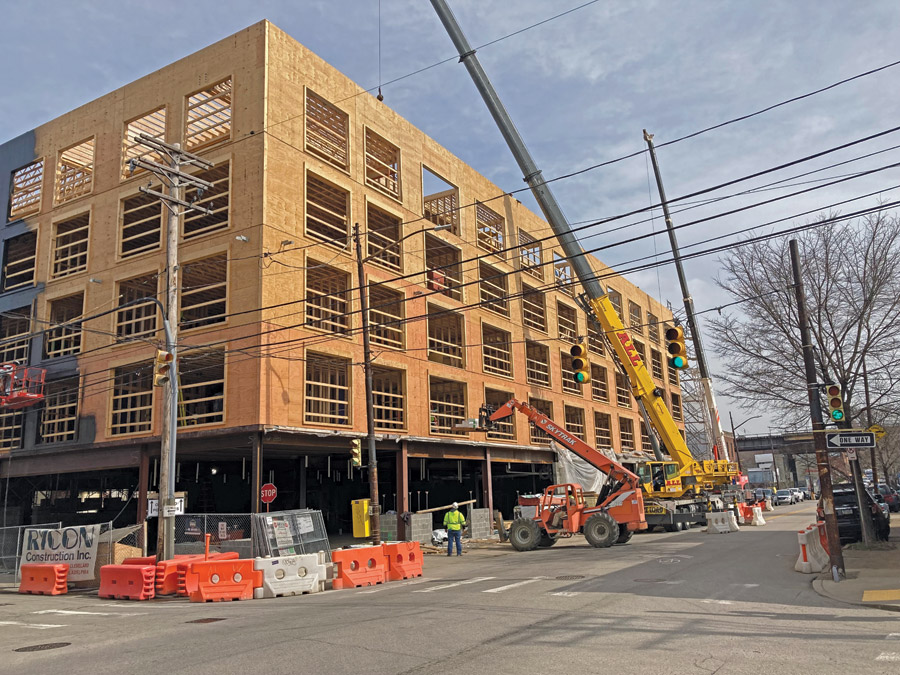 Pollock says that, at a time of labor shortages and uncertain supply chains, its stable relationship with Rycon has made all the difference in working to advance projects. “We do a lot of CM at-risk with a [guaranteed maximum price] delivery,” he says. “So we work closely together in the preconstruction process and figure out how to best buy construction in these challenging times. That’s what we value the most—their ability to work with us and offer a GMP within the scope and cost that we envision for the project.”

Although repeat work is the bulk of its business, Rycon continues to pursue new clients and new markets. Recently, the company found a niche in the booming cannabis sector, building dispensaries and grow facilities. Recently, the company completed the $690,000 Liberty Cannabis Dispensary in Cranberry Township, Pa., converting a former restaurant into a new 3,300-sq-ft dispensary.

Sabatos says Rycon has been able to leverage its retail background for dispensary work while employing capabilities gleaned from warehouse and hospital projects to build grow facilities. “These are surprisingly complicated facilities with sophisticated HVAC, plumbing, lighting and electrical,” he says. “It’s a growing market, and we hope to help them grow.”

Much of Rycon’s own growth will come from geographic expansion. Since 2015, the company has expanded from one office, in Pittsburgh, to eight offices, spread across the Eastern and Southern U.S. Last year, Rycon opened a Washington, D.C., office, its third MidAtlantic location alongside Pittsburgh and Philadelphia.

Sabatos says Pittsburgh is a “slow and steady market” compared with other areas, providing a solid base of business that contributes more than half of Rycon’s revenue. However, he sees geographic expansion as its best opportunity to grow the company. Within the past year, it has added offices in Houston and Fort Myers, Fla.

Although clients sometimes ask Rycon to perform work outside of its current service area, Sabatos says the company is more focused on opportunities provided by potential future employees when considering new markets. “We don’t target an area, we target good people,” he says. “We’re looking for good leaders who are ingrained in their markets.”

Sabatos says the company likes to find two-person leadership teams to lead its new offices. It’s a strategy that harkens back to Rycon’s roots in 1989, when Todd Dominick, a civil engineer, teamed up with Bill Taylor, a union carpenter superintendent, to found the firm.

“It’s hard to work alone at the top,” Sabatos says. “Everyone needs someone to share the success or commiserate with when needed.” 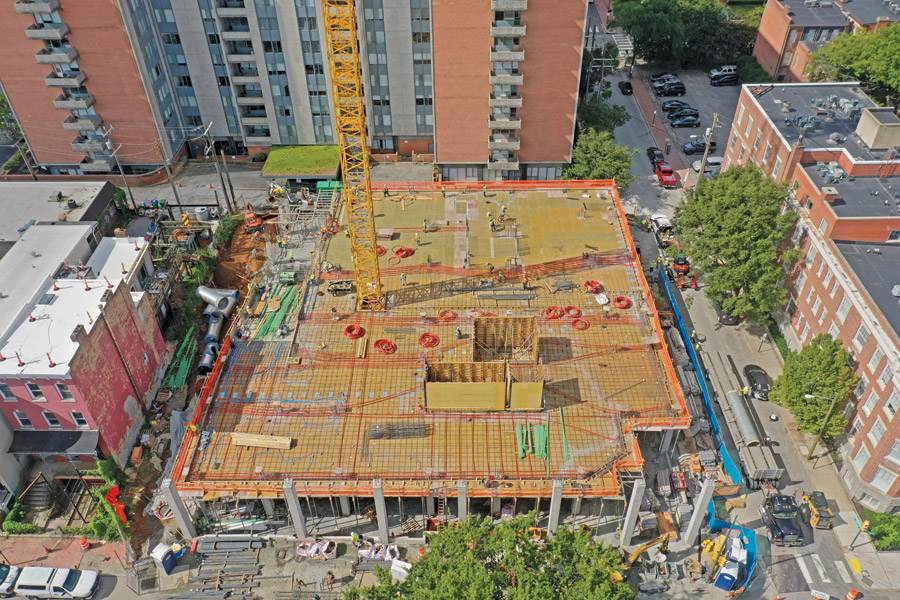 In 2016, Rycon acquired Acies Construction Group [ACG], based in Fort Lauderdale, Fla., and led by founders Kevin Montez and Simon Rodriguez. At that point, ACG had been in business for nine years and had more than $100 million of work in place in the retail, health care and office markets. Now serving as Rycon’s base in the South, that office is on track to complete $250 million in work this year, Sabatos says.

That acquisition also laid the path for future leadership. Effective Jan. 1, 2023, Dominick will retire and Sabatos will take the helm as CEO. Montez will become COO.

In other regions, Paul Thomann, president of the Atlanta office, was recently named chief business development officer for the firm nationally.

Sabatos says the company’s overall strength is built on the stability of its long-tenured staff. In addition to its executive and management personnel, the firm also employs field staff for self-performed work in carpentry, concrete and drywall. The company’s roots were in carpentry—founder Bill Taylor was a union carpenter superintendent.

Today, the company is one of the largest employers of carpenters in Western Pennsylvania. “We’ve always stressed the importance of our supers,” Sabatos says. “Unlike other companies, they have a lot of sway here. Many of our supers started as foremen and most have been here more than 10 years. That’s a tribute to Bill, who started it that way and we still think like that.”

As the company has grown, Sabatos says the need for more self-perform capabilities has grown as well. “There just aren’t enough concrete subs out there to perform the work,” he says. “Bigger companies have to self-perform that work.”

Although self-perform work entails taking on more risk in-house, Sabatos says the potential profitability and the improved certainty of labor capacity makes it worth it. The company aims to expand those capabilities in the coming years nationwide, he says.

Rycon is providing preconstruction and construction services for the $63-million, 16-story, 260,000-sq-ft mixed-use building. The cast-in-place concrete structure includes 168 units with 509 beds and consists of a podium, residential tower and penthouse. The two-level podium includes above-ground parking, retail and amenities. The tower will consist of 13 levels of apartments. The penthouse will have interior and exterior amenity spaces and open-air mechanical spaces.

Rycon was successful low bidder on two bid packages in the $1.4-billion terminal modernization program. The company’s $133.4 million in work includes a five-story garage with rental car parking and facilities. It also includes surface parking with 2,700 stalls and additional sitework. A partnership with the Occupational Safety and Health Administration encourages cooperation among all parties to foster safe work. Rycon also appears to be the low bidder on a third general contracting airport package worth $103.2 million.

Rycon is an employee-owned company and its workers are invested in the firm’s success. Before 2017, Sabatos and Dominick were the company’s co-owners. But when they drew up succession plans, the duo decided to sell Rycon to the employees through an employee stock ownership program [ESOP]. Sabatos says that many contractors in Pittsburgh are family companies, where ownership is passed from generation to generation. But Rycon’s owners felt an ESOP was the right choice for their company. “The strength of Rycon is the people,” he says. “We wanted to let the people keep it.”

Although the company isn’t family owned, it retains a family feel, says Kenya Finn, an assistant project manager at Rycon. “The structure is more like a family than just being an employee here,” she says. “We definitely get a lot of new hires, but it still has that close-knit family feel.” 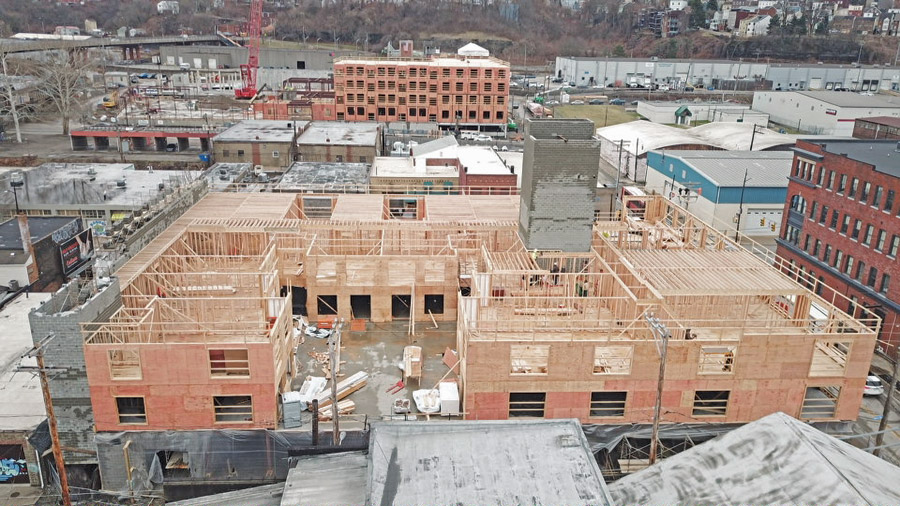 Finn says those relationships have helped her succeed since joining the firm four years ago. She has advanced from assistant project engineer to assistant project manager. Finn currently works on project teams at the University of Pittsburgh and Duquesne University and will run her first job this year, at Carnegie Mellon University [CMU]. “That family atmosphere is good to have when you’re just starting out,” she says. “I think that kind of closeness played a part in my success here. You don’t feel like you can’t ask a question. Everyone is there to help.”

Rycon is also helping small construction companies grow and advance in the industry. It participates in a mentor-protégé program and is sponsoring RWIV Construction—a small minority-owned painting contractor in Pittsburgh—for two years. Rob Chambers, CEO of RWIV, has been in business for 11 years, but by working with Rycon, he says he has new opportunities to expand. “I feel like they want to see me grow,” Chambers says. “I’ve worked with other contractors in the past, but none like Rycon. They are open and willing to see how they can help me grow.”

Looking ahead, Sabatos sees continued growth in the coming years with solid backlog through 2023. Further into the future, Sabatos says the company is well-positioned to stay on a continued growth path. But long after he retires, Sabatos hopes the firm stays true to its tagline: Employee-owned. Client driven.

“I’d never want us to be a big faceless company,” he says. “Employees can come into my office any time. Clients can reach out to me any time. I want to make sure that continues to happen even when I’m gone. We want to be entrepreneurial, but we don’t want to lose that connection.”