Vaccines to prevent or ease the symptoms of COVID-19 were eagerly awaited in 2020 during the heart of the public health crisis. A contract development and manufacturing organization in Grand Rapids, Mich., was called upon to make the vaccines right at the same time that the firm’s new injectable filling facility was opening.

Increased demand from other customers only added to the need for more space at Grand River Aseptic Manufacturing (GRAM), which fills biologics, small molecules and vaccines used to prevent and treat a wide range of illnesses.

The company, which provides sterile parenteral development, manufacturing, testing and regulatory filling support for the life sciences and pharmaceutical industries, opened a $110-million injectable facility in June 2020 and now is in the second phase of building out the 90,000-sq-ft structure.

GRAM fills injectables with compounded medications containing a sterile drug that has therapeutic actions and is administered in the body through needles and syringes. Parenteral refers to medicinal solutions administered somewhere in the body other than the mouth or alimentary canal, including injections or infusions that are intravenous, subcutaneous or intramuscular. 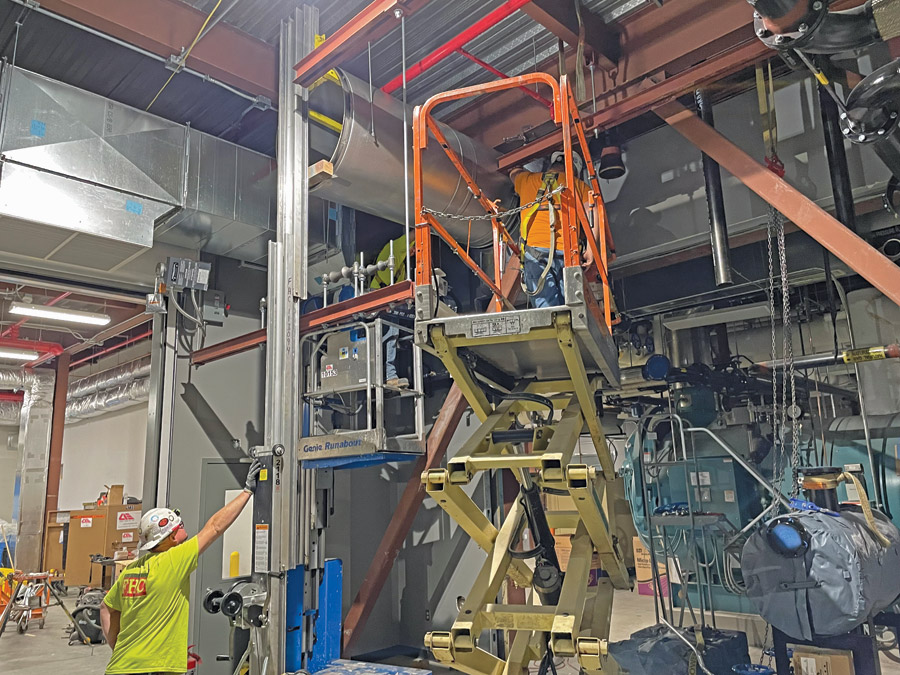 GRAM was founded in 2010 with a handful of employees and has grown to more than 400 workers in multiple Grand Rapids facilities. The company’s expansion at 524 Butterworth St. SW was divided into three phases. GRAM hired CRB of St. Louis, which handles construction projects for vaccine and critical therapy manufacturers, for design-build and construction management.

The first phase started in 2018 to develop the site and build the aseptic pharmaceutical manufacturing structure, which brought some unexpected challenges.

“Soil studies showed that the site had voids underground due to gypsum mines from years ago,” says John Wichelt, GRAM vice president of client pharmaceutical services. “There were voids identified as deep as 100 feet. We pumped concrete to fill the voids and then installed concrete piers to stabilize the building.”

The project also entailed adding about $5 million of clean room space, which was done safely by completely separating the clean room that was performing current filling activities from the expansion space.

“Maintaining the isolation of the plenum space air was one of the challenges,” Wichelt says. “CRB separated construction air from the clean room space by installing a plenum divider.” 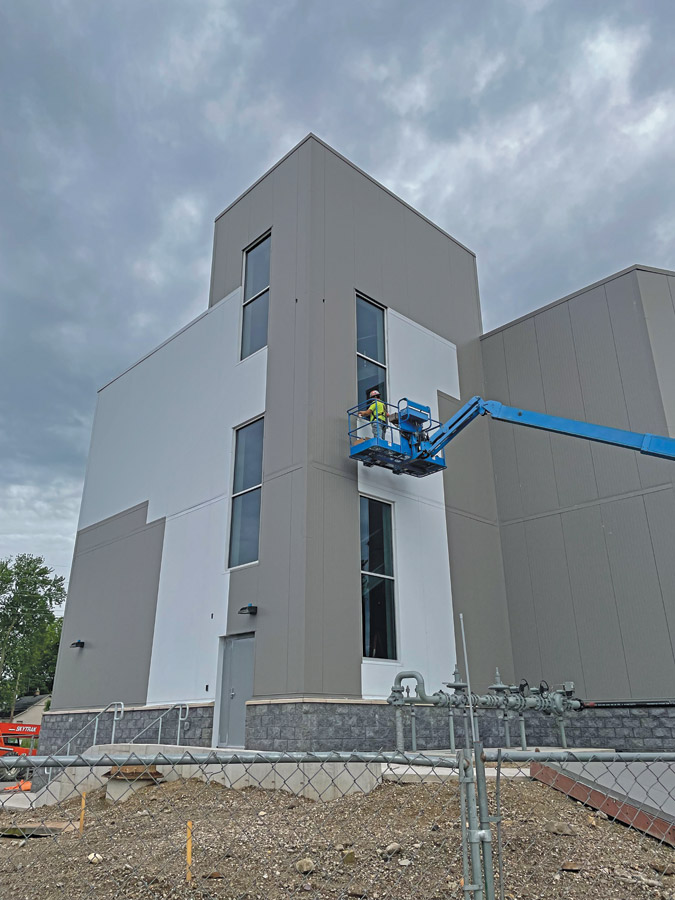 The expanded facility will have a total of four lines for filling vaccines and other medications.
Photo courtesy of CRB

A portion of the building’s first floor was used for filling a COVID-19 vaccine order while construction advanced in 2021 into the second phase on the second-floor addition.

“At the time we started, this facility was manufacturing a COVID-19 vaccine, so we had a lot of eyes on this project,” says Samvid Bhansali, project manager for CRB. “We had to phase the construction into multiple stages to strategically construct and not impact any active operations.”

As part of Phase 2, the company installed two new filling lines and ordered another, which brings the total to four.

“The coordination of equipment delivery has brought additional challenges,” says Bhansali. “Typically, clients like to move in equipment and have the walls and ceilings built around it. In this case, we left walls and ceilings open so we could move the equipment in as we completed the facility build.”

Wichelt adds that the team has monitored supply chain delays throughout the project. “It means constantly calling vendors to make sure you are on schedule and coming up with work-arounds,” he says.

Due to delays with electrical components, CRB also installed temporary power panels and junction boxes so the filling line and ancillary equipment that had arrived could be tested.

A removable wall was used for installing utility equipment, which became a bigger part of the project than originally anticipated. “We pivoted in the middle of this project and said, ‘Let’s get all of the utilities designed for the future,’” Wichelt says.

“We cut out a 12-square-foot by 12-square-foot section of wall for moving the boilers in,” Bhansali says. “This was originally designed as a standard insulated metal panel, but as GRAM decided to add the roughly 18,000-pound-each boilers for future capacity, we redesigned it to make the panels removable for [the moving in] and serviceability of the boilers.” 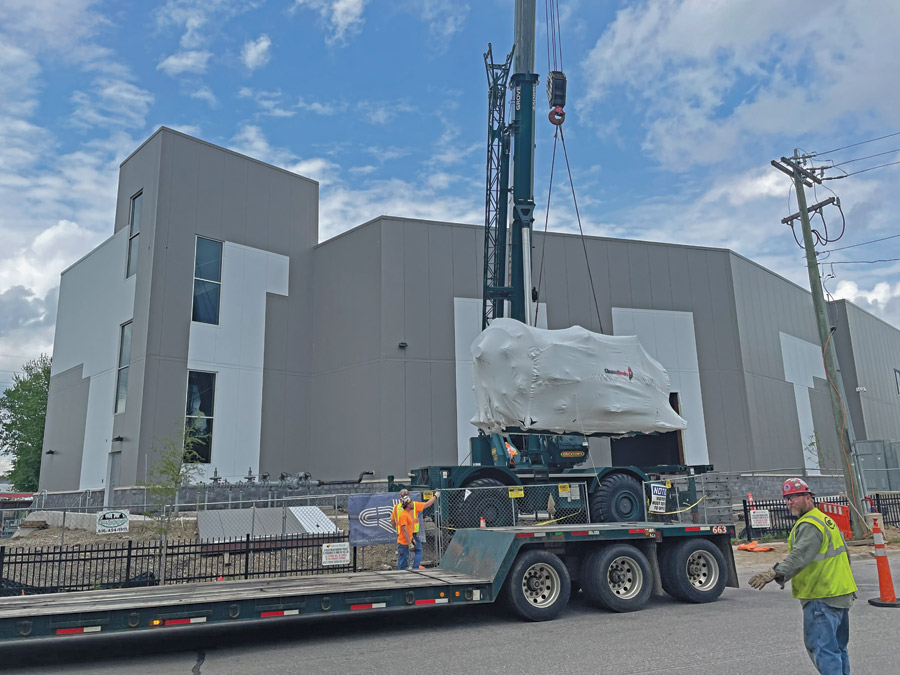 Boilers weighing 18,000 lb each were moved into the facility to accommodate future utility needs.
Photo courtesy of CRB

Bhansali says CRB’s ONEsolution integrated project delivery, where the design and construction teams work together from Day 1, was an effective way to manage the project, particularly given an accelerated construction schedule. “We were able to release early civil, structural and exterior-skin design packages to get long-lead steel, IMPs and roofing materials on order while the design for interior architectural, mechanical and electrical was still in progress,” he says.

The project’s complexities were also eased by having the engineers, subcontractors and vendors use cloud-based building information modeling. “We were all collaborating in a centralized 3D model since Day 1,” Bhansali says. “It helped us plan to avoid unforeseen field changes, significantly cut down coordination time and reduced rework.”

The higher level of BIM detail allowed CRB’s trade partners Andy Egan Co. and Buist Electric to use the model for fabrication of piping, ductwork, conduits and cable trays.

Phase 2 is expected to be complete this fall. The next phase will start later this year and be completed in 2024. Phase 3 includes installation of GRAM’s eight-head fill line and a third floor dedicated to mechanical and utilities to support the filling operations.