Many of the Midwest’s top specialty contractors performed better than expected despite the ongoing pandemic. The group as a whole reported regional revenue of  $5.48 billion in 2020.

Firms are adding new services, responding to demand in smaller markets and communicating with customers about industrywide challenges that include material delays, labor shortages and escalating prices.

The 2021 list is made up of 42 specialty contractors from 11 states who responded to ENR Midwest’s Top Specialty Contractors survey, a slightly smaller group than the 48 who filled out last year’s survey and reported a total of $7.29 billion in regional revenue.

Specialty contractors took on a wide range of projects including installing HVAC and piping in a hospital bed tower in Chicago, building a temporary pool for time trials for U.S. Olympic Team swimmers in Omaha and working on a distillery in Kentucky and on bridges spanning rivers in Missouri, Ohio and elsewhere.

The top spot on the list was again claimed by MasTec Inc., which reported $881 million in regional revenue, putting it far ahead of the rest of the pack.
It was followed by Faith Technologies Inc. of Menasha, Wis., with $389 million in revenue. The Helm Group in Freeport, Ill., was third with nearly $342 million in revenue, while Detroit-based Motor City Electric was fourth with $331 million (and was named ENR Midwest Specialty Contractor of the Year). Aldridge Electric of Libertyville, Ill., placed fifth with $320.5 million in revenue.

J.F. Ahern, a pipe fabrication, mechanical, fire protection and building automation specialty contractor in Fond du Lac, Wis., had $312 million in revenue and was sixth on the list. Tripp Ahern, the firm’s chairman and CEO, attributes his company’s strong year to the overall economy.

“We see a lot of people in different vertical markets continuing to make significant investment in their facilities in areas such as health care, food and beverage, data centers and various manufacturing facilities,” he says. “In spite of COVID-19, and in spite of escalating material prices, people continue to build new facilities and invest in current facilities.”

While demand has been good, the rising cost of materials has been a concern.

“We’ve had to deal with some pretty extreme price escalations in steel, copper and PVC,” he says.

The company is coping by “doing our best to predict where future prices are going when we put our bids together. We’re also working very closely with our customers so they understand on a week-to-week basis where we see pricing going in the future,” says Ahern, who believes prices will eventually stabilize.
“We’re somewhat confident that things will level off, although it may take a while for prices to come back down to something approaching pre-pandemic levels,” he says.

“It seemed like owners were sensing some pending inflation and had a lot of projects to bid in 2020 and early 2021,” he says. “It seemed like there were a lot of opportunities for us in all of the markets we work in.”

He says procurement delays and material prices affected some timelines.

“We’ve had a few projects where the end is accelerated,” he says. “We did more work in the last month than what we normally would plan because the equipment came late and a few deadlines got pushed a little bit.” 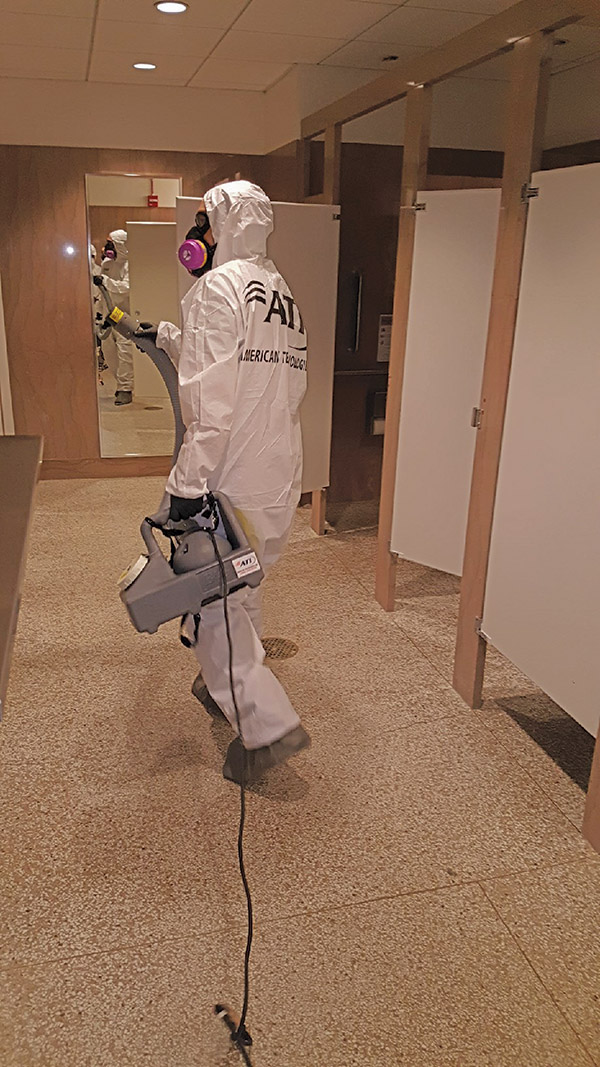 A labor shortage also has been a challenge.

“Workforce availability has been an issue on some projects and with some trades,” he says. “We’ve worked more overtime than we normally do.”

The company coped by moving some fabrication done on jobsites to the firm’s facilities because it is tougher to get labor on jobsites, he says.

The $32-million project included installation of pre-insulated chilled water, steam and condensate passing equipment under a street and tying into existing utilities from a central plant.

“It seemed like owners were sensing some pending inflation and had a lot of projects to bid in 2020 and early 2021.”
—Brian Helm, President & CEO, Helm Group

“Prefabrication was used heavily on this project to reduce onsite labor and reduce waste,” Helm says.

The company, which opened an office in 2020 in Lenexa, Kan., saw demand in smaller markets.

“We’re seeing a lot of growth in Iowa, Nebraska, Kansas and Illinois—not quite as much in Chicago as we’ve seen in the last 18 months,” he says. “But the other areas where we work will more than make up for what looks like what might be a little slower (business) in Chicago.”

He attributes demand in smaller markets to federal government stimulus money and to projects that had been delayed by the pandemic finally moving forward.

Brian Davis, executive regional director ATI Restoration LLC, which has an office in Naperville, Ill., says his company also had a good year in 2020.
ATI Restoration placed 33rd on the list and posted $28.7 million in revenue.

One way the company increased performance was by adding sanitation to their range of services, which  include restoration and reconstruction from fire, smoke and water damage. 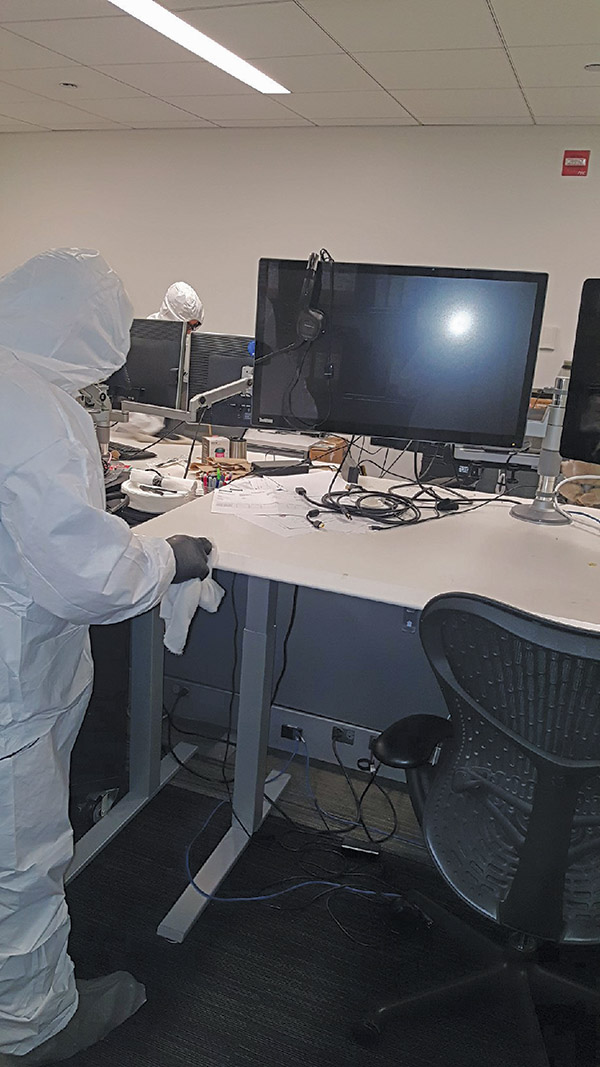 ATI has a hospital group that was able to take its practices and translate them into residential and commercial property.
Photo courtesy of ATI Restoration

The addition increased ATI’s customer base, but the company had to move quickly to capitalize on demand for sanitation caused by the pandemic.
“We have a hospital group that was able to take practices from the hospitals and translate them into residential and commercial properties to make sure they are sanitized the right way,” he says.

One of their large sanitation projects was sanitizing the 4-million-sq-ft Merchandise Mart in Chicago.

Richard Hughes, general manager of Hughes Powers Garay Co. of Des Plaines, Ill., says his company’s volume has been down slightly, which he attributes to the pandemic.

The company, which designs and builds clean, particle-free rooms for the pharmaceutical and semiconductor industry, reported $2 million in revenue and placed 42nd on the list.

“We do a lot of our clean rooms in hospital pharmacies, and that work kind of dried up because the hospitals didn’t want outside contractors in the hospitals,” he says.

He expects business to increase as hospitals allow outside workers to return.

The company also has seen material delays, which has led to extending lead times on some projects.

“One of our vendors has lead times of six months where they used to be two months. That impacts us quite a bit,” he says.

The company is discussing delays with customers and vendors. 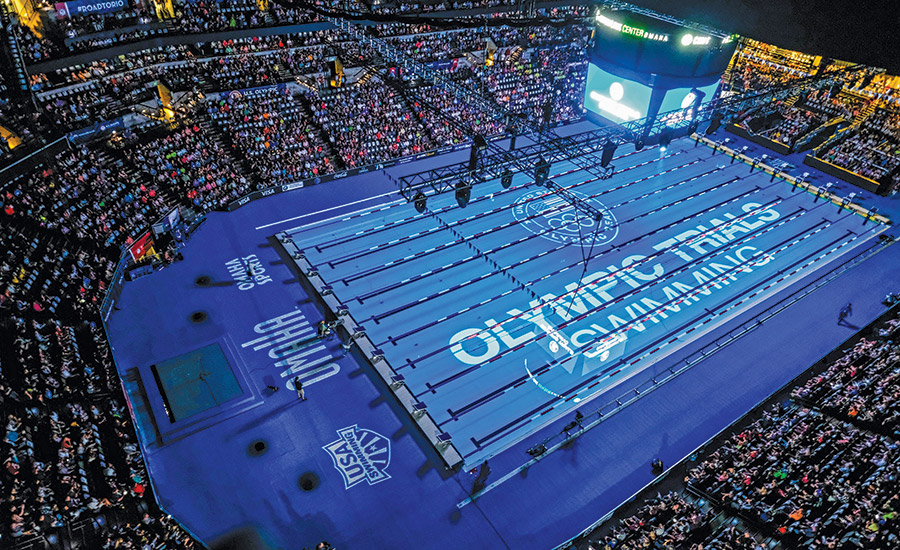 U.S. Olympic Team swimmers qualified for the Tokyo games in a temporary pool built by Helm Mechanical on the floor of the CHI Health Arena in Omaha. It was used for the time trials.
Photo courtesy of Helm Group

“For one of our clients, I just warned them. ‘If you want to do this project in December, it’s not going to happen unless you give us the order now,’” he says.

Hughes also has considered other vendors.

“I told one vendor that has the real long lead time, ‘I’ll be frank with you. I’m going to have to pursue a different vendor because of your lead times,’” Hughes says. “Vendors don’t want to hear it. But they understand. I will switch vendors because of lead time.”

Hughes says his company took advantage of the paycheck protection loans offered during the pandemic and didn’t lay anyone off.

While there will always be business challenges, Hughes and the others are hopeful for the future.

“The economy feels strong from where we sit,” Ahern says. “Certainly low interest rates are helping a great deal.”

Ahern and others are keeping an eye on any potential problems. “I think in terms of things that could throw a wrench in the economy, there are the obvious things like inflation and higher interest rates,” Ahern says. “But as long as inflation is kept somewhat under control and interest rates remain relatively low, we’re relatively optimistic about where things will continue to move.”