One of the most breathtaking experiences in Reno, Nev., has nothing to do with nearby Lake Tahoe or winning a casino jackpot. Instead, it involves taking Interstate 80 from the west side of town to the south and navigating the infamous “Spaghetti Bowl” interchange.

Eastbound-to-southbound traffic routinely backs up onto I-80, and stuck motorists get close-up views of big-rig trucks roaring by on their way from California to points east. The long-recognized hazard—it came up frequently in transportation town hall meetings almost a decade ago—is the first need being addressed in a nearly 20-year highway improvement effort through central Reno.

The Spaghetti Bowl project started in 2020, and over five phases it will rebuild 12 miles of highway leading into and out of Reno and the interchange linking I-80 with Interstate 580/U.S. Highway 395 at the east end of downtown.

The project’s $223-million first phase is funded primarily by the state, with the Regional Transportation Commission of Washoe County contributing $30 million. That price includes a $181-million design-build contract for construction as well as expenses for engineering and securing rights-of-way.

“It does somewhat temporarily improve the capacity, but ultimately we are not done yet.”
— Alma Piceno-Ramirez, Resident Engineer, NDOT

The initial phase, which continues through this year, is dubbed Spaghetti Bowl Xpress to reflect the urgency transportation officials put on it. The Nevada Dept. of Transportation, lead agency for the project, warns that the eastbound approach has a dangerously high accident rate, and the project manager in charge of addressing that risk uses the word “intimidating” to describe driving through it.

“I always look to avoid it,” says NDOT project manager Robert Vrooman. “You never really know when the sudden stops will occur.”

Currently, more than 250,000 vehicles a day use the Spaghetti Bowl, including 28,000 that head south from eastbound I-80, and “the ramp is always at a standstill,” says Alma Piceno-Ramirez, an NDOT resident engineer. “It doesn’t have a morning rush hour—expect it to be backed up all day long.”

The 50-year-old interchange, Northern Nevada’s busiest, opened when the Reno metro area had a population under 115,000. Today, the area’s population is nearing a half million and is expected to top 600,000 in the next two decades, potentially increasing traffic delays at the interchange by 50%. 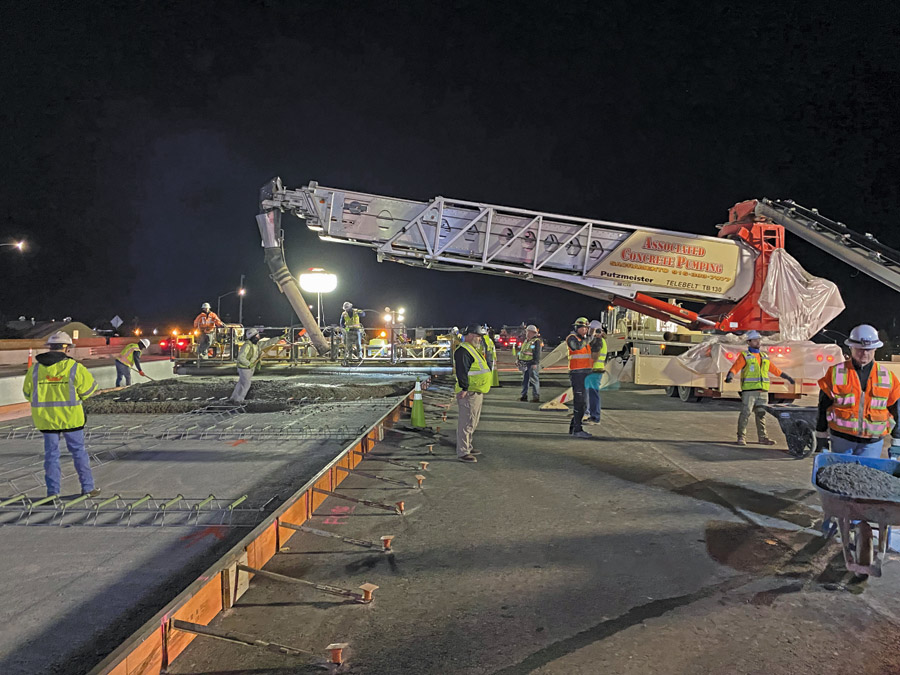 An overnight concrete placement on I-580, where the southbound lanes were rebuilt first to address long-standing west-to-south traffic concerns.
Photos courtesy of Ames Q&D Constructors

Spaghetti Bowl Xpress includes adding an eastbound exit lane from I-80 to southbound I-580, which over the course of less than 1.5 miles also will be getting additional lanes and shoulders, the widening of seven bridges and renovations to a pair of I-580 exits just south of the Spaghetti Bowl.

“The project is not a long project, but it’s a lot of work,” Vrooman says of the job, which is more than three-quarters complete. 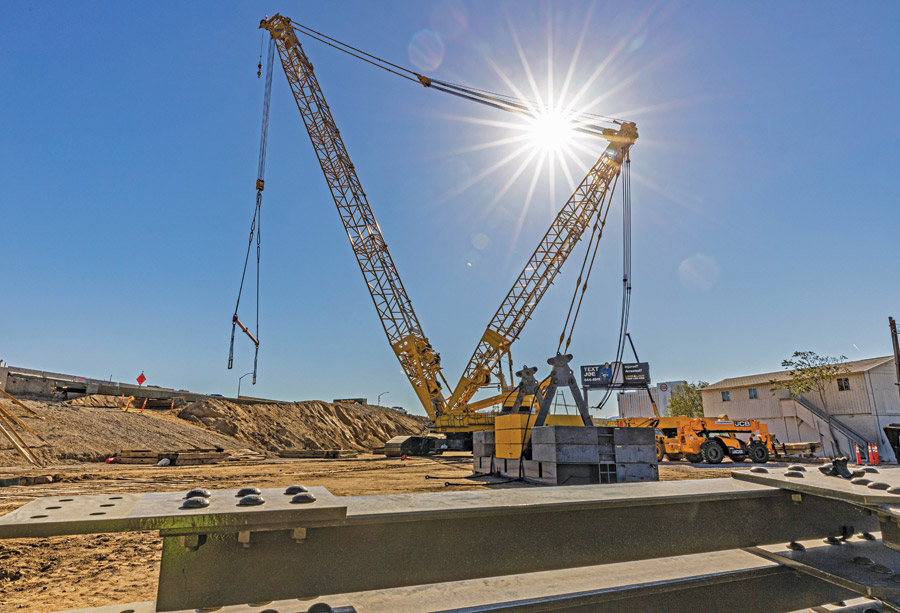 Girders are placed on a bridge over the Truckee River and Kietzke Lane in Reno, part of the Spaghetti Bowl Xpress project.
Photos courtesy of Ames Q&D Constructors

The development team needed to maintain foot and vehicular traffic for “a large casino, numerous businesses along the corridor and pedestrians walking to a Walmart store,” he says.

The team’s tactics ranged from having continual communication with stakeholders to designating specific weekends for construction marathons to shuttling pedestrians around busy worksites.

“We worked with the department on strategies to maximize space for the contractor and maintain traffic flow through the project,” Alexander says. “As we’re building things, we’re always happy to come up with ways to keep people safe at all times.”

Alexander says the project has pushed ahead through the pandemic, supply challenges and a tight labor market. He credits the firms’ dedication of resources to the project and the flexibility that a design-build contract provides.

“So far, nothing has slowed this team down,” he says.

NDOT’s Piceno-Ramirez says the Spaghetti Bowl Xpress, which removes a major safety hazard and improves traffic flow, provides the first of many benefits motorists will see in the years ahead from the overall project.

“It does somewhat temporarily improve the capacity, but ultimately we are not done yet,” she says. “It’s kind of like a teaser of what’s to come when we finish the project.” 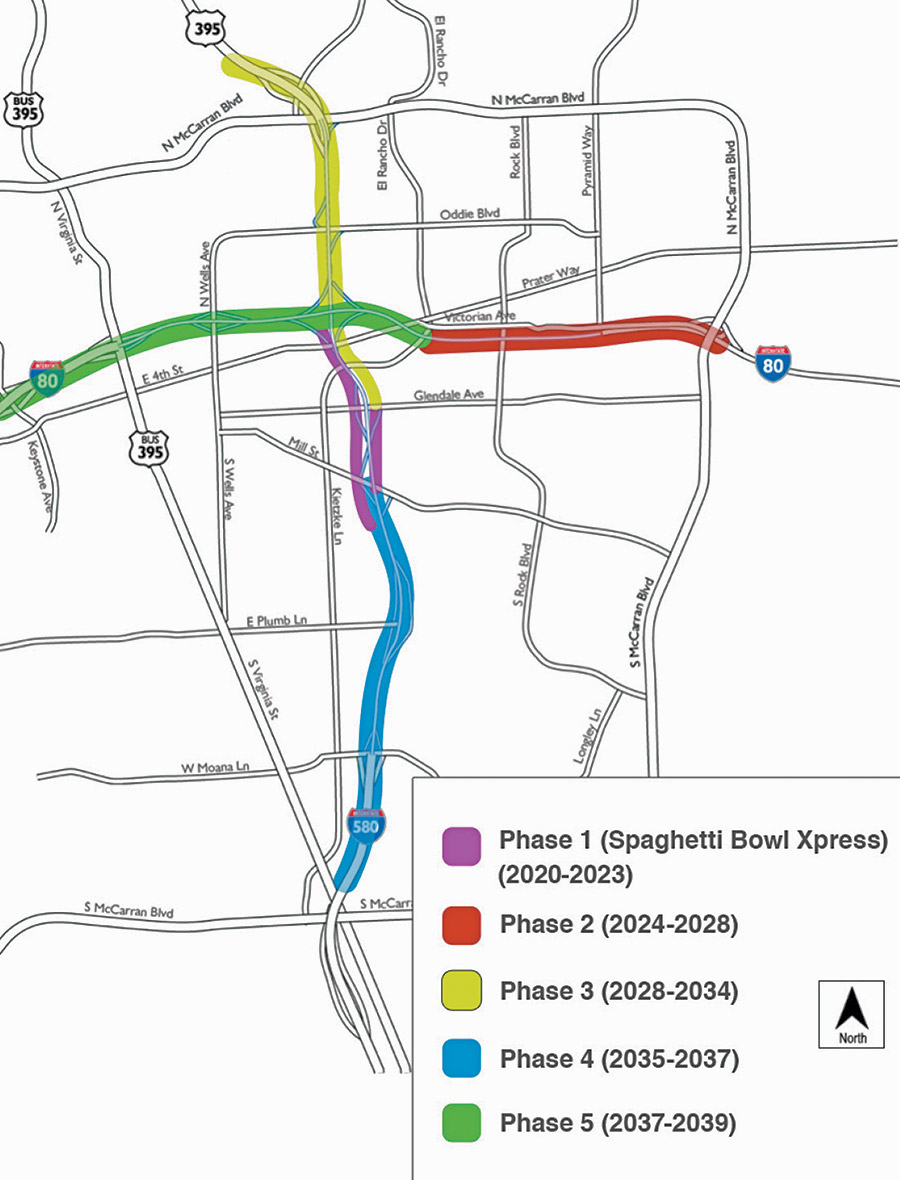 After completion of the Spaghetti Bowl Xpress phase, full reconstruction of Reno’s Spaghetti Bowl will next turn east, then north, south and finally west in a project expected to last until 2039 and potentially cost up to $4 billion.
Map courtesy of the Nevada Dept. of Transportation

In 2016, the Nevada Dept. of Transportation held a series of public meetings and charrettes about downtown Reno’s “Spaghetti Bowl” interchange and future highway needs in the urban core.

“Mobility and traffic flow, along with safety, were overwhelmingly the top priorities” for participants, NDOT reported at the time, with stakeholders saying they would be willing to trade inconvenience during construction if a modern interchange were the eventual result.

Now NDOT is two years into what is envisioned as a nearly 20-year effort to improve the highways through and leading up to the biggest interchange between Sacramento, Calif., and Salt Lake City.

Along with easing traffic flow, the project also aims to increase the level of safety in traveling through central Reno. The freeways within the Spaghetti Bowl project see 25% more crashes than similar roadways in the state, according to NDOT. The rate of fatal crashes in and around the Spaghetti Bowl is also 22% higher than the state average for highways, with a dozen people killed in crashes in the last five years.

Through five phases of construction, the Spaghetti Bowl and 12 miles of metro Interstate will be renovated to enhance traffic safety and remove a major regional chokepoint.

The first phase of the project, dubbed Spaghetti Bowl Xpress, is expected to conclude this year with reconstruction of the eastbound-to-southbound portion of the interchange, the renovation of two exits and the rebuilding of 1.5 miles of I-580 south of the interchange.

Phase 2, planned to begin in 2024, will renovate 2.5 miles of I-80 just east of the Spaghetti Bowl to neighboring Sparks. The interstate will be widened to between three and five lanes in each direction, including three through travel lanes and auxiliary lanes between interchanges. Also, construction of a new I-580 freeway exit and frontage roads will allow removal of two outdated existing exits.

Subsequent phases will reach north, south and farther west of the Spaghetti Bowl, with construction expected to continue until 2039.

The exact scope and budgets for Phases 2 through 5 will be determined by available funding, according to an NDOT spokeswoman, with the overall project ballparked to cost between $2 billion and $4 billion. The schedule for future project phases could also change based on available funding and engineering factors.