This website requires certain cookies to work and uses other cookies to help you have the best experience. By visiting this website, certain cookies have already been set, which you may delete and block. By closing this message or continuing to use our site, you agree to the use of cookies. Visit our updated privacy and cookie policy to learn more.
Home » Pipeline Will Bring Water To Reno Industrial Park
SouthwestSouthwest Construction Projects
Digging Deeper | Water/Wastewater

A 16-mile water pipeline under construction near Reno, Nev., will help keep pollutants out of the Truckee River and bring water to the one of the world’s largest industrial parks, the Tahoe-Reno Industrial Center.

The industrial park and data center company Switch, a park tenant, are building a $32-million pipeline that will annually deliver 4,000 acre-ft of treated effluent water to the park, a project being managed by Reno-based Farr West Engineering.

Once the water reaches the 15,000-acre park, it will be used for industrial purposes, including to cool servers at the Switch Citadel Campus, where one large data center currently operates. A second is under construction, and a third is in development.

The effort is the first regional public-private partnership in Nevada history to engage the municipalities and agencies across Northern Nevada, something that Gov. Steve Sisolak calls “a model of regional coordination and cooperation.”

What’s known as the Regional Water Improvement Project also allows officials to defer a $25-million expansion of existing treatment facilities that treat nitrate-rich effluent water before it goes into the river. Once the pipeline is in place, treated water will be sent instead to the industrial center, where it will be stored in a 2,000 acre-ft reservoir until needed for evaporative cooling. 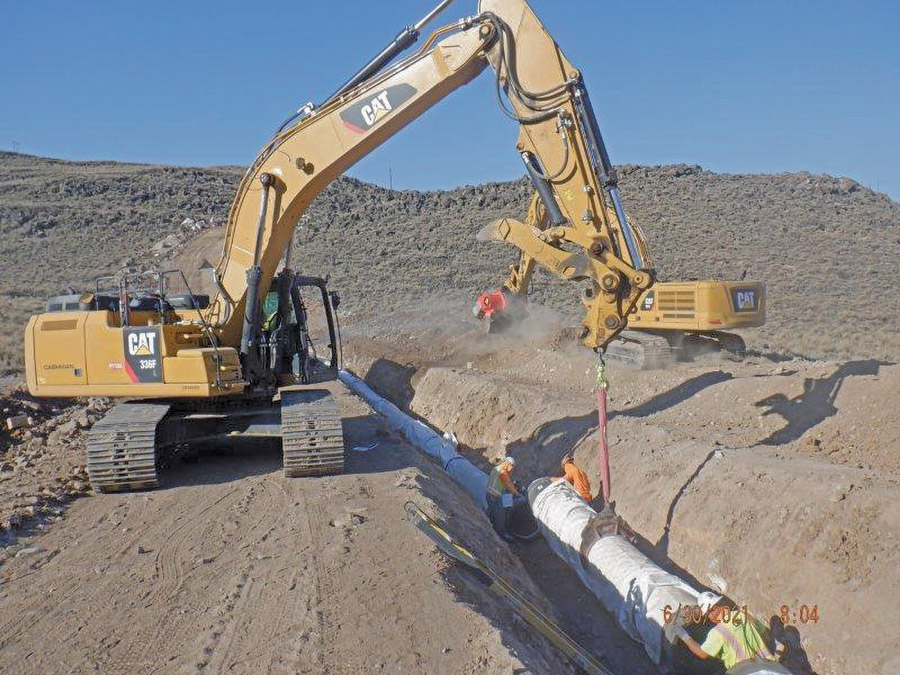 Q&D Construction installs a 24-in.-dia ductile iron pipeline that will move 4,000 acre-ft of water per year 16 miles to the Tahoe-Reno Industrial Center, where it will help cool servers at Switch data centers, among other uses.
Image by Troy Rasmussen, courtesy of Farr West Engineering

“This is a great reuse of the water,” says Farr West’s Chuck Reno, the engineer of record for the project. “It keeps the river cleaner and provides needed water to help power worldwide industry leaders such as Google, Switch and Tesla,” all of which have operations at the park.

Contractor Q&D Construction began work a year ago and as of mid-April has installed more than 12 miles of 24-in.-dia ductile iron pipeline. Reno says he expects the project to be finished by the end of the year and “moving 10,000 gallons a minute” shortly after that.

He says the pipeline has remained on schedule despite encountering more rock than expected in some areas, which required unplanned blasting.
“We utilized trench blasting. As the blast goes off, it would be in a zipper-like pattern for hundreds of feet,” Reno says. “You should see some of the rocks that got pulled out; some were the size of a Volkswagen Bug.”

Another challenge is coordinating related projects taking shape at both ends of the pipeline, making “the development of the reuse system the combination of four large-scale infrastructure projects simultaneously,” Reno says.

At the water treatment plant, SNC Construction is building a $4.5-million dedicated pump station, scheduled for completion this spring.

At the industrial park, the $13.3-million reservoir, being built by Patriot Construction, is nearly complete. The $24.2-million Reservoir Pumping Facility, which will supply water to the industrial park via nearly four miles of 30-in.-dia pipe, began construction early this year, with WW Clyde the construction contractor. Reno says he expects the full system to be operational by early 2023.

After Nevada’s unemployment rate reached nearly 30% in April 2020 during the pandemic lockdown, state leaders said it was past time to diversify the hospitality-dependent economy, particularly in the Las Vegas area, home to three-quarters of the state’s population.

With an eye on the success of the Tahoe-Reno Industrial Center in Northern Nevada, a recent multi-jurisdictional federal infrastructure grant application includes a request for funding to develop an industrial park and a new Interstate-15 interchange south of Las Vegas in the tiny desert town of Sloan.
“This would jump-start a process that’s already underway,” says Tina Quigley, CEO of the local development agency, the Las Vegas Global Economic Alliance. “The trend to onshoring has already created an uptick in interest in the I-15 corridor.”

Taking a regional approach to broadening the economy heartened a top city official in North Las Vegas, which has long courted industrial investment.
“Folks are finally jumping on the bandwagon of diversifying the economy,” says Jared Luke, the city’s director of government affairs and economic development. “We need to have alternative, sustainable employment opportunities outside of gaming and hospitality.”

North Las Vegas is home to distribution centers that hug I-15 as well as the largely undeveloped, city-owned Apex Industrial Park at the far north end of the Las Vegas Valley.

A recent study by the Urban Land Institute says Apex could eventually support 20,000 direct jobs and 56,000 indirect jobs, but development there has been spotty over the past two decades. A proposal to build a $1-billion, 3-million-sq-ft electric vehicle factory there fizzled, but Luke says planned parallel infrastructure improvements remain on track, including providing additional water to the park.

The city and the regional water utility are both bringing water to the park, where new tenants can use groundwater until the pipelines come online in the next few years.

“We should have a fully redundant water supply for the entire 8,000 developable acres by the end of the decade,” Luke says.

The water reuse project is frequently described by local officials as wins for the environment, the industrial park, local governments, tribal entities and particularly the Truckee Meadows Water Reclamation Facility in Sparks, Nev.

Stringent water quality regulations for the Truckee River ecosystem require the reclamation plant reach low levels of nutrient pollutants such as nitrogen in its releases. Having water diverted to the industrial park postpones the time when the reclamation plant will have to invest in expensive new technologies to remain below its pollutant cap.

“We have limits,” says plant manager Michael Drinkwater. “We’re not up against them today, but we have a facility plan for the future that helps us manage the quality of the Truckee River.”

“You should see some of the rocks that got pulled out; some were the size of a Volkswagen Bug.”
— Chuck Reno, Engineer of Record, Farr West

He says that unknown factors such as the pace of future growth in the booming Reno-Sparks area prevent him from estimating when those limits could be reached and when a new or expanded plant will be required.

Keeping the treated effluent out of the river also is good news for the cui-ui, an endangered suckerfish found in the river’s final destination 40 miles away at Pyramid Lake.

Drinkwater says as part of the multi-jurisdictional arrangement, the Truckee Meadows Water Authority will make up for water diverted to the pipeline by allowing a similar amount to remain in the river instead of being used by the utility. This water-rights agreement is a benefit to the wildlife since it’s basically exchanging treated water with clean water.

“Truckee River water comes from snowpacks and is pretty damn clean,” Drinkwater says. “The beauty of the agreement is the return-flow management agreement. It is locked in place. That water has to be used to offset that effluent.” 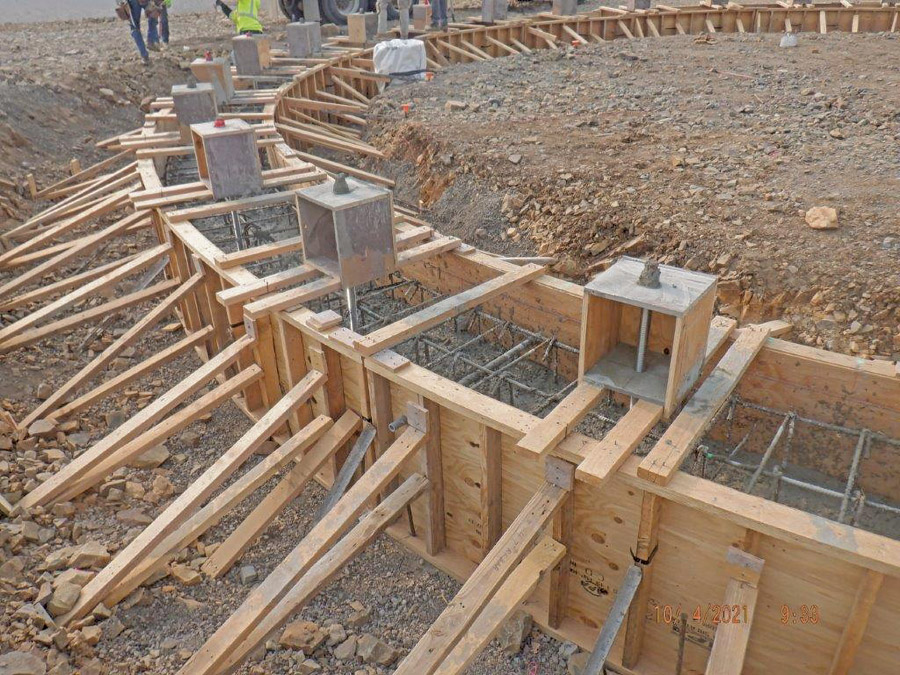 Concrete forms mark the start of construction of a half-million-gallon steel tank at the highest point along the pipeline, about 3.5 miles east of Sparks, Nev.
Image by Troy Rasmussen, courtesy of Farr West Engineering

The water reuse system also allows development to continue at the industrial park, where “several million square feet” are under construction, according to Kris Thompson, project manager for the park that is home to the Tesla Gigafactory.

Thompson says several projects are in development, including “Nanotech Energy’s 500-acre campus, now in construction, where they are building a number of facilities for building graphene-based energy storage and for R&D.” Los Angeles-based Nanotech Energy announced plans last year to develop several buildings at the center associated with its production of non-flammable, graphene-based batteries.

“This is one of many clean-tech companies moving to the region,” says Mike Kazmierski, president and CEO of the Economic Development Authority of Western Nevada, the development agency that helped attract Nanotech Energy. “We are seeing continued expansion in this sector, not just in the industrial park but throughout Northern Nevada.”