This website requires certain cookies to work and uses other cookies to help you have the best experience. By visiting this website, certain cookies have already been set, which you may delete and block. By closing this message or continuing to use our site, you agree to the use of cookies. Visit our updated privacy and cookie policy to learn more.
Home » CMAR Helps Texarkana Regional Airport Project Stay on Target
Texas-LouisianaTexas & Louisiana Construction Projects
Airports

Work continues on a two-story facility that will replace a terminal originally built in the 1960s and will be shared between the twin cities of Texarkana, Ark., and Texarkana, Texas, serving travelers across Arkansas, Louisiana and Texas.

Nabholz Construction Co., Conway, Ark., is serving as construction manager-at-risk on the four-phase project, with WD&D Architects, Fayetteville, Ark., completing the building and interior design. The construction cost is $25.1 million.

The contemporary-style facility will contain two enclosed passenger boarding bridges, elements new to the airport, while curtainwall will provide extensive daylighting. Stone finishes adorn the façade and surround the fireplace in the departure lobby.

In addition to being a strong structural member, glulam reflects the area’s timber industry. The predominant species in the area, Southern pine, is shipped to Canada, where the glulam is fabricated. Shipments of the product have been delayed mainly because of supply chain issues and labor shortages, explains Billy Mayfield, senior project manager for Nabholz, which built the nation’s first large-scale mass timber project of its kind in northwest Arkansas: Adohi Hall at the University of Arkansas, Fayetteville. 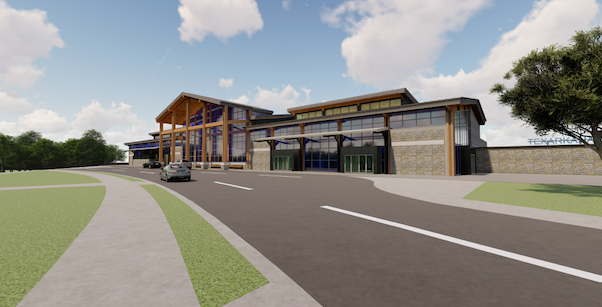 “The aesthetics of the new passenger terminal were designed to coincide with the natural state of its location by having plenty of timber finishes and giving the public a relaxing lodging experience,” Mehrlich explains.

“As you drive through the surrounding areas, you will notice there are many log trucks hauling the Southern pine trees and lumber,” Ruminer adds. “It’s all over in the region, and the design of the terminal reflects the area and timber industry. Even right on the site, there are many Southern pines.”

Steel complements the wood. The glulam is engineered to have the same strength, so structural integrity is unaffected.

“Using steel columns allows the building to present a much thinner vertical element, and using nonstructural glulam to clad the steel gives a taller forest feeling to the main spaces. This pairing allows us to use materials in their best applications and gives us an aesthetic that feels comfortable in Texarkana,” Ruminer explains, noting that one challenge is that the wood must be protected during installation until it’s in the dry.

Each phase of the project requires a separate bidding process. The $3.6 million phase 1 comprised dirt work and foundations, while the $6.8 million phase 2 encompasses the building, including structural steel and the envelope, and glulam installation, which begins in June. Phase 3, which is just bidding, includes interior finishes, buildouts and construction on the parking lot and aircraft apron, while the final phase encompasses exterior site work, including paving, sidewalks, jet aprons, site lighting, jet bridges and signage.

“Due to the nature of the funding, the complexity of an airport, and the many end users that need to be coordinated—TSA, airport administration, transportation rentals, multiple airlines and, of course, the public—a project like this usually requires a long period of time to secure everything before it can be physically built,” Ruminer says. “The time frame we ended up having to predict was between 2016 and 2024, when nothing in the world went as planned. So the design team is put in a position where we have to anticipate and predict the future, which is tough enough to do.”

Before Phase 2 began, Nabholz proposed a more natural-looking structural wood deck instead of the ceiling system and roof design that just looked like wood. “That meant that we needed to redesign the whole roof system,” says Mayfield. “We did away with the TJI joist and added another glulam member to lessen the span for the tongue-and-groove wood decking. This saved the project money and gave the owner the true wood look they were wanting.”

He adds that this exemplifies an advantage of the CMAR model in that Nabholz was able to suggest alternative materials that could save the project money while also maintaining the design intent. In this case, the roof structure will double for the ceiling when it is installed.

“It actually sped up the schedule while reducing the cost of the project,” he says.

As the new terminal enters its final two phases, inflation continues to increase costs. “Federal regulations caused the project to be split into four different phases/grants. By the time we move into the next phase, material prices have increased since the last phase,” Mehrlich says.

This has made it difficult to procure materials early, Mayfield adds. “The funding of a phase may take a few months after taking of actual bids. Because of this, we have tried to buy material as far in advance as possible and store it until needed,” he says.

While these issues have caused some minor delays in receiving materials, the project as a whole remains on track, explains Mehrlich, who expects the project to be completed on schedule in summer 2024.

“This project is a one-of-a-kind in this region of the country,” Mayfield says. “It’s the only airport being built in the region at this time and is a major economic boost for the Texarkana region by adding more jobs and airlines to their airport.”