After attending classes at an elementary school down the block for an entire school year, students at Cohen College Prep High in New Orleans may finally be able to move into a brand new high school building this fall.

The campus is one of 79 that New Orleans Public Schools has built using part of the $1.6-billion lump-sum payment the school district received from FEMA after Hurricane Katrina.

“Given the level of renovation that was needed, it made more sense monetarily” to rebuild the school entirely rather than just modernize and improve the building that was still standing, Cambria says. 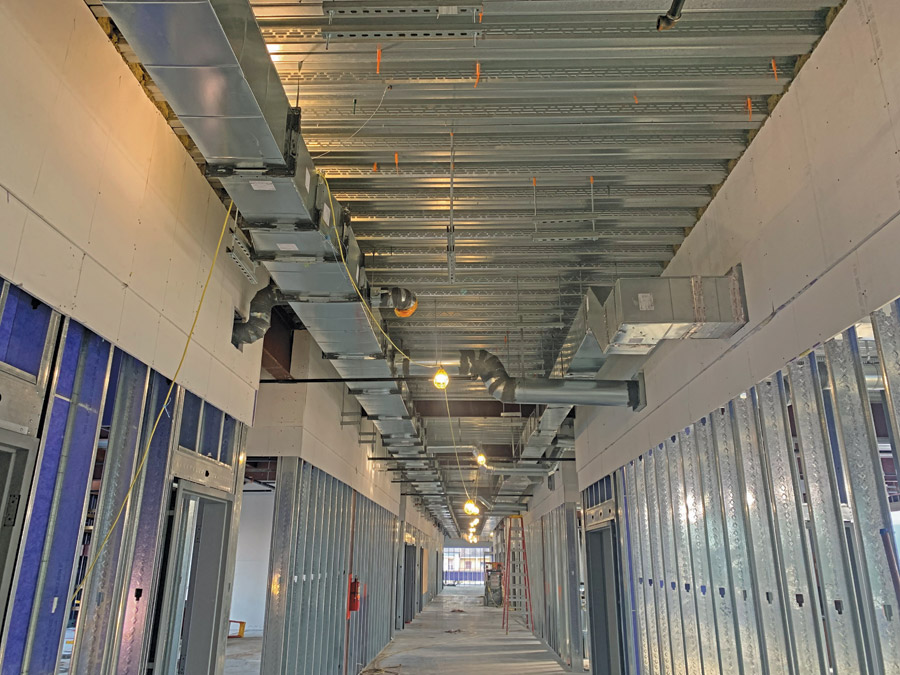 About 12,000 tons of recycled concrete and steel were used for the job.
Photo courtesy of The Lemoine Co.

While Cohen High actually “didn’t really have damage from Katrina,” Cambria says, “there was very strong community support for including this project to update a facility that didn’t meet today’s standards.”

The Recovery School District wanted to make “world-class” improvements to Cohen High that met Leadership in Energy and Environmental Design quality standards, Cambria adds. Some of those improvements include more accommodations for students with disabilities, including three “exceptional student” classrooms, an improved air-conditioning system, windows in all classrooms, which has a measurable influence on student learning, Cambria says, as well as a new 65-space parking lot that will reduce street parking.

Cohen High’s new facility will have a total of 35 classrooms, including two performing art rooms and one visual arts room. Each room will be able to accommodate one teacher and 24 to 32 students.

The old high school was 150,000 sq ft, which officials said was too big of a space for the student population. The new building will be smaller at 104,000 sq ft to better suit the current number of students.

Two features that officials are most excited about are the auditorium space and a state-of-the-art gymnasium. The two-story, 250-seat auditorium will feature a small stage with dead-hung rigging, theatrical lighting and curtains and retractable front rows in case performance groups need more space.

“It’s just going to be a nice place for community gatherings there,” Cambria says.

The new gymnasium will be equipped with a full-size basketball court, two small cross courts that can be used for volleyball and retractable 450-seat bleachers. 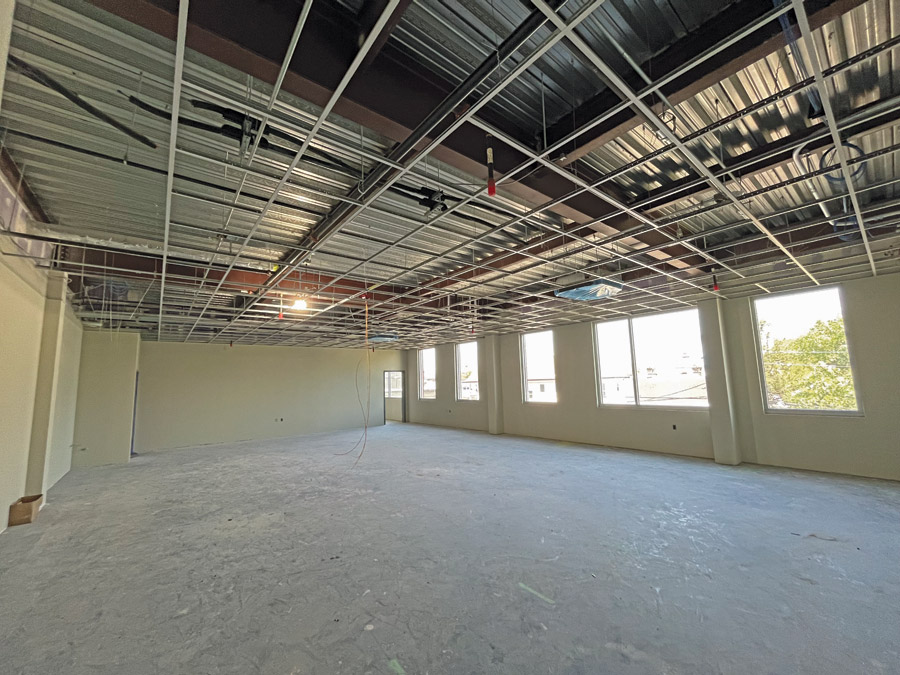 The new facility has 35 classrooms.
Photo courtesy of The Lemoine Co.

Located two blocks from St. Charles Street in between Uptown and Downtown New Orleans, Cohen College Prep is one of the last schools slated for renovations paid for by FEMA funding after Hurricane Katrina struck the Crescent City in 2006.

More than 16 years later, “it’s very exciting to see” one of the last projects that needed renovation to finish up, Cambria says.

FEMA gave the Recovery School District the lump-sum settlement that “allowed the district to rebuild where the students and needs were instead of simply what got damaged,” Cambria says.

“They knew they were going to have some [hazardous materials] in there; they just didn’t know how much.”
—Barry Jones, Project Manager, The Lemoine Co.

So even though damage to the old building from Katrina was minimal, the district was still allowed to use recovery funds to construct a new building.

Of the 79 schools in New Orleans that were slated for renovation with those funds, Cohen College Prep was school No. 78 on the list.

The project’s total cost, including demolition of the old building, will be around $31 million, says Damien Job, architect with project designer Grace Hebert Curtis Architects. About $28 million of those costs will directly fund the construction of the new school.

The old Cohen College Prep was built in the 1960s, when asbestos, lead paint and other hazardous materials were heavily used in buildings, notes Barry Jones, a project manager for The Lemoine Co., general contractor on the project.

“They knew they were going to have some [hazardous materials] in there; they just didn’t know how much,” he says.

Officials did conduct a cleanup process of those hazardous materials while the school was still in use. “It just didn’t get everything,” Jones says. Before demolition, a consulting firm found the existing school contained old fireproofing material and asbestos lined the walls, requiring safe containment and removal. Specially hired subcontractors went in equipped with decontamination suits “to remove the material, properly bag it and dispose of it,” Jones says.

The team then ran air filters outside the building “to make sure the air quality was good,” Jones adds. But before the building was ready for demolition, a follow-up inspection uncovered more asbestos in other areas, requiring abatement.

The asbestos removal also pushed demolition back from December 2020 to February 2021. However, the setback didn’t impact the timeline of the project because reconstruction wasn’t scheduled until March 2021 anyway,  Jones says.

Cohen High is targeting LEED certification thanks to the use of recycled and nearby materials, the installation of bike racks throughout campus and the use of energy efficient light bulbs and air-conditioning units. 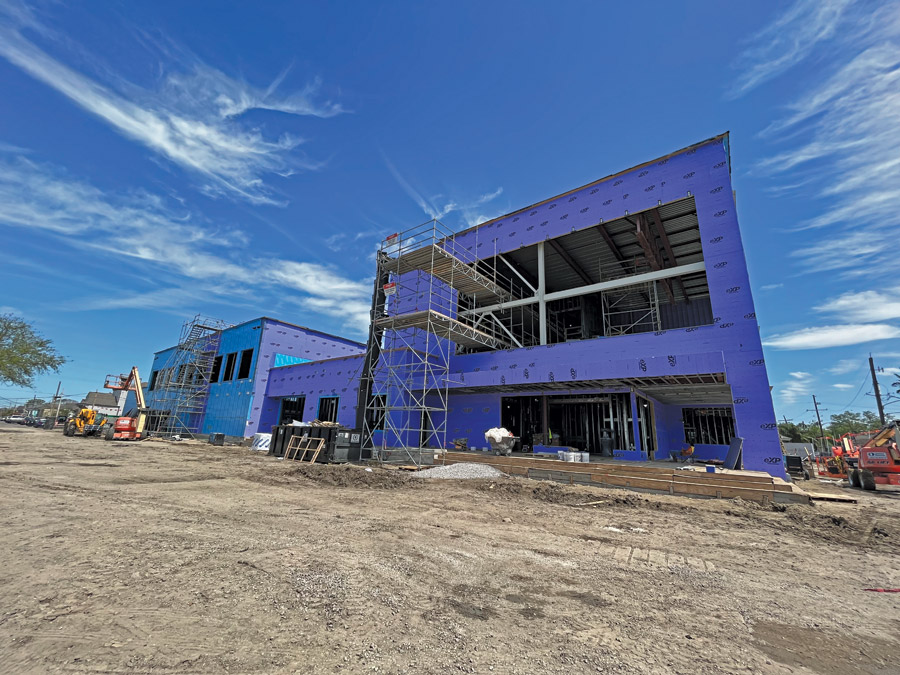 Materials had to be ordered ahead or substituted because of supply chain delays.
Photo courtesy of The Lemoine Co.

“All of the concrete [from the old building] got included in the recycled content” that we used for the project, Jones says, which totaled about 2,800 cu yd.
The concrete and steel from the old building were taken to a recycling plant, where the team collected recycled material to use in the new high school. Of the 14,000 tons of concrete and steel that were removed from the site, 12,000 tons of it was reused in the new school.

Supply chain delays caused by the COVID-19 pandemic also impacted the project, but Jones says the project has been able to stay on schedule by ordering materials ahead of schedule and by making strategic substitutions for materials that wouldn’t have arrived on time.

However, for the owner and design team to approve the substitution, the material had to be of better quality. For example, the light bulbs used for the gym’s scoreboard had to be at least 10% brighter than the bulbs originally slated for use, Jones says.

The project hasn’t been without its challenges—the biggest of which has been the difficulties of building in a residential area of New Orleans, Jones says.
The new high school’s location is in the heart of “an active neighborhood, so not a lot of room around the site,” he notes, and there’s not a lot of room between the school’s property line and the adjacent residential street.

The lack of room has made it especially hard for the construction team to build vertically.

“Sometimes we have to get into the street or go a couple streets down to get bricks up to the scaffolding and stuff like that,” Jones says.

Mitigating construction noise in such a residential area has been another challenge for the team, he says.

For example, concrete placements started around 2:00 a.m.—meaning that the team had to send out letters to the surrounding neighborhood 72 hours in advance. About 150 houses within a two-block range of the site received the advanced notice. 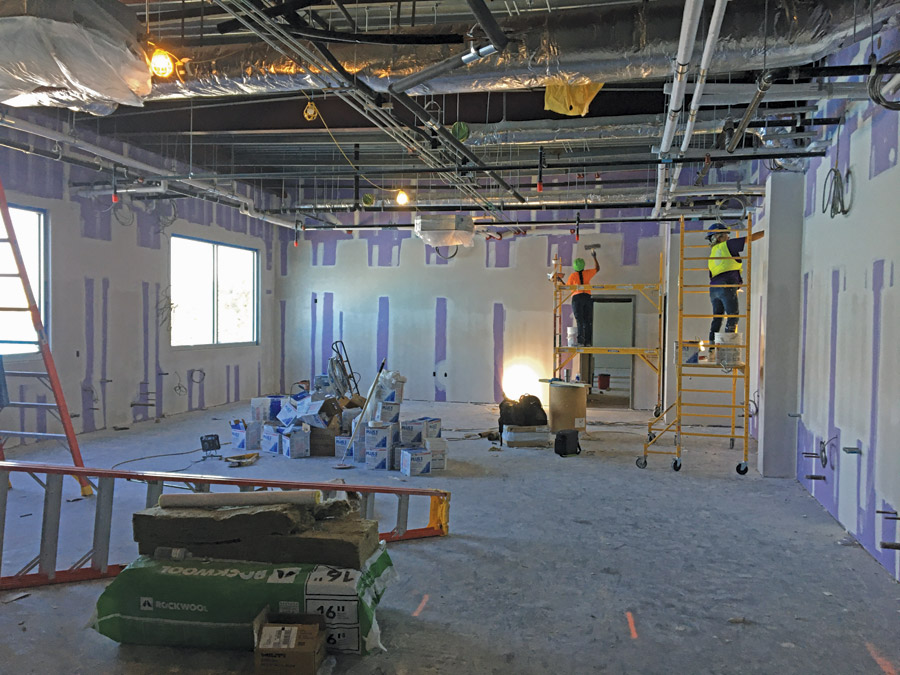 The construction team adds drywall to the interior walls of classrooms.
Photo courtesy of The Lemoine Co.

“I know it’s tough living close to a project going on,” Jones says. “We make noise, we follow the noise ordinance.”

“We just try to be good neighbors; we listen if a neighbor has a complaint about something,” Jones says. “You listen to them, we try to address it the best that we can, make it as little of a hassle as possible.”

Overall, Jones notes more residents than not are happy the school is being rebuilt in their neighborhood and are willing to manage the difficulties of living near a construction zone.

The new high school building is currently on budget and on schedule, officials note, with the completion date trending toward October of this year. Right now, Jones says walls of the building have already been primed, and the team is working on tiling the bathrooms, adding an acoustical ceiling grid on certain floors and adding the remaining drywall on other floors.

But officials still aren’t sure when that means Cohen College Prep students will move into their new classrooms for the school year.

“We are hoping that potentially [students] could move in maybe over Thanksgiving break,” Cambria says. “Hopefully that fall, but definitely [by] next winter.”