Completion of a $1.9-billion light rail extension generally brings with it a pause to celebrate the moment. Not at Sound Transit in Washington’s Puget Sound, where the 2021 opening of the 4.3-mile Northgate Link offered just another key milestone in a long list of ongoing light rail construction totaling $15 billion.

“The number of things we accomplished last year was pretty amazing,” says Kimberly Farley, Sound Transit deputy CEO and chief systems officer. “We were moving forward on all this work in this really challenging environment, both from a safety standpoint [with the ongoing pandemic] and what that meant for progression of the work.”

Along with opening Northgate Link in 2021, Sound Transit christened a new Link Operations and Maintenance Facility on the east side of the Puget Sound light rail map and began receiving 152 new Siemens vehicles. The agency also opened a portfolio of services office in 2021, the equivalent of a program management organization within Sound Transit, something Farley calls an important addition.

“The mission of the office is to be the place where projects originate, where engineering specifications and processes happen, where we create and manage our integrated projects and schedules,” Farley says. “We are trying to do an enormous number of things at the same time.”

The crown jewel of 2021 completions was the 4.3-mile stretch of Northgate Link that runs from the University of Washington north to the Northgate district. The project included two underground stations and one elevated station. 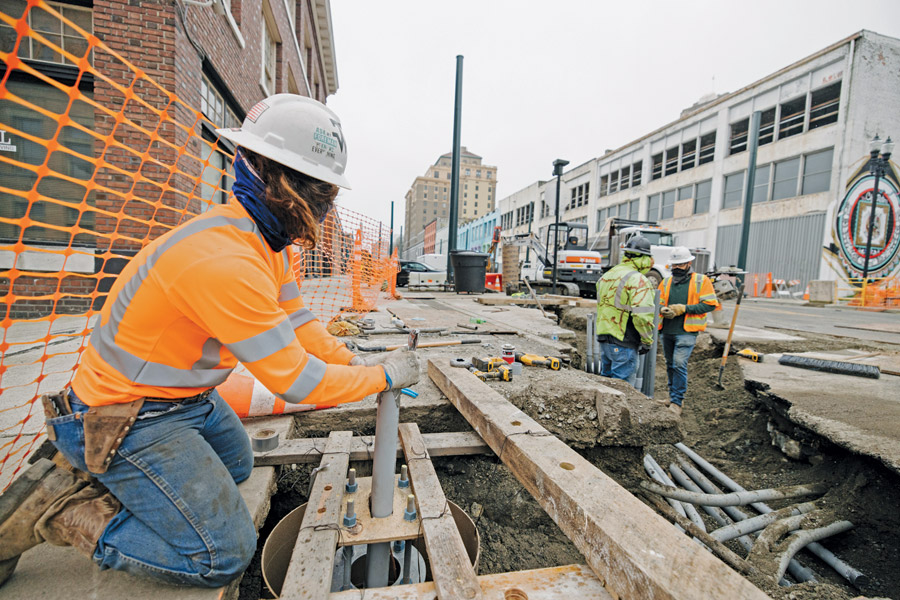 The key parts of Sound Transit’s $138-billion plan to expand light rail offerings across a 116-mile system by 2046 have largely been delivered on time and under budget through 2021.

“It is something we work hard for,” Lewis says. “We are not 100%, but we do make it a priority.” He says Sound Transit works to balance on-time and on-budget project delivery with being a good neighbor in its service communities. Getting both of those done starts with discipline in clearly baselining projects for all parties in relation to scope, schedule and budget. Lewis says Farley was key to helping Sound Transit create a written charter so when things get tough, all parties can go back and read the commitment Sound Transit has made to the project.

“When you lack trust, things slow down because people take time before making a decision because they don’t trust you,” Lewis says. “We need to build that level of trust for when challenges come.”

Mike Aparicio, Skanska executive sponsor, says the Lynnwood Link Extension is the firm’s first project with Sound Transit, and the agency has served as an active partner in the contract.

Aparicio says that “ample, candid feedback” during preconstruction provided the basis for a successful partnership during construction, where the high level of involvement continues. “The negotiations were very thorough, very rigorous, very candid,” he says. “There were times we had disagreements, but the partnership worked on how to align ourselves during the pricing period and has now provided a project that has been fairly priced for both of us and has an accurate estimate.” 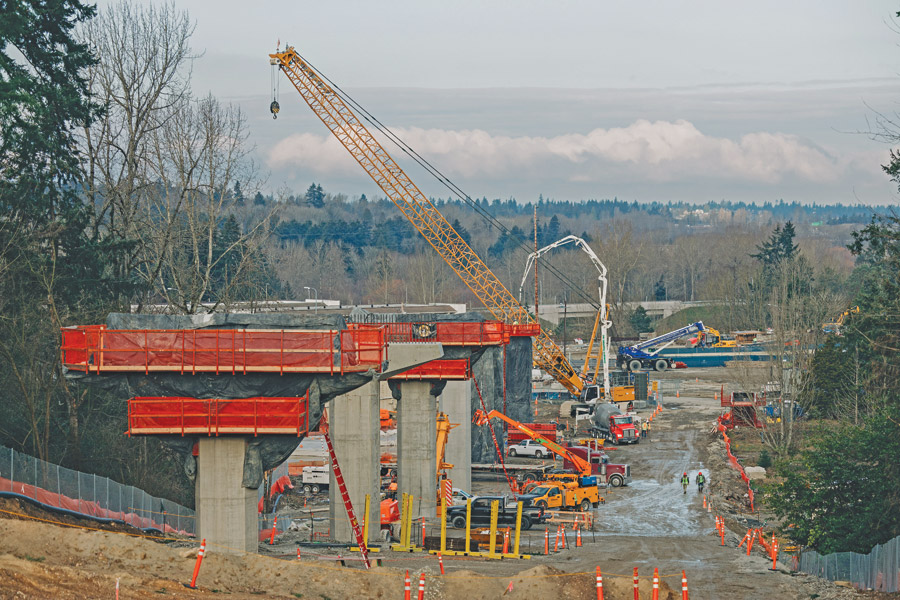 However, getting to a project’s finish line isn’t without challenges, especially now.

Lewis says current challenges arise from lingering impacts of the pandemic and include inflationary prices on materials, keeping minority and small businesses involved, managing supply chain elements that impact everything from raw materials to electrical equipment and maintaining continuity of a professional workforce despite keen competition.

In early 2022, like most projects in the area, Sound Transit’s work was delayed by a concrete strike that extended beyond 100 days, causing more than 40,000 cu yd of missed concrete deliveries to its projects.

Farley says the new project office has helped to manage resources and timelines on all of the agency’s megaprojects. Sound Transit is using general engineering consultant (GEC) contracts to augment staff and urging the new portfolio services office to institute lessons learned in real time while creating standardization across projects.

“We can turn around and say, ‘here’s a heads-up; look for these things,’” Lewis says. One example of that is the need for better geotechnical exploration in the planning phase, even before design begins. 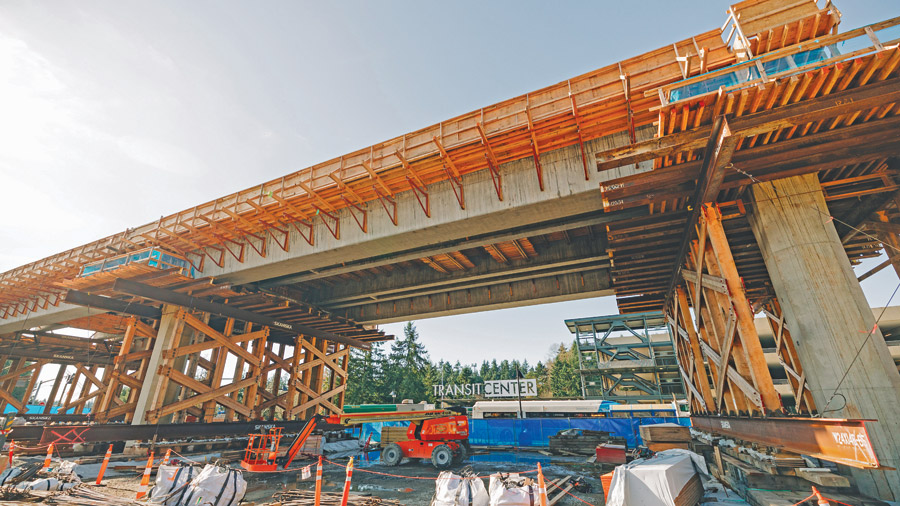 Work on the Sound Transit Mountlake Station, part of the Lynnwood Link extension, adds to the project’s northward expansion, following the opening of the Northgate Link.
Image courtesy of Sound Transit

Sound Transit has worked hard to collaborate with other industry agencies, contractors and designers. “We have been recommitting to those relationships to use the strengths of us as an owner and the strengths of the design and construction industries,” Lewis says.

Farley says she wants Sound Transit to become an “owner of choice,” to have contractors and consultants lining up to work with it.

“We have a good relationship with Sound Transit and vice versa,” Peterson says. “They really try to listen to better ways to deliver and manage projects. That is a great step in that they want to be the owner of choice to work for.” 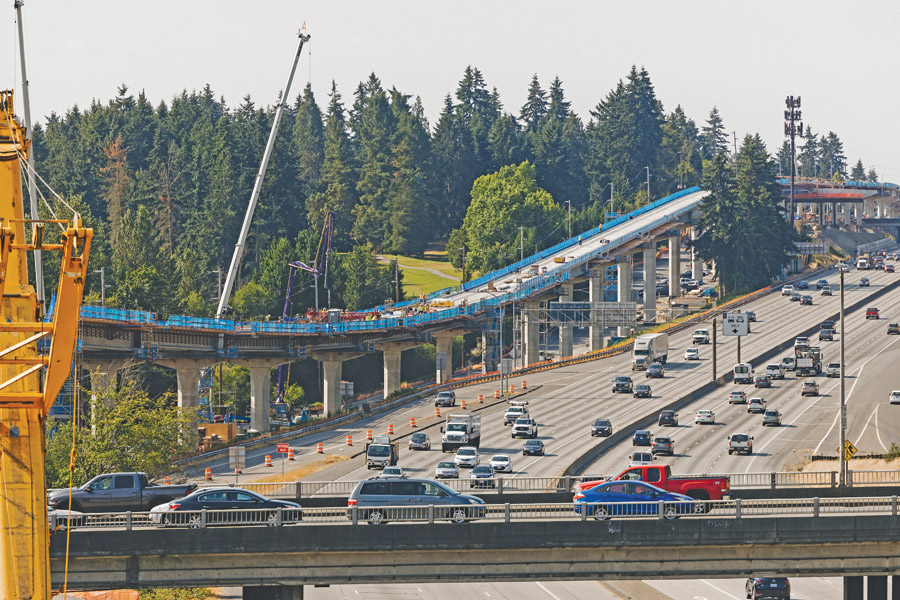 Construction of elevated track is part of the agency’s Lynnwood Link Extension, scheduled to open in 2024.
Image courtesy of Sound Transit

Jonnie Thomas, CEO of Triunity, a systems design subconsultant, says his company works with many transit agencies throughout the country and finds “Sound Transit is one of the leaders in the industry in many ways.”

Triunity has grown since being founded by brothers and minority owners Jonnie and Marvin Thomas in 2003. Jonnie Thomas credits Sound Transit as being one of the firm’s first clients and a key to its growth.

“Early on, it was obvious that they matched our belief system that making justice, equity and inclusion a priority when developing infrastructure projects led to a better outcome for the community,” he says.

Jonnie Thomas credits Sound Transit for championing proactive engagement with the design community via quarterly forums, the availability of key agency personnel for small firms and the opportunity of small firms to win key contracts while not getting siloed. 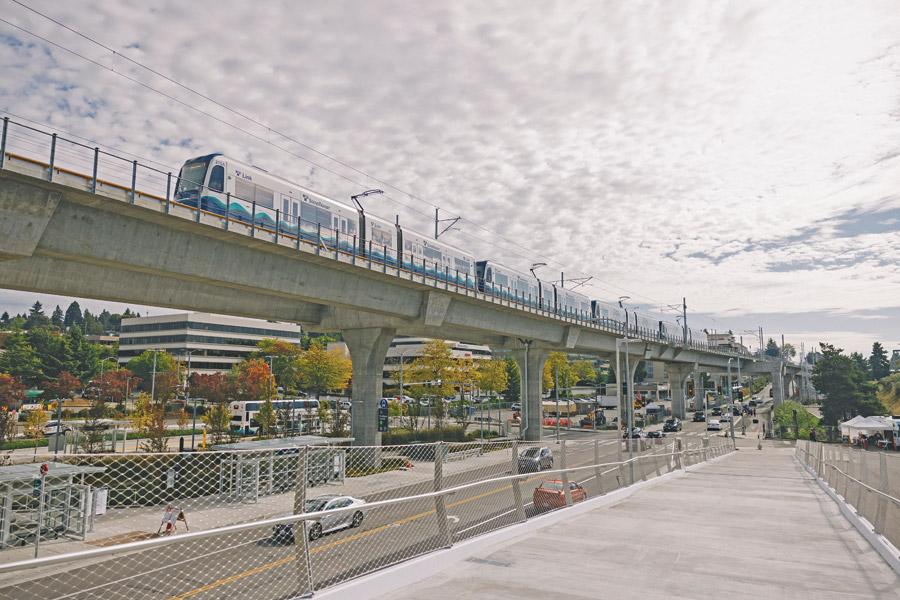 Sound Transit is now engaged in a leadership change and new budget challenges, with costs increasing for projects in planning. Sound Transit’s board of directors in September 2021 did not renew the contract of Peter Rogoff, the agency’s CEO of six years, amid questions about his leadership style and transparency. Farley says Rogoff did a great job in setting up what the organization should look like and implementing organizational challenges. Starting May 31, 17-year Sound Transit veteran Brooke Belman becomes interim CEO.

“She knows the history, she understands the board, she has got relationships with just about everybody and she is a solid leader” Farley says. “They really couldn’t have picked a better person for that role. Peter’s vision and trajectory for the agency is solid; we just need to execute on the plan.”

“The amount of work being accomplished at the same time—I don’t think is happening anywhere else in the country.”
— Kimberly Farley, Deputy CEO and Chief Systems Officer, Sound Transit

All projects currently under construction are fully funded—64% by taxes, 16% from bond proceeds, 9% from grants, 7% from fares, 3% from TIFIA loan proceeds and 1% from interest earnings—so no funding issues remain with the agency’s $15 billion in active work. But projects in planning went through a realignment last year. The original voter-approved package has a revised schedule to ensure affordability.

“We have been asked to try to get additional dollars and find cost savings to pull those timelines back up into the place where they were before realignment,” Farley says. The proposed federal transportation budget for 2023 could alleviate some funding concerns.

Meanwhile, Sound Transit moves forward with $2 billion in capital programming in 2022, including the final year of the Hilltop project, a new garage in Puyallup, continued work on all ongoing projects, including the completion of civil work for East Link, future planning and the commissioning of the first 62 cars in the 152-car Siemens delivery.

“We are extremely proud of the work we are doing,” Farley says. “The amount of work being accomplished at the same time—I don’t think is happening anywhere else in the country.”