In 2008, Maryland’s largest water utility, WSSC Water—formerly known as the Washington Suburban Sanitary Commission—began exploring ways to improve the quality of its biosolids from five of its wastewater treatment facilities. Local landfills were increasingly charging more or sometimes refusing to accept the treated sewage sludge known as Class-B biosolids. The materials have limited applications and cannot be used in public spaces as fertilizer. “Disposal has gotten more and more expensive and more regulated over the years,” says Theon Grojean, WSSC Water’s division manager for facility design and construction.

WSSC Water, with help from AECOM and other consultants, conducted an evaluation of a variety of potential methods to produce Class-A biosolids, which are safe for use as fertilizer or as composting material. After the review, WSSC Water decided to install one of the first thermal hydrolysis process (THP) units in the U.S. at its Piscataway treatment plant in Accokeek, Md. The commission also is adding an energy recovery system that uses biogas produced through the THP process to provide enough pipeline-grade natural gas to power the plant and potentially earn energy credits with Montgomery County, Md.

“It seems like [THP] is the technology that the industry is moving toward.”
—Theon Grojean, Division Manager for Facility Design and Construction, WSSC Water

The $271-million project combines the new THP system and what WSSC Water says is a first-of-its-kind redundant unit, along with the rehabilitation of existing treatment trains at Piscataway and an energy recovery process. It will convert a conventional treatment plant into an advanced facility that will consume less energy and also reduce waste, WSSC Water officials say. Moreover, they say the progressive design-build project delivery method allowed the design and construction team to find ways to economize and improvise when needed before locking in a final price.

PC Construction is leading the project’s construction team; Stantec is the engineer. Demolition at the Piscataway site began in the summer of 2019. The facility  was about 60% complete at ENR MidAtlantic press time and on track to begin operation in the fall of 2024. 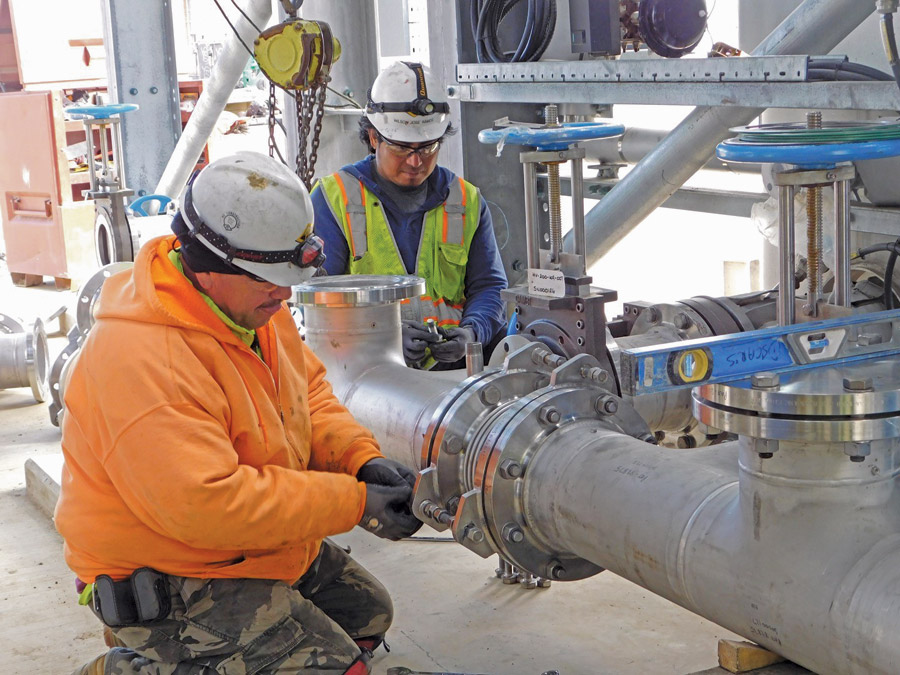 Workers inside the plant’s thermal hydrolysis process (THP) unit, which is one of the first THP systems in the country to be installed at a wastewater plant.
Photos by Pam McFarland for ENR

The THP process, well established in the U.K., is gaining traction in the U.S. as a pretreatment process for anaerobic digestion. “It seems like that is the technology that the industry is moving toward,” WSSC Water’s Grojean says. “We’re not the first to do it [in the U.S.], but we are one of the first.” Grojean notes that the utility had a level of comfort in working with Stantec and PC Construction on the project because of their previous experience with THP. Stantec has been involved in approximately 20 THP projects in the U.K.  Stantec and PC Construction also were part of the team that in 2013 installed the first Cambi THP unit in the U.S., at DC Water’s Blue Plains advanced wastewater treatment plant in Washington, D.C.

In a THP unit, solids from sewage that has been dewatered and compressed into solid cakes is hydrolyzed under extremely high temperatures and pressures. Because the material inside the pressure-cooker-type unit breaks down to the cellular level, the amount of waste leaving the unit is reduced by 50%, team members say. The process also releases more methane, which can be captured and recovered to power the treatment plant.

At the new Energy Recovery Facility in Accokeek, solids from four other WSSC Water treatment plants are brought together with solids from the Piscataway plant and move through the THP reactors. Although several vendors have THP systems on the market, Norwegian company Cambi’s THP’s systems are by far the most widely used, Grojean says. Piscataway’s Cambi THP unit has a capacity of 92 dry tons per day (dtpd), with initial throughput anticipated at around 54 dtpd.

A noteworthy feature at Piscataway is its redundant Cambi unit, which WSSC Water officials say is the first of its type. They add that it is common for facility owners to take a Cambi system out of service for a week or two for inspection and cleaning. They often purchase a second Cambi unit so that solids processing can continue when the main unit goes offline.

The Cambi redundancy unit is a new model that adds two tanks to the base unit, which has four reactors and two tanks. That enables operators to remove one reactor at a time for yearly inspection and maintenance without shutting down the entire Cambi system. According to Stan Dabek, WSSC Water project manager, the advantage for the utility is that it can provide “continuous operation of the THP system at a much lower cost.”

The project’s components will work in concert with the goal of reducing bisolids and saving energy when the plant is online in the fall of 2024.
Image courtesy of WSSC Water
*Click on the image for greater detail

Robert Wierzbicki, PC Construction project director, says the plant “is kind of a self-contained loop” in which water and energy are captured and recycled.
The sludge moves from the THP unit to one of two 50-ft-high, 78-ft-dia anaerobic digesters, each with a capacity of 1.5 million gallons. The excess biogas, rather than being burned off, is cleaned up using conventional scrubber technology. The purified gas can then be recycled back into the plant to power its engines or sold to the county as renewable natural gas.

A by-product of the THP process is higher levels of ammonia than typically seen with other treatment methods. The elevated ammonia concentrations could upset the balance of nutrients allowed under the Chesapeake Bay total maximum daily load requirements, Wierzbicki says.

To reduce ammonia in the filtrate, the team added a biological sidestream process for denitrification using bacteria grown on plastic carriers. The filtrate then goes back into the Piscataway main wastewater treatment system for further processing. 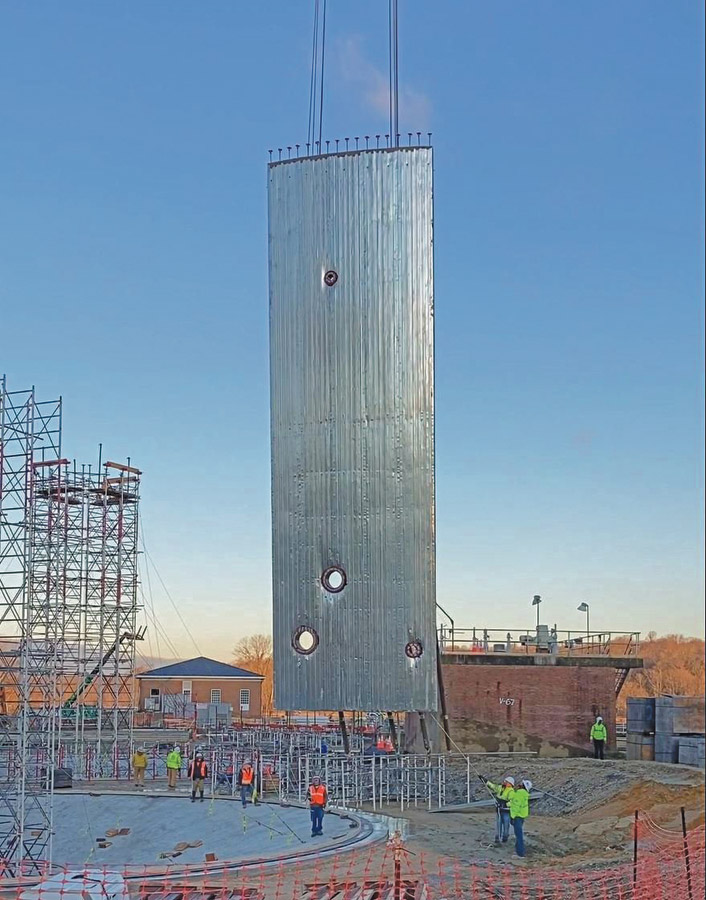 The project team places a panel for one of two 50-ft-tall, 78-ft-dia anaerobic digesters, each with a capacity of 1.5 million gallons.
Image courtesy of PC Construction

Exhaust from the engines within the treatment facility is run through a boiler, which creates the steam and hot water needed to run the Cambi THP unit. The team also decided to have the five power distribution centers for the project prefabricated and assembled off site while the foundations were poured on site. That shaved months off the construction timeline, according to WSSC Water.

A crane with a 2-ton capacity for removing and replacing pumps and rollers for dewatering was installed after the building was erected. The beams to support the crane were skidded across the floor and then hoisted into position from inside the building.

For the digesters, the construction team used 50-ft-tall concrete panels cast on site, using post-tensioning to reinforce the concrete once the panels were erected. Workers filled the sections between the 17 panels in each tank with concrete to allow them to hold together. They then covered the panels with shotcrete. 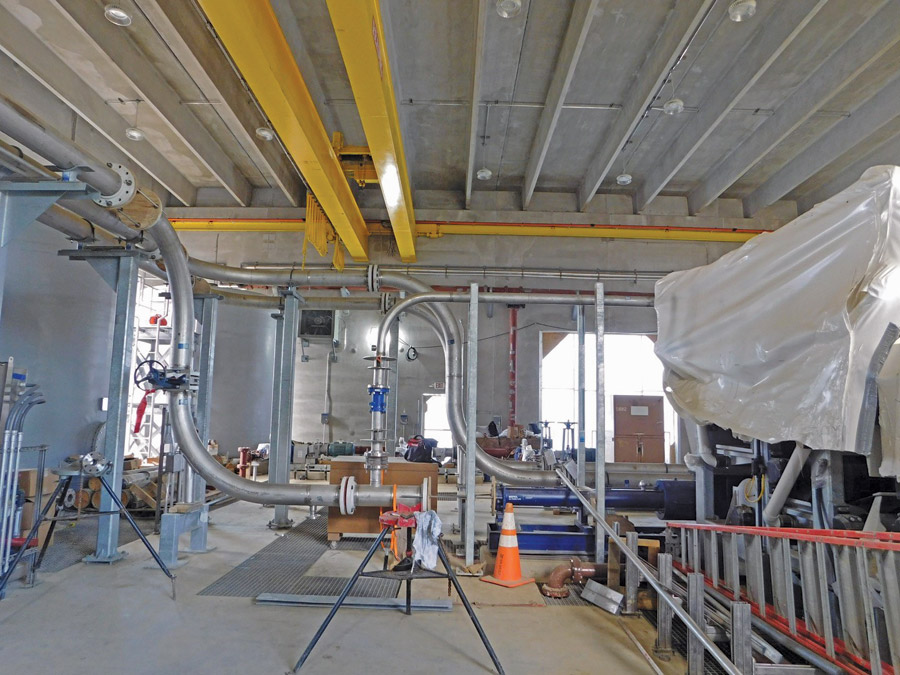 The project team is using a progressive design-build delivery method, which is still somewhat uncommon among water and wastewater facilities in the MidAtlantic region, although design-build in general is becoming more prevalent, Wierzbicki notes.

Design-build enabled the integrated design and construction team to revise plans as needed and to hold off on setting a final price until design was 60% complete. That avoided delays and change orders, Wierzbicki says.

Joe Uglevich, vice president and a regional business lead for Stantec’s water division, adds that having all of the contractors, major subcontractors and engineering firms working as an integrated team “from Day 1, where they are thinking about how they are going to build it, instead of getting too far down the road” with a design only at 10%, allows for more flexibility and lower costs.

Wierzbicki notes that the progressive design-build process permitted the team to get ahead of supply-chain issues related to COVID-19.

But because the team had been working together for months, many elements—such as scope of work, contract terms and pricing—had already been worked out in principle.

As a result, Wierzbicki says the team reached out to vendors, suppliers and subcontractors and got them signed up—with the caveat that the work was contingent on the team’s receiving the final award from WSSC Water. That enabled them to avoid delays because they didn’t have to wait for a formal notice to proceed, which would have set the timeline back, he says. “I think you build a trust throughout the design process and pricing process … [which] allowed us to be as open and transparent” with the owner when challenges did arise, Wierzbicki says.

WSSC Water’s Dabek underscores that the project is challenging the commission’s staff to learn new ways of doing things.

He notes, “The new technologies brought by the bioenergy project will require a lot of training on the new processes and on how to operate the more complex equipment.”

G7 Nations to Invest $600B in Developing Nation Infrastructure