Lifting the 109-year-old, 1,657-seat Palace Theater from its ground floor base to a new perch 31 ft higher into the structure is a strong contender.

Carving out two basement levels under an already existing structure on Broadway, at one of the busiest corners in the world, also ranks pretty high.

But erecting a massive post-tensioned concrete truss box across four floors also has to rate, as does demolishing most of an existing 45-story building to erect a mostly new 46-story tower in its place at the Seventh Ave. and West 47th St. intersection.

But the show-stopper will be executing those tasks simultaneously or sequenced tightly, says Eric McGovern, president and CEO of Pavarini McGovern, construction manager for the developer team of L&L Holding Co., Maefield Development and Fortress Investment Group.

“It was hours and hours and nights and days of just intense coordination between a large design team and the construction team and all the consultants,” he says.

The 580-ft-tall tower, set to finish early next year, isn’t following the urban redevelopment playbook of demolition, foundations and then erection, says Robert Israel, L&L executive vice president. While initial demolition work started in 2018 and the new building topped off last month, use of a zoning exemption that requires keeping 25% of the old structure has led to tasks such as foundation work taking place later in the schedule. 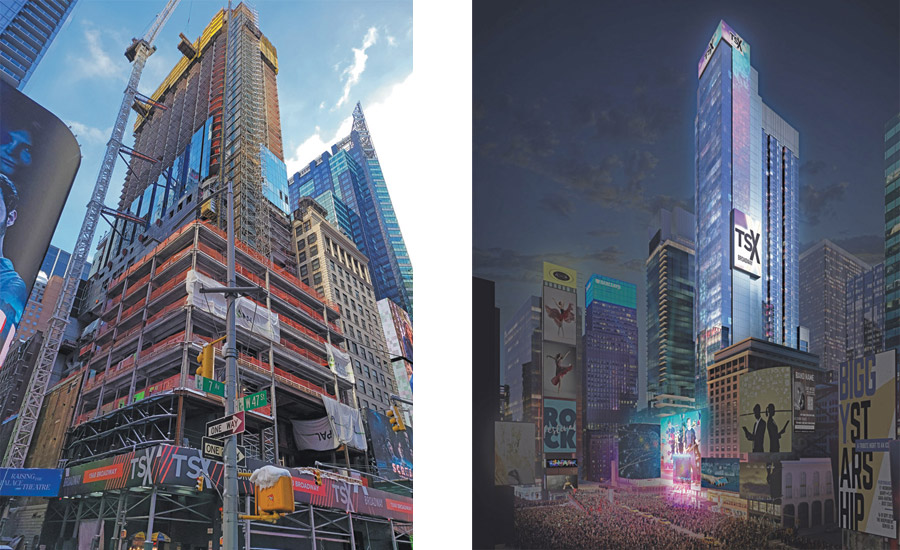 “We still to this day are doing demolition work on this project, and we’re topped off,” he says. “That’s highly irregular.”

“This is a highly complex project,” Jijina says. “Just following the load paths from roof to foundation is a feat.”

A chief example of that complexity is the post-tensioned concrete transfer truss, the second largest of its kind in North America, McGovern says. The structure features three post-tensioned girders—each 120 ft long, 4.5 ft wide and 44 ft deep—that help form a tabletop spanning the theater below and supporting the 669-room hotel tower above.

“Trying to get giant steel members into that site was just not practical,” he says. 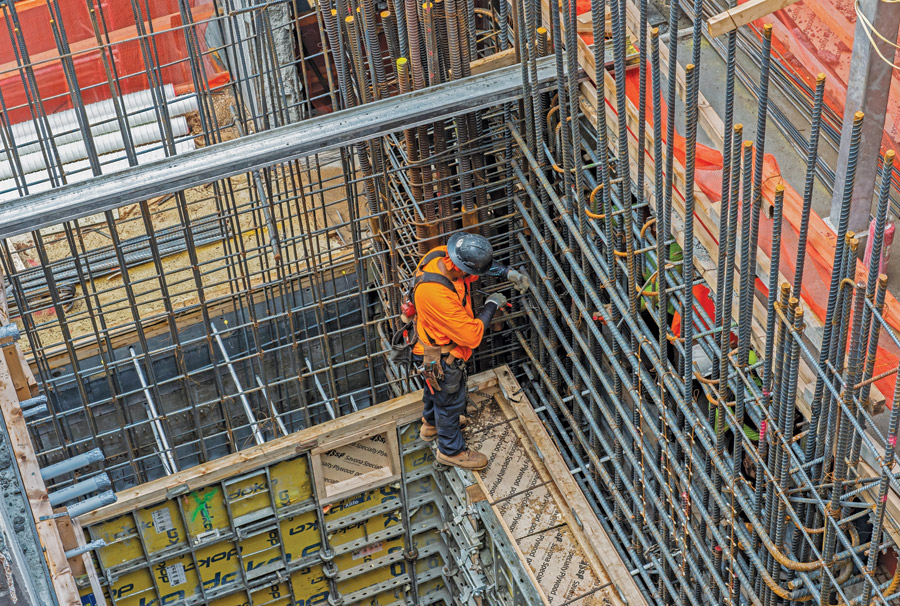 Erecting the concrete truss last spring still was challenging because of the theater below, which prevented use of extensive shoring supported by the ground. The design instead used the steel truss from the old tower as an initial construction platform to support temporary shoring and bracing, Jijina says.

The truss required three different tendon-stressing stages, McGovern says. Re-tensioning occurred each time the team added the weight of 10 new levels to the tower. “You can’t do all your stressing at one time,” he explains.

The team ultimately tied the girders together with 16-in.-thick cast-in-place concrete slabs at the 12th and 16th floors. 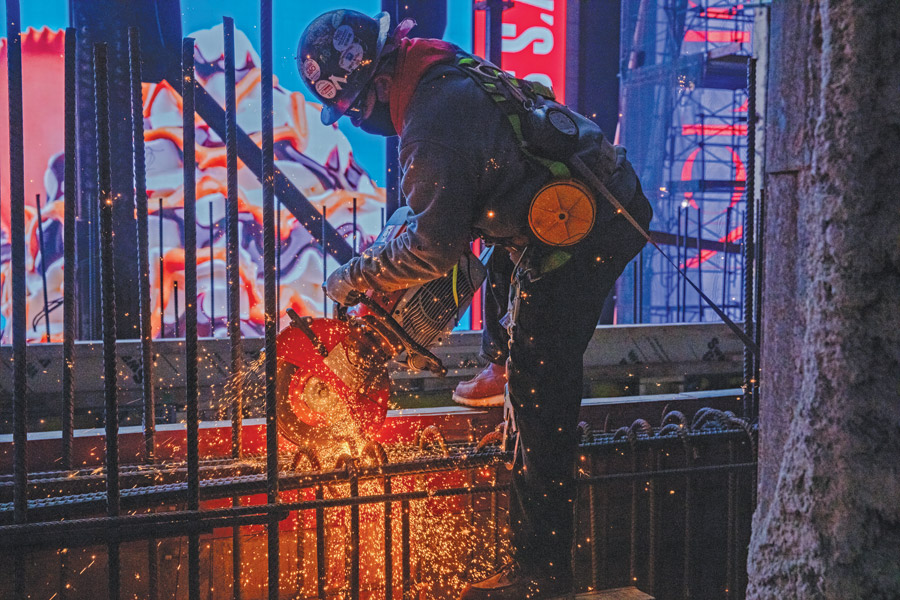 Crews began building the new tower after the old DoubleTree Hotel on the site was demolished and before the theater was ready for liftoff.
Photo courtesy L&L Holding Co.

Out With the Old

Demolishing the 1568 Broadway tower that was built over the Palace Theater three decades ago, and most recently used as a DoubleTree Hotel, was a critical step in transforming the structure into a luxury hotel with high-end retail and dining, an outdoor stage and external advertising space.

To meet requirements to use 25% of the old 45-story structure and keep the site’s overbuilt zoning status, the team opted to save floor slab sections in its lower portion, Israel says. “That allowed us to demolish the tower down to the 16th floor,” he says. “We actually took out the old column structure. All that remains are the slabs—everything else is gone.”

That strategy also opened a space between the third and eighth floors on the eastern half of the footprint, where the theater is going. The new building’s podium also has a western segment that stands alongside the theater.

After the theater lift, the cellar and the first and second floors will have column-free spaces for retail tenants that can fully use 100 ft of Times Square street frontage, Orowitz says. The developers expect to have at least two anchor retail tenants. “We wouldn’t have lifted the theater if we weren’t on the most trafficked corner in the Western Hemisphere,” he says. 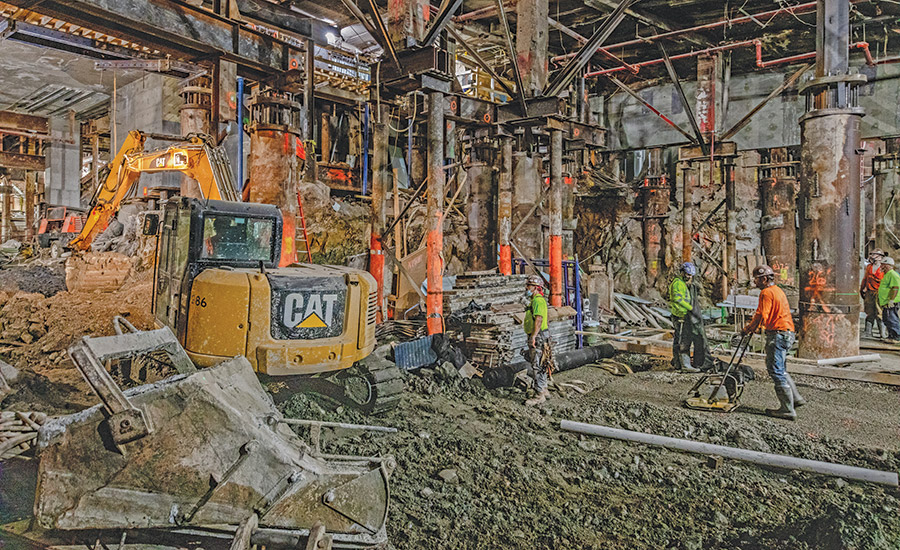 Workers place hydraulics under the Palace Theater in Times Square months before the historic building began its slow lift into TSX Broadway, a tower built over and around the venue.
Photo courtesy L&L Holding Co.

The tower will have 75,000 sq ft of flexible retail space across 10 lower floors, a third floor lobby for the theater and 30,000 sq ft for dining—including a 10,000-sq-ft outdoor terrace.

The building allocates support space in the cellar levels for theater and hotel back of house functions; for the hotel lobby and for dining on the 11th floor; and for electrical vault, mechanical systems and other utilities in the truss from the 12th to 15th floors. The project also is incorporating capacity to reach millions of visitors with its outdoor stage and massive exterior signage, Orowitz says.

“All of those pieces require different experts, different designers, different perspectives on how to commercialize them,” he says. 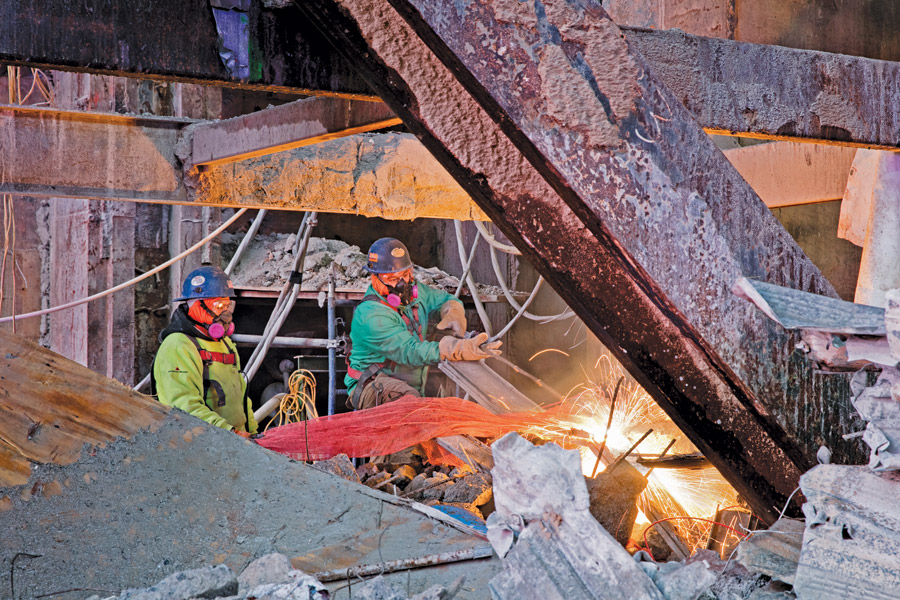 Safely deconstructing the old tower, which began in late 2018, involved complex shoring, bracing and removal techniques on a crowded corner site between adjoining buildings. A key strategy was hardening old elevator shafts to create chutes for removing scrap materials and debris, with crews gutting the tower from the top down.

On the lower portion of the tower, demolition was more selective. The team reinforced slabs it was keeping by thickening them, creating a higher load capacity able to span twice the prior length and allowing for the removal of interior columns, Jijina says.

At the same time, the team was drilling caissons and excavating a new subcellar level out of bedrock, lowering the foundation by 30 ft—all while remaining portions of the old tower stood above, McGovern says.

“While this is all happening, you’ve got to stabilize the 25% of the building, so there’s a whole separate design that has to be concurrent with—and support—the structural design,” he says. Those stabilization efforts included sequential removal of floors, reinforcement of existing columns and replacing other columns with temporary hangers, Jijina says.

The teams also had to account for the theater foundations, McGovern says.

“The theater has its own foundation system concentrated on by a separate team,” he says. “Everything else around the perimeter—the new footings and foundations for the new grid for the tower, which supports the transfer truss—had to go in at all the same time.”

The carefully choreographed theater lift—which began Jan. 7 and continuies at press time—is a project in itself.

But it will all end up 31 ft higher than before. The lift concept required intensive research, starting with bridge conveyance and house moving projects, McGovern says. “We spent many hours together just brainstorming on how to do it,” he says.

Prepping the structure to withstand the lift was a major task, says Domenick DiNizo, L&L vice president. “We spent the majority of the first year of the project doing very detailed surveys of the historic plaster and terra-cotta, and implementing a very robust stabilization plan,” he says.

That plan included reconnecting old wire ties to historic plaster, masonry repairs of terra-cotta and installing the primary structure for a new stage, which during the lift is offering lateral support, DiNizo says.

The biggest hurdle was right at the start, McGovern says. “The toughest part of the lift is breaking the existing theater free from its foundations that it’s been on for 100 years,” he says.

The lift is using a series of structural steel shoring posts and 200-ton hydraulic jacks, each with a maximum stroke of 6 in. before needing to be reset, DiNizo says. The team started moving up only a few inches a day, he says.

“We wanted to go slow early given what we’re lifting—a 100-year-old landmark theater—and to make sure [we] understand how the theater is reacting to the lift,” he says.

Once the team got into a flow resetting the jacks, the lifts moved to around 2 to 3 ft a day, until the theater hit the 17-ft mark in early March. Steel erection crews stepped in next to install structural framing, connecting to new columns from the cellar and pouring a cast-in-place concrete ground floor, DiNizo says.

A second push will bring the theater up to 31 ft, with crews adding more columns and a slab on metal deck second floor, he adds.

“Then the load transfer will go onto the permanent structure and then all the lifting apparatus—the lift posts and the temporary shoring frames—will be removed,” DiNizo says.

During the lift, crews are carefully monitoring the gaps between the theater’s exterior and the new building’s envelope, he says. The gaps—for seismic and sound reduction purposes—are 1 to 3 in. on the east side and 4 to 5 in. where the building connects to the western podium via expansion joints. 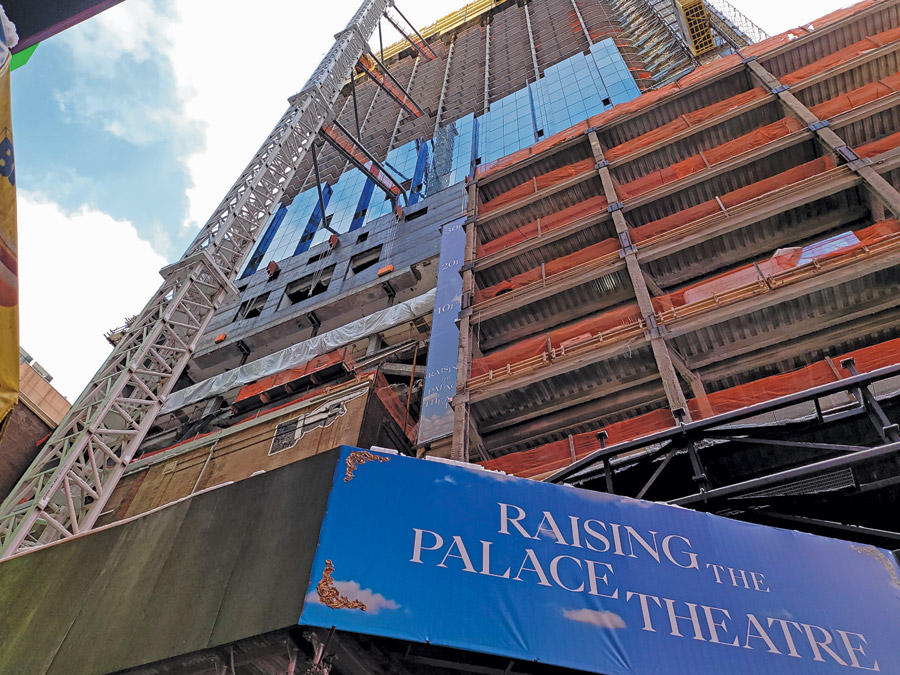 The palace theater is seen at the far right of the above photo, and the image at bottom shows its final resting place.
Images: (above) by Eydie Cubarrubia; (below) courtesy L&L Holding Co. 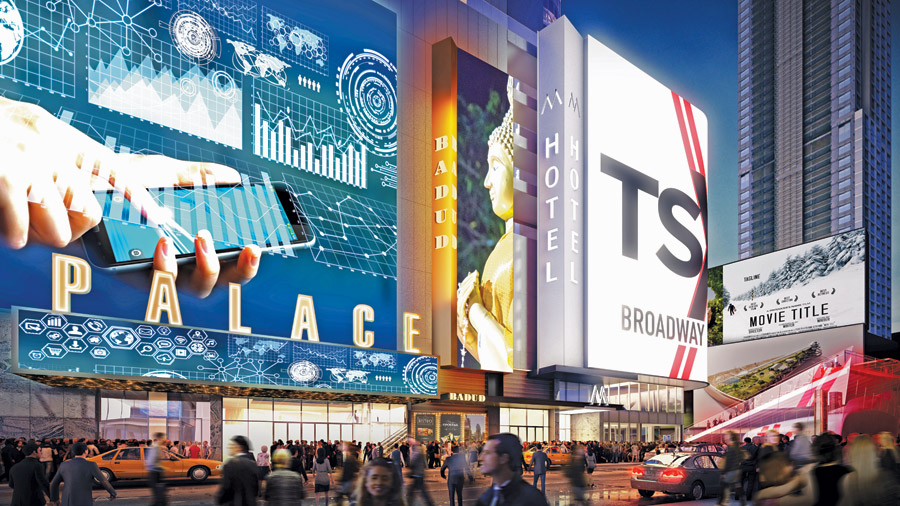 Signs of the Times

A final highlight for the TSX tower will be its dynamic exterior, with Times Square’s only permanent outdoor stage and a battery of integrated signs and lights from base to crown. The external 4,000-sq-ft performance venue is on the third floor, which when closed also functions as a 30-ft by 30-ft sign. That section will also have seating, terraces and a bar and lounge.

“This is a highly complex project. Just following the load paths from roof to foundation is a feat.”
—Cawsie Jijina, Principal, Severud Associates Consulting Engineers

The building’s base will have an 18,000-sq-ft high resolution digital sign with more than 9,000 LED nodes, which will wrap around the stage. A facade lighting system also runs up the tower’s curtain wall system, and its four-story crown will have three 420-sq-ft LED signs.

“That will be over 600 picks of steel and equipment and components on the roof,” McGovern says.

The total 51,000 sq ft of advertising space—along with opportunities to customize lighting, messaging and images—can work in a single integrated package. It also fits right into the unitized curtain wall that gives the building a unique feel, Israel says.

“It’s a facade that even in the middle of Times Square, you’ll be able to see us,” he adds.