The massive project—conceived of decades ago, started and stopped in previous eras, funded just before the 2008 financial crisis and since reprogrammed several times along the way—has had various milestones over the past 10 years, including the completion of tunneling, track laying and excavation of caverns for a 350,000-sq-ft station beneath the existing Grand Central. But the current phase is the real end game—train and engine crews doing pilot runs, installing and testing train systems and final station fit-out work.

The testing phase alone showcases the project’s scope and complexity, says Rob Troup, MTA’s senior program executive for East Side Access, who took on his role in 2018, 11 years after the first tunneling began. 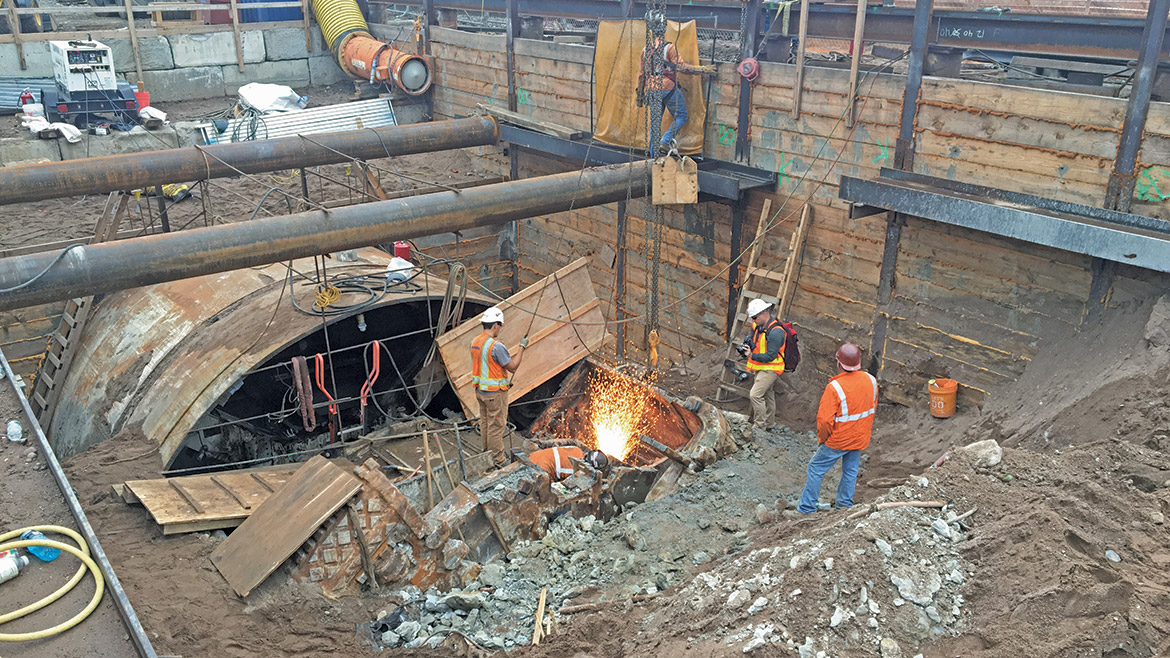 Workers in October 2019 demolish and remove a tunnel boring machine cutterhead at the Queens tunnels that are part of the East Side Access megaproject.
Photo by MTA Construction & Development Mega Projects

“There are 29 major operations and control systems for East Side Access, and most are fully integrated,” he says. “I’ve been here three years and am still amazed at how big the project is, and how complicated the systems are and need to be.”

Ensuring each component works as intended—and that they all work together—is a critical step, Troup says.

“Just the smoke extraction, fire alarm, fire and life safety, and building management systems are big and complicated on a project of this size,” he says. “The challenge is in thoroughly testing the elements and making sure they’re working properly. When you have a project where some features are 10 years old, sometimes you get to an asset that needs to be repaired or replaced.” 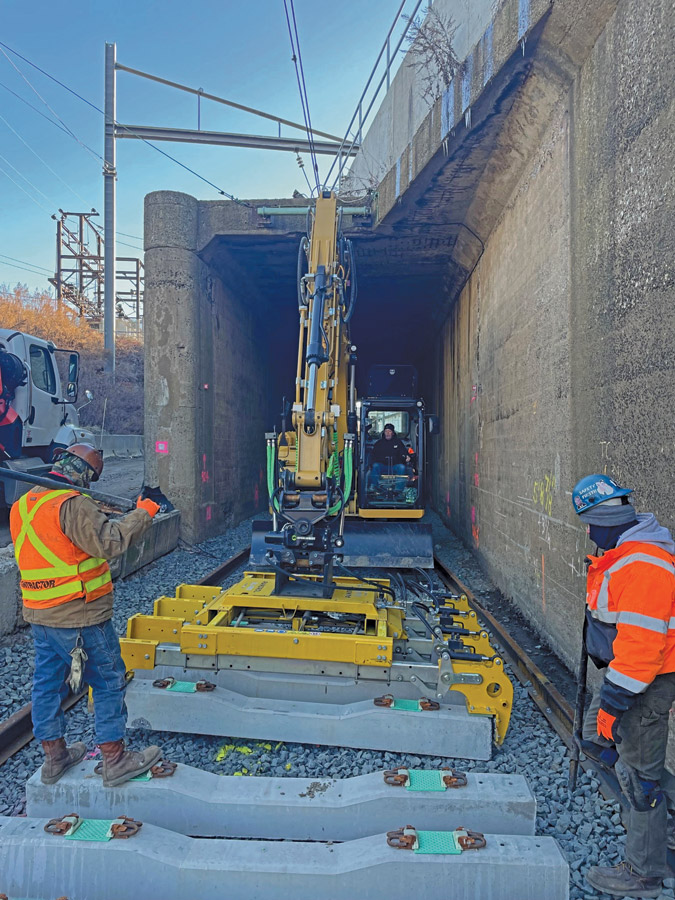 Concrete ties are installed in March 2022 on a line that’s part of the Long Island Rail Road’s 40 miles of new track for the East Side Access project.
Photo by MTA Construction & Development Mega Projects

With major civil work completed last year, the testing phase began in earnest several months ago, particularly around advanced train operations systems that will be part of the mix from the first day of service, says Vanessa Ajdinova, vice president for Northeast operations at Jacobs, which is the East Side Access project's consultant construction manager.

“Over the last number of months, [LIRR] passenger cars were brought onto the project and operated using the permanent traction power and signal system,” she says. “This included testing all related rail infrastructure, including power, signal and track systems. The first goal was to check static and dynamic tunnel envelope clearances, followed by testing of the systems that support the passenger train operations.”

When the tests have the intended results, it’s a huge boost, Ajdinova adds. “Having spent many years building this vast and complex system, seeing trains successfully operate on the East Side Access tracks is a defining moment for the project team,” she says. 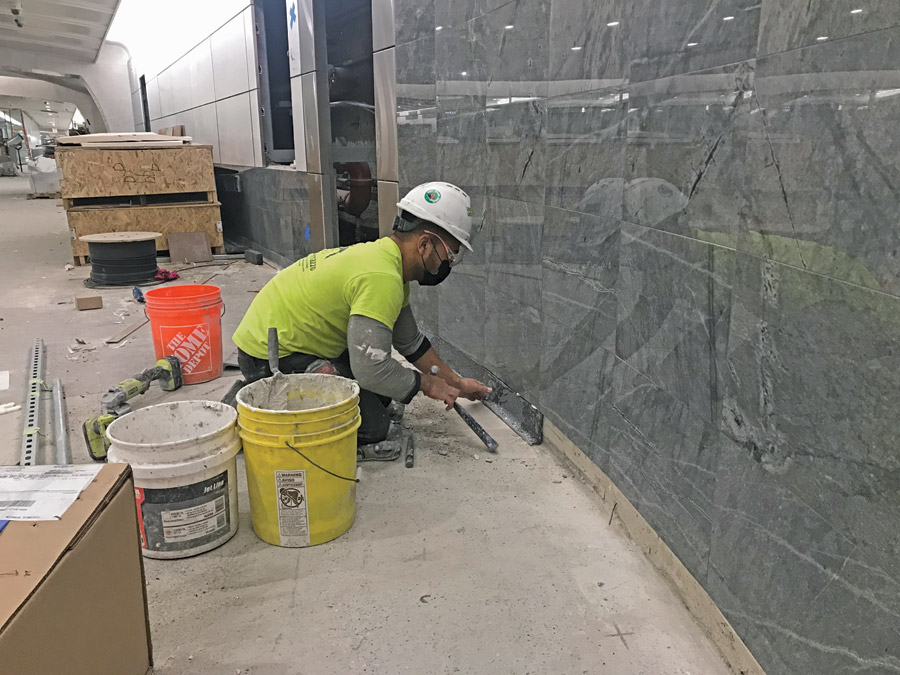 For contractors in the final phase, a main challenge is navigating the tight completion deadline, supply chain disruptions and the need to coordinate closely with other trades, says John Murphy, vice president and project executive at PJS Group, which is completing lighting, seating, signage and other final enhancements in the new Grand Central concourse and station, which has four platforms and eight tracks on two levels.

“There are other trades around, but the MTA knows where everybody is going to be,” Murphy says. “It does require very specific scheduling. It’s understood [that]you may not get to the area today, but it’s got to get done.” 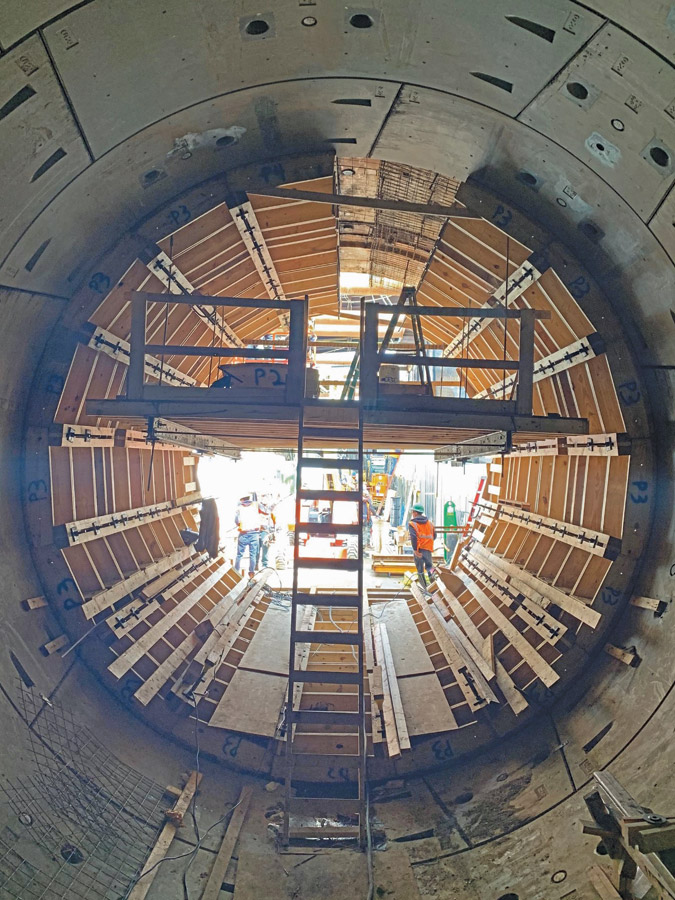 East Side Access, in its current form, got underway with planning in the late 1990s, substantial funding in 2006 and the first tunneling contracts in 2007, when a Dragados-Judlau joint venture fired up the first tunnel-boring machines. At that point, the project had already eclipsed the earliest $3.5-billion budget estimate and its original 2010 completion timeline. It would undergo several more shifts in scope, budget expansions and resetting of schedules over the years.

Major tunneling work took place through four contracts between 2007 and 2012 on both the Manhattan and Queens sides of the East River, connecting to the 63rd Street tunnel built in the 1970s with an East Side Access-like service in mind. Contracts to dig out station caverns largely finished in 2014 after removing 1.5 million cu ft of muck. Construction on two miles of tunnels under Harold Interlocking in Queens—the busiest passenger train connection point in the U.S. with 750 trains daily from four rail services—and on three major ventilation plants in midtown Manhattan all took place during the middle of the last decade.

Various studies and news articles over the years have analyzed the project’s evolution and cost escalation, in some cases blaming sprawling contracts or mismanagement. But with most of the big work done, MTA leadership in 2018 set out the current completion timeline with another project reprogramming—and the job appears set to finish on that schedule this year. 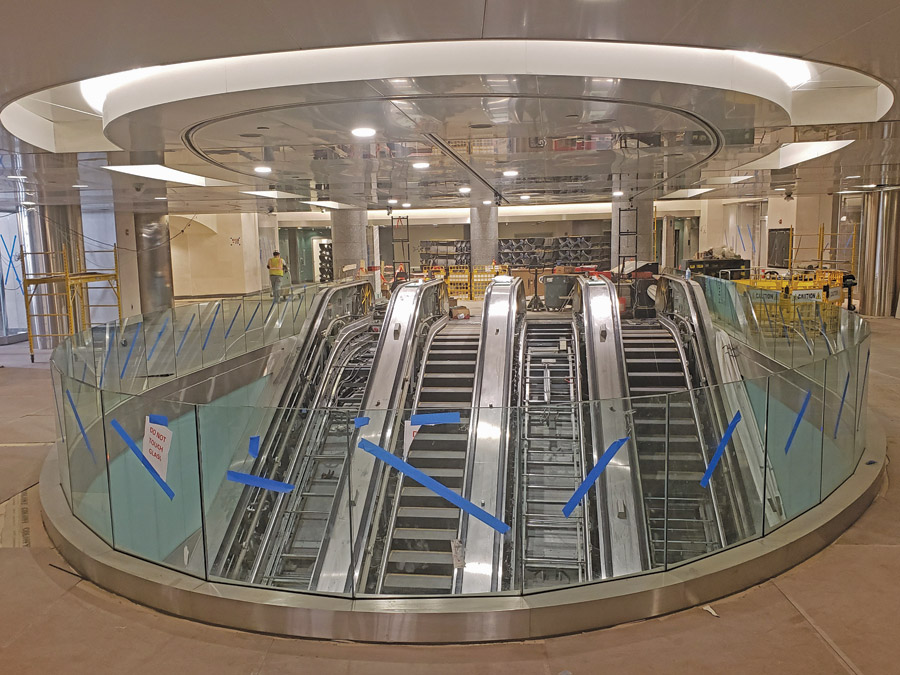 Much remaining work—connecting tunnels, track work, maintenance and storage yard infrastructure, safety and control systems, crew quarters, operations infrastructure and station finishes—took place over the last few years, with many contracts wrapping up in 2021 or early this year.

The anticipation now is on the project delivering its stated goal—saving time for Long Island commuters who today flow into Penn Station on the west side of Manhattan and then take subways or buses to get to their jobs on the east side. East Side Access will also double LIRR’s capacity to 24 trains per hour, shorten travel times for Queens residents and reverse commuters out of the city, relieve Penn Station congestion and expand access to city airports.
The work that has been completed to date is impressive from a construction perspective, according to Troup.

“Having seen the work that preceded me, seeing what it was before and how it turned out, it’s quite frankly a world-class environment,” he says. “Just the tunnel caverns—we’re 150 feet below street level, but you have arched structures, higher ceilings than what you’d expect, really good lighting.”

Project statistics are notable on any scale: 40 miles of new track, 13 miles of newly dug tunnels; a storage yard for 300 railcars; 97 new track switches and five new steel bridges at Harold Interlocking; 17 high-rise escalators, each 182 ft long; 550 miles of cable; a modular CO8 traction power substation; and even a pocket park on 50th Street atop a ventilation structure.

Even as the station and rail infrastructure are set to come online later this year, there are contracts pending with related projects and tasks. An MTA subsidiary overseeing the station recently issued a new RFP for an operations and maintenance contractor to run nonrailroad assets, such as ventilation fans, chiller plants, major electrical equipment and cleaning services. A temporary services contract for the same scope has been out since last year to ensure coverage when the station opens.

MTA also has tunnels under construction at Harold Interlocking, notably the Eastbound Reroute and Westbound Bypass projects, which are no longer formally part of East Side Access and whose completion is not necessary to get the new station open. 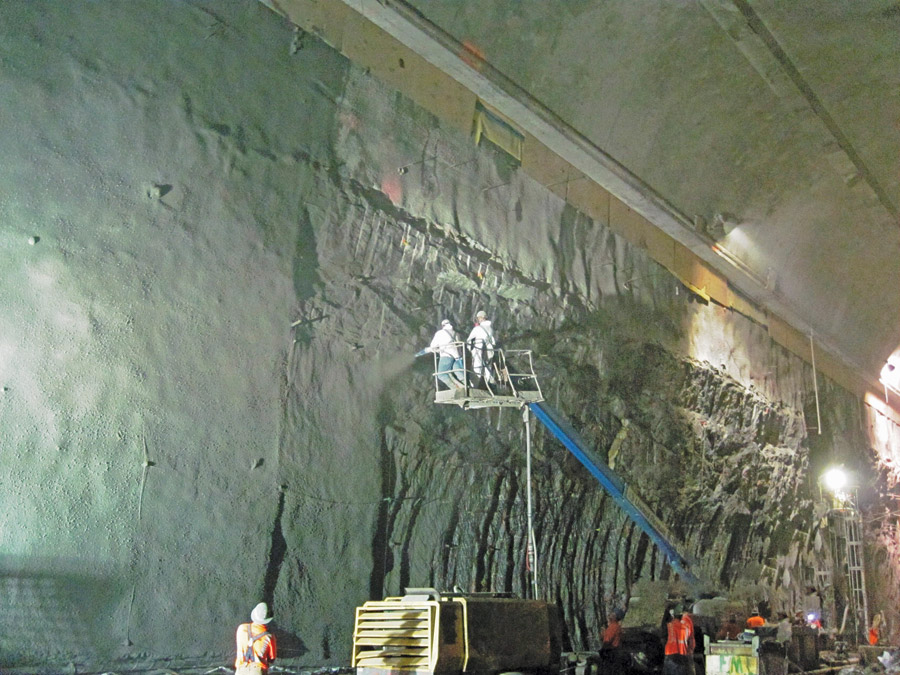 Operational testing is already complete for some features, including the traction power, blue light and conventional signal systems, but it is ongoing for others, such as the tunnel ventilation fans, smoke extraction devices and some Queens infrastructure, Troup says. “We’re really deep into the testing phase” of many of the integrated systems, he says.

Other ongoing testing involves the centralized traffic control system, on which the Jacobs team is working, Ajdinova says: “[That] involves control and monitoring of the trains from the control room located at Grand Central.”

Another big ongoing effort is “physical characteristic training” for engine and train crews—essentially giving them a test run on the rails, Troup says. “They need a certain amount of stick time on the trains to see where the ventilation shafts are, how the interlockings are laid out and how the train handles itself through the tunnels,” he explains.

The construction team still is installing some features of a positive train control system and has completed about 40% of testing for that safety feature, which aims to prevent collisions. It also is working on plans for live-action simulation exercises with local first responders. Most testing will wrap up at the end of the third quarter or beginning of the fourth quarter, Troup says.

The new station will be a signature feature of the completed project, blending its own modern character with echoes of its historic upstairs neighbor, Troup says. “It’s a different space from Grand Central but retains some of the historical aspects,” he says. “It complements it very well.”

A passenger concourse just below street level will offer new street-level entrances, 25 retail storefronts, art installations and digital signage while connecting to the trains below via dozens of elevators and escalators, which lead to two upper platforms, a mezzanine level and two lower platforms that are 140 ft below Park Avenue.

Final fit-out efforts on the station today aim at alterations to already finished work, in part because some designs date back to “when we still ran Commodore 64 computers,” Troup quips. The changes address shifts in passenger expectations and tastes, for instance updating space to remove some ticket windows but install automated ticket stations, while also adding seating and creating better waiting areas, he says.

“We asked, ‘How do we modernize this into a 21st-century facility?’” he says. “We want a more modern feel, a more modern environment, not just for the aesthetics but also for the function of it.”

A central piece of that contract is installing accent lighting throughout the concourse, cutting into the existing ceiling to add new light coves that will shine on the walls and stone, Murphy explains. His team is also adding advertising and artwork light boxes and wayfinding signage throughout the concourse, especially to help people at platforms figure out where they will exit at street level, he says.

PJS also is adding a 37-ft-long map of the LIRR service network near the ticketing area, Murphy says. “That’s going to be the ‘wow’ feature,” he says. “That seems to be a centerpiece. We’re even going to make it a bit more interactive—it’s going to be a thing people will really notice.”

Boxed-In NY Hospital Project Thinks Out of the Box