This website requires certain cookies to work and uses other cookies to help you have the best experience. By visiting this website, certain cookies have already been set, which you may delete and block. By closing this message or continuing to use our site, you agree to the use of cookies. Visit our updated privacy and cookie policy to learn more.
Home » Team Uses Integrated Design-Build for New Greeley West High School
Mountain StatesMountain States Construction Projects
Digging Deeper | K-12 Education

When students arrive at Greeley West High School this fall, they will be greeted by a completely transformed campus featuring classrooms filled with daylight for the first time in the school’s history.

The $124-million design-build project is being brought to life through an innovative partnership between architectural firm Hord, Coplan, Macht and general contractor Adolfson & Peterson that shaved a year off the design schedule. And it’s being constructed with 1,750 students attending classes on site.

The project is on track for completion this summer, at which time the existing building will be demolished to make room for new parking lots that will welcome students and faculty back to their new and improved school. 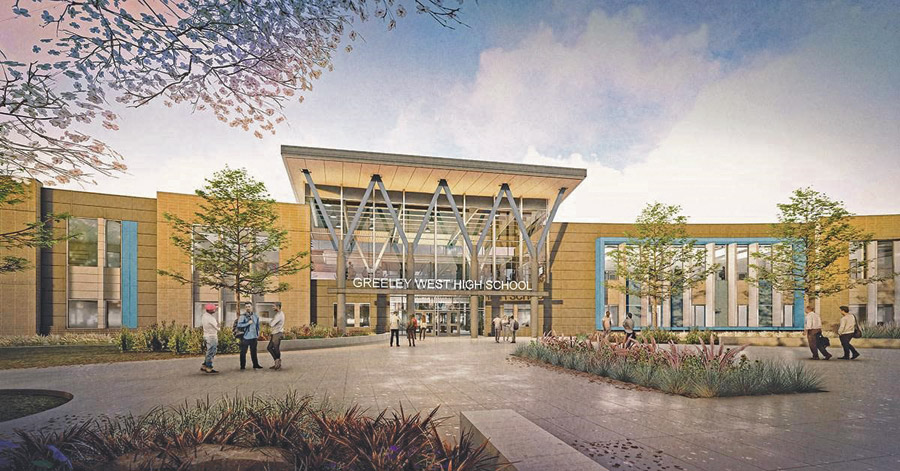 The curved facade of the new plan offers a security advantage with clear, controlled lines of sight from the main entrance.
Image courtesy HCM

The Greeley West project is one of several district-wide needs approved by Weld County, Colo., voters in 2019 as part of an ambitious $395-million bond measure. “The old 1960s era school—a concrete octagon-shaped bunker—is dark and dingy and has just two classrooms with windows, which was not a good learning environment,” says A&P construction manager Christopher Meek.

“From a form aspect, [the old school] was interesting to look at, but it was all concrete and inflexible spaces,” adds HCM principal Matt Porta, the project’s lead architect. By contrast, the new school is designed to embrace outdoor light in all but two classrooms, and even those two are connected to labs with windows, he says.

The original high school’s architect had repeated similar building forms for numerous schools. With only a handful of those remaining in use, there was concern that Greeley West’s historic status could stand in the way of its removal. Once that obstacle was overcome, the primary challenge was to determine how to fit the new school on the campus while keeping the existing building operational throughout construction. 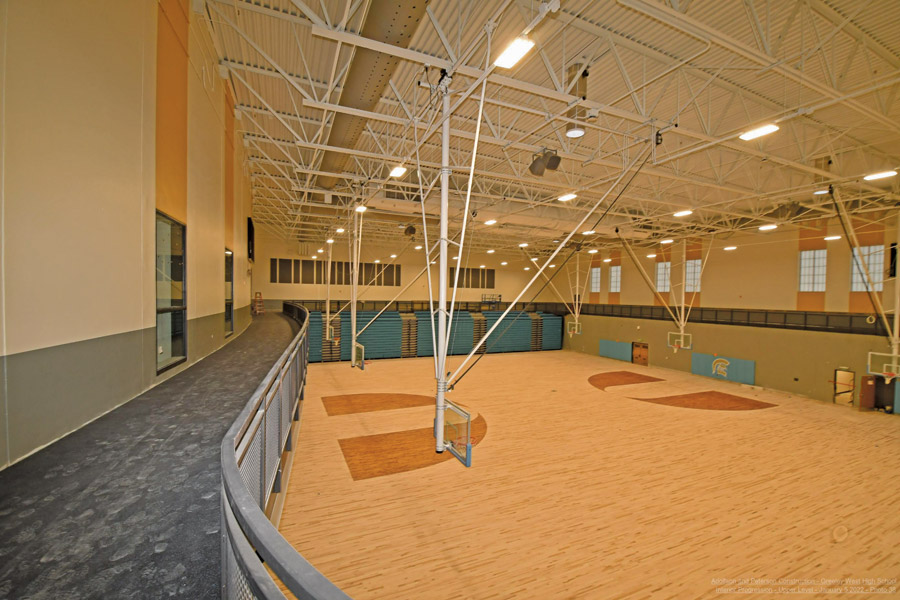 “Building on an occupied site created one of the biggest challenges, as there was nowhere to take the kids to do a demo and rebuild,” says Kent Henson, assistant superintendent of support services for Weld County School District 6. “The solution was to wedge the 270,000-square-foot building into the space between the existing building and the athletic field, and that has resulted in 100% of the project being built with 1,750 kids within an arm’s reach.”

An arc-shaped design keeps the building at the heart of the campus, where the new structure weaves between the current athletic field to the west and the existing school building to the east. Porta says the entrance was hard to find in the original building, and the curve of the new plan not only provides a clear and graceful building organization but also offers a tactical security advantage with clear and controlled lines of sight. The entryway leads to a secure vestibule where visitors immediately check in with someone in administration. From there you can look through the hub into a two-story open and airy space with access to an outdoor courtyard.

“We saw the arc as an opportunity to pick up on the school’s [International Baccalaureate] curriculum theme,” Porta says. From the hub, the circular path of the arc allows for an international market of education, with a unique entry point or interior design element to express each of the various subject matters and opportunities offered within the school. 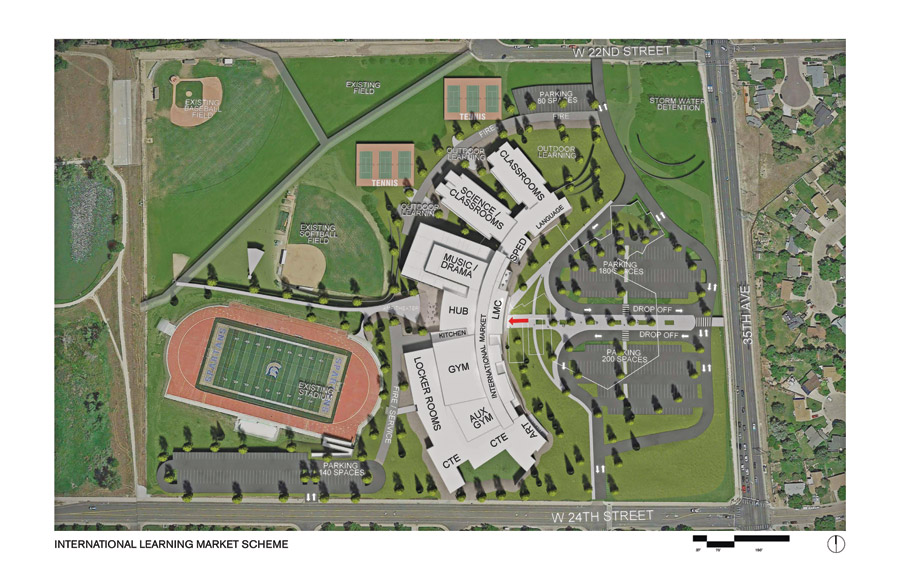 The building is designed with three different floor levels, but at no point is it a three-story building. The main level connects through the whole school and reacts to a 20-ft grade change across the site resulting in it being at grade with the lower level on the north half of the building. At the south end, there is a second floor above the main level.

“Building on an occupied site created one of the biggest challenges, as there was nowhere to take the kids to do a demo and rebuild.”
— Kent Henson, Assistant Superintendent, Weld County School District 6

The building is constructed with 55-ft-tall precast panels that sit on top of a 30,000-sq-ft, cast-in-place structured concrete deck. The process of sequencing the pouring of the decks to accommodate precast concrete erection while keeping structural-steel erection moving on the other sides of the building created logistical issues, explains A&P senior superintendent Kyle Tillery. This, coupled with the existing occupied building blocking access on one side, meant everything had to be done on the west side of the building with concrete trucks, pump trucks, rebar cranes, precast cranes, steel cranes and so on.

Part of the challenge was not only to phase construction around the occupied site but also to phase work tasks around the availability of materials, like steel. Because it’s a very large building, A&P was able to move some of its subcontractors around instead of having to wait on material delays. 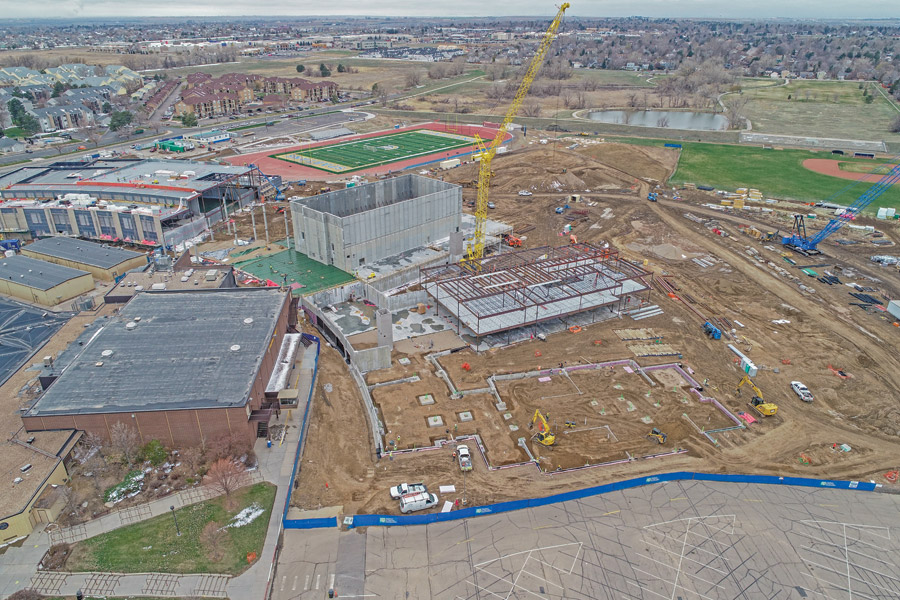 The team’s collaborative efforts during the design phase shaved an entire year off the project schedule. “We won the project and had our kick-off meeting with the school district on December 9 and immediately started the design on December 10,” Meek says. “We had the main team identified going into the interview to win the job because we wanted to go into this with a true design-build approach. We gave our mechanical, electrical and structural partners design responsibility and worked with HCM and our design consultants for code compliance and final design coordination. We literally got the details from the people who were building it.”

The “hyper-integrated” process helped speed up construction; six months later the team was on site building the project. “The opportunity to get all of the team members together early and in conversation took a year out of the process,” Porta says. “The biggest benefit is that it allowed us to sequence and get things started sooner. As designers, the ability to have conversations with trade partners early helped us to be better designers knowing issues from the construction side. We were able to ask questions and get feedback early on so there was no redrawing.”

Adolfson & Peterson had just started interviewing trade partners in early March when COVID-19 hit, sending everyone home to complete the bulk of the subcontractor interviews remotely. Tillery says this provided both lessons and opportunities for the team. “During the design process, we learned to do a number of pull plan schedules remotely,” he says. “We ultimately learned that we don’t need to do pull plans in person—and moving forward we can apply this beyond the design process as well.”

“Working remotely also gave us a lot of ears and voices in meetings to be sure we weren’t missing anything,” Porta notes. “This was both the silver lining and challenge of 2020. It allowed everyone to call in and participate. There were no travel or weather logistics to work around. If we hadn’t been forced to [meet remotely] we might have missed some of those key voices.”

Another benefit of working closely together early on was that the team quickly hit the market, procured materials and held pricing, Meek says. “Materials were going up due to the pandemic and supply chain disruptions, but we had our subs in line to get the commodities locked in before they went crazy, saving taxpayer dollars.” The project has stayed on budget and on schedule, something Meek attributes to the extremely collaborative design-build process.

“It has been fun to witness the amount of team member integration—from bringing firms on early to assist in the design process to seeing the collaboration between some entities that never get to do that. Some contractors never have the chance to understand how things come together in the design—[these subcontractors] got to peek behind the curtain into all of the thought and planning and why things work the way they do,” Tillery says.

“It’s fun to look back and say, ‘How did we do this?’ We wanted to deliver the best building in the long term, and even though we knew this [process] would be harder on us, we did it anyway,” Tillery says. “There’s no doubt in my mind that we will do more of these types of design-build projects.”