Montana’s Bob Morrison, described as “the” engineer in water and wastewater treatment, never thought he would run his family’s firm

For people who believe in fate, two things about Bob Morrison might seem preordained.  First, he followed his father and grandfather to become a widely admired civil engineer.

Second, he followed them to the only college he ever considered—Montana State University (MSU), in Bozeman.

Oddly enough, no one, not even Morrison himself, initially predicted he would lead Morrison-Maierle, the Helena, Mont.-based engineering firm that his grandfather, John Morrison Sr., founded in 1945. After earning his master’s degree in civil engineering from MSU in 1978, Morrison spent a dozen years with CH2M Hill before his family’s company recruited him to open an office in Great Falls, Mont., in 1991. Only in 2006 did he become president and CEO of the fast-growing organization—and he had to interview for the job.

The long road carried him to industrywide respect. Nancy Cormier, a retired Morrison-Maierle colleague who once worked for another firm, says Morrison’s competitors considered him “the” engineer in his specialty of water and wastewater treatment.  The path also has led to his selection as ENR’s 2021 Legacy Award winner for the Intermountain area. He is the first Legacy Award recipient from Montana. 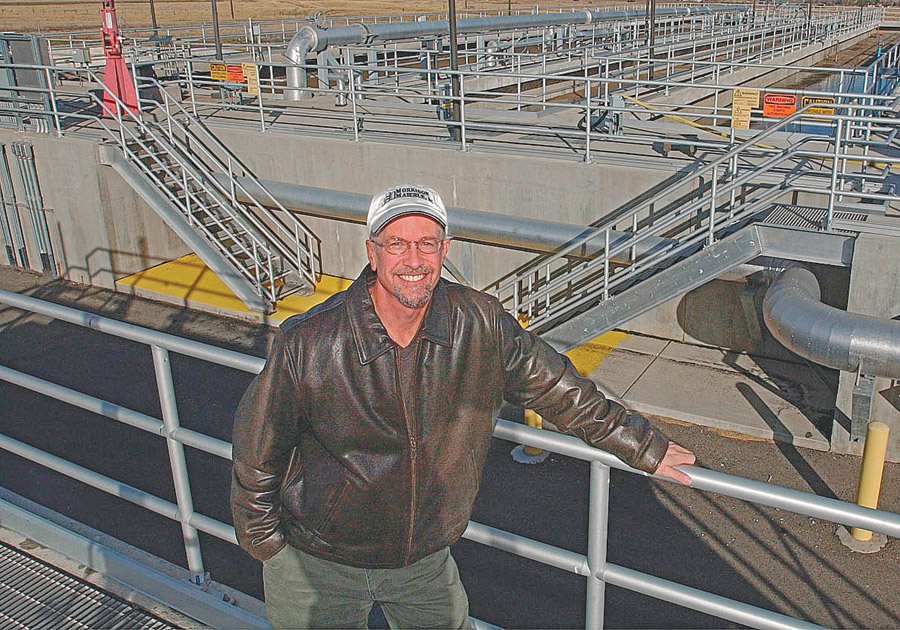 Morrison has long been renowned for his expertise in designing dozens of water and wastewater treatment plants throughout his career.
Image courtesy of Morrison-Maierle

The annual award, which recognizes lifetime achievement and leadership in architecture, engineering and construction, isn’t the only pioneering accomplishment for the Morrison family. Before starting the company in his basement with partner Joe Maierle in 1945, John Morrison Sr. held Montana’s first professional civil engineering license while designing bridges for the state’s transportation department.

John Sr., who died in 2003 at age 101, also began the family’s love affair with Montana State University. His parents settled in Connecticut after emigrating from Scotland, and in the early 1920s, John and his brother Neil decided to see the country. Their money ran out in Montana, where John found a job with a surveying company.

Interested in engineering but lacking a high school diploma, John Morrison challenged most of MSU’s qualifying coursework. He earned his bachelor’s degree in civil engineering with honors in 1927, stayed on to teach until 1930, and finished a second degree in 1931. The school awarded him an honorary doctorate in 1968. 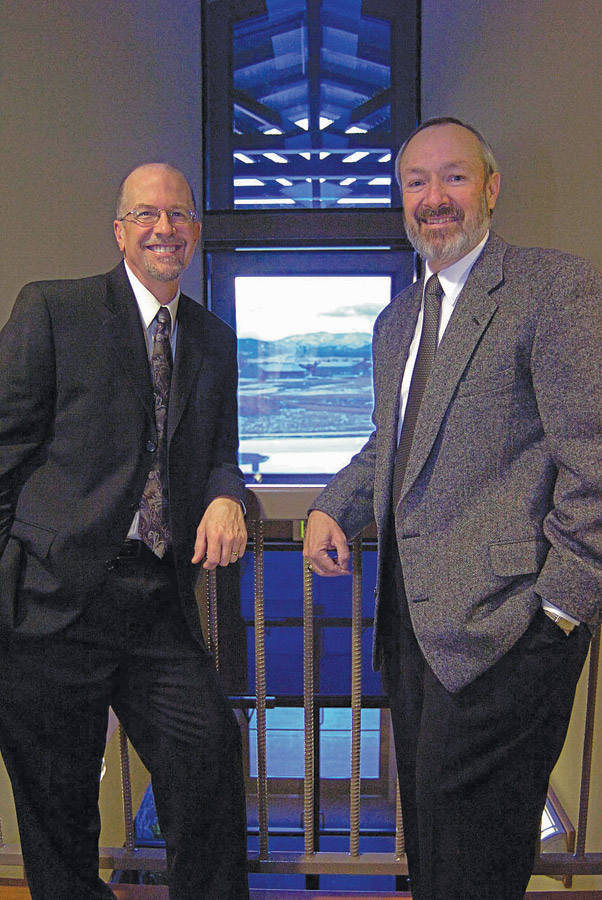 Today, as a third-generation alumnus, Bob Morrison remains deeply involved with the university as a donor, adviser, sports fan and former member of the alumni foundation’s board of governors. In separate interviews, two sources volunteered that Morrison “bleeds blue and gold,” MSU’s school colors. One also said he had never heard Morrison utter a cross word about anyone or anything, with the possible exception of MSU’s main rival, the University of Montana.

Morrison’s wife, Kathy, jokingly calls her husband’s attachment to MSU and, especially, its sports teams, “excessive.” The couple moved a few years ago from Helena to Bozeman and now resides just two miles from the MSU campus, which they visit frequently as season ticket holders for Bobcat football and men’s and women’s basketball games.

Growing up in Helena, the pair became high school sweethearts in their junior year. The story goes that Bob liked Kathy but was too reticent to ask her out.  Finally, friends shoved him into a hallway at school just as Kathy was approaching. Four summers later, in 1976, they embarked on a commuter marriage. Bob drove 100 miles every weekend from MSU to Helena, where Kathy was completing her bachelor’s degree in nursing at Carroll College, a small liberal-arts institution.

“He was so smart and efficient with his designs, and he was always willing to mentor.”
— Nancy Cormier, Retired Engineer, Morrison-Maierle

After 45 years, Kathy laughs that it’s “working out OK.” A mutual friend, Helena Chamber of Commerce President and CEO Cathy Burwell, is more direct. She says, “Bob is still as in love with her as he was the day he met her.  He worships her, and she worships him.”

That wouldn’t surprise most people who know Bob Morrison. Friends, colleagues and other associates say it’s his warmth, sincerity and thoughtfulness—he’s still a bit on the quiet side—that make him an effective leader. Cormier recalls cleaning out her desk when she retired and finding a 5-in.-high stack of appreciative notes that Morrison had jotted to her over the years.

Dan Wetstein, a retired engineering executive, former college roommate and lifelong friend from Helena, says Morrison leads simply by getting things done.  Morrison, he says, never aspired to be president of MSU’s student chapter of the American Society of Civil Engineers. “But when a need arose,” Wetstein says, “he continued to work his way up.”

Others point to Morrison’s twin talents for engineering and teaching. “He was so smart and efficient with his designs, and he was always willing to mentor,” Cormier says.  Adds Craig Nowak, who worked for Morrison in Great Falls and succeeded him as operations manager there, “He brought out potential I didn’t know I had.” 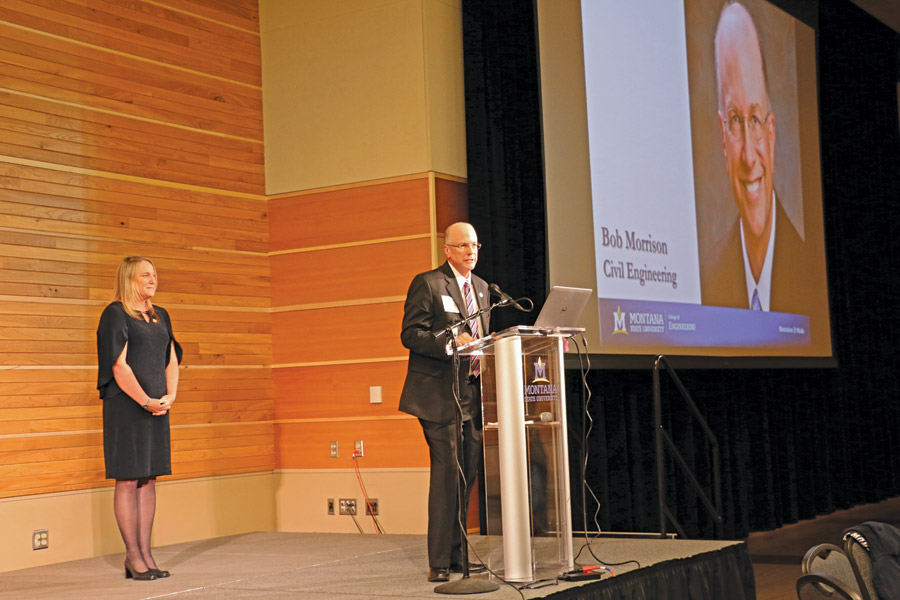 Morrison has served his alma mater, Montana State University, as a donor, adviser and member of the alumni foundation’s board of governors.
Image courtesy Morrison-Maierle

Calm in the Storm

Morrison is also known for keeping his head.  Burwell portrays him as “always the calm of the storm” during his six years on the Helena Chamber of Commerce board of directors. Chris Murray, head of MSU’s alumni foundation, says, “If you need somebody in a foxhole with you, he’s the guy.”

Morrison may have felt as if he were taking enemy fire just two years after becoming Morrison-Maierle’s president and CEO in 2006. The company had been expanding, but the Great Recession of 2008 hit hard. Morrison had to lay off almost half of the company’s approximately 450 employees and describes the period as “certainly the hardest part of my lifetime.”

Through it all, Murphy says, “Bob was never panicked. He was always consistent.  We went through some tough times, but he was always that same kind person, even when it came to some really tough decisions.”

As the company emerged from the crisis, Murphy says, Morrison led the staff through “one of the most comprehensive and inclusive strategic-planning efforts I think we’d ever had.” That exercise eventually resulted in significant growth, including Morrison-Maierle’s first acquisitions outside Montana. The Oglala Sioux tribe recognized Morrison with this star blanket after water from the Mni-Wiconi Rural Water System that he designed first reached the reservation in Pine Ridge, S.D.
Image courtesy Bob Morrison

Morrison handed the keys to Murphy in 2016 and stayed to advise and also address what he considered a long-overdue task—crafting a heavily detailed set of engineering specifications that captured the company’s decades of knowledge from myriad projects. He finished just in time to observe his official retirement at the end of last year.

Of all his many satisfying endeavors over a 43-year career, Morrison says one stands out—a roughly four-decade effort to bring clean drinking water and advanced wastewater treatment to the Oglala Sioux reservation in Pine Ridge, S.D.  Conceived in the 1980s, even before Morrison joined the company, the Mni-Wiconi Rural Water System was completed in 2015. (In the Oglala Sioux language, “mni-wiconi” means “water is alive.”) According to the Morrison-Maierle website, the project serves 50,000 people spread across 12,500 sq miles and is the largest rural water system in the U.S.

The entire community turned out when the water reached the reservation. For leading the water-treatment design and serving as senior engineer for the rest of the project, Morrison was presented a hand-stitched Oglala Sioux “star blanket,” a quilt emblazoned with an ornate, eight-point figure. Among other things, a star blanket symbolizes honor and generosity and recognizes elders and those who achieve greatly.

The event sparked an epiphany for Morrison, who recognized, perhaps more than ever, the power of engineering to improve people’s lives.

“Sometimes, as engineers, we get focused on the technical details, and that’s obviously important,” Morrison says. “But we kind of lose sight sometimes of the big picture. And that project really reinforced that the job we do really does benefit society.”