This website requires certain cookies to work and uses other cookies to help you have the best experience. By visiting this website, certain cookies have already been set, which you may delete and block. By closing this message or continuing to use our site, you agree to the use of cookies. Visit our updated privacy and cookie policy to learn more.
Home » Best Renovation/Restoration and Project of the Year Finalist: CALA
ProjectsNew EnglandNew England Construction ProjectsBest Projects2021
Best Projects

Once a fortress-like bunker, the former Powder House Community School was transformed into an inclusive, intergenerational urban village through the extensive collaborative efforts of the CALA project team.

Following six months of public meetings and two years of preconstruction, the team devised a 91,000-sq-ft mixed-use development with a half-acre park accessible to Somerville residents.

A critical element of the design was retaining as much of the original concrete structure as possible while adapting it for new uses. “It was a Tetris match of strategically removing pieces of precast, floors and beams to change the function from a school to a multifamily residential complex,” says Nathan Peck, president of Kaplan Construction.

In many cases, structure was left exposed, which created waterproofing challenges. The team reviewed every joint and connection, resulting in more than 30 unique waterproofing details that were engineered to close gaps in the exterior envelope.

More than 10 insulation details were conceived to reduce the number of thermal breaks throughout the concrete. Additionally, concrete floors were ground and polished for reuse and precast planks became finished ceilings in portions of the building.

Some structural upgrades had to be made, primarily to meet seismic code, such as additional shear walls and column reinforcing. An existing central courtyard on the garden level was redesigned as an elevated courtyard with a resident garage underneath. 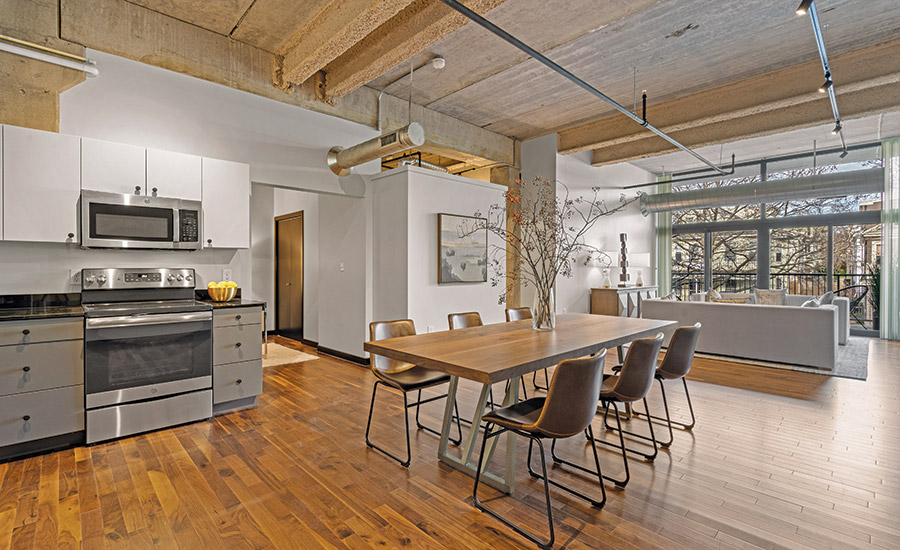 To create the additional courtyard, parts of the existing concrete plank flooring were cut and removed. Prior to demolition, crews reinforced the structure with steel plates and shear walls to stiffen elements that could be vulnerable to collapse.

Steel fabrication and installation required extensive field measurements of the existing structure. With no standard sizes throughout the building, every piece was custom-made. Ground penetrating radar was used to analyze every concrete connection point and determine individual fastener locations for more than 800 pieces of newly fabricated steel. Roughly 30% of locations had to be modified on the fly.

Partially a result of retaining the structure, the vast majority of the project’s 48 residential units are unique in layout, requiring 225 different window types. “There were very few repeating window types,” recalls Jacqueline Maloney, project manager at Kaplan. “That took a lot of organization.” 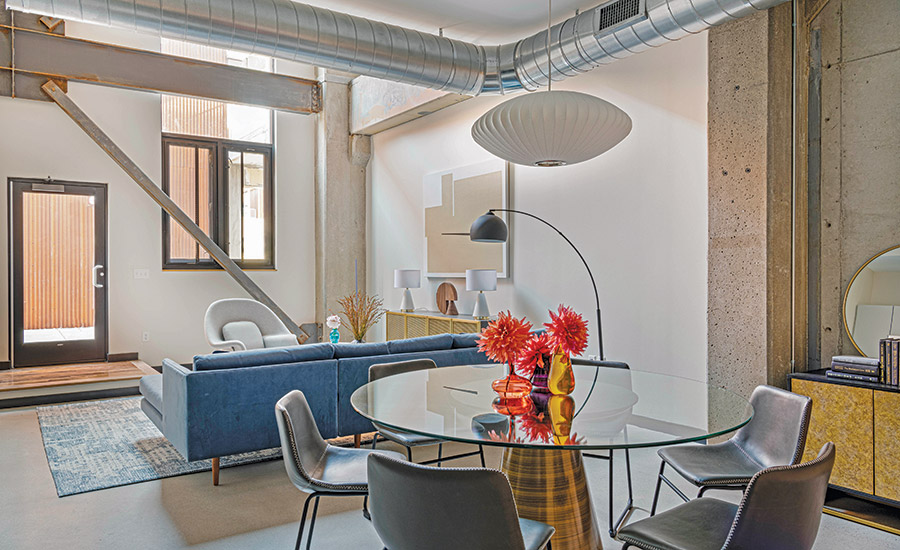 Peck says the team collaborated for months to conceive the new exterior, working through four different concepts. “There was a lot of strategizing on envelope materials and how to meet energy code, but do it economically,” he adds.

New EPDM and TPO roofing was installed throughout the project, along with a 21,000-sq-ft green roof. Crews also added a 20,000-sq-ft photovoltaic farm to the roof.

In addition to residences, the project features five commercial properties with more than 23,000 sq ft of office space with tenants including two architecture firms, music studios, and a tech firm.