This website requires certain cookies to work and uses other cookies to help you have the best experience. By visiting this website, certain cookies have already been set, which you may delete and block. By closing this message or continuing to use our site, you agree to the use of cookies. Visit our updated privacy and cookie policy to learn more.
Home » Best Project Small Projects SOS Children’s Villages/Illinois’s Roosevelt Square
ProjectsRegionsMidwestMidwest Construction ProjectsBest Projects2021
Best Projects

To create the new 11,000-sq-ft SOS Children’s Villages Illinois - Roosevelt Square Community Center, the team designed and built a single-story cross-laminated timber superstructure—with columns, beams and a roof structure that were all executed using CLT. As one of the first large such projects built in the Chicago area, the team had to navigate unfamiliarity with the permit review process. A local erection company and carpentry union had to coordinate training efforts to improve its understanding of how to work with the material. Lendlease also had to solve coordination challenges between the CLT structure and supplemental steel used for canopies and window headers. 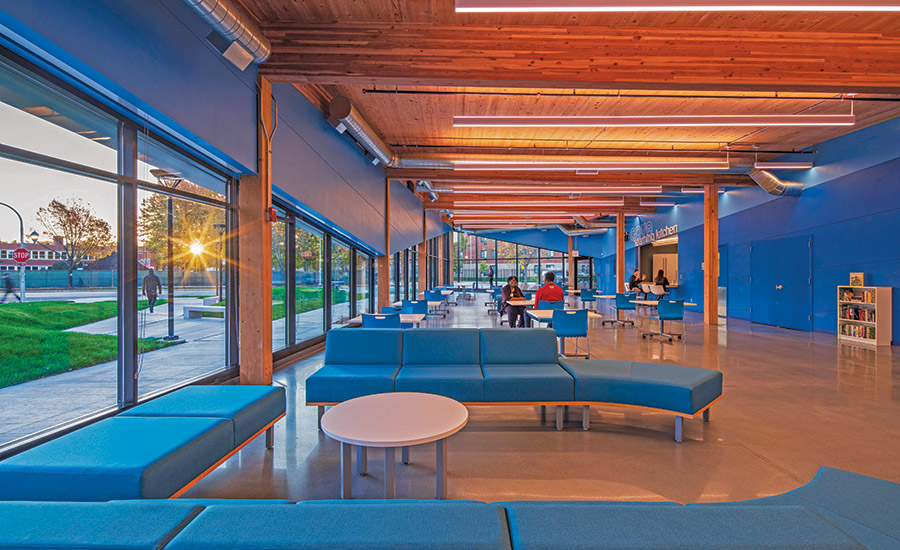 CLT loads were erected using a crane with carpenter erectors working from manlifts instead of ladders to improve safety. For the CLT roof modules, temporary perimeter railings were installed on each panel before the roof modules were lifted from the ground. The strategy allowed the erectors who were fastening down panels to work safely near an edge with perimeter railings already in place. During the project’s 21,303 work hours, no lost-time accidents or OSHA recordable incidents were tallied.

The center, which completed in October 2020, provides office spaces and a community center with a culinary kitchen for training purposes and learning labs.