This website requires certain cookies to work and uses other cookies to help you have the best experience. By visiting this website, certain cookies have already been set, which you may delete and block. By closing this message or continuing to use our site, you agree to the use of cookies. Visit our updated privacy and cookie policy to learn more.
Home » Best Cultural/Worship: National Museum of the United States Army
MidAtlanticMid Atlantic Construction ProjectsMidAtlantic FeaturesBest Projects2021
Best Projects

National Museum of the U.S. Army


After more than 40 years of planning, design and reviews, the National Museum of the U.S. Army finally became a reality in November 2020. The 185,000-sq-ft, stainless steel-clad museum—which features thousands of pieces of art, artifacts, documents and images—guides visitors through every generation of the Army. Large items, such as a tank and a helicopter, were brought in early and built around during construction. 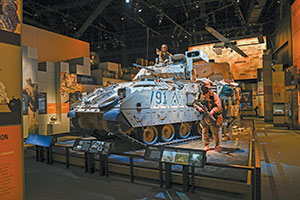 Located in Fort Belvoir, Va., the project is set on 84 acres previously used by the North Post Golf Course. The site lacked sewer, electricity, telecommunications and road access, so the team designed and installed an extensive network of utilities to support the facility. Water for domestic use and firefighting supply was provided from the north of the site via a 12-in. main more than 3,000 ft in length. Crews installed the water main alongside two functioning holes of the golf course. The alignment also passed under a sensitive wetland area, which required several hundred feet of directional drilling.

Mitigation of wetland impacts and stream and habitat restoration were integral parts of the project design. For example, the team designed and installed a mechanically stabilized earth retaining wall—more than 850 ft long and, at points, 30 ft tall—to minimize impact on a resource preservation area on the site’s west side.

To meet stormwater quantity and quality compliance goals, the team designed and installed underground infiltration galleries situated beneath impervious cover areas, such as parking lots and buildings. Three types of galleries were used, including 60-in. and 96-in. perforated corrugated metal pipe and 3-ft-high, open-bottom arched chambers. A total of nine galleries were installed, which were designed to captured runoff from up to a 10-year storm event, with no surface discharge during a two-year event.

“Not only were they just saying they did it,” one judge noted, “they were pretty specific with how they impacted the water.”

To provide direct vehicle access to the site, a new intersection with the Fairfax County Parkway was designed and built. For the intersection, the team worked with the Virginia Dept. of Transportation to coordinate a limited access control change that allowed a new signalized intersection serving the museum.

“Because it’s a greenfield site,” the judge said, “the fact that there is a lot of parking and a lot of building, and they were able to maintain that, to me, is pretty impressive as well as building mock-ups to resolve constructibility and sequencing. Of course, next to the function, it’s a pretty good looking building.” 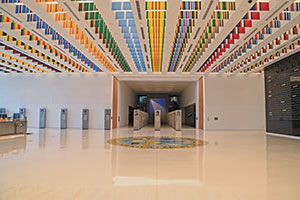 The completed LEED Silver-certified main building includes a series of five pavilions for specific functions—particularly exhibits and special events. Several floors of exhibition spaces  display selections from 15,000 pieces from the Army Art Collection as well as 30,000 artifacts, documents and images. Most of the artifacts have never been seen by the public. The building also houses a theater featuring a 300-degree screen.

Future plans for the museum campus grounds include a memorial garden, a parade field with grandstand and an interpretive trail. The museum is expected to welcome an estimated 500,000 to 700,000 visitors annually.

Award of Merit Cultural/Worship: The George Washington University Museum and the Textile Museum

Cultural/Worship: Award of Merit: Museum of the American Revolution