Big-D Construction has been selected as the contractor for the new Juniper Building on the campus in Herriman, a joint $57-million project of Salt Lake Community College and the University of Utah. The project broke ground on July 15 and is slated to open in 2023. The new campus will serve more than 2,000 students in its first year and nearly 7,000 by 2025 in the fast-growing cities of Herriman, Riverton, Bluffdale and Draper. Students can earn an associate’s degree from SLCC and then go on to get a bachelor’s degree from the University of Utah at the same location.

Big-D also recently completed work at the Orem Family Fitness Center, including a 130,000-sq-ft addition that features a multitude of amenities, including an elevated running track, racquetball courts, an indoor swimming facility, a bouldering wall and new locker rooms. While the majority of the project was a 96,000-sq-ft addition, roughly 32,000 sq ft of the existing facility underwent a significant remodel. 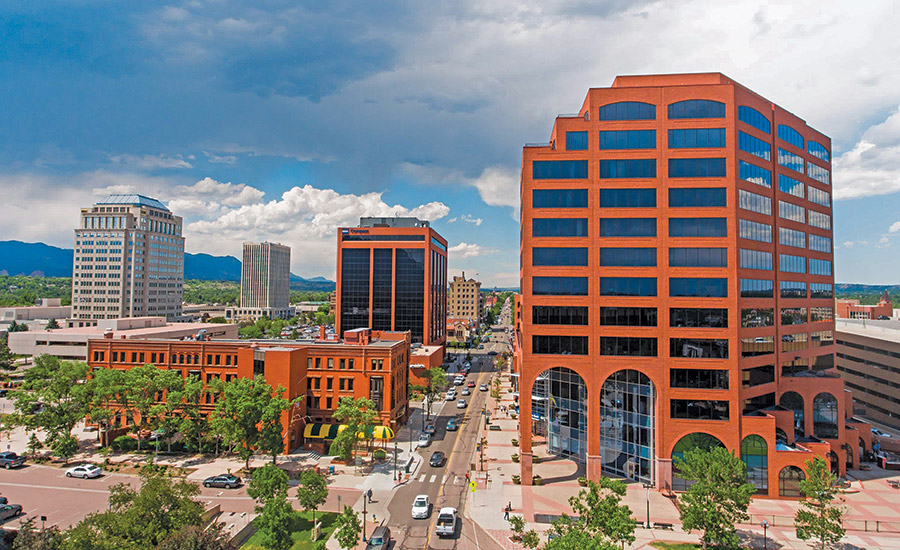 Saunders Norwood Construction LLC will be headquartered at the Plaza of the Rockies in downtown Colorado Springs. The firm has started work for a renovation to the fitness center in the office tower.
Image courtesy of Norwood Development Company

Since the Idaho Transportation Dept. ventured into the world of Grant Anticipation Revenue Vehicle (GARVEE) bonding more than 15 years ago, the department has sought ways to refinance and restructure that debt. The recent refinancing of $61 million of GARVEE series 2011A bonds at 1.1% resulted in a $15.5 million savings, ITD says. The refinancing took place at the same time as $159 million in new bonds were issued for project construction and financed at an interest rate of 2.33%. GARVEE bonding has allowed the agency to build expansion projects the public needs now rather than waiting decades for more traditional funding methods.

The 15,700-sq-ft Research and Innovation Laboratory (RAIL) will provide multipurpose lab space for cross-disciplinary research at the intersection of chemistry, materials science, bioscience and engineering in support of a breadth of energy efficiency and renewable-energy research areas, including 5,500 sq ft of flexible lab space. The project is expected to break ground in September.

All five lanes of inbound Peña Boulevard between Jackson Gap Street and the Jeppesen Terminal recently opened, improving the drive into Denver International Airport. Completing this section of Peña Boulevard, which includes new directional signage, is a significant milestone on the safety and operational improvement project. Inbound Peña Boulevard now has three through lanes as well as two dedicated travel lanes from the Jackson Gap Street on-ramp. These acceleration-deceleration lanes will help improve safety and traffic flow.

The city of Boulder has engaged Brown and Caldwell to provide professional engineering and design services at the city’s Betasso Water Treatment Facility (BWTF) to address aging infrastructure and enhance disinfection and corrosion control systems.

Built in 1964 and significantly renovated in 2018, the BWTF is Boulder’s primary drinking water treatment facility, with a capacity of 40 million gallons a day. The conventional surface water treatment plant is located in the foothills west of Boulder. It treats water from North Boulder Creek and Barker Reservoir.

The Terracon Foundation has awarded a $10,000 university grant to Colorado State University to help fund its ENpower Bridge and Peer Mentoring Program, which supports engineering students from underrepresented backgrounds in the transition to college.

CSU offers more than 70 undergraduate majors as well as graduate programs, with five of its eight colleges offering STEM-focused majors. The goal of its ENpower program is to increase retention and graduation rates for historically excluded students in engineering by providing early support.