To keep up with global shipping standards and stay competitive, the Massachusetts Port Authority launched the Conley Terminal modernization program in 2014.

As part of the $850-million effort by the agency, known also as Massport, the $215-million New Berth 10 project was designed and constructed to provide 1,300 linear ft of new space that can accommodate larger container ships—some up to 22 shipping containers wide.

The initiative presented the design and construction team with considerable challenges, with the new facility sited along the shoreline of a 32-acre contaminated former oil facility. In addition to working with contaminated soils, crews had to dredge the berth and blast and remove bedrock.

Because the project site is adjacent to a cruise ship terminal, a South Boston neighborhood and Logan International Airport, much of the work was under air-draft restrictions.

“We had every sort of challenge that a contractor could have on a project like this,” says Mark White, owner of D.W. White Construction. “There was never a dull moment.” 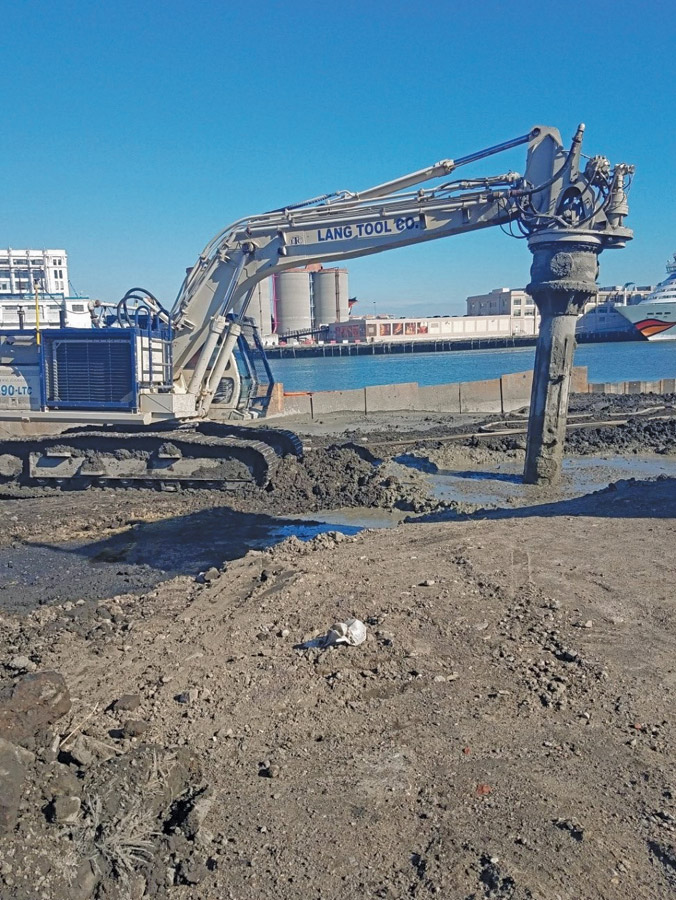 The team used in-situ stabilization of contaminated soil and dredge materials at the site of a former oil facility.
All photos courtesy Massport

A critical early consideration on the project, which broke ground in June 2018 and completed in November 2021, was remediation of existing contaminated soils at the former Coastal Oil facility site.

The large volume of soil, existing concrete and gravel and dredge spoils could create up to 86,000 cu yd of material that would have to be disposed off site. The team instead came up with a plan to test, manage, treat, process and reuse the soils on site.

The contractor suggested use of in-situ stabilization of soil and dredge materials. This created a firm subgrade material by using deep soil mixing of concrete and soils. Existing concrete was also crushed and added to the subgrade mix. “We made use of all the old concrete, all the old rocks, the ledge, the boulders, the jetty and just about anything you can mix up in there,” White says. 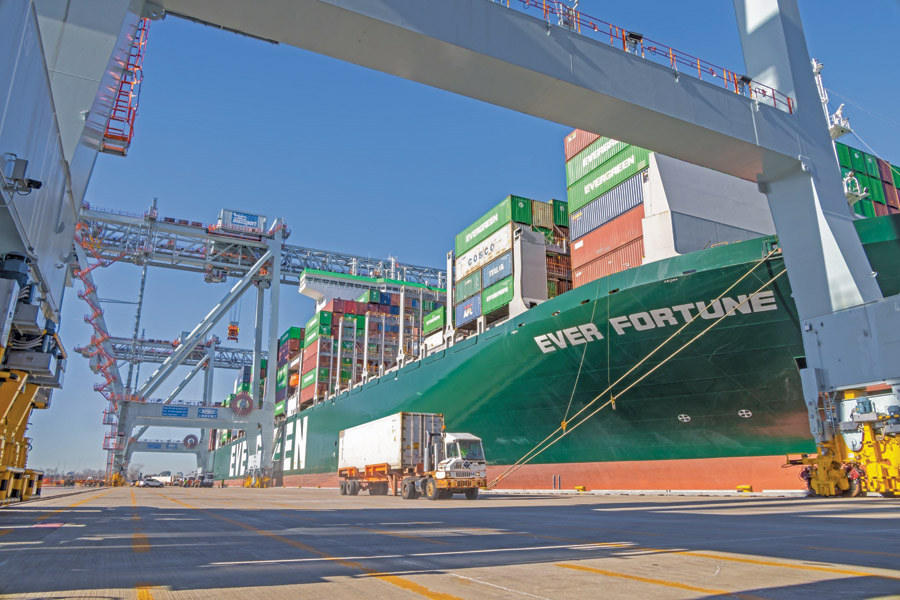 After the job was completed, commissioned cranes serviced the largest vessel to ever visit Boston Harbor—with capacity of 12,000 twenty equipment units (TEU).

Sheet pile wall with integrated in-situ stabilized soil created an impermeable barrier between Boston Harbor and oil contaminated soils to prevent seeps. As a result, the contaminants were contained to protect the harbor. In addition to eliminating the need to remove soils, the team also did not import clean fill onto the site.

Massport estimates that this eliminated 7,300 truck trips for offsite disposal and 4,900 truck trips for import of subbase material, particularly through adjacent residential neighborhoods. An estimated 48,650 gallons of truck fuel was saved, which also reduced air emissions. Combined, Massport estimates that the plan saved the project about $5 million.

One judge praised the team’s creative solutions to potential environmental impacts. “That was a big focus of the project, not just getting the new terminal in but remediating all the environmental damage that had been done previously,” the judge said.

Other soils had to be compacted to 1,000 lb per sq ft to accommodate infrastructure, including roads for port vehicle use and container storage areas. In addition to dredging the channel, the team also had to address shallow bedrock.

Members developed a plan that included mechanical rock removal, underwater rock blasting and a rock socketing process for a portion of the project’s 861 waterside piles. Mechanical rock removal was conducted within 50 ft of an existing structure, while underwater blasting was used for rock that was located within the dredge footprint. Environmental blasting mitigation measures included down-hole vibration monitors, limits on charge sizes and limits on peak particle accelerations.

During the underwater blasting phase, the team used observers to scout for fish and marine mammals to ensure they were not in the blast zone. A “startle system” kept fish out of the zone while small “scare charges” were used right before blasting to ensure that fish and marine mammals had left the area. The team also used bubble curtains around piles to minimize aquatic noise.

Blast sequencing used a 25-millisecond delay between holes to smooth out the blast wave to minimize peak water pressure and the impact on fish, says the team. Counts after each blast determined how well mitigation measures worked. It was determined that the longer the fish startle system was kept in the water, the lower the fish mortality rate was. The team was able to execute this approach by locating the system on the blasting barge. 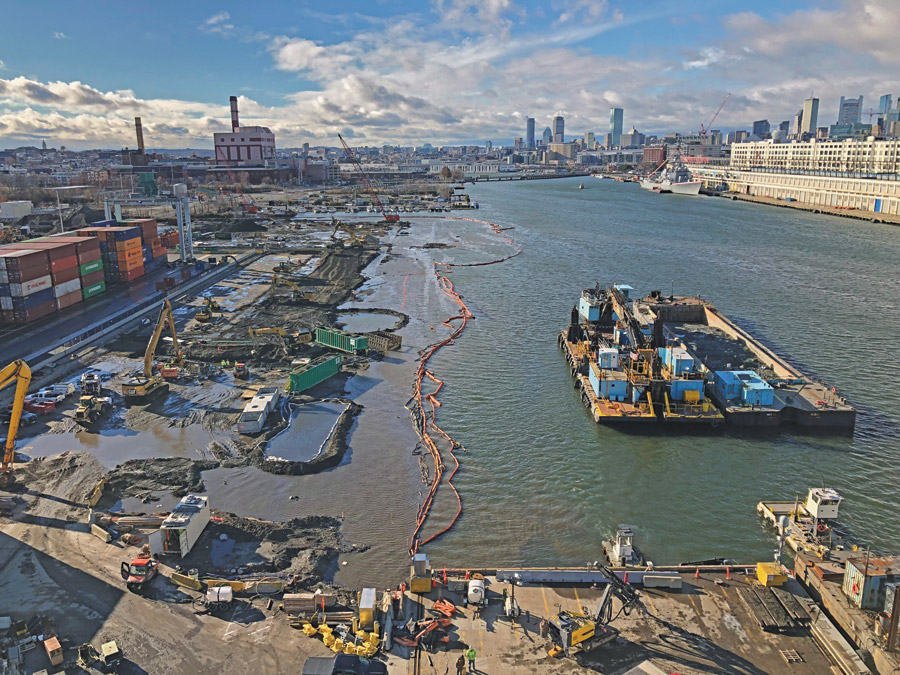 Underwater rock blasting can be a dangerous aspect of the project for construction personnel. A detailed blasting plan was prepared and reviewed by all parties. Multiple preconstruction meetings were held with emergency management agencies, with preconstruction inspections for all structures within 1,500 ft of the blasting location. Specific routes and timeframes were mapped out for transport, delivery and loading and offloading of explosives. Port Police, Boston Police and Massachusetts State Police all maintained a presence on site during blasting events to keep recreational boaters out of the blast area.

Berth 10 also had to be constructed and, ultimately, operated under air-draft restrictions of neighboring Logan Airport. Massport sited Berth 10 to the west of existing berths in higher airspace. Still, the contractor’s crane plan had to include close coordination with the Federal Aviation Administration (FAA) to gain the necessary permits.

New ship-to-shore cranes now operate on the facility. Massport specified three low-profile custom cranes. Two of these are each 205 ft tall with a lifting height of 160 ft and a width spanning 22 container rows. The other is 145 ft tall. Massport claims they are the largest and heaviest low-profile cranes in the world. Boston Harbor and Port Everglades in Hollywood, Fla., are the only two major parts in the U.S. that use low-profile cranes.

In addition to being sensitive to the airport and neighboring residential communities, the new Berth 10 site also is adjacent to a cruise ship terminal, so the team had to coordinate with its staff on ship operations.

As part of its project execution plan, Massport commissioned a 4D full-bridge navigational maritime simulation of Boston Harbor at the Maritime Simulation Institute in Newport, R.I. The agency simulated real-time conditions for arriving and departing vessels to determine how cruise and container ship traffic interacted in various wind, tidal and daytime and nighttime conditions.

A pile supported wharf, which was 1,275 ft long by 110 ft wide, was built with a 65-ton capacity ship-to-shore crane rail foundation.

The low-profile cranes are set up to run along the rail system. The deep foundation consists of steel sheet piling and 862 steel pipe piles. The piles range in diameter from 26 in. to 30 in. and are between 60 ft and 105 ft in length. The deck consists of 870 precast deck panels with a cast in place topping slab.

To ensure that future flooding at Conley Terminal will not impact the operation of the new Berth 10, several resilience measures were implemented during the design process. 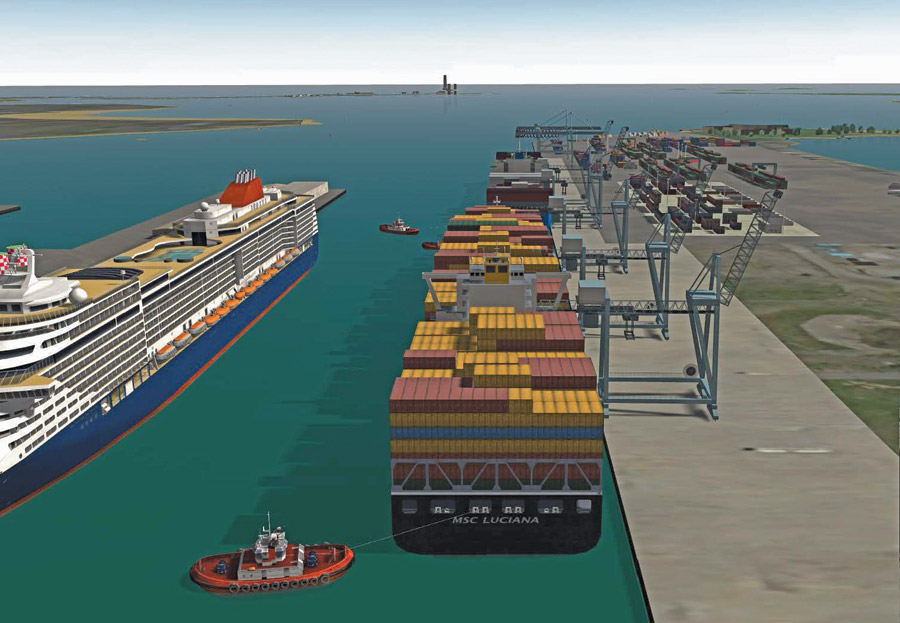 Additionally, the motors at wharf level were elevated out of the flood pathways, and gantry level electrical panels were designed so that they are easy to disconnect if a storm is forecast.

With these combined efforts, Massport claims that its ship-to-shore crane systems are among the most resilient in the world, according to the team.

“I was the most fascinated by this project,” remarked one judge. “It really is a once-in-a-lifetime kind of project. It’s massive, and its long-lasting impact is really impressive.” The judge noted systems built for future flooding and the project's impact on port expansion as "pretty substantial.”

Berth 10 deck and wharf construction was completed ahead of schedule in August 2020, allowing ample time for delivery of the three new ship-to-shore cranes, which arrived the following June. The ship-to-shore cranes were fully commissioned and operational by November 2021, ahead of the project’s end of that year completion target.

“It was a really good team effort between the contractor, owner and us as the engineers,” says Alan Pepin, project manager for waterfront structures at GEI Consultants. “We definitely took a collaborative approach on it throughout the duration of construction. The contractor wanted to work with us to make sure budget and schedule stayed on track. We were very fortunate about that.”