Cornell University had high expectations for the team on a five-building, 776,000-sq-ft student housing complex and dining hall project completed this year on its Ithaca, N.Y., campus. Not even a global pandemic, supply chain crisis, spiking inflation or local labor crunch knocked the team off track as it delivered the $272-million residential expansion ahead of schedule and under budget.

Barely a year after breaking ground on an effort to deliver housing for sophomores by 2021 and freshmen by 2022, the state’s COVID-19 lockdown halted work in April 2020. The team got the university’s blessing to stockpile materials during the downtime, says Ben Robertson, senior project manager for the construction manager Welliver, based in Montour Falls, N.Y.

“We ordered $4.8 million of materials during that month and got it cleared before supply chain issues [emerged],” he says. “From the pandemic on, there were very few supply chain issues that ended up hurting us, and almost none that impacted the schedule, and I don’t think many projects can say that.”

It was a collective effort, Robertson says, with the design team expediting reviews and subcontractors, and Cornell itself storing materials at yards and warehouses—or on campus. The team also coordinated closely with building and code officials across three local jurisdictions where the two North Campus jobsites sit to avoid delays on a project that at peak had $16 million a month in activity, he says.

“The amount of work that had to be put in place was really astonishing,” he says. “That front-end procurement, submittal review and shop drawing process was really instrumental.”

The team had focused on preplanning from the start—aiming to open on time for the academic year, address the regional labor shortage and deliver high-end quality finishes, says Arvind Tikku, principal of ikon.5 architects, the Princeton, N.J., project architect.

“The time savings had to be built in no matter what,” he says. 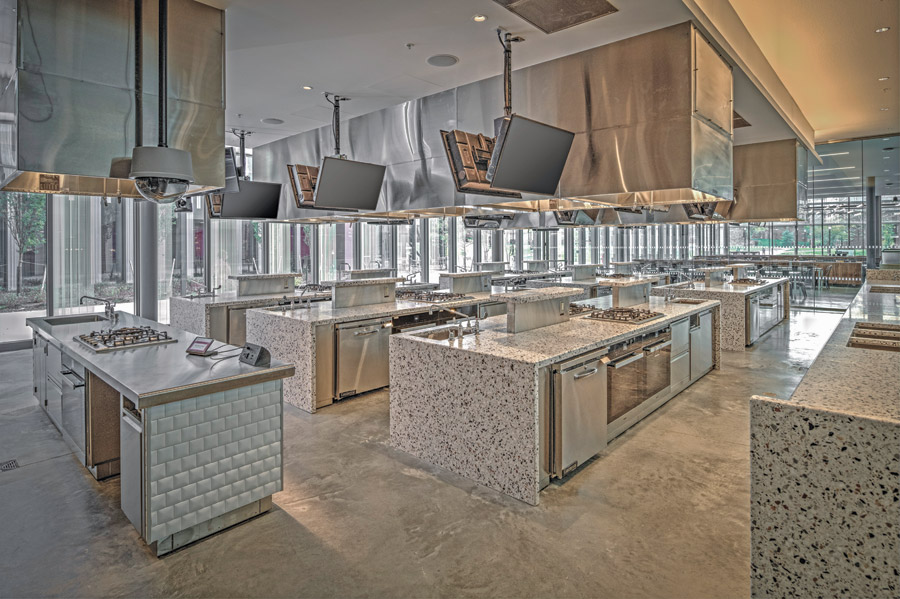 “We’re in an area where the workforce is limited in capacity, and we would not have had the opportunity to meet the schedule had we needed to rough in all the bathrooms,” he says. “We still had 100 plumbers on site, and I don’t think we would have been able to get 200 plumbers to maintain the schedule.”

Each unit was complete down to the floor slope and installation of lights, fixtures, drains and exhaust fans, Tikku says.

“The quality control was obviously at a higher level,” he adds. “It’s actually done in a controlled environment.” 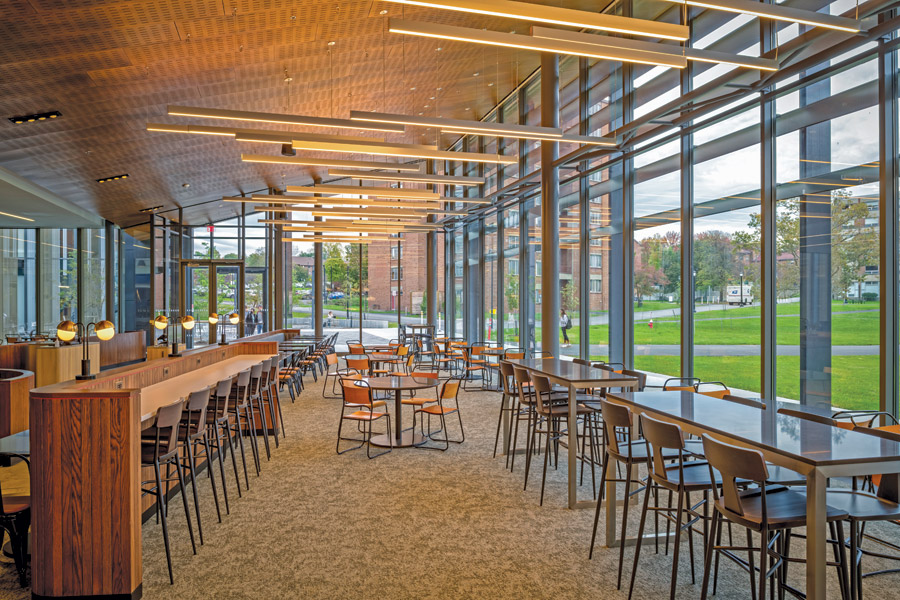 The dining hall has a sloped Prodema ceiling and seating with a view of the north campus quad.
Photos by Van Zandbergen Photography, courtesy of Welliver

While the North Campus expansion had a tight schedule, the university programmed ample planning lead time through 2018 and 2019, Robertson says. That helped the team creatively design across different zoning in the city of Ithaca, town of Ithaca and village of Cayuga Heights—including a structure that is three stories in one jurisdiction and five stories in another, he says.

Welliver and ikon5 coordinated closely with Cornell, structural engineer Thornton Tomasetti, MEP design engineer WSP and local and specialty contractors to map out project strategies, such as assigning dedicated supervisors and workers to each jobsite to keep focus on the staggered deadlines—especially after the sophomore buildings opened last year, Robertson says.

“This particular project, the magnitude is something we haven’t done in the past. It was a tough schedule, a large project and highly visible.”
—Anne Welliver-Hartsing, President, CM Welliver

“It took a lot of brainpower and mind-frame to say… ‘We’ve got a race we’re halfway done with that we’ve got to finish,’” he adds.

The project’s heart is the two sets of dorms, accommodating about 2,000 students. The upper floors feature structural steel frames with precast plank floors and a concrete topping—with terra-cotta wall panels on the exterior—while the lower floors have slab on grade with exposed concrete with aluminum and glass curtain wall systems, Robertson says.

The first phase opened with 800 sophomore beds in two buildings and a 1,000-seat dining hall, while the second site’s 1,200 first-year beds are in three student halls. There also are lounges, study areas and social spaces as well as a 5,000-sq-ft fitness center and café. Sustainable elements include a rooftop solar array and daylighting features contributing to the project’s LEED Gold target.

It was rewarding for Welliver, a local firm, says Anne Welliver-Hartsing, firm president. “We’ve done a lot of really cool construction projects through the years,” she says. “This particular project—the magnitude is something that we haven’t done in the past.… It was a tough schedule, it was a large project, it was highly visible.” 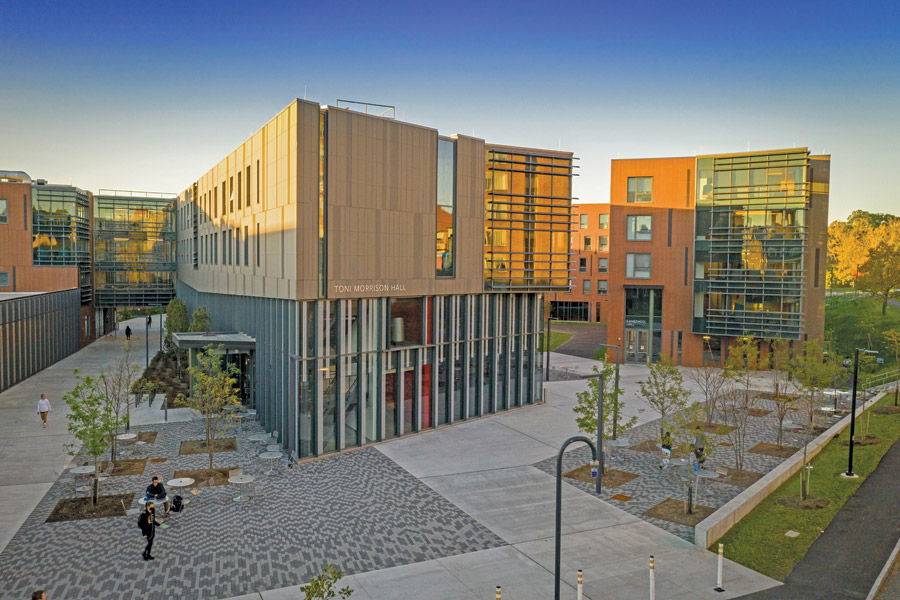 The exterior of the Morrison Dining Hall includes a finished terra-cotta two-story curtain wall and a three-story bridge.
Photos by Van Zandbergen Photography, courtesy of Welliver

“We went through a tremendous amount of design iterations,” he says. “These were double-wide walls, so we had to study where the ceiling joints were going to be, where the insulation was, how it handled the water drainage and how the embedment of the terra cotta [worked].”

“Every piece [of terra cotta] was completely identified and documented with every panel marked out on the elevations—all sizes, colors and textures.”
—Arvind Tikku, Principal, ikon.5 architects

The terra cotta alone entailed designing, fabricating and placing 69,371 pieces of the material, a process that involved coordination with the whole project team and began more than a year before site clearing to ensure delivery on time for facade erection, Tikku says. That is in part because the terra-cotta fabricator was in Germany, while other parts of the process, including final assembly, took place in the U.S.

“Every piece was completely identified and documented, with every terra-cotta panel marked out on the elevations—all the sizes, the color, the textures were identified,” he says.

Another benefit of a prefabrication strategy was avoiding extensive facade assembly work on lifts at the site, Robertson says. “That way you’re not scrambling come the summer when students are getting ready to move in,” he says. 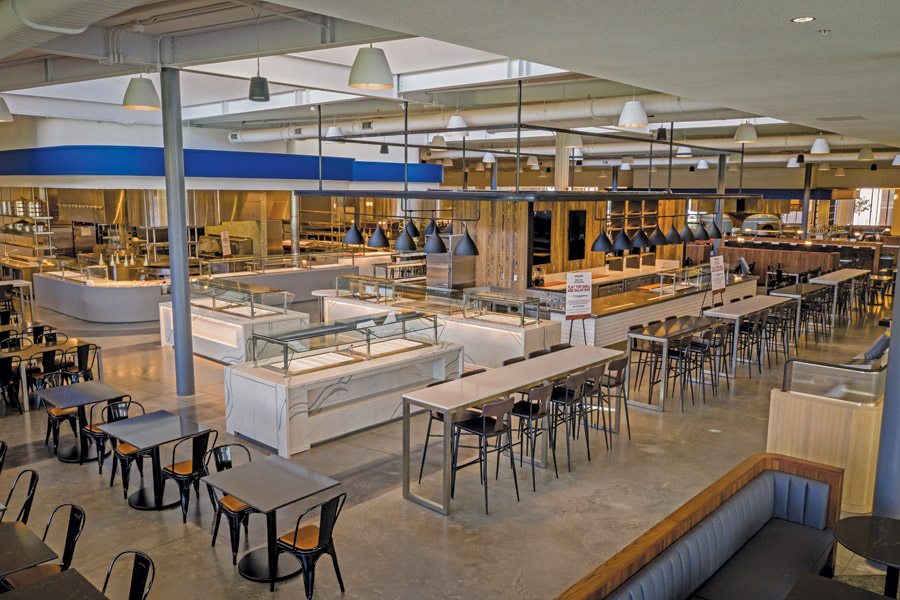 The 1,000-seat dining hall has a monolithic acoustic ceiling and plenty of options between the 11 food stations.
Photos by Van Zandbergen Photography, courtesy of Welliver

The 58,230-sq-ft dining hall alone is a signature element of the project, with a modern design featuring a mixture of Prodema, sloped monolithic acoustical and metal panel ceilings; intricate lighting layouts; state-of-the-art kitchen and culinary equipment; and 11 micro-stations for serving cuisine from different countries and cultures. The facility also includes a sleek all-glass 2,400-sq-ft discovery kitchen with 24 teaching stations.

That lengthy menu of features entailed a significant design and construction effort, including plumbing, electrical lines and refrigeration units that had to go under the slab-on-grade floor, Robertson says. The team used BIM modeling and engaged with well-known specialty contractors to execute the intricate design and high-end finishes.

“MEP coordination of the dining hall was a huge challenge. Just running soda conduits, getting all of the ductwork to all of these stations, making sure that it met the intent of the design team—there were months of effort put in,” he says. “And we still ran into duct conflicts with the structure, working with the design team to modify ceiling heights and change ductwork pathways to make sure we could get things where they needed to go.”

The team also pursued project themes that ensure the buildings fit into the historic Ivy League setting and that foster an environment where students are connected to each other and the larger campus.

While the buildings have a modern look, they also benefit from Cornell’s traditions, such as its residential quadrangles and courtyards, Tikku said.

“Our design was built on their precedents,” he says. “We hope we are extending the historic timeline further into the future.”

“The goal was to make the freshman class members come out of their rooms, to give them amenities where they can socialize—everything from community kitchens to lounges to bedrooms that open out to a little plaza,” he says. “Having more ways they can feel that they are part of the community was very important.”