The Tucson construction market is strong, but “we have seen some recent softening in the residential and commercial sectors in recent months; however, public works have remained stable,” Hill says.

He believes this downtick has been caused by a combination of increasing interest rates and fear of a potential recession coupled with historically high costs for construction. “Beginning in 2021, pent-up demand for construction goods and services caused supply shortages and amplified the need for skilled construction workers,” he says.

The high fuel prices and wages as well as inflation have continued to increase construction costs throughout 2021 and the first three quarters of 2022.

“Higher-than-anticipated costs also resulted in some public works contracts not being awarded during the first half of the year,” he says, noting that area construction companies have struggled to recoup these increased costs, especially for long-term contracts. “We are just now starting to see costs stabilize as higher interest rates and the fear of recession have started to slow demand closer to historical levels.”

Granite is completing a number of projects in the area. The largest, for the Tucson Airport Authority, is part of the multiyear $360-million Airfield Safety Enhancements Program, for which the company has won approximately $55 million in contracts. The CMAR program will demolish a runway and reconstruct a new relocated commercial runway, center taxiway and outboard taxiway that will parallel the main runway at the airport. Granite’s work is expected to be delivered by the second quarter of 2024.

For the city of Tucson, the $65-million Downtown Links Phase 3 is a joint venture between Granite and Borderland Construction. Work includes a 1.3-mile-long, four-lane roadway with bike lanes, sidewalks and a separate multiuse path connecting Barraza-Aviation Parkway to I-10. The joint venture team will be responsible for the construction of a new railroad underpass, 9th Avenue deck plaza and major drainage that will protect a large portion of downtown and surrounding neighborhoods. The entire project is now under contract, and work should be completed in the second quarter of 2024. 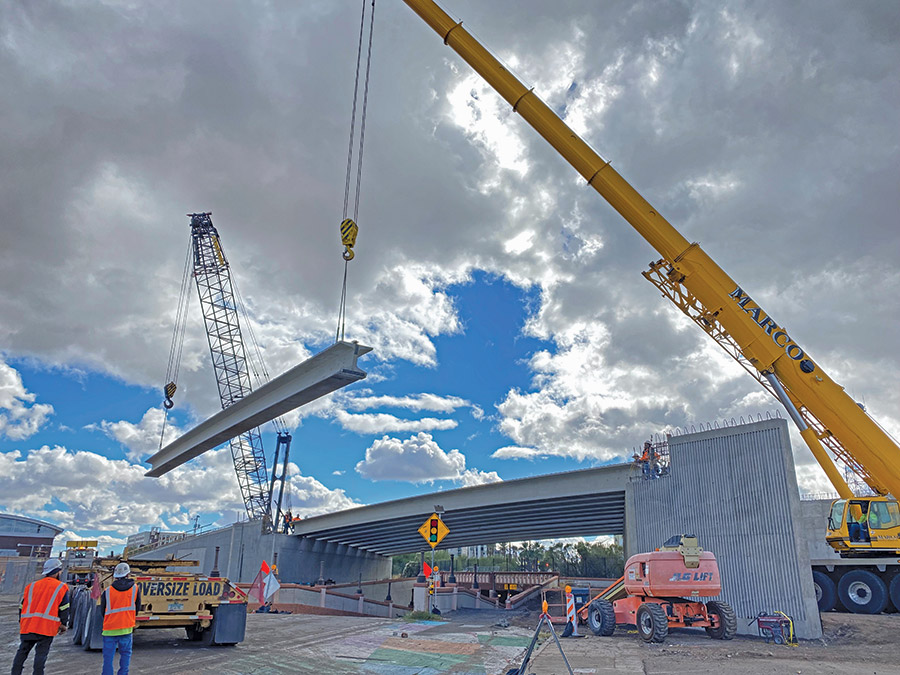 And for the Arizona Dept. of Transportation, the $34-million SR77 Junction I-10 project includes the stretch from Miracle Mile to Calle Concordia. The project will rehabilitate nine miles of six-lane state highway in Pima County. Completion is expected in March 2023.

In addition, Hill says that a number of major regional projects have been awarded or are being solicited by various area organizations and agencies. These are the $170-million I-10 reconstruction between Ruthrauff and Ina roads for ADOT; the city of Tucson, 22nd Street from Kino Parkway to Tucson Boulevard, $85 million, and $40 million for various road improvement projects; Pima County, road pavement repair and preservation projects, $66 million; and two projects for the town of Marana, the $25-million Tangerine Road Widening Phase 2A and the Twin Peaks Road and Rattlesnake Pass Widening, $18 million.

Hill expects the Tucson construction market to remain relatively stable through the next year. “Existing residential and commercial projects will continue construction at a slightly slower pace,” he says. “Public works will remain strong due to the influx of federal funds from the Infrastructure Investment and Jobs Act.”