Visitors enter through a 28-ft-high by 69-ft-wide by 77-ft-deep rectangular concrete structure that houses the artwork, which comprises four 85-ton metal cylinders. The building includes a 6-ft to 14-ft-wide perimeter wall footing that supports the 2-ft by 28-ft architectural walls on four sides of the building. A 1-ft-thick mat foundation around the perimeter stretches to 3 ft thick midway to support the artwork. Skylights built into the roof allow for natural lighting. 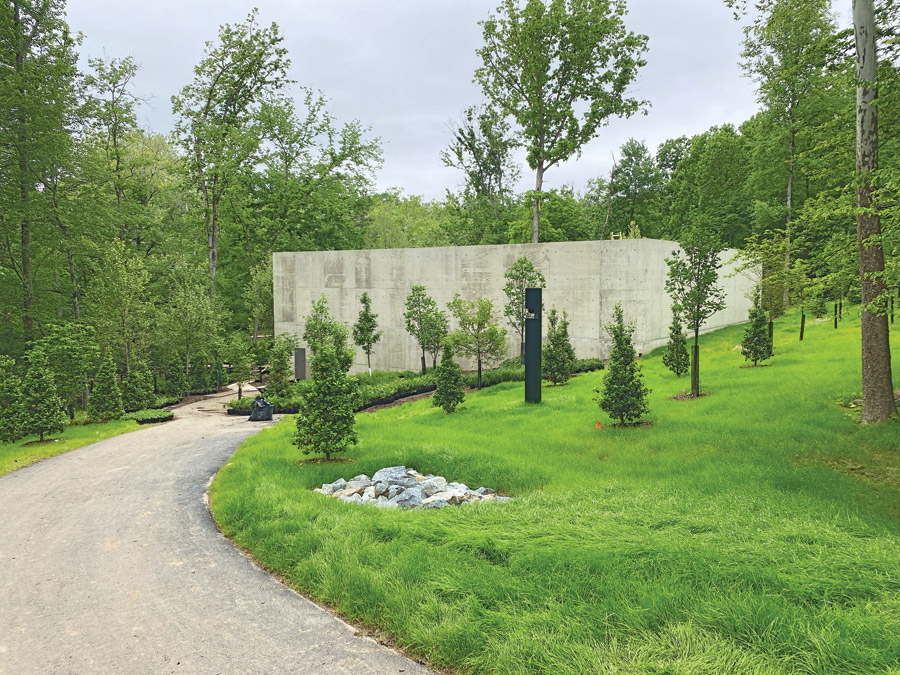 The structure’s walls required multiple rounds of coordination for the project team and its ready-mix supplier. To achieve the architect’s vision, Miller & Long Co.—the cast-in-place concrete firm on the project—chose a specific form panel and widely spaced wall-tie design, which required uniformity inside and out and did not allow for chamfer. This created challenges due to the geometry of the internal walls and an interstitial slab.

Due to the risk of shrinkage in working with roof beams of significant size and span, the team developed strategies to avoid problems. This included wall pockets for each beam and staggered placement of roof slabs. The team placed roof slabs in two rounds to reduce cracking; it placed the eight 6-ft by 2-ft beams first, followed 28 days later by securing the 10-ft slab beneath it. Crews also used Halfen anchors around the perimeter to accommodate shrinkage.

working in a small space, the team was able to install a dozen No. 8 structural steel top bars and 16 No. 8 bottom bars to frame over the existing installed artwork. To avoid overcrowding alongside the span and in the pockets and help with installation, Miller & Long used couplers and rebar terminators. The team also maximized the bar sizing to reduce the overall quantity of the bars. 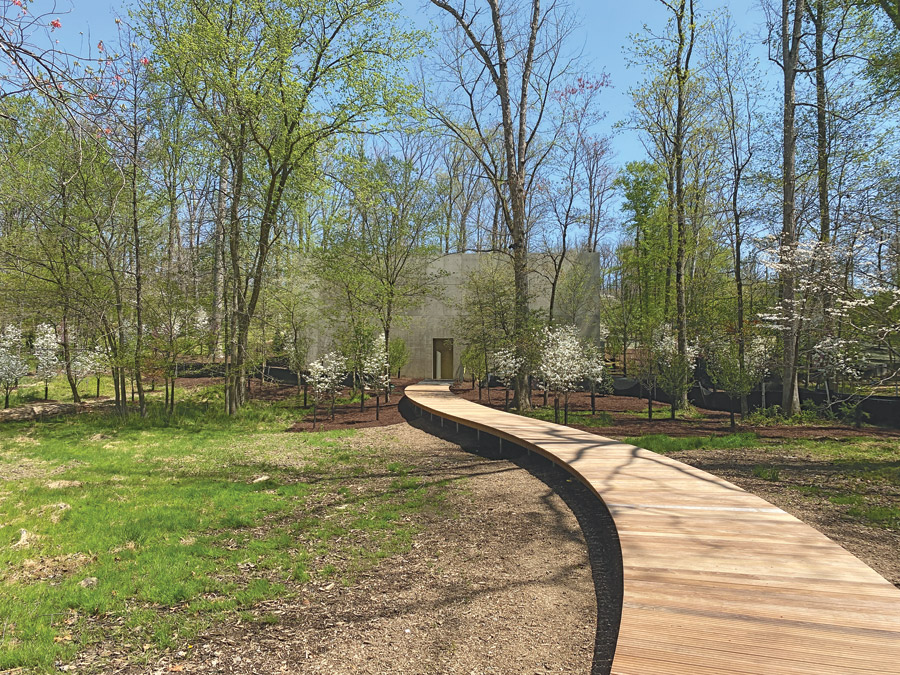 In keeping with the architect’s vision, the team used double-faced medium-density overlay plywood, which hid fasteners, and a high amount of portland cement rather than regionally available brown sand for a deep-gray finish on all exposed concrete. Patching was not possible on the exposed concrete, so crews were expected to be spot on the first time.

When the project’s location off a country road prevented conventional trucking, the team employed mobile cranes and had crews divide loads off site to accommodate deliveries. The team used specialized tractors and hoisting to install the heavy artwork.

Communication between team members and concrete and boardwalk mock-ups helped achieve the “highest standards of quality,” according to the team. The project’s cast-in-place concrete “is fundamental to the project’s design, expression and construction,” the team says. “Much like the sculptures that the building is designed to house, the concrete work for the project is intended to convey directness, integrity and an honest expression of materiality.”