Set on 10 acres of Allegheny Health Network’s Wexford, Pa., campus, the new 360,000-sq-ft AHN hospital aims to offer elevated levels of healing and comfort to patients and visitors. The facility features rooftop gardens, valet parking and patient rooms designed to minimize the stress associated with hospital stays. For construction manager at-risk Gilbane Building Co. and its JV partner Massaro Corp., delivering this vision required early engagement with its partners and the design team to complete the project on time and on budget in August 2021.

With a total project cost of $313 million, the hospital represents the single-largest new facility investment in AHN’s history. The hospital, which broke ground in October 2018, features 160 inpatient beds, an emergency department, eight operating rooms, sterile processing and an imaging and diagnostics department. 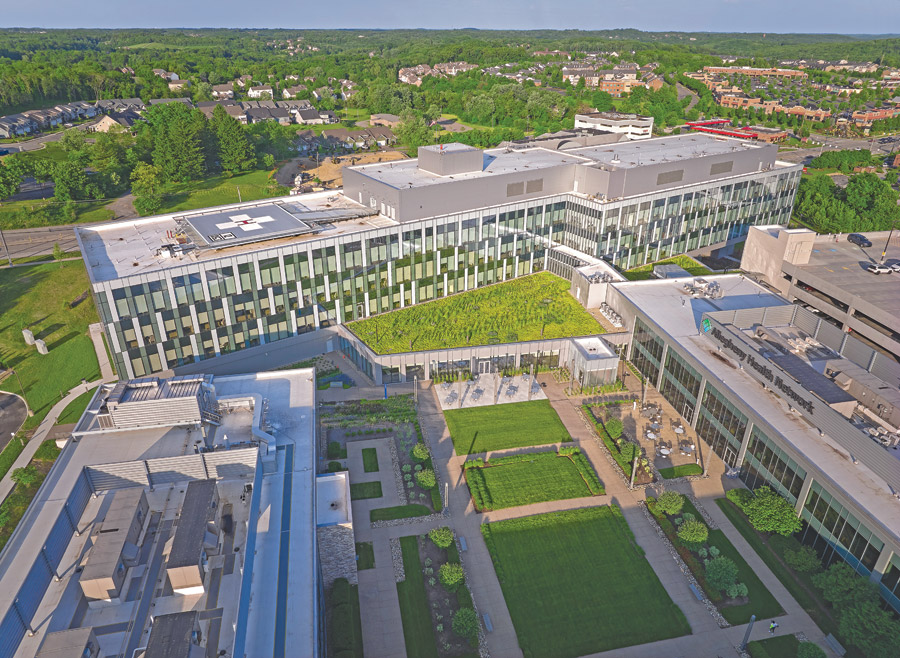 One of the team’s early strategies was to sequence construction of the adjacent 515-car, five-level garage a year early, which allowed subcontractors to use it for parking. Due to a lack of nearby spaces, subcontractors included costs related to offsite parking and shuttling workers to the jobsite within their budget. Gilbane estimates the strategy saved approximately $1 million in costs.

All combined, the team realized more than $4 million in savings, largely due to value engineering through redesign of interiors and use of alternative materials. By returning $1 million to the owner through contingency and allowances, the owner was able to add additional scope into the project.

Crews had to excavate into a steep grade, which positioned one facade of the facility’s lowest level at grade and the others below grade. Excavation reached 30 ft below grade at its deepest point. Geotech studies revealed that the site included unsuitable soils with pyrite. As a result, crews placed a layer of engineered fill throughout the jobsite to cover the unsuitable soil before the material could expand upon hitting the air. “We capped the whole 200,000-sq-ft footprint with 2 feet of clay,” says Mike Tokar, general superintendent for Gilbane. “Sourcing that much clay was a real challenge.” 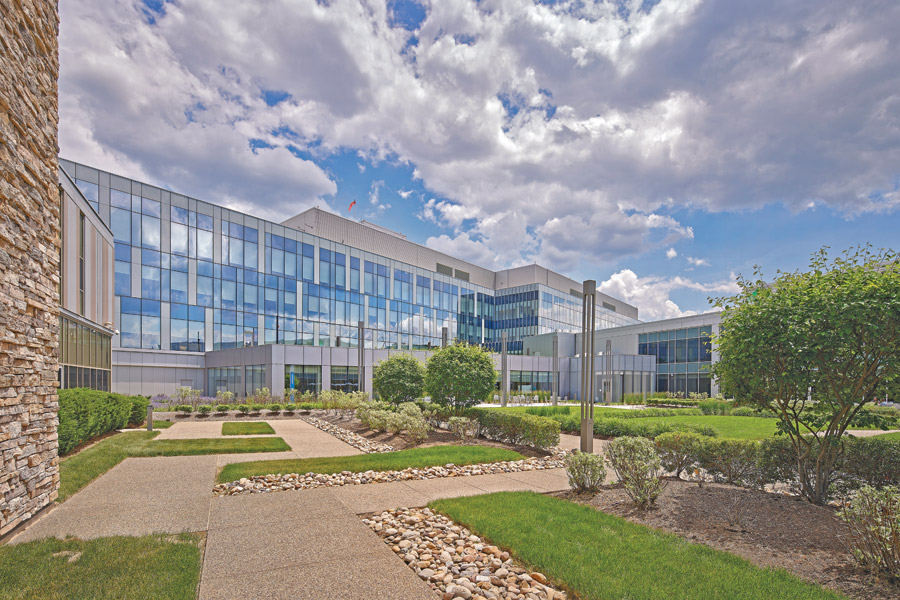 By capping the pyrite, Tokar says the team was able continue work through the winter months with little impact on productivity. The design called for spread foundations on caissons. Using design-assist, the team was able to backfill the walls early, building a battered wall foundation system that tapered up from a thickness of 6 ft at the bottom.

Roughly one-third of the steel structure building is cantilevered. The steel in that portion of the building was expected to deflect upward by 2 in. once fully loaded. The team was concerned that the curtain wall embeds didn’t have a close level of tolerance. The curtain wall embeds were to be installed on the steel pour stops of the structure prior to any designed deflection and any concrete being poured in place.

Building information modeling was used to coordinate locations, while multiple site surveys helped ensure the correct location of the embeds prior to concrete pours. Many were installed along the steel pour stops at the steel supplier’s shop prior to the steel being placed on site. With nearly 250 curtain wall embeds at the cantilever portion, the team efforts resulted in zero rework to the cantilever curtain wall embeds.

“When we took out the perimeter supports, it came down to the elevation designed,” Tokar says. “We hit it right on.”

The steel superstructure was designed for speed and flexibility. The side-plate moment frame system provides lateral support without frames or shear walls, providing a flexible structure where the interior could be reconfigured over the life of the building. The steel subcontractor and Gilbane coordinated the final structure well ahead of standard schedule. The team was able to bid, detail the structure and start installation before the design was completed. As a result, the steel was installed ahead of schedule with minimal changes. 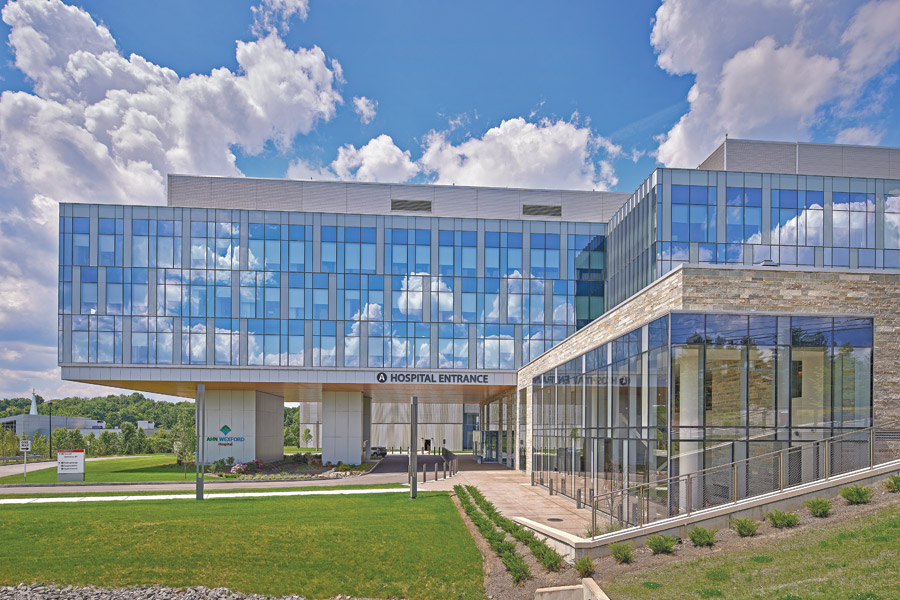 The team also prefabricated MEP corridor racks, which included all mechanical ductwork, plumbing and electrical components required to feed the various patient rooms on the third and fourth floors of the hospital tower. The prefabrication goal on Levels 3 and 4 would come to a total of 24 days per floor to install racks—12 days for the north half and 12 days for the south half. Had the project continued in a traditional route instead of prefabrication, an entire floor corridor would have required a total of 40 days.

Due to budget constraints, the entire fifth floor and other areas were initially designed as shell space. However, the fit-out of these spaces was added back into the scope by the owner. Since this wasn’t built into the project scope initially and the buck hoist was demobilized, the team removed an already installed curtain wall for roughly one month so the key and critical materials could be received and installed prior to the re-enclosure of the exterior skin. 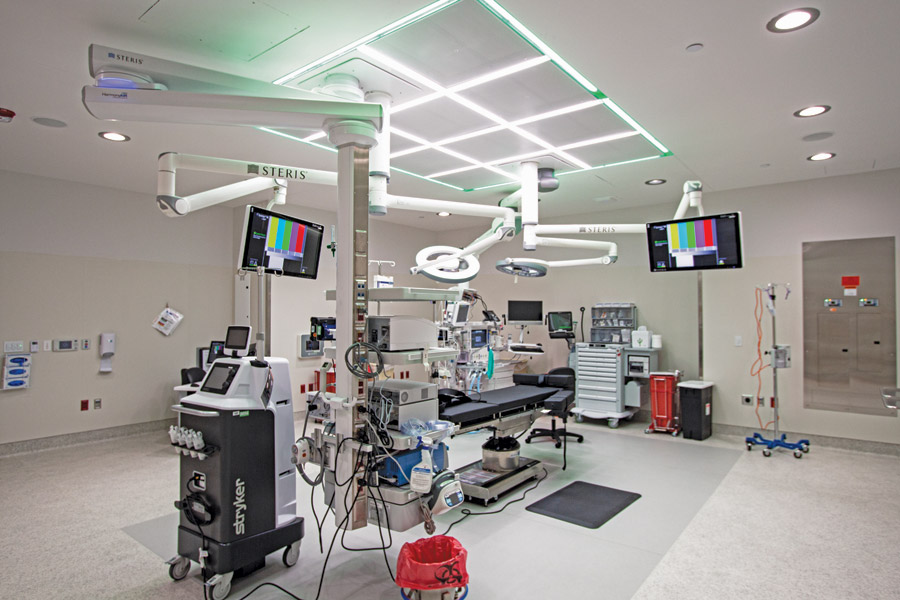 The completed project was designed to address modern standards for patients, staff and visitors while also coordinating closely with the existing facility both functionally and aesthetically. In response to the site’s steep grading, the diagnostic and treatment facilities were located at the lower levels, which allowed the patient rooms, public areas and other daylight sensitive programs to be raised up and take advantage of light and views. Green roofs were strategically located next to patient zones, such as maternity, to provide visual access to nature.

The new hospital references the existing facilities with similar materials in an updated arrangement. Stone at the lower floors grounds the building to the site, while the glass and metal of the upper floors allow maximum light with a modern feel.

Some judges were struck by the projects winning design. “The beauty of the Allegheny project … the green roofs, the way it blends into the area, the entire 10-acre site development along with the building itself—it just really goes over and above,” says one judge.

“The design approach was so effortless, creating something that brings positive emotion and blends with nature and the sky and looks so effortless,” says another judge. “Look at something that you haven’t seen before and you’re thinking ‘Wow, this team really put all their best efforts forward.’”