This website requires certain cookies to work and uses other cookies to help you have the best experience. By visiting this website, certain cookies have already been set, which you may delete and block. By closing this message or continuing to use our site, you agree to the use of cookies. Visit our updated privacy and cookie policy to learn more.
Home » Best Health Care and Project of the Year Finalist: Brigham & Women's Hospital, Emergency Department Expansion Phase 1
ProjectsNew EnglandNew England Construction ProjectsBest Projects2021
Best Projects

The $46-million emergency department expansion and renovation would have been challenging under the best of circumstances. By spring 2020, the team was well along on the project as Boston’s busiest emergency department went about its business treating some 60,000 patients a year. Then COVID-19 hit.

After Boston’s nonessential construction shutdown, the team and the hospital gained permission to continue work on the project, which involved building a 25,000-sq-ft addition followed by renovation of the existing emergency department. Adding to the challenges, the department expansion was atop the hospital’s radiology department, with CT scan and MRI machines doing tests on a 24/7 schedule.

“We were at the midpoint of the project when the pandemic hit,” said Bryan Northrop, head of Skanska’s building operations in Boston. “Like everybody else there was an initial pause.”

The hospital and contractor huddled with major team subcontractors and construction trade unions to develop a plan to present to the city. The contractor and hospital infectious disease specialists set up a series of protocols designed to keep workers and staff safe amid the pandemic. These included a full-time screener, temperature monitoring and the wearing of masks supplied by the hospital, all new concepts at the start of the pandemic. 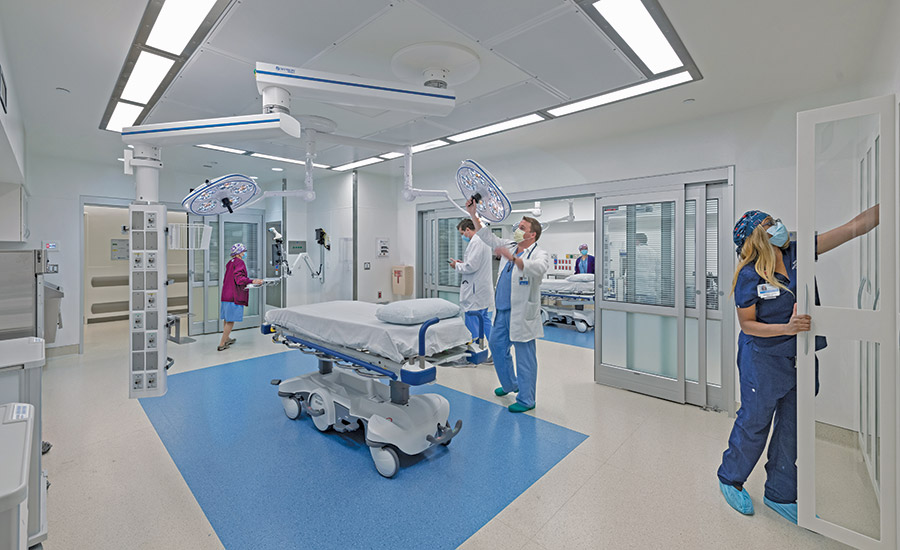 The hospital also ensured that workers on the project received the same access as hospital staff to COVID-19 vaccines, a significant step at a time when distribution was just starting to ramp up and doses were extremely limited. One judge liked the hospital’s decision to bring in its medical experts to work with the construction team. The judge also noted that the project lost zero recordable time. “There was a good safety record,” said the judge. “They worked with the city of Boston on safety plans, which is neat.”

After gutting the emergency department’s existing space—doctors and nurses had transitioned to the new, 25,000-sq-ft space last December—the team found the existing slab was as much as 3 in. higher than expected in some places. Left as is, that disparity would have interfered with the closing of sliding glass doors planned for the patient rooms.

The contractor brought in a structural consultant, which surveyed the floor and broke it down into grids. One solution would have been to pour concrete to help even out the floor, but the team was concerned about adding additional weight. Ultimately, it deployed a lighter-weight, self-leveling product called Supercap, which can be installed in higher and lower spots. 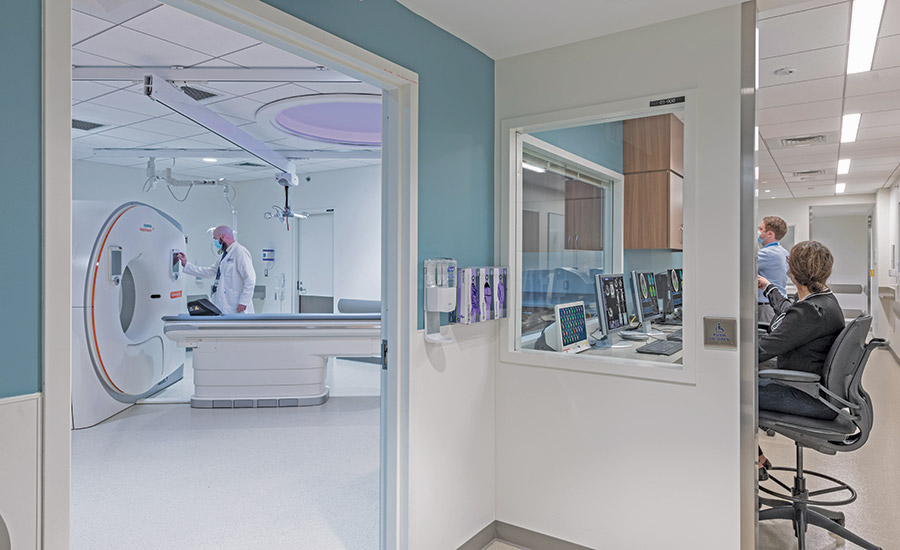 With space at a premium inside the building, the decision was made to place two electric infrastructure boxes on the roof, with all associated gear and equipment. That required a need for cranes to be lowered in prebuilt sections of the various systems onto the roof, impacting traffic in a busy section of Boston near a residential area. “To get these two structures … on the roof, with all the associated gear and wiring, was a lot of work,” said Jon Wine, project executive at electrical subcontractor Sullivan and McLaughlin Cos.

To speed up the process, the team had sections of the electrical systems prefabricated off site. In addition, it found a piece of property near the hospital entryway on which to place the crane, avoiding placement on the street.

“That eliminated the need for road closures,” Skanska’s Northrop said.