The project team worked with the city and multiple agencies to coordinate design-build implementation of granular activated carbon (GAC) treatment technology for five groundwater supply wells at four separate sites. The project will ensure long-term compliance with state drinking water standards limiting levels of Trichloropropane (TCP), a groundwater pollutant that has been linked to cancer.

Due to the wells’ differing locations and connections to the city’s water system a decentralized system was employed. The three GAC systems were added adjacent to their respective wellheads, all of which were in close proximity to residences. GAC treatment serving two additional wells was located at a central arsenic treatment facility (CATF) in a mixed commercial residential area. 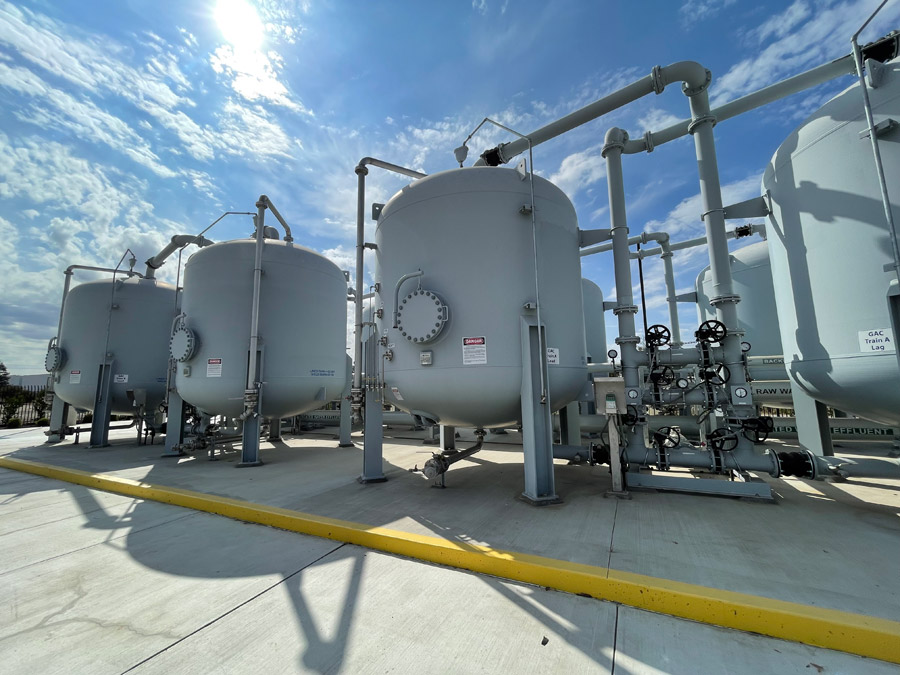 To mitigate impacts to nearby residential areas, the project team worked to mitigate potential visual impacts, noise and other disruptions during construction. This included excavation, soil fill and concrete, material deliveries and other activities. This approach was also used for subsequent periodic replacement of GAC media in the on-site storage vessels. The project team also worked closely with the city to perform outreach to stakeholders about the project and its impacts.

The Design-build delivery method helped accelerate the work schedule since the team was able to mobilize construction activities while other design and procurement activities were underway. Designing and building the CATF system on a separate, earlier timeline also enabled the team to tackle one of the easier sites first, providing a valuable opportunity to hone workflows, and apply lessons learned to the other three sites. Early engagement with vendors of key process equipment established the basis of the GAC design and helped expedite development of additional details.

Despite the project’s many complexities, all GAC systems were completed and operational three months ahead of schedule and under budget.

Project schedules were developed to provide significant overlap in work activities between sites to prevent any disruptions to the water system’s day-to-day operation. Each well’s GAC equipment was staged so that crews completed earthwork, underground piping, site preparation and civil concrete at one site prior to breaking ground at the next. Underground piping was also installed concurrent with other scheduled activities, with final tie-ins to existing facilities taking place just before start-up and commissioning.

To mitigate potential traffic issues in the residential areas during construction, the project team worked with the City to coordinate truck access routes until the new systems were in place and operational.

Other tasks included decommissioning of chlorine injection systems at each of the well sites, and incorporating a new injection system at the CATF, which was also augmented with extended fencing and landscaping