Unearthing a Historic and Cultural Legacy

Before a single plan was drawn or brick laid, the Herald Examiner Building in downtown Los Angeles, which had been commissioned in 1913 by newspaper magnate William Randolph Hearst, already seemed headed toward historic status.

The building’s designer was Julia Morgan, the first licensed female architect in California who would go on to design another landmark, Hearst Castle. After the building’s namesake newspaper shuttered in 1989, it appeared for a time that the building would follow, making way for a parking lot.

While designated a local landmark in 1977, it was a public outcry over the demolition plans that kept the building standing. As the team hired to renovate and repurpose the building for main anchor tenant Arizona State University’s satellite campus would discover, the Herald Examiner Building was standing on tenuous ground. 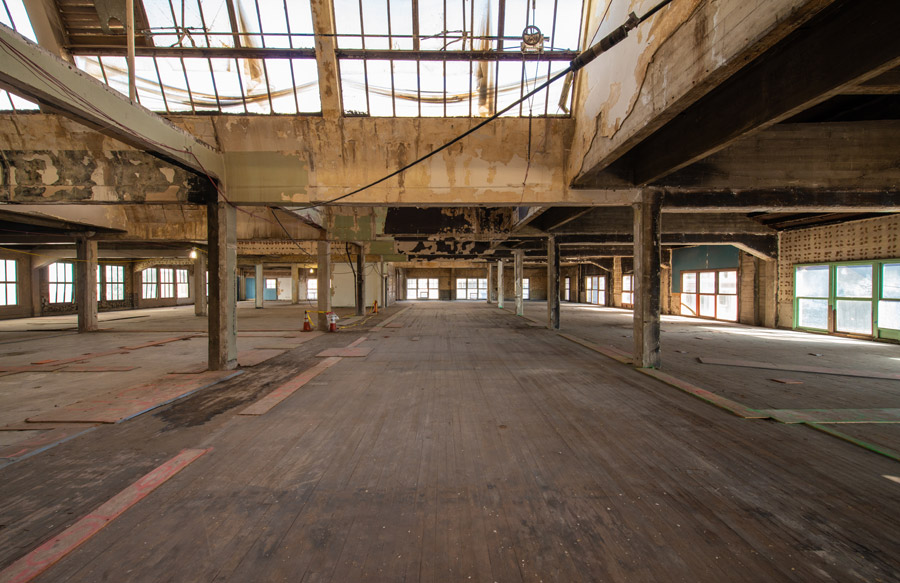 
Although preserving the building’s history was a critical challenge, that also added to its complexities, as the historic structure faced major structural issues. The upper level of the building, where white collar management had presided, looked down onto the blue collar main floor, where heavy printing press equipment was installed after the building had been completed—but the foundation was not built to support such weight.

The solution at the time involved retroactively adding about 24 pile columns and footings to the basement, says Rick Stupin, who was senior project manager on site for general contractor MATT Construction. The team would discover, when they began excavations, that those piles “were not even connected,” says Stupin. “They started literally falling over because they weren’t even tied to the structure above, and they were just on a very thin pad footing underneath.”

The legacy of the printing press would show up again during lead and asbestos testing. Years of escaped ink from the presses that contained lead—which had seeped into the slab and the dirt and commingled with construction debris—required mitigation. 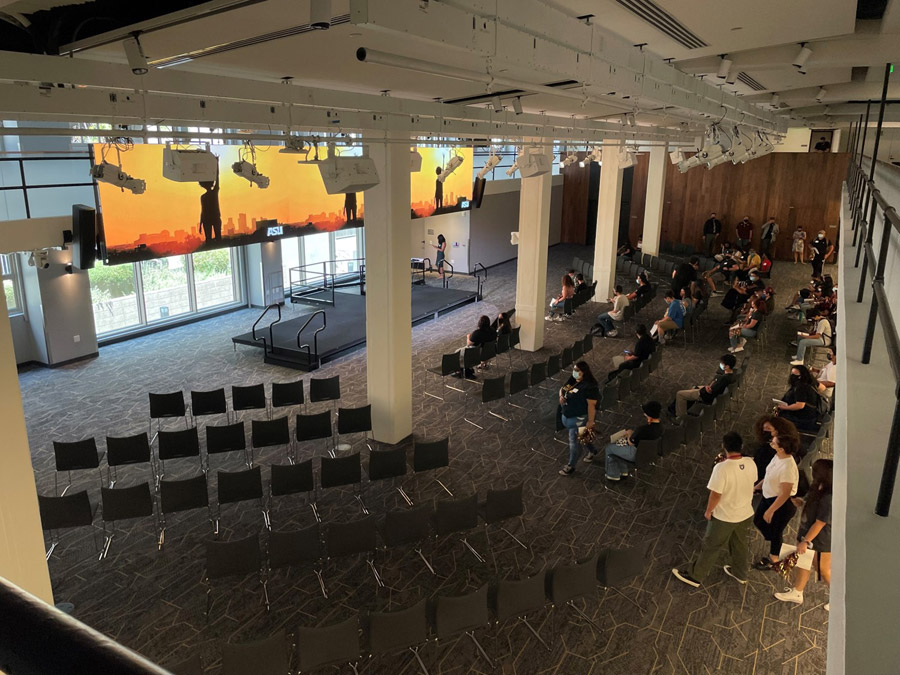 The completed  ASU flex and event space, as seen from the mezzanine level.
Photo courtesy of MATT Construction


To get a clearer picture of the building, the team completed a 3D scan of the structure, which Gensler used as the basis for creating new drawings. But with incomplete as-builts from a succession of remodels and interior modifications, some as early as 1930, there were still surprise discoveries. “It wasn’t always evident what era of construction we were modifying, nor what was within the concrete that we were trying to adjust,” say Ryan Wilkerson, engineer of record, and Shinhee Chang, project engineer, both with Nabih Youssef Associates Structural Engineers.

In a lot of instances, work would pause and the structural engineer and architect would be brought in to come up with a timely solution, says Stupin. One of those sessions occurred after the discovery of a 14-ft by 14-ft by 12-ft-deep sinkhole while excavating for the foundation. After determining there wasn’t anything that needed to be salvaged there, the hole was filled with slurry.

Making changes to the historical design meant the team had to apply for approval, as it did for alterations for the skylights along the roof that required raising the bottom up to improve watertightness, says Som Iempinyo, senior associate at Gensler, the project’s design lead.

Piping and ductwork were kept away in order to make the skylights fully visible, and they were sealed for energy efficiency. An open floor plan was designed for the space housing the skylights so that the full effect of the light could be experienced. 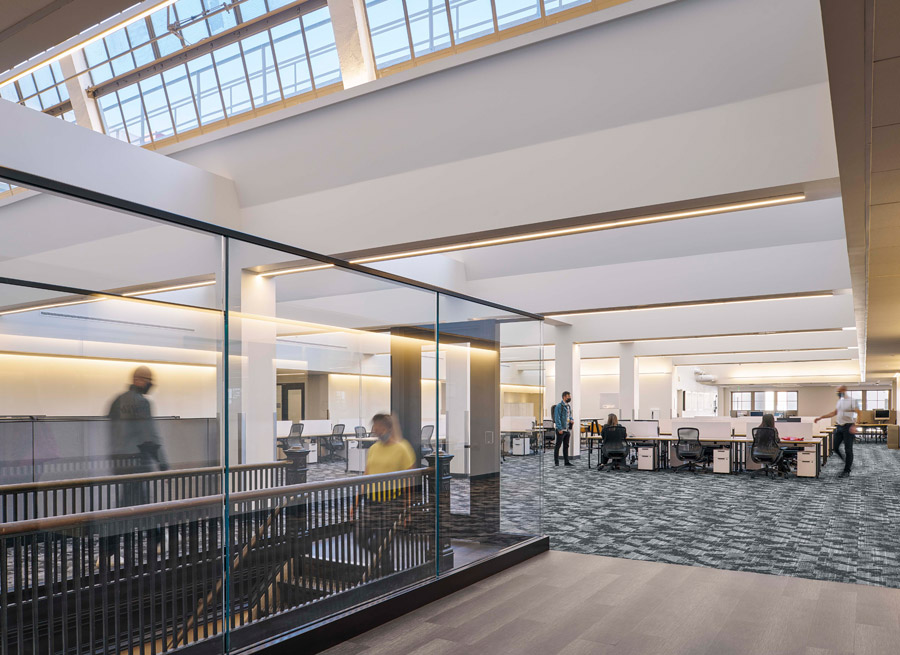 Level 3 contains a work area for ASU students that features a historic skylight and staircase.
Photo by Ryan Gobuty

With its listing in the California Register of Historical Resources, the building was eligible for the California Historic Rehabilitation Tax Credit, which owner Georgetown pursued. That, along with requirements under the state Office of Historic Preservation, would dictate the scope of restoration for the building’s exterior and intricate lobby.

“When we first started the restoration, we had to try to figure out what exactly restoration meant in the eyes of the client,” says Stephen Montoya, vice president at MATT Construction.

As an example of the consideration that would be required, Montoya refers to the large, ground-level arched windows running across the structure’s perimeter. “Was the client expecting us to pull the windows out 100%, [plus] the frames, and send them to a shop to have them be restored, have the glass replaced [and] re-caulked?”

The windows ended up being restored in place, an effort that required the work of consultants and subcontractors on everything from removing the boards that had covered the windows for decades, specifying the glass to be used and the material for the frame all the way down to getting the paint color correct in line with the building’s history.

To ensure the details were right and the various preservation guidelines followed, the project team hired a historic conservator, Silverlake Conservation, for the lobby work. The restorer helped contextualize the lobby’s elements, including what needed to be preserved rather than repaired. An example can be seen in the handrails leading upstairs, with the patina on the copper tops left unchanged. The marks were made by the bats of Newspaper Guild employees during a decade-long strike that began in 1967.

“You could see all the dents in it, all the way up to the landing just before [William Randolph Hearst’s] floor, where we’re told by his great-grandson Stephen Hearst, who walked us through, that they had his Pinkerton armed guards there at the top of the stairway” keeping the strikers away, Stupin says.

When many elements of the lobby could not be restored, the team turned to historical reconstruction. When trying to take down nine ceiling chandeliers with at least seven decades of wear and tear for repair, crews discovered “they just fell apart,” says Stupin. Specialty subcontractor Architectural Lighting determined they could not be restored.

Instead, the subcontractor recast every piece in aluminum using more than 100 molds, capturing all the carvings and other details, then reassembled the pieces into the fixtures’ original form.

While architect Julia Morgan had been known for introducing seismic design to her structures at a time when that was uncommon, the perimeter concrete shear walls that had been put in place were not sufficient for the codes of this century, requiring an upgrade to comply with a Non-Ductile Concrete Mandatory Retrofit Ordinance for the building.

“The retrofit strategy was to design a new seismic resisting system with modern ductility detailing to be compatible with the extremely stiff, but non-ductile characteristics of the existing lightly reinforced concrete walls,” say Wilkerson and Chang. The existing system would remain, bolstered by a new reinforced concrete shear wall system added to stairs and elevator cores.

Wall piers with the potential to lose floor support were backed up with gravity support columns that could support the floor if a major earthquake rendered portions of the wall unable to do so. The columns were added from the interior side to preserve the look of the exterior.

As the team sought to improve the building’s seismic strength, a 7.1-magnitude earthquake struck in July 2019 while the building was “excavated and exposed,” Stupin recalls. “We had to stabilize this entire building, dig deep underneath, down to the bottom of the existing footings and compact soil, put new foundational upgrades in, grade beams and then shoot shear walls all the way up through the top of the building.”

During this time, Steve Matt, chairman and CEO of MATT Construction, did a walkthrough to ensure safety and make sure the engineering had been properly calculated. The earthquake hit after the team had checked and confirmed its work, and Stupin says the project emerged “unscathed.”

The legacy components of the building had to merge with its more utilitarian components as a contemporary campus space for students who are part of the ASU Local initiative, which seeks to draw in underserved students—largely first-generation college students and people of color, in particular. With that in mind, the ASU lobby adjacent to the historic lobby was designed not to mimic the extravagance of the historic one  but instead “marry the old and the new together,” says Iempinyo. ASU’s lobby features “simple, clean lines that would complement the historic part of the building.”

But it’s not just the students soaking in the legacy. “To have that role model [in Julia Morgan] for us was a pretty big deal, and for her work to finally get more recognition—it’s just very fulfilling,” Iempinyo says, estimating that about 90% of the Gensler team working on the project were women.

Back to ENR California Best Projects 2022