RiNo High-Rise Is Two Buildings in One

Over the past several years, Denver’s River North (RiNo) district has undergone a remarkable transformation, from blocks of factories and warehouses to a vibrantly eclectic neighborhood of artists, restaurants and co-working and collaboration spaces.

The next stage in the neighborhood’s evolution is now taking shape, led by projects such as the 646,417-sq-ft NOVEL RiNo mixed-use development. More than a year into its approximately two-year construction phase, NOVEL RiNo itself represents a transition. The two-building complex integrates multiple types of construction—a five-story wood-frame structure with 212 units next door to a five-level cast-in-place garage/podium topped by a seven-level, 271-unit section structured using the Infinity steel framing system, combining composite floors with prepanelized load-bearing metal stud walls. The project also includes 15,800 sq ft of retail.

“It really is two projects in one,” says Matt Joens, a construction executive for general contractor Milender White. It’s not just size and design that differentiates the two buildings. Owner Crescent Communities’ ambitious schedule calls for the low-rise structure to be delivered four to five months ahead of its taller counterpart, in late 2022. With few overlapping systems, NOVEL RiNo has separate permits, addresses and management strategies.

Joens says that makes NOVEL RiNo “one of those anomaly projects that we get to do every once in a while—the ones that have just a few more moving parts than we’re normally used to.”

Philip Fossen, associate principal for Davis Partnership Architects, which designed the project, explains that in addition to providing a critical mass of residents to support nearby businesses, the step-down configuration for NOVEL RiNo also facilitates a transition across the district’s zoning plan. It ties the corridor surrounding an existing light rail station designated for high-rise construction to the lower-rise profile of adjacent residential and commercial buildings as well as the terminus of a popular greenway park.

The project “is a big piece of connective tissue,” Fossen says, adding that another design goal was to “create a new history of sorts, and give the project the look of having been developed over time.”

Bryan Clifford, Crescent Communities’ director of construction, says the approach of using multiple structural methods evolved in step with the design, with wood framing offering the best path toward expediting delivery of the low-rise structure. Though the strategy presents a unique challenge to build, “it’s fun to have different construction approaches converge,” he says. 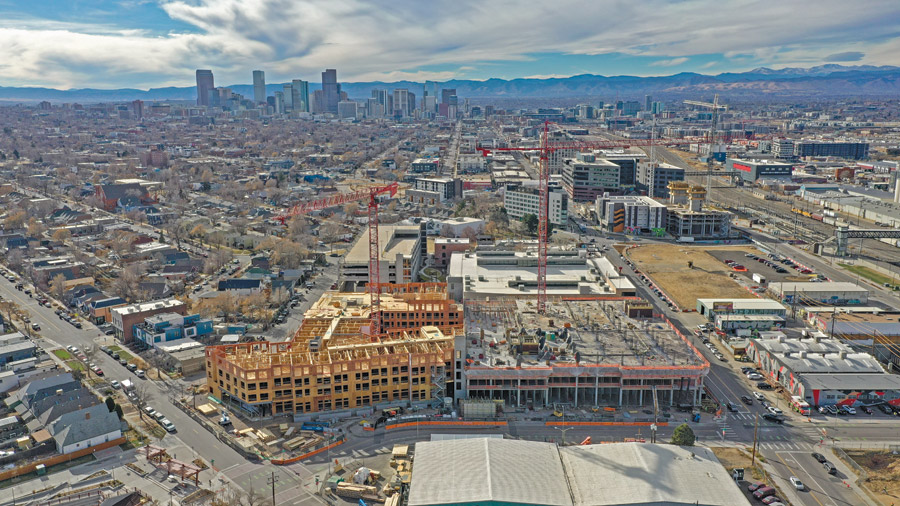 Choosing wood framing for NOVEL RiNo’s five-story structure accelerates the delivery of more than 200 apartments to the district. The adjacent five-story cast-in-place garage/podium (below) will support a seven-level structure with more than 270 apartments.
Photos courtesy of Milender White and Ironview360 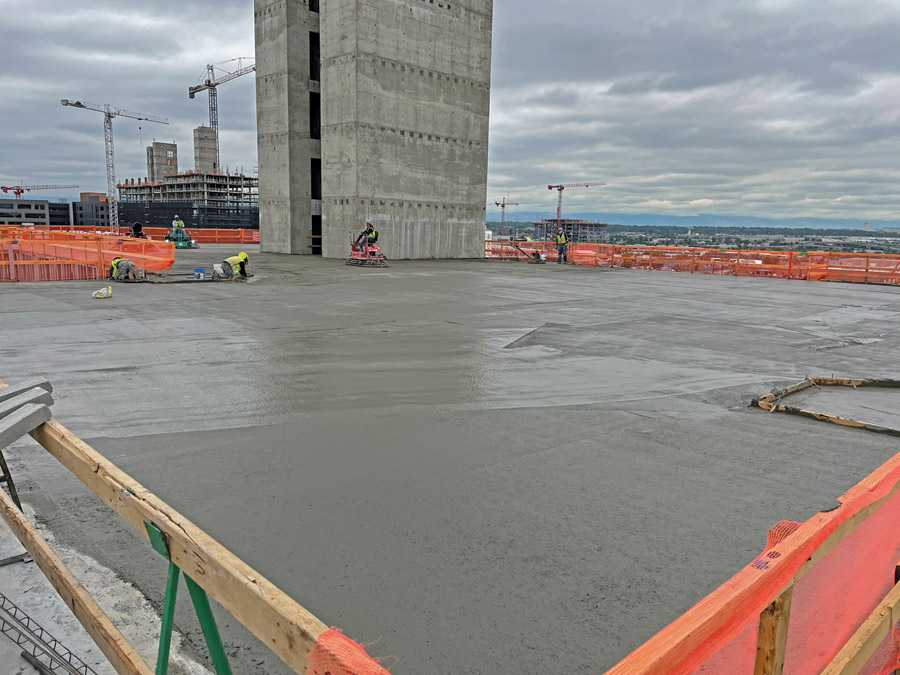 Although the RiNo district was relatively untouched by major development when construction began in summer 2021, it did not take long for Milender White’s team to have company. Several other major projects have begun nearby over the past year, compounding the challenge of working within a jobsite hemmed in by adjacent buildings and active neighborhood streets.

“We have four to five general contractors within sight of each other,” says Joens. “We’ve all worked closely with the city to coordinate deliveries, lane closures and other activities that might create disruptions and conflicts.”

“It’s essential that we maintain a relationship with everyone around us,” agrees Milender White project manager Bret Bemiller. “We’re building right up to the property line, and the alley we use for deliveries is owned by an adjacent shared workspace facility. So for everything we do, we need to make sure residents, businesses, motorists, cyclists and pedestrians coming through the area feel safe having us as a neighbor.”

“[NOVEL RiNo is] one of those anomaly projects that we get to do every once in a while—the ones that have just a few more moving parts than we’re normally used to.”
—Matt Joens, Milender White

The first step toward making NOVEL RiNo a reality was demolishing half-century-old warehouses occupying the site, with as much material as possible diverted to recycling. The team excavated approximately 12,500 cu yd of sandy soil, which was stored off site and reused to backfill around the aggregate piers, spread footings and underground utilities.

Vertical construction for both buildings has been relatively free of challenges, Joens and Bemiller say. The low-rise building’s timber components include 47,800 ft of walls and 358,000 sq ft of floors, all of which were custom made at Milender White’s Hudson, Colo., prefabrication shop.

Nearly 24,000 cu yd of concrete have been poured for the garage/podium, with an 18-in.-thick slab at the point of transition to the taller Infinity-structure levels, where floor decks are 5.5 in. thick. The exteriors will feature a variety of siding materials, including storefront, brick, fiber cement and aluminum composite panels and direct-applied finishes.

Bemiller says that the project has benefited from Denver’s relatively dry weather over the past year, helping accelerate each floor’s dry-in process. 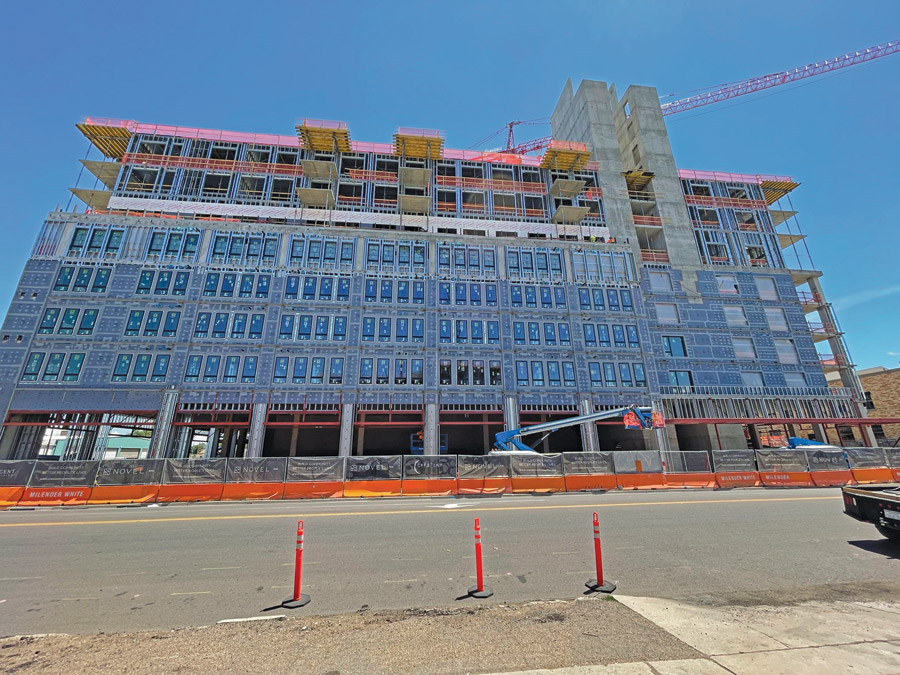 A variety of finishes will complement existing and planned buildings around NOVEL RiNo.
Photo Courtesy of Milender White and Ironview360

“That’s helped us move up the building with the trades fairly quickly,” he says, adding while project management tools have helped coordinate the work of approximately 70 subcontractors, basic communication and engagement across the project team remains the critical ingredient to success.

“You get only as much out of project management tools as you put in them,” he says. “Communication and relationships are essential to this project, and it goes back to involving our trade partners at a high level to eliminate risks and make sure we have the right scope at the right price to give to the owner. When you have that in place, you can sign the contract, then push the button to go.”

Indeed, the only notable challenge to NOVEL RiNo’s progress has been material supply-chain issues that have been an industry-wide problem since before the coronavirus pandemic. Problematic procurements have run the gamut from roofing materials and metals to cabinets, countertops and door hardware.

“Sometimes we’ve had to adjust certain aspects on the fly, but overall our flow and schedule haven’t been affected,” Joens says. “When something isn’t available, the owner and our partners have always stepped up to find reasonable alternatives. The answer is not always what we want to see, but it’s what they’re going to do to accomplish the mission and keep the project moving.” 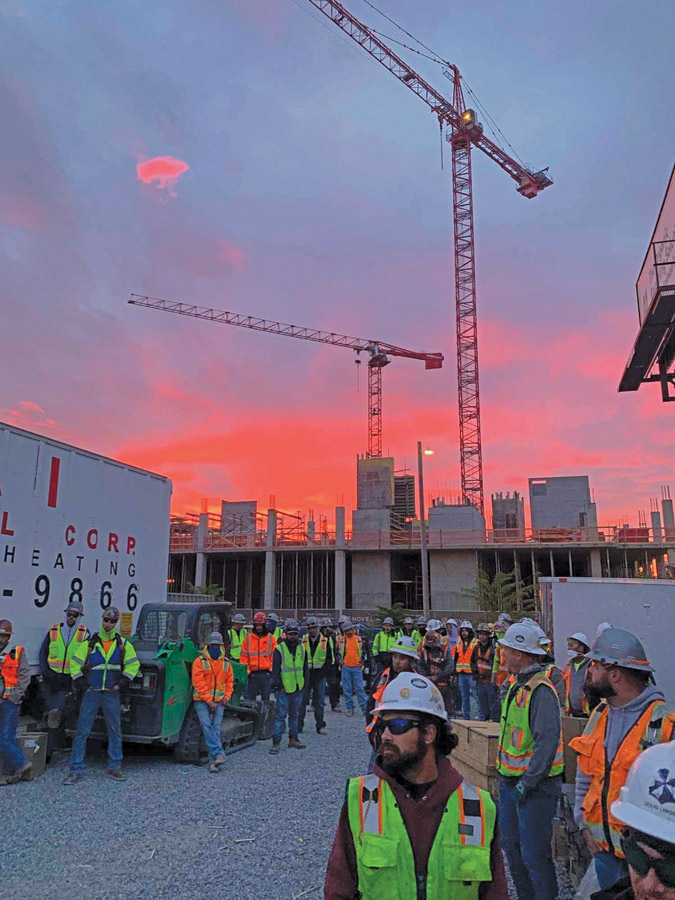 More than 70 subcontractors have participated in construction of NOVEL RiNo, one of several major projects now underway in the River North district.
Photo Courtesy of Milender White and Ironview360

Milender White will have a new challenge later this year when the low-rise portion of the project is completed and tenants start to move in. “We’ll have a plan for continuing the high-rise while ensuring the occupants’ safety,” Joens says.

Those new “neighbors” are likely to arrive quickly, given NOVEL RiNo’s long list of features that includes a 7,800-sq-ft indoor amenity space on the sixth floor that connects to a landscaped roof deck with a pool and spa. The high-rise will also feature a 2,800-sq-ft rooftop restaurant offering views of the mountains and downtown Denver.

“The restaurant is probably one of the neatest features of the building,” Bryan says. “It’ll be open to the public, helping to further integrate the project into the neighborhood.” 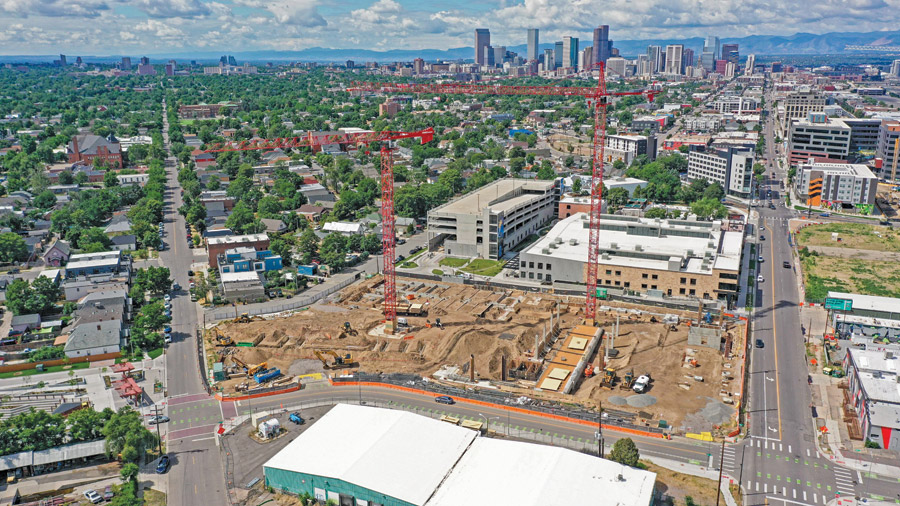 Bryan also credits the design and construction teams’ close collaboration for helping shepherd NOVEL RiNo on its path from the pre-pandemic planning and design work to the cusp of completion.

“It’s a good team that has been really focused on solving problems and helping each other,” he says.

Joens agrees, adding that NOVEL RiNo offers a valuable reminder that engagement of a project’s leaders and subcontractors can’t begin too early.

“The longer we have to find solutions to potential problems in preconstruction, the fewer we’ll have to manage on site,” he says. “That puts us in a better position to meet schedules, costs and other project goals. When that happens, everyone’s successful.”