It’s no accident that some of the Boston area’s largest and most innovative projects—from the tallest downtown tower since the John Hancock building to a $1.3-billion casino in nearby Everett—all had the same mechanical contractor: E.M. Duggan Inc.

Even as a fifth-generation family-owned mechanical contractor that has been in business for more than 130 years, the company continues to break new ground. It has landed work on marquee projects and embraced the latest in construction innovation while cultivating a bottom-up work culture that embraces new ideas.

An early adopter of lean construction and prefabrication in New England, E.M. Duggan’s dedication to staying on the cutting edge has continued with its work on projects such as Winthrop Center tower in Boston, set to be the world’s largest Passive House Institute-certified office building when finished next year (see projects box below).

Over the past few years, E.M. Duggan has landed near the top in ENR rankings of New England specialty contractors. It is No. 3 on the 2022 list, reporting 2021 regional revenue of $222.3 million, up from $185 million for the previous year when it also held third place. The Canton, Mass.-based firm was No. 2 on the 2019 regional list and also is among the largest U.S. subcontractors, ranking at No. 159 on ENR’s latest national Top 600 list of specialty contractors with $185 million in reported 2020 revenue.

E.M. Duggan’s business achievements and robust and innovative work culture helped support the firm’s selection as ENR New England 2022 Specialty Contractor of the Year. “It really comes down to the people you have in your employ and how you treat them,” says Rick Dorci, executive vice president and chief operating officer. “Even through our growth period, we have maintained that family feel. Everyone cares and everyone matters and everyone helps each other out. I think it’s being driven from the top down.”

Boston University Data Science Center: E.M. Duggan is performing plumbing, HVAC and fire protection on the 300-ft-tall building, set to open in October. Designed to look like a stack of books, it will bring mathematics, statistics and computer science departments under one roof. The structure includes 31 geo wells and 100,000 ft of copper piping. “It is probably the most energy efficient and complicated controlling system we have installed,” says Rick Dorci, firm COO. “There are a lot of moving parts to make it carbon neutral.”

Winthrop Center: The subcontractor’s HVAC, plumbing and sprinkler divisions are collaborating to help build the $1.3-billion mixed-use tower. Set to finish in 2023 at 702 ft, it will be one of Boston’s tallest buildings and is on track to be the world’s largest office building to seek certification from the Passive House Institute. The project’s biggest challenge involved penetrating the 4-ft slab on Level 26 that separates the office section at the tower’s bottom, which is designed to Passive House specifications, from the apartments above, which are not. “The slab was loaded with rebar,” Dorci said, requiring the team to thread through plumbing, HVAC and other systems. “It was like choreographing a ballet,” he says.

Parcel 12: E.M. Duggan is performing plumbing, HVAC and fire protection on the $700-million air-rights project in Boston that will house the global headquarters of car-buying website CarGurus Inc. in one tower and a CitizenM hotel in a second high-rise, with a public plaza overlooking the Massachusetts Turnpike between the two. It is scheduled to open in May 2023.

Founded by Edward Duggan in 1891, the firm has been run since the 1980s by fourth-generation family member Vincent Petroni as president, CEO and CFO. Son-in-law Leonard Monfredo represents the fifth generation in the C-suite as principal, having joined the firm in 2009. Dorci joined in 2010. Rounding out the executive team is Kevin Walsh, executive vice president for plumbing, fire protection and special projects, who joined the firm in 2012.

The contractor was one of the first trade partners in Massachusetts to embrace lean manufacturing at its prefabrication facilities. Dedication to lean principles stretches back to the 2000s, when, in the wake of the Great Recession, it began to invest millions in new facilities, personnel and machinery.

“Even through our growth period, we have maintained that family feel.”
—Rick Dorci, Executive Vice President & COO, E.M. Duggan

E.M. Duggan’s Canton fabrication shop is organized by job and workflow, while each product it produces is stamped with a QR code for tracking and distribution. Before shipment, each prefabricated product is tested and inspected, while field supervisors recheck the item at the site before moving ahead to installation, the company notes.

Over the past decade, the company has steadily expanded its prefabrication operation, purchasing adjacent buildings and bringing various trades together while also incorporating BIM modeling. The operation has posted 15% to 20% growth each year, producing piping systems for HVAC, plumbing and fire protection.

“We are putting more work in place with fewer employees than we did in 2012,” Dorci says. E.M. Duggan also is automating the fabrication process, says Jeff Elwell, director of innovation and technology. “We are now 100% paperless in plumbing and pretty close to that for HVAC and fire protection,” he says. 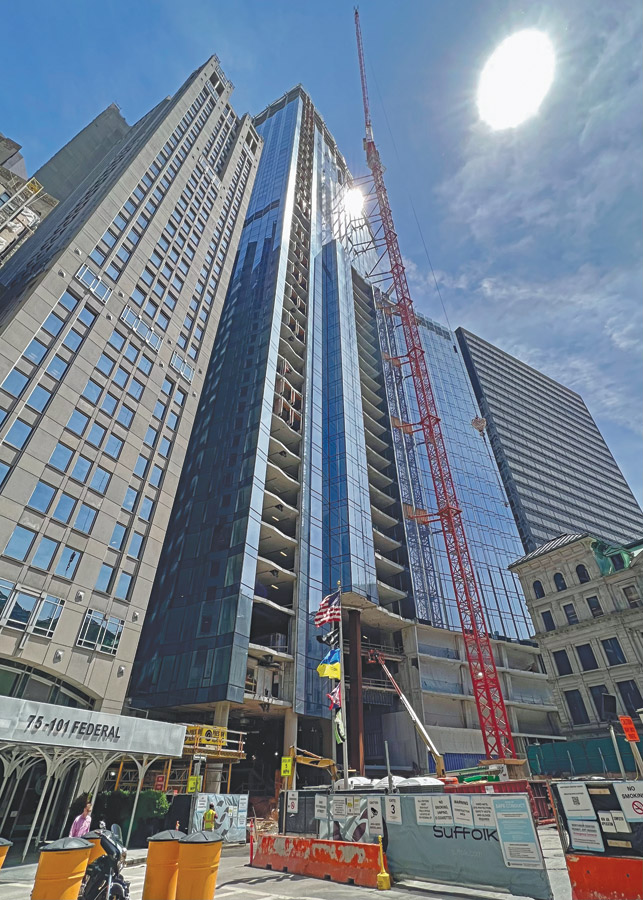 The company has steadily expanded its array of project services, offering HVAC since 2010, with a portfolio that now also includes fire protection, BIM, design and special projects. In the last five years, the company has “installed a billion dollars worth of work,” says Dorci. “We are proud of that.”

The contractor’s key role in the $1.3-billion Winthrop Center project will be evident as the project developers seek Passive House certification for the structure after it opens next year. To meet that elite benchmark, a new building must combine an air-tight envelope with other measures to dramatically cut energy use.

Boston University’s Data Science Center, set to be the tallest campus building when it opens next month, will also showcase E.M. Duggan’s skill in energy efficient installation. “There are a lot of moving parts to make it carbon neutral,” says Dorci.

“We are putting more work in place with fewer employees than we did in 2012.”
—Rick Dorci, Executive Vice President & COO, E.M. Duggan

E.M. Duggan also takes pride in its work culture, attracting talent and giving young employees room to grow, according to Elwell, who joined the firm six years ago as a design trainer. “I was looking for a place where I could push the envelope technology-wise and a culture I could be a part of,” he says. “I just fell in love with it.”

Along with internal relationships, the company also has an impressive record in supporting communities near and far. It works with close to 30 local and national charities, including the YMCA of Greater Boston and St. Francis House homeless shelter, while matching employee contributions. 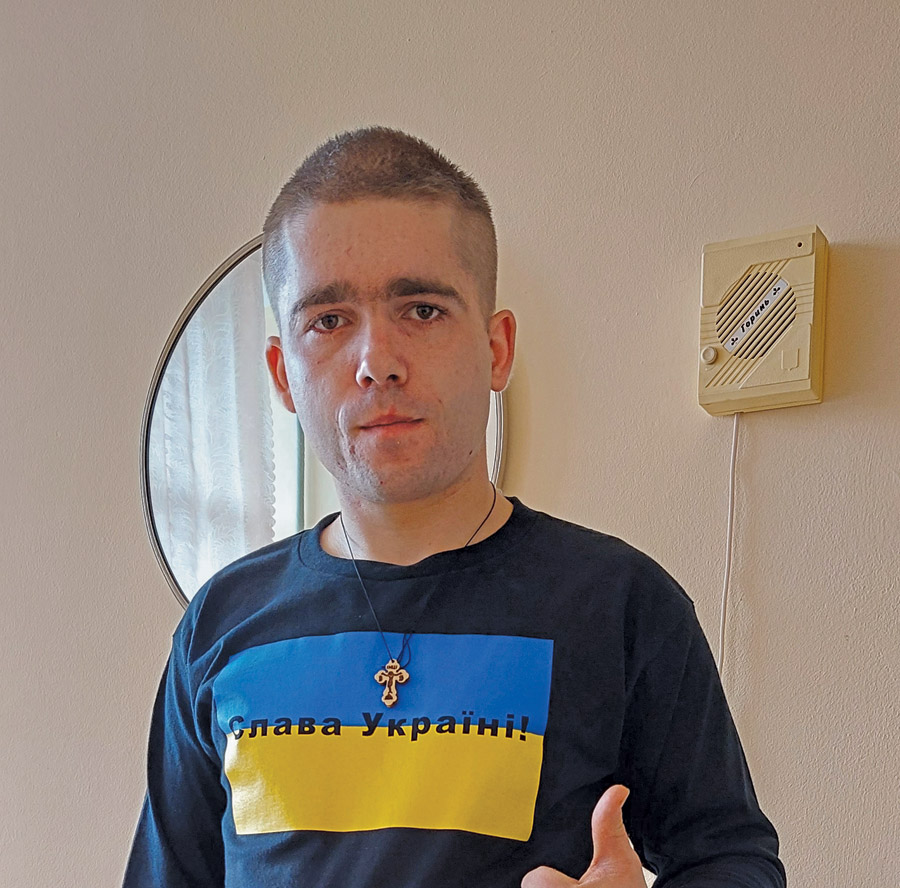 E.M. Duggan has remained in contact with an injured Ukrainian soldier who received one of the shirts company employees created to support the country's war-stricken citizens.
Photo courtesy E.M. Duggan

Typical of such efforts is the way E.M. Duggan employees connected to collect clothing for war-stricken Ukrainians. Employees recently delivered 30 large boxes of clothing and essential items to a Ukrainian church in Boston in a single week at the start of the war with Russia. They also created long sleeve shirts with the Ukraine flag that said "Glory to Ukraine" in Ukrainian, and communicated with an injured soldier who received the shirt.

“I definitely feel that this company actually cares about their employees, which is awesome,” says Stephanie Villanueva-Weeks, a union pipefitter and welder who joined E.M. Duggan five years ago. “Everyone is friendly and willing to help each other out.”