Los Angeles County Metropolitan Transportation Authority (Metro) dedicated the future Expo/Crenshaw station in the Crenshaw District in July. The event was attended by U.S. Secretary of Transportation Pete Buttigieg, FTA Administrator Nuria Fernandez, U.S. Congress members Maxine Waters and Karen Bass and Calif. Lt. Gov. Eleni Kounalakis. The station is part of the $2-billion Crenshaw/LAX Transit Project, now the K Line, slated to open later this year. “This is a monumental accomplishment that many have referred to as the most important investment in the heart of Los Angeles’ Black community in decades,” Buttigieg said at the event.

The California Science Center in Los Angeles on June 1 broke ground on a $400-million Samuel Oschin Air and Space Center, which will become the permanent home of the iconic Space Shuttle Endeavour. The 200,000-sq-ft building will contain 150 educational exhibits spanning three multilevel galleries. The project was designed by ZGF Architects, with Arup serving as structural engineer and MATT Construction leading construction. Evidence Design is in charge of exhibit design.

The California High-Speed Rail Authority board of directors has approved contracts to advance the design of 52.4 total miles that will extend the high-speed rail project into Merced and Bakersfield. Stantec Consulting Services Inc. was awarded the $41-million Merced to Madera extension design contract, and HNTB won the $44.9-million Fresno to Bakersfield (Locally Generated Alternative) extension contract. The contracts are expected to last two years. Stantec and HNTB will work with the authority to finalize the project configuration footprint, advance design work to refine costs and travel time enhancements and to map right of way and utility relocation.

Work on the $35.7-million Miwok Aquatic and Fitness Center for the College of Marin was completed and opened earlier this year on COM’s Indian Valley Campus (IVC) in Novato, Calif. The new 19,500-sq-ft facility was delivered using a design-build effort on behalf of longtime partners Blach Construction (Blach) and ELS Architecture and Urban Design (ELS). Of the aquatic and fitness center’s total 22,196 sq ft, the main building encompasses 18,190 sq ft, the dive center support building is 986 sq ft and the three pools’ mechanical building takes up 3,020 sq ft.

University of Washington and Clark|Abbott, the joint venture team leading design and construction the Behavioral Health Teaching Facility on the university’s Northwest Medical Center campus in Seattle, celebrated the topping off of the project earlier this summer. Work on the new $234-million, six-story teaching and treatment facility began in October 2021 and is on track for completion in winter 2024. Designed by SRG Partnership, the six-story Behavioral Health Teaching Facility will include 150 patient beds and more than 184,000 sq ft of clinical and administrative space.

The Bureau of Reclamation, Friant Water Authority and the California Dept. of Water Resources broke ground earlier this year on a $177-million construction project to restore capacity in a 10-mile portion of the Friant-Kern Canal in Central California. Global design firm Stantec provided planning, environmental compliance, permitting and design of the full 33-mile project, which is estimated to cost $500 million. The 10-mile Phase 1—for which Stantec is providing construction support—is scheduled for completion in 2024. 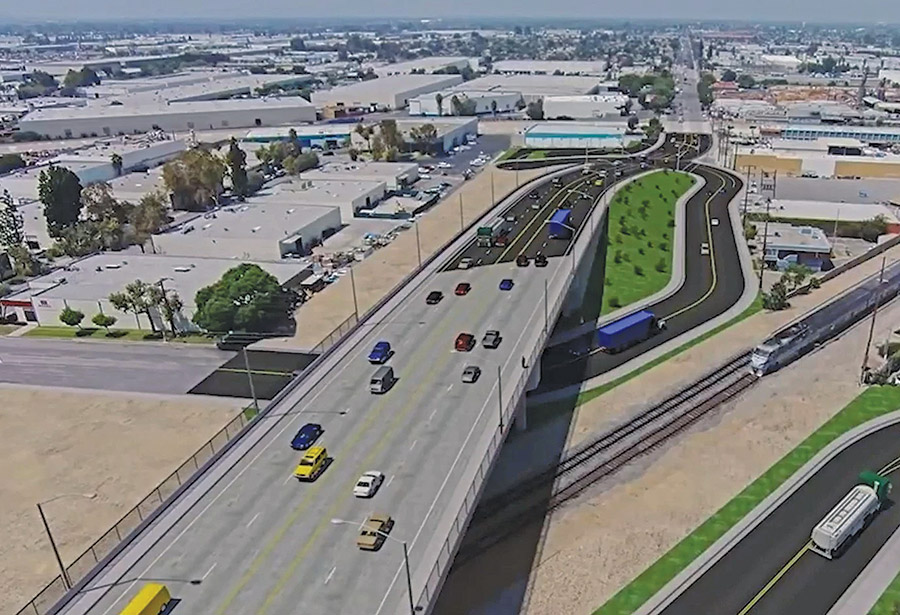 The Los Angeles County Metropolitan Transportation Authority (Metro) has broken ground on the Rosecrans/Marquardt Grade Separation Project that will finally separate freight and passenger rail from auto traffic at the intersection of Rosecrans and Marquardt avenues in Santa Fe Springs section of Los Angeles. Metro will construct a rail overpass bridge to replace the at-grade rail crossing that will reduce traffic congestion, lower speeds and reduce collisions. This $156-million project is expected to be complete in 2025.

The $14.6-million remodeling and upgrade of the Whittier Central Library built by C.W. Driver Cos. was recently completed. The project included a 35,000-sq-ft modernization of the 60-year-old structure and a 4,300-sq-ft expansion. C.W. Driver worked alongside architect CWA AIA Inc. on this project.