Structural solutions and supply chain workarounds have kept a fast-track mixed-use Oklahoma project on pace for a 2023 finish, despite materials shortages and inflation.

Envisioned as a comprehensive two-block development in downtown Tulsa, Santa Fe Square’s first phase of work features a 12-story high-rise that includes 134,978 sq ft of Class A office space on the top six levels and 309,418 sq ft across 720 parking spaces on the lower six levels. 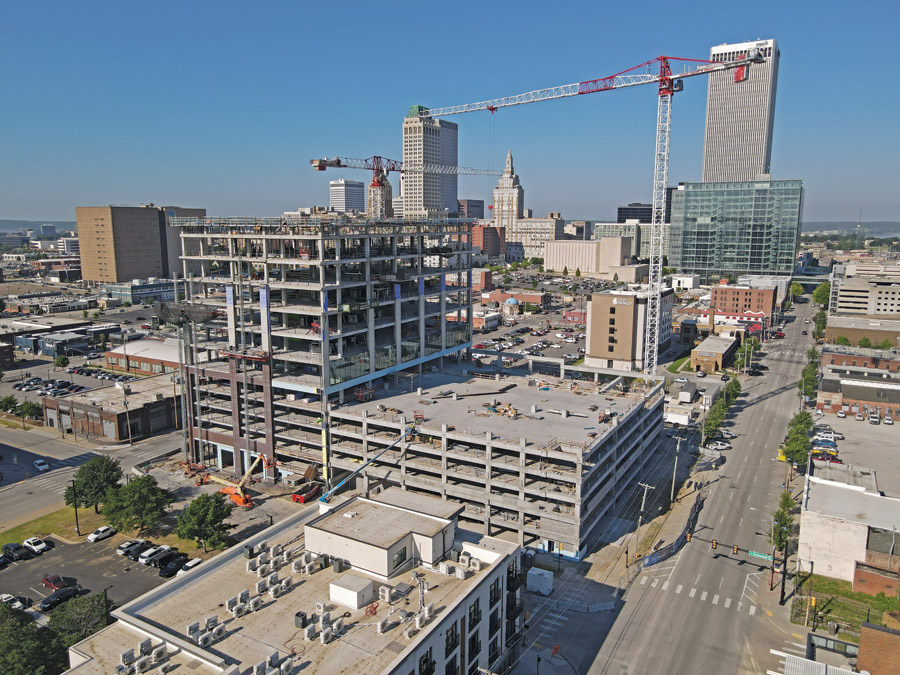 The entire mixed-use project will cost $160 million overall, he adds, with plans to complete everything by 2024.

Santa Fe Square came about “as a desire to invest in Tulsa’s downtown and further the resurgence of the district by creating a diverse mix of uses and building types set around a vibrant public plaza,” explains John Griffin, associate principal with Selser Schaefer Architects.

The building is comprised of 22,200 cu yd of cast-in-place concrete and moment frame with post-tension beams and slabs, including 751,250 lb of post-tension cable, while the exterior façade consists of 213,500 bricks, 14,668 sq ft of cementitious panels and 50,000 sq ft of curtain wall. Supporting the building are 89 piers, with 68 at 30 ft deep and 21 at 45 ft deep, along with grade beams and spread footings.

The construction manager-at-risk project is on a fast-track delivery, made possible thanks to involvement of the entire team from the conceptual design stages, Griffin says.

“One of the principals has been working on the project in one way or another for over 18 years—it represents the culmination of 20 years of development on downtown Tulsa’s east side,” Nelson explains. “The team was first assembled in 2016 [and] ultimately, it took a TIF [tax increment financing] district from the city of Tulsa and a lead office tenant for the project to get underway.” 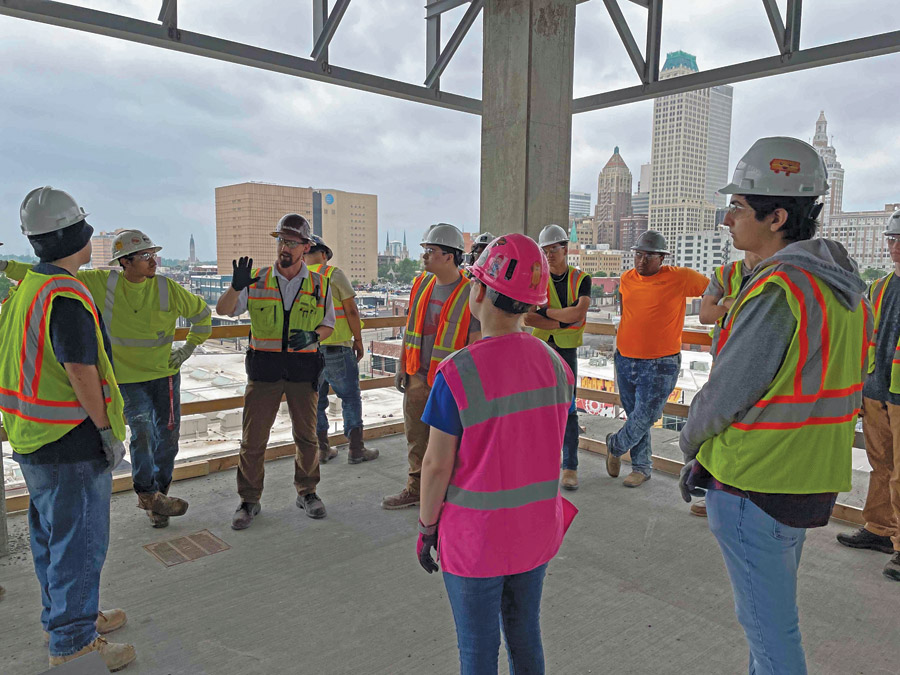 Staying in the Lines

Construction started in July 2021 with completion targeted for March 2023. Achieving that timeline is a primary goal, as the anchor tenant’s lease is expiring just ahead of that date, explains Stephen Hill, senior project manager with Manhattan.

“The project was fast-tracked with the site and structural work beginning before the design was completed,” Hill says. In addition, five of the six office levels will see tenant improvement happening at the same time as core and shell work, necessitating coordination among multiple crews on site and with the city of Tulsa on permitting issues.

A tight site adds to the complexities. The edge of the project sits right near the property line adjacent to city sidewalks, requiring rerouting sidewalks and strategically closing streets.

To help, Manhattan’s logistics planning team rethought how to stage materials and how trades accessed the building envelope, Hill says. For instance, “instead of fencing in a lane of the street to accommodate material deliveries and activities like concrete pump trucks, we limited the site fence to the curb line, and pushed those activities outside the fence,” he adds.

To get the office building and garage built at the same time, the team came up with a two-crane hoisting plan. Limited space around the building did not allow for a crawler crane or other mobile option. The spans involved are larger than a single tower crane could manage—and “a single tower would not have the capacity to support the fast-track project,” says Darren Cottom, project director with Manhattan.

“There was only about 10 feet of space between the end of the jib of the south crane and the tower of the north crane, and the swing radius of the cranes could not enter the public right of way,” Hill says. “With the building and the garage abutting the sidewalk of the right of way on three sides of the property, the crane movement was constrained. Each crane had a half moon of swing space inside the footprint of the jobsite, and those half-moons overlapped. [So,] both crane operators, and flaggers and riggers below followed a stringent communication protocol to make sure activities for one crane didn’t interfere with the other.”

The north crane was dismantled in July; to date, the project has had zero lost time incidents over 194,559 worker hours, Hill says. 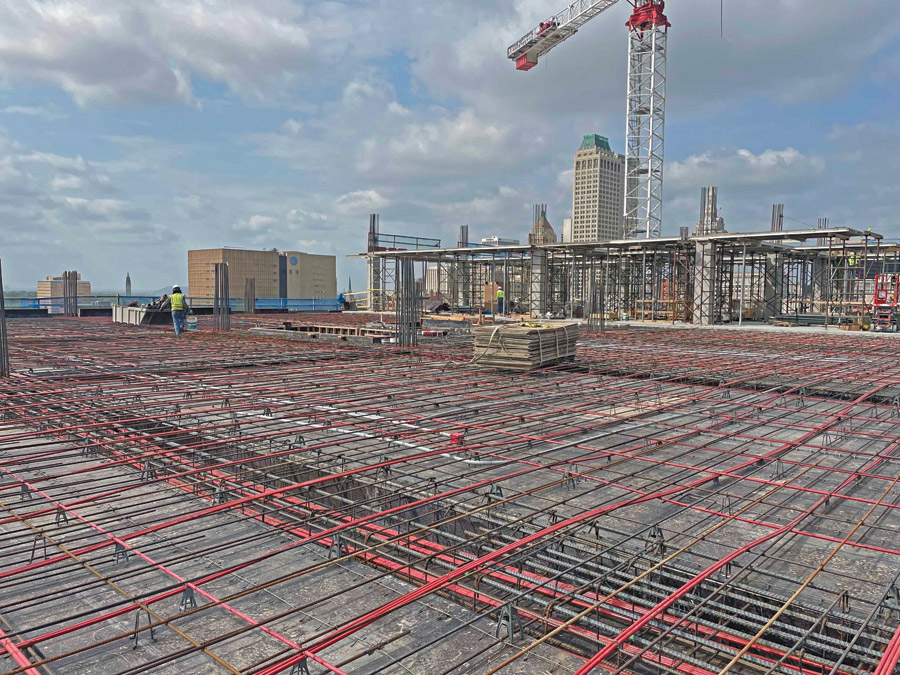 Ahead of the Supply Chain

The initial Guaranteed Maximum Price happened during COVID, so a value management process started immediately after work began and continued until design completion five months into the project, Hill says.

“One of the most notable alternative examples was the lighting package. Manhattan worked with a vendor who put together a package of optional fixture manufacturers, which saved approximately $450,000 for our client,” Hill adds.

Working around materials shortages required some out-of-the-box thinking. Submittal timelines were cut drastically, Griffin explains. The thermoplastic polyolefin (TPO) roof membrane was ordered nine months out, but still hasn’t arrived, so the team is using a temporary roof membrane to get the building dried in and on schedule, he adds. 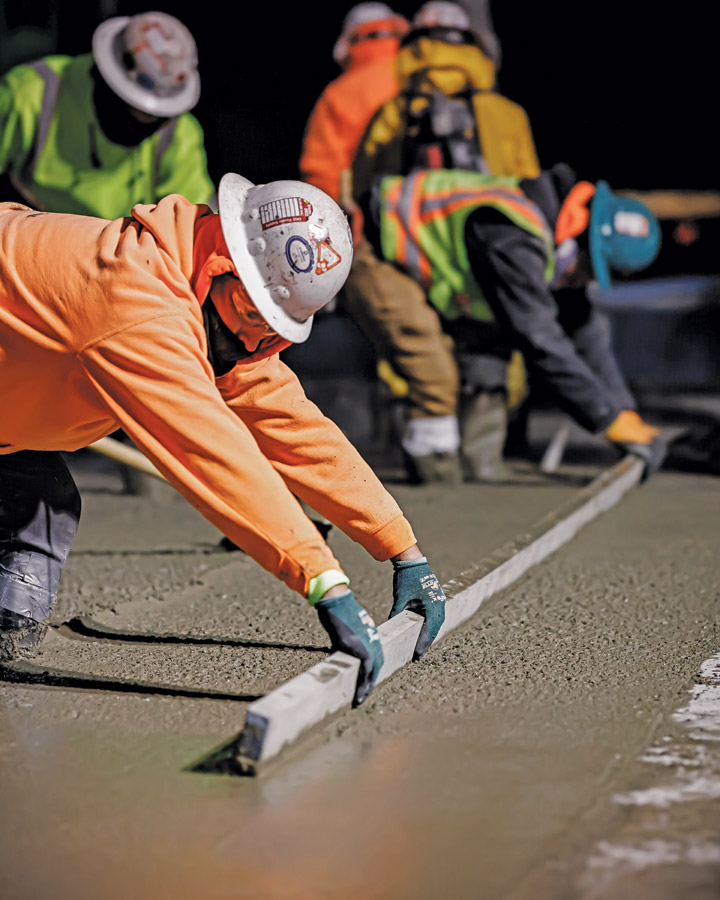 One key strategy has been to procure materials early and coordinate associated billing of stored materials to facilitate schedule certainty, Hill says. The team has also made use of on-site, off-site and third-party storage for those items and even proposed alternate materials that were more readily available, he adds.

“We’ve also set the project up with options with the submittal of multiple manufacturers so that in the event of unexpected supply chain issues, multiple options are available,” Hill says. If that doesn’t suffice, “the team also has pre-planned temporary construction strategies to keep the project on schedule, including temporary power for delays in electrical infrastructure components, temporary hoisting for elevator delays, and temporary roofing.”

An example is the sheathing material that goes behind the brick or cement panels, Hill notes. The team has alternatives from three different manufacturers, so installers have flexibility in accessing materials. There are also multiple alternatives for roofing cover boards.

“Lead times and price escalation have led to a continual process of value engineering and redesign along the way,” Griffin says. “Add into this equation last minute direction changes due to future tenant desires for exterior balcony space, etc., and it has kept the team at an all-out race from the beginning to finish.”

Other setbacks such as heavy snows, ice storms and wind in February, March and April has the team doing targeted acceleration, primarily with structure and envelope trades, to make up any lost time, Hill says. 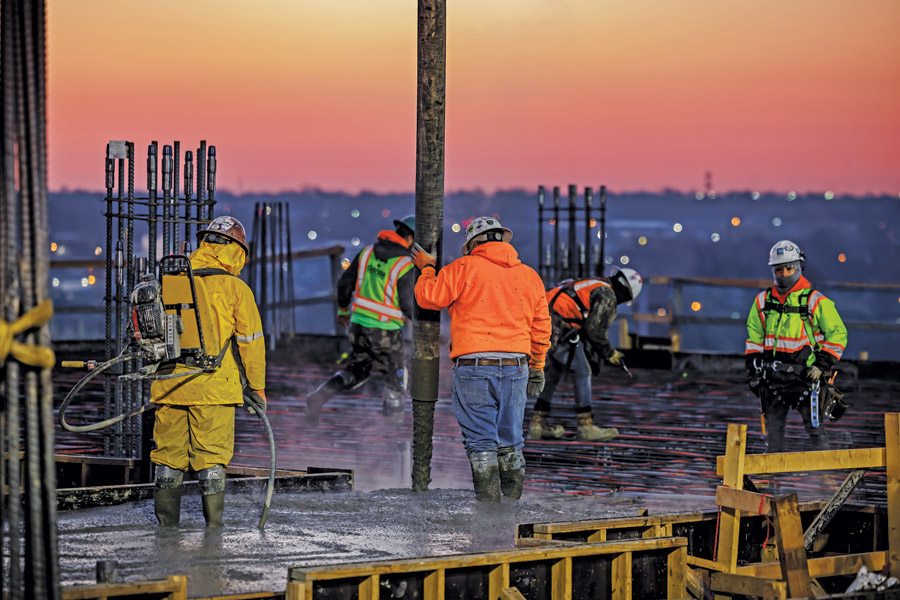 Design and construction overlapped extensively. Work began on the building envelope before completion of the structure, which meant coordinating multiple trades.

“In our two-week look ahead, we coordinate the trades in the most efficient way possible while maintaining safety,” Hill explains. “For example, when the formwork is being flown in and out for pouring an upper floor deck, no one can work below, so anyone working the envelope has to stop work until the formwork lift or lower activity is complete.”

Cantera Concrete and Click Engineering joined the project team early to help ensure the building has the most efficient structural system from both a cost and schedule standpoint, explains Cottom. Working closely with Cantera and Click, the team was able to quantify steel and post-tensioning “to a level of detail that allowed us to confidently secure these materials early to control the cost and delivery,” he adds.

Binding the glazing work early at design development level documents also helped mitigate escalation and ensured that the team could expedite the aluminum to the project in time to support the schedule, Cottom adds.

“Lead times and price escalation have led to a continual process of value-engineering and redesign along the way.”
—John Griffin, Associate Principal, Selser Schaefer Architects

“Aluminum jumped 10% around this time and I believe we were able to avoid this escalation,” he says. “We used a unitized curtain wall system, which enhanced quality and has been great out in the field from a schedule standpoint.”

As part of the structural effort, Selser Schaefer, Click Engineering and Manhattan worked to figure out a way to minimize the column sizes in the building to help both maximize the space within and to help reduce costs.

“Typical tall concrete buildings do not have the columns take up valuable rental space,” explains Jacob Click, president of Click Engineering. “Concrete shear walls are employed to resist high wind loads.” But building concrete shear walls can be expensive, so the team decided to use moment frames instead in both directions, he says.

The team turned to reinforcement couplers instead of a more traditional lap splice to help shrink the project’s 33 columns that go from the ground to the top. 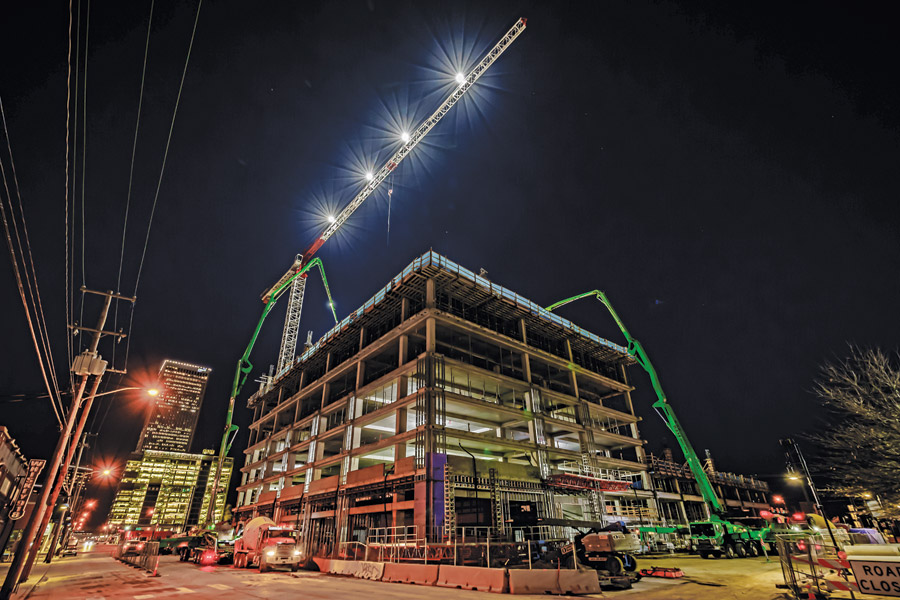 “Grip-Twist threaded rebar couplers were used in some of the columns to keep column sizes as small as possible,” says Mark Wilson, Tulsa division manager with Cantera Concrete.

This strategy helped bring the column sizes down 6 in. to 8 in. in all directions to 24 in. x 34 in. at levels 1 through 6, and 24 in. x 24 in. at level 6 up through the roof, says Jayesh Gautam, senior project manager with Click Engineering.

Another crucial component is the concrete in the columns. The team took advantage of recent improvements in concrete strength technology “by specifying 8,000 psi concrete for columns at the lower six levels, which also helped in reducing column sizes,” Click says. “The columns above level 6 were 6,000 psi. The slab concrete strength was then back calculated to be 6,000 psi to not fall foul of the concrete code requirement that if the concrete slab strength is different from column strength by a factor of more than 40%, complicated pouring timetables and formworks are required.”

By keeping the strength differences to within 40%, “the cost increases from the higher than normally specified concrete strength of 5,000 psi was a much smaller figure than the savings resulting from labor and schedule impacts,” Click explains.

The team also used SmartRock sensors in the concrete pours to help reinforce data from concrete testing breaks and determine when or if to break cylinders to allow for earlier tensioning of post-tensioned tendons and earlier formwork removal, he adds.

To accelerate the concrete placement schedule, Cantera, Click and Manhattan “worked out a process to allow stressing of 50% of the tendons at 3,000 psi and the other 50% of tendons after concrete reached the specified compressive strength of 3,750 psi strength,” Click says.

Additional design changes were made to ensure a more closed rainscreen system that would overcome potential water issues down the road, Griffin explains.

This meant “substantial design changes” on the eyebrow of the building to ensure the best design possible for “shedding water as well as utilizing inverted channels and horizontal flashing to keep water from getting behind the fiber cement panel system while still providing adequate airflow and ventilation,” he says.

In addition, the team analyzed parking deck slopes to drains in order to minimize the amount of concrete needed to form crickets, Griffin says. The sloped slabs were reoriented, thereby reducing the number of downspouts.

As of June, Manhattan reports the project is approximately 58% complete, within budget and on schedule.

“The project will transform the east side of Tulsa’s downtown,” Nelson says. “The district had already been significantly redeveloped with restaurants, retail and multifamily, but this project alone will more than double the total investment in the neighborhood and solidify its place in the city.