Ongoing dry weather in the western U.S. conducive to wildfires burning in New Mexico and Arizona has also helped drop the waters of Lake Powell to a level approaching the minimum needed to operate the Glen Canyon Dam hydroelectric power plant.

“This year the Colorado River Basin has experienced extremely variable conditions with a record high snowpack one month, followed by weeks without snow,” David Palumbo, acting commissioner of the U.S. Bureau of Reclamation, said in a statement. “This variable hydrology and a warmer, drier west have drastically impacted our operations and we are faced with the urgent need to manage in the moment.”

Palumbo appeared before the U.S. House Appropriations Committee April 27 to make his case for the bureau’s 2023 budget proposal, which includes plans for spending on projects beyond the $1.6 billion per year through 2026 appropriated by the Infrastructure Investment and Jobs Act for water and related resources.

With no apparent sign of an end to droughts in the West, he said the bureau is looking to address water issues with multiple solutions, including conservation, increased storage, water reuse and desalination.

“Many water users, power contractors, tribes and related communities have had to make significant sacrifices,” Palumbo said. “These situations highlight the need for immediate actions as well as thoughtful planning for on-the-ground work to make both our infrastructure and operational decisions more resilient to withstand future water resource scarcity and variability.”

Lake Powell is part of the Colorado River system and the country’s second-largest reservoir, capable of storing more than 25-million acre-ft of water at the Utah-Arizona border. As of May 1, it held less than 5.5 million acre-ft of water, and its elevation was only about 32 ft above the minimum level needed to operate the 1,320-MW power plant.

Bureau of Reclamation officials aim to keep the water level at least 35 ft above the minimum operating level, but the water level has been below the targeted buffer level since March.

Wayne Pullan, the bureau’s Upper Colorado River Basin regional director, says he expects the spring runoff to help resolve the Lake Powell deficit in the short term, so the agency is not planning any further action to address the “temporary dip.” However, lake water elevation is projected to fall below the 35-ft buffer again later this year and officials may take additional action then, he adds.

Those 350,000 acre-ft of water will be released from Lake Powell to Lake Mead between June and September. But there are impacts in the meantime. As of April 25, the Southern Nevada Water Authority said the water level in Lake Mead had dropped below one of its intake valves for the first time since it began operations. As a result, the authority is using its Low Lake Level Pumping Station, which completed construction in 2020. 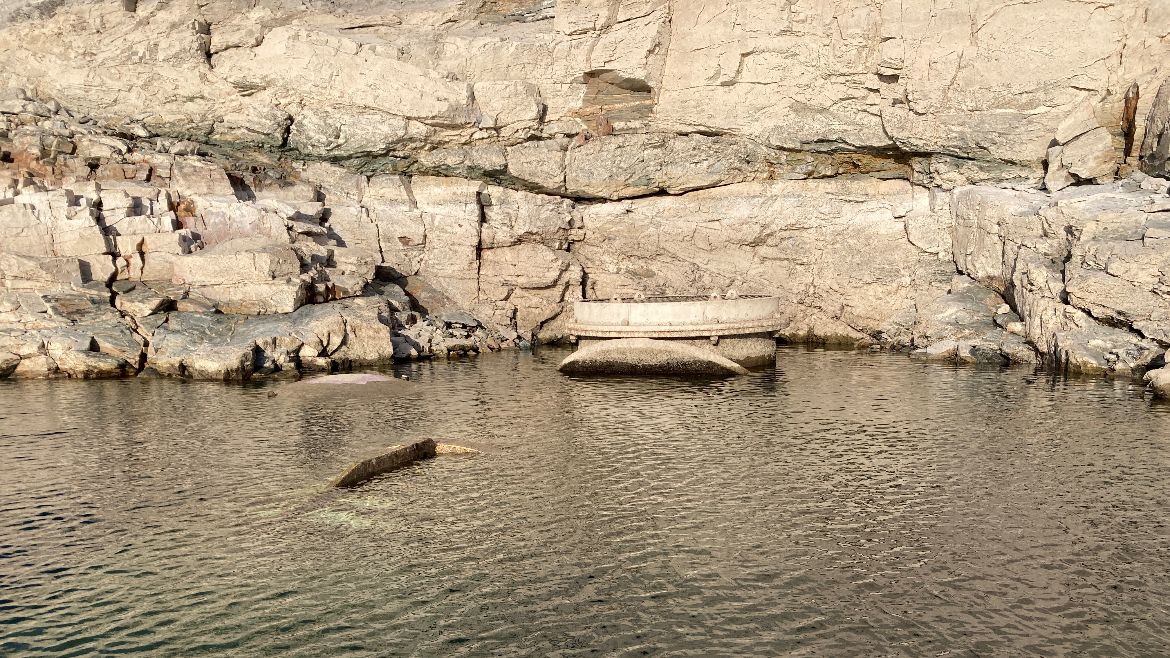 Lake Mead's water level dropped below one of its intakes. Photo by Southern Nevada Water Authority

The authority instituted summer watering restrictions as of May 1. If water levels in Lake Mead fall too low, it warned that the Hoover Dam could no longer release water further downstream to California, Arizona and Mexico. The Metropolitan Water District of Southern California, which imports water from the Colorado River and elsewhere to an area that includes Los Angeles, also is imposing water restrictions more severe than any in history, according to Adel Hagekhalil, district general manager.

The bureau updated its five-year projections for Lake Powell and Lake Mead in February. The projections anticipate a 23% chance of Lake Powell’s level dropping below the minimum for the power plant in 2023, which is down from the 34% odds projected for 2023 as of last fall. At Lake Mead, the bureau does not anticipate any chance of the water level falling below the minimum needed to operate the Hoover Dam power plant.