This website requires certain cookies to work and uses other cookies to help you have the best experience. By visiting this website, certain cookies have already been set, which you may delete and block. By closing this message or continuing to use our site, you agree to the use of cookies. Visit our updated privacy and cookie policy to learn more.
Home » West Coast Project Starts Remain Steady In 2021
CaliforniaNorthwestCalifornia Construction ProjectsNorthwest Construction Projects
Top Starts | ENR California & Northwest Region

Contractors find plenty of new work even as they keep a close eye on infrastructure act funding and surging inflation.

After project delays and cancellations that resulted from pandemic lockdowns in 2020, construction activity across the region remained healthy   again in 2021. Many of the largest contractors on the West Coast reported increased construction starts and saw a subsequent bump in revenue.

Turner Construction partnered on two megaprojects at the top of this year’s California list. The firm is part of a joint venture with Flatiron on the $2.6-billion San Diego International Airport Terminal 1 project, which broke ground in October. The 1.2-million-sq-ft building with 30 gates will replace the airport’s 1960s era terminal when completed in 2027.

Turner, along with JV partner AECOM Hunt, also broke ground on the $2-billion Intuit Dome in Inglewood, Calif., which will be the new home for the NBA’s Los Angeles Clippers after it opens in 2024.

Lisa Ballantyne, senior vice president at Turner, says the company saw several stalled projects moving forward in 2021, along with new work. Activity in 2022 is also trending up, and Ballantyne expects the company to be back to 2019 levels by the end of the year. Still, concerns about escalations, particularly with material costs and availability, have made some projects tricky to manage as trade partners may experience cost hikes with little notice from vendors.

“We’re partnering with owners to discuss that volatility and discuss what we collectively think is the responsible thing to do, depending on when a project will go ahead,” she adds. “We are constantly monitoring that.”

“Over the next six to 12 months, we don’t see things slowing down, but everything points to a recession.”
—Mike Myers, Regional President for Southern California, McCarthy Building Cos.

Still, given the amount of new work Turner sees on the horizon, Ballantyne says the company is optimistic about the market. “As of today, 2023 and 2024 look awesome,” she says. “It’s a really exciting time.”

Despite concerns about a big drop-off in activity during the pandemic, Brian Gracz, Southwest regional leader at DPR Construction, says the company remained steady in 2020 and 2021, largely due to its existing health care work and a surge in activity in life sciences. “We grew in California through the pandemic in 2021, and 2022 looks strong as well,” he says.

Among its 2021 starts, DPR broke ground on the $247-million Universal Health Services Inland Valley Master Plan project in Wildomar, Calif., in April. In December, DPR started work on the $225-million Hillcrest Campus Outpatient Pavilion and Parking project for the University of California at San Diego.

Gracz says 2022 is trending upward, and he sees a strong 2023 on the horizon. Although the higher education market pulled back in 2020 and 2021, he expects opportunities to improve. Meanwhile, health care remains strong and new opportunities in advanced manufacturing are emerging. DPR is particularly bullish on the life sciences market. “That market has had a tremendous amount of investment and not all of that has been put in place yet,” he adds. 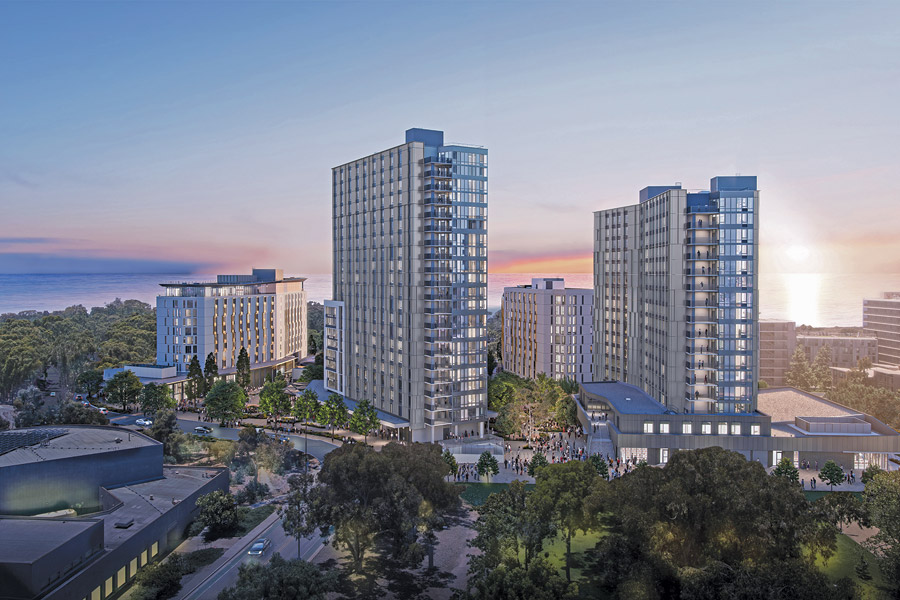 The University of California at San Diego’s Theatre District Living and Learning Neighborhood is a 1.4-million-sq-ft design-build project led by HKS and Kitchell Contractors Inc.
Photo courtesy of HKS

Among its starts in 2021, McCarthy broke ground in April on the $158-million Center for Advanced Care Medical Office Building & Parking Structure for UC Irvine.

Looking ahead, Myers says he is “cautiously bullish” about the firm’s business prospects. He says his region is experiencing a record sales year, which could lead to big growth through 2024. “Already this year, we’ve seen a pretty significant uptick in opportunities,” he says. “In terms of revenue, we could be up 10% to 15% in 2022. That’s higher than we would have thought last year.”

Still, Myers says those hopes are tempered by a cautious view of the national economy, especially as the Federal Reserve raises interest rates to cool inflation. “Over the next six to 12 months, we don’t see things slowing down, but everything points to a recession,” he says. “It’s just a question of how deep it will be.”

Meanwhile, passage of the $1.3-trillion federal Infrastructure Investment and Jobs Act has many firms eyeing strong opportunities in the infrastructure market for the foreseeable future. 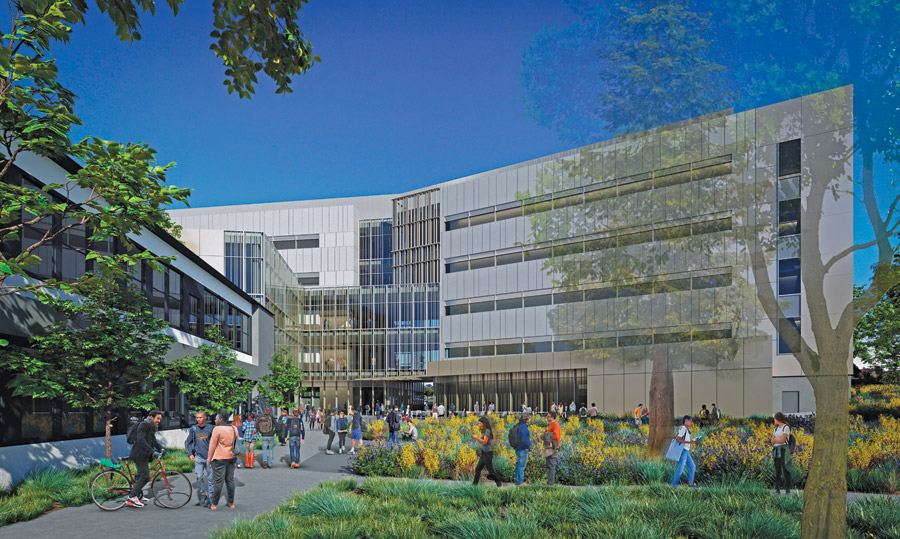 Brian Dowd, senior vice president of Granite Construction’s California Group, says the company had a strong 2020 as lockdowns led to reduced traffic around many of its jobsites. Although state projects continue to be funded through California Senate Bill 1, Granite saw activity dip in 2021 as projects that were accelerated in 2020 finished up and new work was slow to emerge from government agencies. Granite broke ground last summer on the $151-million Segment 4B of Highway 101 from Carpinteria to Santa Barbara.

Fluctuations in materials and energy costs have added to the challenges, Dowd says. “We are trying to stay out in front of it and notifying customers if we have to add an energy surcharge,” he says. “That has been a big concern.”

Looking ahead, Granite hopes to see projects with IIJA funding start to advertise late this year and break ground in 2023. While funding under the American Recovery and Reinvestment Act of 2009 focused heavily on shovel-ready work, Dowd says he expects to see a wide range of work generated by IIJA, including large infrastructure projects.

Major solar work continued to roll out in 2021, including the $1-billion Edwards & Sanborn Solar + Storage project in Mojave, Calif. When completed in 2023, the facility will have a capacity of nearly 1 gigawatt of solar power with 2,400 megawatt-hours of storage, making it one of the largest such facilities in the world. Still, the industry faces major headwinds, says Eric Grenz, vice president at Mortenson Construction, the EPC contractor on the Edwards & Sanborn project. Grenz says the cost of modules used in construction of solar and storage facilities has gone up by more than 20% in the last year as many panels have been held up in shipping or delayed at U.S. ports. In some cases, Customs and Border Patrol is detaining shipments to verify that modules aren’t using Chinese components that potentially violate trade policies, he says.

While Grenz says he sees the potential for more large utility-scale solar projects in the coming years, much of that depends on federal action around availability and the pricing of solar components. “The current administration is high on clean energy and wants to push forward, but in the last 18 months, we’ve taken two steps backward,” he says.