Contractors across the five-state region of Arkansas, Louisiana, Mississippi, Oklahoma and Texas are rebounding from the pandemic and working through a pipeline of energy, infrastructure and hospitality projects. The first 25 of this year’s Top Project Starts represent $22 billion in work that began in 2021 across the region, compared with $14.5 billion for 2020. ENR does not rank projects with confidential costs.

“It feels like we’ve navigated everything else pretty well, but these two issues keep coming up,” says Meloni Raney, TEXO president and CEO. “You can’t just go create more people or more supplies—we’re dependent on a lot of other factors.”

Materials and supplies are all over the board, but in every case those costs are increasing—if you can even get those materials, adds Bob Wilson, executive director with the Associated General Contractors  (AGC) of Mississippi. “Our [contractors] don’t know how to bid a job these days because they don’t know what it will cost. If the contractor has a relationship with a private developer, they will allow the contractor to include a clause that the price will depend on the material cost once it arrives—but that isn’t the case in public projects. We’re fighting this, and everyone else is too.”

“Dallas is the second-largest construction market in the country and the second-largest growing market in Texas ­— after Fort Worth — so we’re definitely in the midst of a boom,” Raney says. “We must find ways to work with owners and figure this out together, versus pinning it against each other.”

There are a number of positives coming out of these challenges, she notes. “Contractors have had to get very creative and innovative, and it’s been exciting to see them develop different ways of doing business and solving problems. This problem has forced creative thinking, and that is one thing that has been good for our industry,” Raney says.

To address the labor shortage issue—not a new challenge for this industry—construction associations and their contractor members are getting creative, looking for ways to make the industry more attractive to people who have never considered a career in construction. 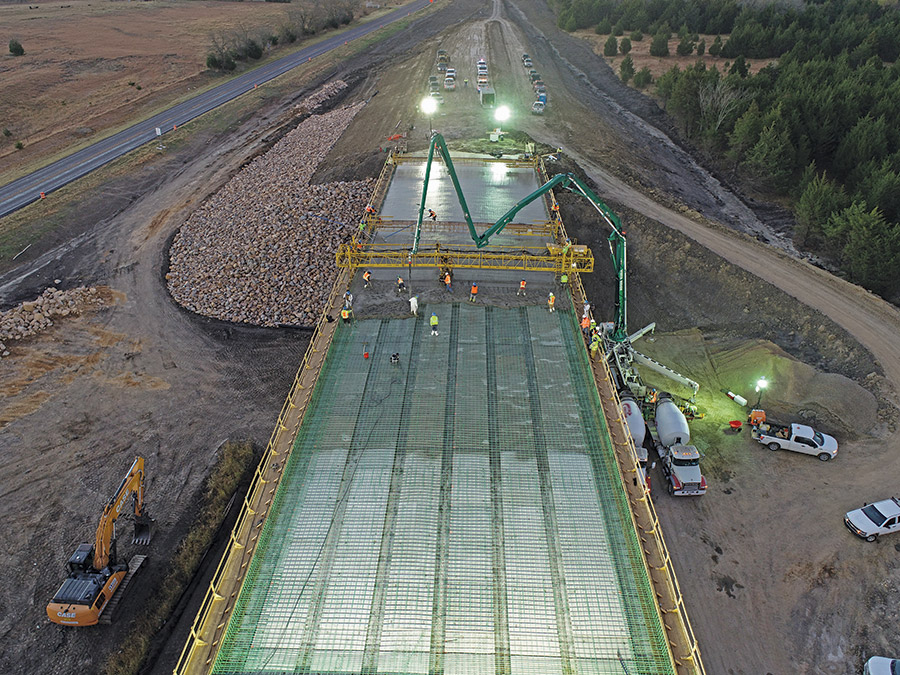 Flatiron and its team of subcontractors are building a mile-long bridge across the new Lake Ralph Hall Reservoir, which is under construction outside Ladonia, Texas.
Photo courtesy of Flatiron

Raney says industrial warehouse development is growing at a rapid pace in the Dallas-Fort Worth area along with multifamily construction. The office market is also strong, rife with renovations, expansions and firms looking to move their headquarters or open new offices in the area.

“The growth is such a domino effect; as we have more housing, they’ll want retail and grocery around them. It’s a matter of letting the dominoes fall. The infrastructure to support the growth is keeping everyone busy,” Raney adds.

Thirty miles north of downtown Dallas, the $520-million Omni PGA Frisco Resort project is underway. The largest resort currently in development in the country, the venue is scheduled to open in spring 2023.

Significant projects are also happening at major Texas airports, including a $2-billion project at the Dallas-Fort Worth International Airport that will reconstruct its busiest concourse over the next several years. At George Bush Intercontinental Airport in Houston, a $970-million international terminal project includes construction of the new Mickey Leland International Terminal that will replace the existing Terminal D and the federal inspection services building renovation and expansion.

“Contractors have had to get very creative and innovative, and it’s been exciting to see them develop different ways of doing business and solving problems.”
—Meloni Raney, President and CEO, TEXO

Arkansas construction held up extremely well through the pandemic, says Bill Roachell, president of Associated Builders and Contractors’ (ABC) Arkansas chapter. “Contractors have good pipelines of work built up and are staying busy. Construction has increased by 24% since this time last year.” He notes that lead times are much longer because of supply-chain issues.

Large projects include an Amazon distribution facility in Little Rock and Walmart’s new global headquarters in Bentonville, where a 350-acre site will comprise more than 30 buildings for the new Walmart Home Office Campus. Demolition, infrastructure and utility construction began in 2019 and the project will be completed in phases through 2025.

Meanwhile, Louisiana is experiencing rebuilding efforts stemming from its multiple hurricanes, spurring a significant amount of commercial and residential work over the next year, says David Helveston, president of ABC’s Pelican Chapter.

The state has a long history in the oil and gas industry and is also positioned to be a leader in the move to more renewable and sustainable energy. One of the largest projects, the $9.2-billion Grön Fuels renewable fuel complex, is a multiphase project being constructed over several years in Port Allen, on the Mississippi River. The facility will produce green hydrogen, renewable diesel, arctic spec renewable diesel, aviation fuels and bioplastic feedstocks. It is projected to bring more than 5,000 direct and indirect jobs to the area over a 10-year period. 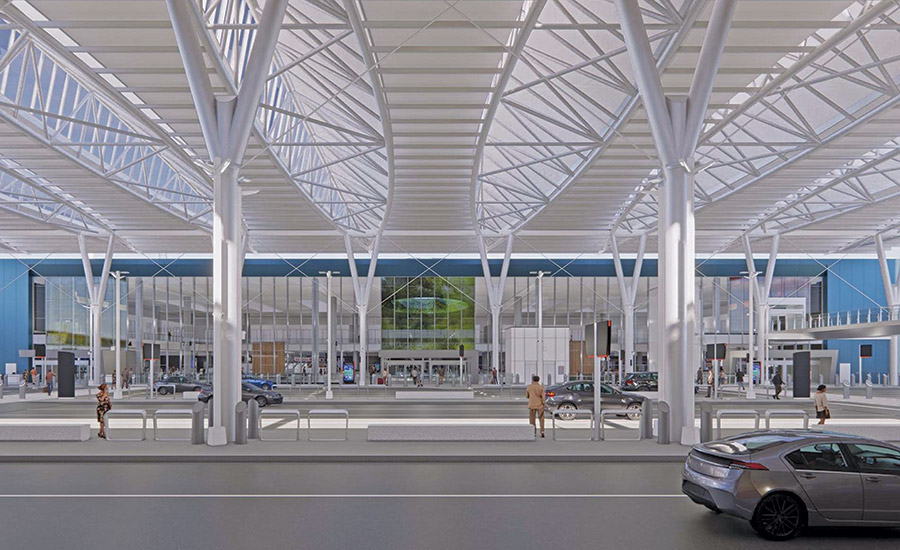 Two other projects should start in the next year, both using wood waste as feedstock. The first, Origin Materials, a $750-million biomass facility on 150 acres in Geismar, La., is expected to create 850 indirect jobs in the metro area and 500 construction jobs. The plant, which is aiming to be operational mid-2025, will convert an estimated 1 million dry metric tons of wood residues each year into products for a wide range of end markets.

A project similar in size and scope, the Strategic Biofuels Louis Green project in northern Louisiana at the Port of Columbia will be the first renewable fuels project in North America to achieve negative carbon emissions and the most carbon-negative of any liquid fuels plant in the world. The feedstock for the plant is forestry waste from managed and sustainable forests.

Renewable Energy Group broke ground in October on the $950-milion improvement and expansion of a renewable diesel production facility in Geismar, La.  The project will take total site production capacity from 90 million gallons per year to 340 million gallons per year and bring more than 60 permanent jobs and up to 500 construction jobs to the area.

An increase in infrastructure spending is spurring highway projects in Louisiana and Mississippi. The first stage of a multiphase effort to widen Interstate 10 in Baton Rouge kicked off a couple of months ago.

Huge growth is also coming to the Mississippi Gulf Coast, says Bob Wilson, executive director for AGC of Mississippi. When gaming was approved for Mississippi, it had to be restricted to locations on the water, and the Gulf Coast area has seen casinos, restaurants and other related development as a result. “Hospitality projects were on hold for two years during the pandemic, and now they’ve kicked off again,” he says.

“Hospitality projects were on hold for two years during the pandemic, and now they’ve kicked off again.”
—Bob Wilson, Executive Director, AGC of Mississippi

Mississippi’s future looks good, Wilson adds. Population growth in the northern part of the state is spurring housing and entertainment projects, and a warehouse boom is taking place near the Memphis airport’s FedEx hub. “If we can get our infrastructure plan through the legislature, that will help the central portion of the state,” he says. “Contractors are waiting with bated breath. It won’t be as big of a boom as hospitality, but it will be a good amount.”

Wilson says one of state’s largest employers, Nissan, recently announced it will be expanding its facility to build electric vehicles and trucks, which will add another 1,200 employees. “There are also two additional megasites to offer up to attract large developers,” he says. “A site in Madison County, near the Nissan plant, is getting a lot of interest [as is] a second site in Desoto County, where our highest growth is taking place.”

Commercial construction is faring well in Oklahoma as well, with significant projects starting in 2022 in the health care and hospitality segments, says Douglass Tapp, CEO with AGC of Oklahoma. “The industry appears to be strong going forward [and] will further spotlight the challenges being experienced in the lack of skilled labor and material supply chain struggles.”

The $280-million Norman Regional Healthplex Expansion in Norman, Okla., is consolidating acute care services currently housed at Norman Regional Hospital. The resulting 307 inpatient beds will require the expansion of core services such as surgical suites, intensive care, an expanded emergency department and other ancillary services. A new patient bed tower will include 96 new patient hospital rooms, and additional development will include an ambulatory care center and cancer care center.