Mountain States On the Scene for March 2022

In 2020, Springfield School District in Colorado was awarded a $40-million BEST Grant from the state to transform its aging school buildings. Springfield is located in Baca County, the southeastern-most county in Colorado, and the district is the largest one in Baca, serving more than 300 students. The town’s high school was originally built in 1908, with pre-kindergarten through middle school buildings following later on a 23-acre site. The current project, led by GTC, working with Diversified Consulting Solutions and TreanorHL Architects, includes demolition of most of the old buildings and construction of 63,000 sq ft of additions, including a two-story classroom wing, a gymnasium complex and more administrative space. The work also includes 19,000 sq ft of renovations, which will consolidate the district into a single building for pre-K through 12th grade. The project is being phased over 24 months to allow the campus to remain operational throughout construction. 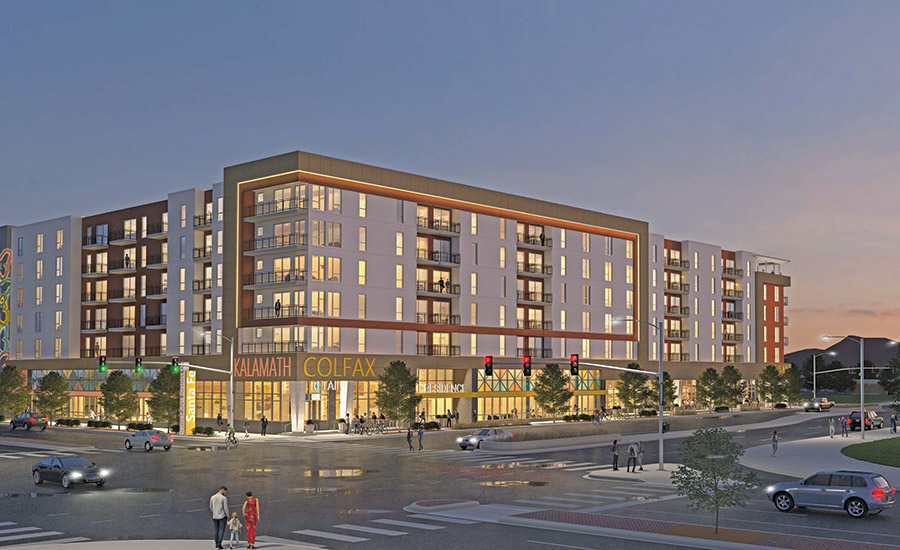 Image courtesy of the Opus Group

The Opus Group has started construction of a 280-unit multifamily development in Denver’s Lincoln Park neighborhood at the southwest corner of Colfax and Kalamath. Called KALACO Apartments, the development is located across the street from the Auraria Campus and will include 9,400 sq ft of retail space at the street level. The seven-story building will offer studio apartments and one-, two- and three-bedroom units as well as live-work spaces, which will allow residents to operate a business on the first floor. Ten percent of the units will be affordable to households earning 60% to 80% of the area median income.
Amenities include a clubroom on the top floor, a green roof deck, a multilevel fitness center, an oversized pool, a 2,100-sq-ft first-floor co-working space and a gallery to promote the work of local artists. Opus is the developer, design-builder, interior designer, architect and structural engineer of record. The project is scheduled for completion in March 2024.

Mountain States On the Scene: August 2022

Mountain States On the Scene: May 2022

Mountain States On the Scene: February 2022