This website requires certain cookies to work and uses other cookies to help you have the best experience. By visiting this website, certain cookies have already been set, which you may delete and block. By closing this message or continuing to use our site, you agree to the use of cookies. Visit our updated privacy and cookie policy to learn more.
Home » Surprises Challenge Restoration of Denver’s Montview Boulevard Presbyterian Church
Mountain StatesMountain States Construction Projects
Digging Deeper | Cultural/Worship

Today, a $7-million project led by Tryba Architects and Colarelli Construction is restoring or reimagining nearly every space in the 85,000-sq-ft building and its two-acre campus. From windows and wiring to a contemporary 1,250-sq-ft, lantern-like addition, more than a dozen integrated projects are designed to ensure Montview’s legacy continues for another 100 years.

While the construction schedule was adjusted to take advantage of the building’s closure during the pandemic, the initial challenge arose from the project’s technical pieces, says Vince Colarelli, president, Colarelli Construction, the project’s construction manager and general contractor. “We have had to determine how to make upgrades to a building that has been built with multiple additions over the course of a century,” he says.

“As with any historical project like this, the biggest challenge has been not knowing what we don’t know,” adds Tryba project architect Megan Burke. “We opened one wall and found a chimney. Where we planned to put a large window, we found a steel beam.”

“It has been an interesting challenge to address design modifications in the field once we discover these unexpected elements,” adds Burke, who conducted weekly site walks with the Colarelli team, “but it has really come together in a transformative way thanks to our collective and collaborative efforts.” 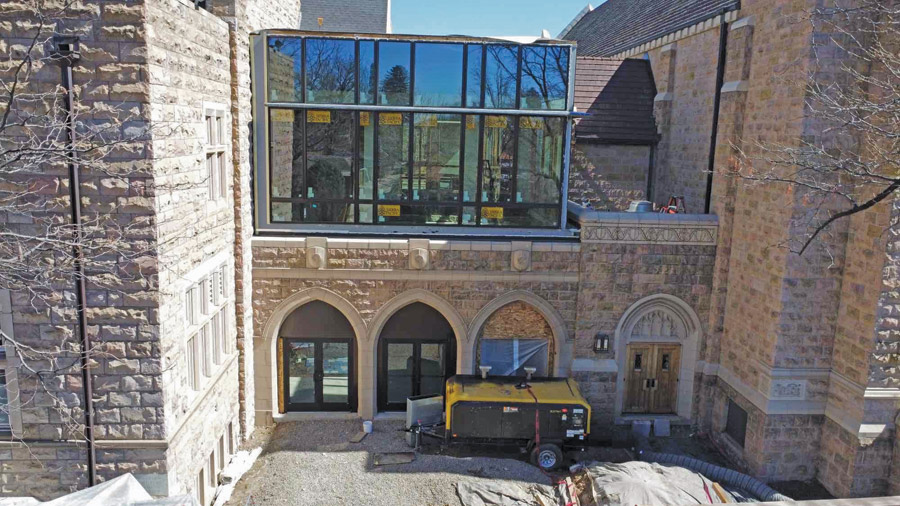 The 1910 building stands as a well-preserved example of an early-20th-century urban church, the work of multiple master architects in Denver. In 1918, Harry J. Manning and Frank W. Frewen designed a Richardsonian Romanesque–style addition to the original 1,400-sq-ft chapel. A decade later, Burnham F. Hoyt and Merrill H. Hoyt created the distinctive 1926 educational wing in the same style. And in the late 1950s, the church added its current 10,000-sq-ft sanctuary building to accommodate a booming membership.

A dozen priority projects were identified, including reconfiguring the Dahlia Street entrance to improve wayfinding; turning the church’s original—and currently unused—Montview Boulevard entrance into a welcoming “front porch”; and redesigning a hard-to-navigate back alley with uneven concrete, fire escapes and window wells into a charming walkway along Eudora Lane.

Other important work includes restoration of the building’s wood paneling and ornate stonework, MEP upgrades and the refurbishment or replacement of 219 original windows. 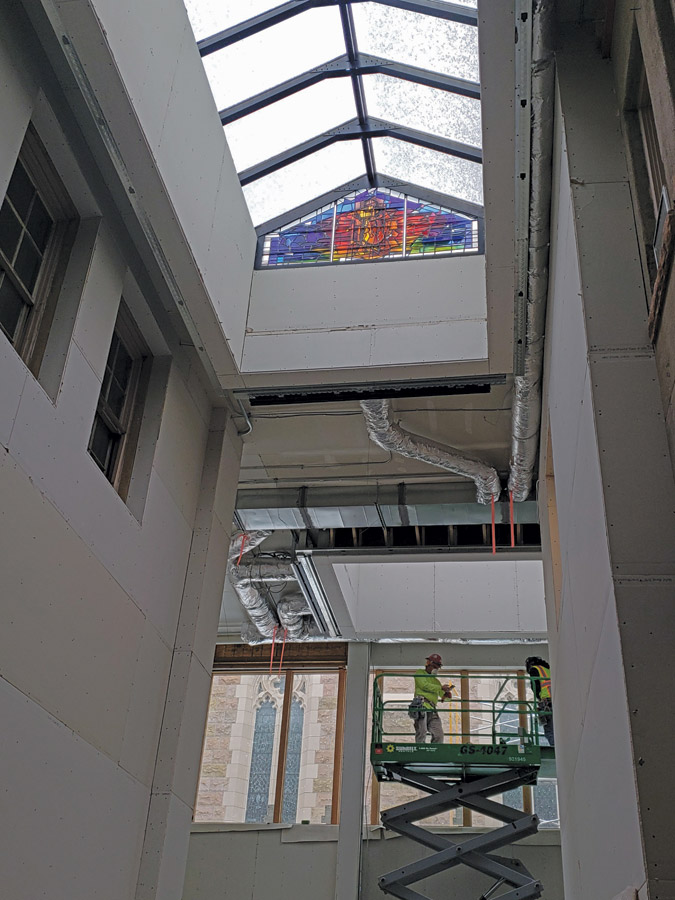 The addition of a second floor to the Westminster Commons creates space for a bridge with access to the choir loft.
Image courtesy of Colarelli Construction

When COVID-19 reached Colorado in March 2020, the Montview staff was sent home to work remotely, and all educational programs and church services were moved to online formats. “We were going to do the project in phases, but because everyone was out of the church, we decided to do it all at once,” Burke says.

Asbestos work and maintenance, including painting the 10,000-sq-ft sanctuary, began in the fall of 2020. However, while the building’s closure allowed the project team to do design and construction in an unoccupied building, the pandemic also threatened to bring the project to a halt on more than one occasion as entire subcontracting teams were affected.

“We thought COVID would shorten the schedule because we’d have full access to the building, but in reality it became our biggest challenge.”
— Bob Cloud, Director of Facilities, Montview Church

“We thought COVID would shorten the schedule because we’d have full access to the building, but in reality it became our biggest challenge,” says Bob Cloud, Montview director of facilities. “Colarelli had a very stringent COVID policy, and every day a portion of the workforce tested positive and couldn’t come to work. Then, as the project progressed, supply chain issues became our second biggest challenge,” he says.

Inside the newly expanded Dahlia Street entry—dubbed the Westminster Commons—the roof was removed and replaced with a 29-ft-tall, 1,250-sq-ft glass window wall to create the lantern-like entrance element.

“While standard production time for the glass is six weeks, it took 16 weeks instead,” says Colarelli project manager Courtney Tucker. “We just had to adjust, and that affected all the mechanical and electrical. The window wall placement dictates everything placed in the Commons, so we couldn’t go too far,” she says.

Roofing materials also were delayed for months and unavailable elsewhere in the country. “Staying ahead of [supply chain] challenges has been key,” she adds, noting that it was a daily exercise in pivoting, as crews were moved around the building to work on other pieces of the project. 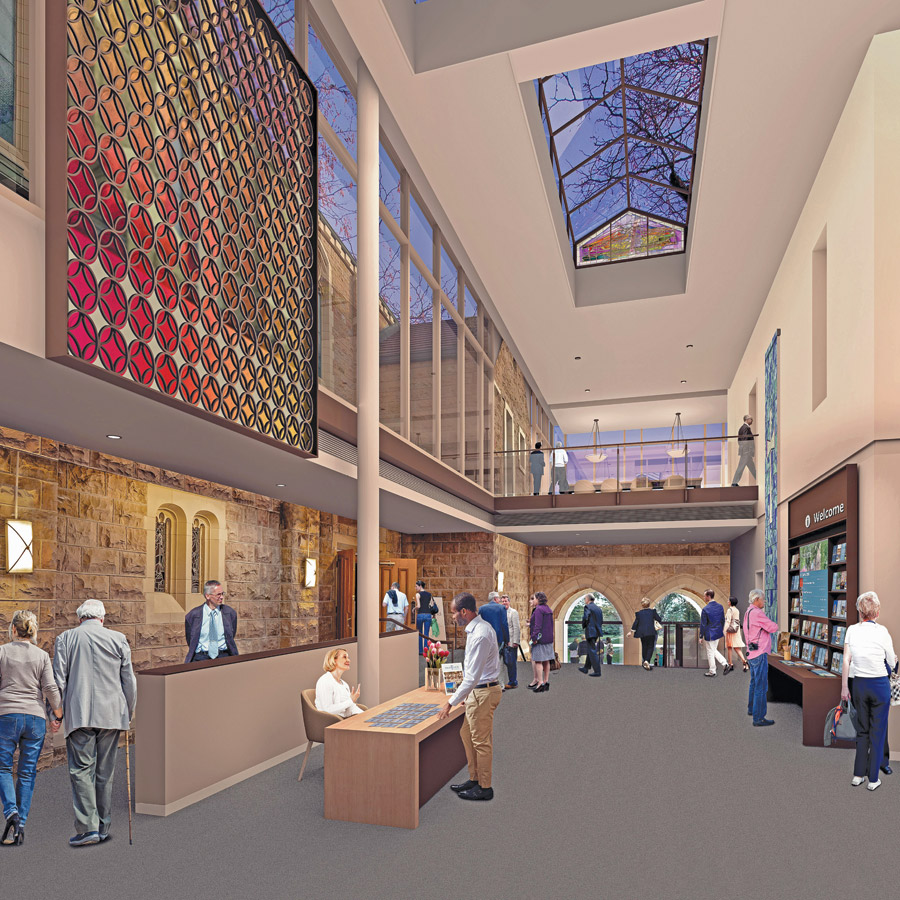 The vertically expanded Commons area brings in more light to a modern space for congregation and social exchange.
Image courtesy of Tryba Architects

The building’s 100-year construction history also created challenges. “We found elevations for supporting structures to be different than what was shown on the drawings, and we discovered documents for the electrical systems that were materially different than what’s in place. It adds a layer of complication,” Colarelli says.

“You know what you’ve discovered today, but you don’t know what else you are relying on that could not be true,” Colarelli says. As new details were uncovered, the team continually made adjustments.

The existing load-bearing masonry walls were out of plumb and had to be shaved down by an inch and a half to accommodate the addition of a new accessibility lift at the entrance to the Commons. Crews then constructed a walkway on the atrium’s second level to provide accessibility from the lift to the choir loft, cutting through a 24-in.-thick masonry wall and creating precast stone elements to match the historic stone. “Every single wall in the building is solid masonry” and that posed a challenge for electrical work as well, Tucker says. 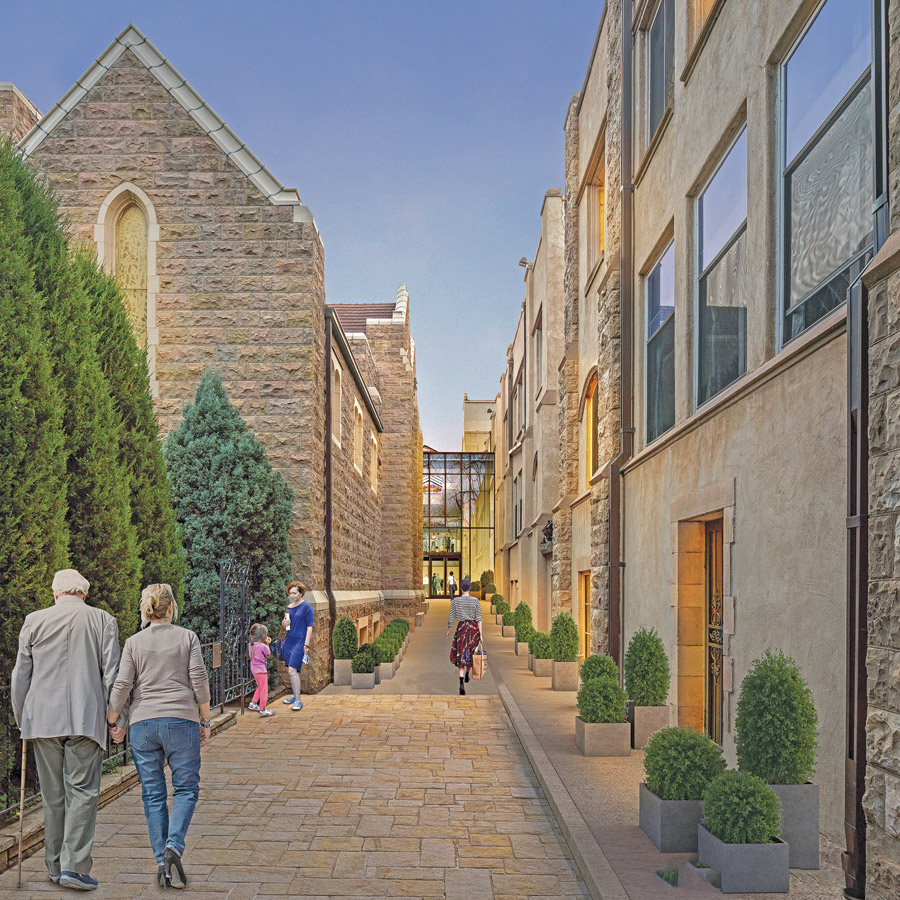 A European-style walkway replaces the old sidewalk and is designed with radiant heat beneath the concrete to melt snow and ice. Planters are being faced in rhyolite veneer to match the original tumbled stone of the building.
Image courtesy of Tryba Architects

Another significant element of the design entailed opening up two of the building’s oldest spaces—the 1918 Miller Center and the original 1910 Heritage Center—and connecting them architecturally. The Miller Center theater is being converted into a flexible space to host a variety of community events. Crews are restoring its historic wood paneling, along with original windows that had been boarded up and painted over.

“This project was about trying to restore [these spaces] to their original beauty and grandeur,” Colarelli explains, “from the repair and replacement of the [Miller Center’s] dome ceiling to the restoration of light fixtures, reconstruction of the stage and building a new turntable.

“As we started to peel back the layers of the onion, we began to discover what was there and what was not,” he says. As crews rebuilt the stage, they encountered various elevations and add-ons, “so we scrapped the plan, took it apart and reused the original lumber to reconstruct it instead because it was so important to the legacy of the space.

“There’s no way we could have anticipated this in the design,” he adds. “But today everything flows naturally from one space to the other. As a result, the Miller Center is such a beautiful aspect for the campus; its restoration was really meaningful.” 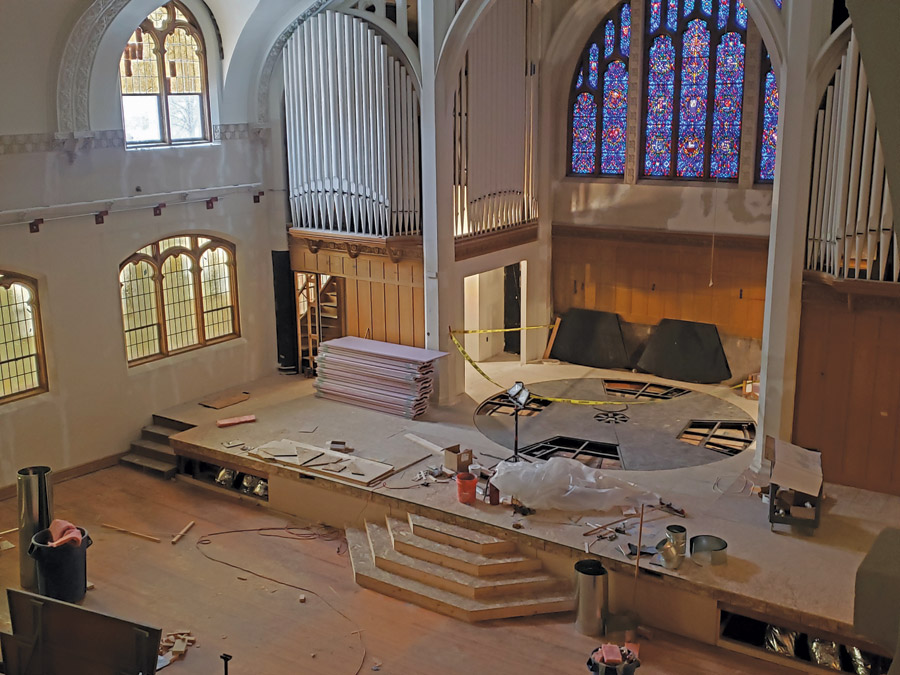 Built in 1918 as the church’s second sanctuary and later turned into a theater for local productions, the 3,365-sq-ft Miller Center is being converted into a flexible, dynamic space to host a variety of events.
Image courtesy Colarelli Construction

While reconstructing Eudora Lane, crews discovered the corridor had been used for utilities throughout the years—including a storm drain system—that were active and had never been documented. “We had to go back and discover how the storm drain system was working on the building, what could be removed and how to redesign while accommodating changing grades,” Colarelli says.

“You take a schedule that is A first, B second, C third, but when everything sits on top of each other, you find out they’re a little more difficult to deal with because they are all interrelated. You make big course corrections along the way, and that becomes the story. You get there each morning and start making adjustments all day long. It adds a layer of complication,” Colarelli says.

But the team stayed true to the big picture, often referring to the vision in the Grey Book when challenges arose, he says. “We had to consider the historic quality of the building, along with a more subtle understanding of the legacy piece—how the building wants to celebrate relationships with the greater community,” Colarelli says. “That was key.”

Montview’s Cloud adds: “As the project nears completion this spring, it has been nothing short of amazing to see how all the pieces have come together.”