This website requires certain cookies to work and uses other cookies to help you have the best experience. By visiting this website, certain cookies have already been set, which you may delete and block. By closing this message or continuing to use our site, you agree to the use of cookies. Visit our updated privacy and cookie policy to learn more.
Home » CSU’s Spur Campus in Denver Builds on Innovation and Collaboration
Mountain StatesMountain States Construction Projects
Digging Deeper | Higher Education

Colorado State University’s bold step to build a hub for research, education and outreach linking issues related to health, food and water is coming to fruition at its new Denver campus called CSU Spur. The university is spending $200 million of state funds to build three new buildings, each supporting research and work in those fields, while also opening the entire campus as a free public learning environment.

When complete, the effort will provide CSU with nearly 300,000 sq ft of space along the South Platte River at the western edge of the 250-acre National Western Center (NWC) campus. CSU is one of the three NWC founding partners, along with the city and county of Denver and the National Western Stock Show.

“It’s about creating community,” says Jocelyn Hittle, assistant vice chancellor of CSU Spur, adding that the project’s success comes from building relationships with the other partners on campus. “It’s something special that comes from the integration of what we all do.”

Building a campus within a campus presented several coordination challenges as multiple other separately contracted projects are ongoing, including an innovative sewer-heat recovery district energy system (see sidebar, p. MS24) that will provide heating and cooling to CSU’s new buildings and, once up and running, will be the largest of its kind in North America. 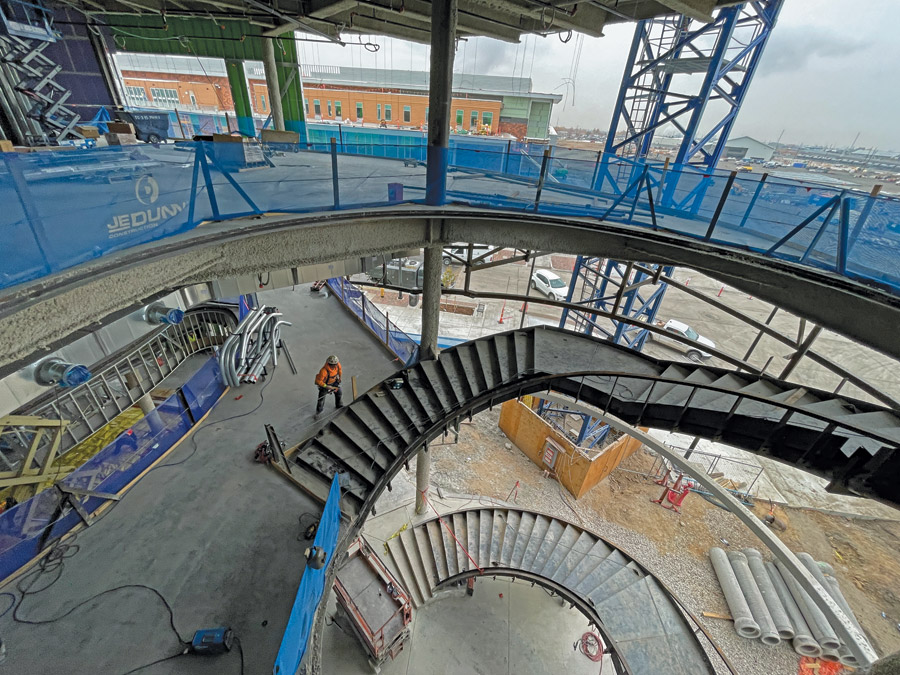 Like an eddy in a stream, the circular atrium at Hydro, with its spiral stair, was designed as a space for people to slow down and think about the importance of water in their lives.
Image courtesy CSU System

When the city announced EAS Energy Partners as the district energy system partner for the campus, CSU already was working with its owner’s representative, CAA ICON, to select each of the three architect-led teams for the new Spur campus. Hord Coplan Macht and SmithGroup were hired to design the water building, eventually named Hydro (Greek for water), and Clark & Enersen was chosen for Vida (Spanish for life) soon after. AndersonMasonDale won the design for Terra (Latin for land) shortly after CSU announced JE Dunn as its construction partner for all three buildings in the spring of 2019.

With so much concurrent activity and multiple contracts, “it’s critical to have a lot of trust and understanding so we can help each other,” says Dan Loosbrock, project executive for CAA ICON, adding that teams have “weekly, daily conversations to ensure we don’t get in each other’s way.” 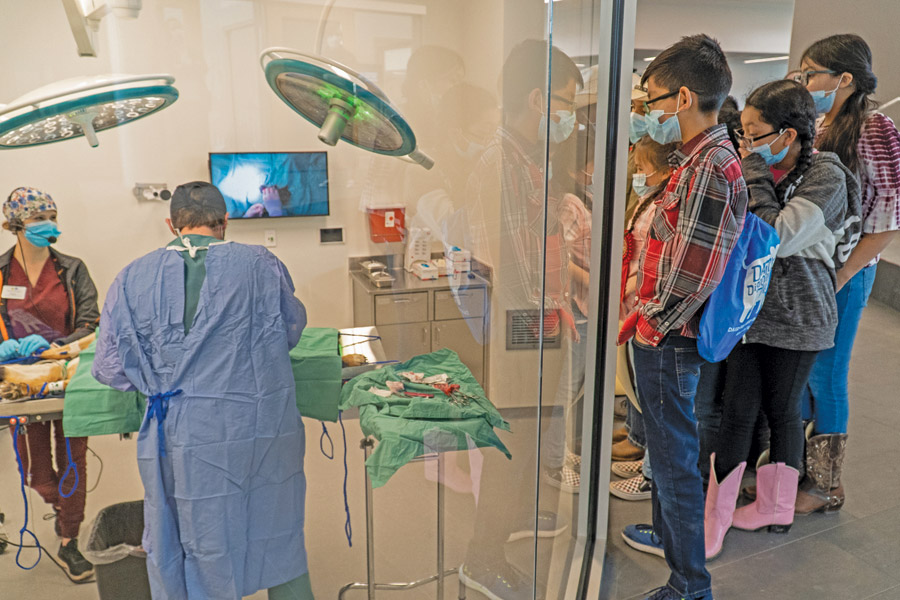 At that point, CSU had yet to agree to use the EAS energy system, which wasn’t formalized until November 2020, although campus leaders agreed to it in principle in late 2019. Meanwhile, initial designs for all three buildings faced budget overruns and challenges to meet energy goals.

“When you’re doing district energy with a bunch of different users, it’s going to be complicated,” says Hittle, but she adds the returns in energy efficiency and benefits to the site are worth it. “We’re excited to see those big sewer pipes underground and access to the river opened up.”

Collaboration and mutual respect among the different design teams aided in getting the project to budget—for example, by using the same furniture vendor across all three buildings. “It helped that all three design teams really respected each other,” says Jennifer Cordes, principal at Hord Coplan Macht. “We all feel a lot of loyalty for the university, and we wanted to do what was right for the institution.”

Matt Aschermann, senior project manager for JE Dunn, says employing several common trade partners across all the buildings provided an advantage, but “especially for Terra and Hydro, which are physically connected over the road with a bridge.” Having Cator Ruma & Associates on the team for mechanical and electrical engineering and MTech Mechanical as the common mechanical trade partner for those two buildings presented an opportunity to save costs when engineers at Cator Ruma proposed combining the two distinct mechanical systems into a single system serving both buildings. 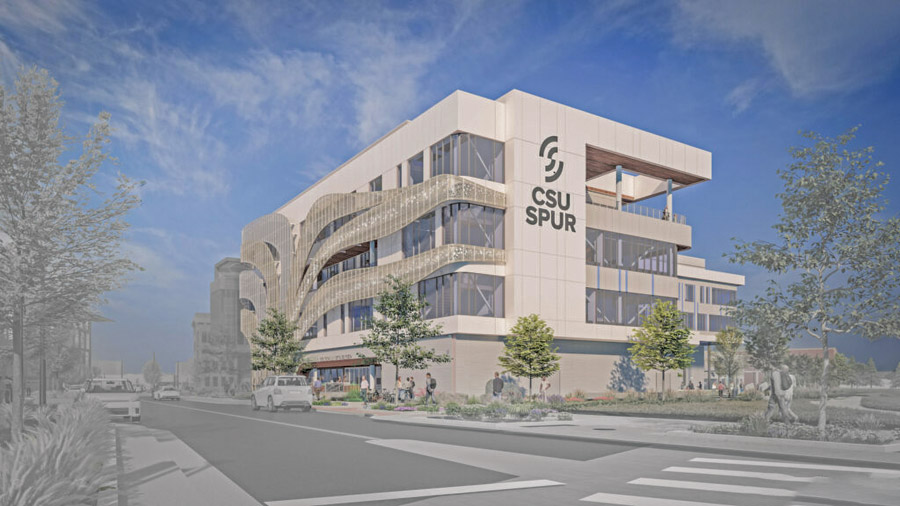 “There was a lot of money going into the heat pump, chiller plant and all the pumps and accessories in both buildings,” says Sean Convery, principal and mechanical engineer at Cator Ruma. “It’s an incremental cost increase to go larger in Hydro and delete the plants in Terra, and then we’re just running pipes across the bridge.”

Beyond the cost savings on equipment and avoiding added time to install two systems, the single-system approach “provides future owner maintenance savings by having all the equipment in one place,” he says.

This “was a big, big deal,” says Cordes, noting the two different architects, schedules and budgets for each building and the negotiation required to take money from one project to spend on the other. 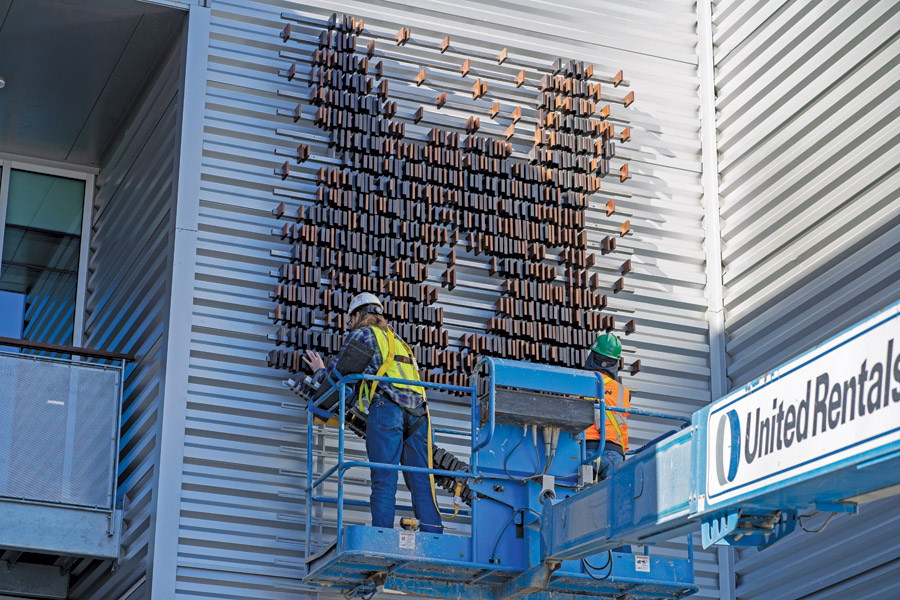 “Vida has a lot of firsts,” says Hadley Stolte, project manager and lead design architect for Clark & Enersen. “There are very few examples of buildings that bring these types of spaces together under one roof and [are] so accessible to a metro area.”

He notes that small and large animals have different health needs and that the design also needed to accommodate visiting veterinarians, CSU faculty and students while providing opportunities to engage with the public, including school kids visiting from more than 130 districts statewide.

“There are very few examples of buildings that bring these types of spaces together under one roof and [are] so accessible to a metro area.”
—Hadley Stolte, Project Manager & Lead Design Architect, Clark & Enersen

Interactive exhibits include viewable operating spaces that allow visitors to interact with DFL veterinarians as they perform surgeries on small animals and mock examination rooms where kids can learn about their pet’s health care needs.

The Temple Grandin Equine Center aims to advance research and education in equine-assisted services, aiding people with conditions such as autism, cerebral palsy or post-traumatic stress disorder. At the CSU Equine Medicine and Rehabilitation Center, visitors can watch horses undergoing a variety of therapies or walking on underwater treadmills.

“All exhibit spaces were designed to be flexible learning environments,” says Brian Rock, interior designer and associate principal at Clark & Enersen, adding that they lend “an open museum feel” to the building. 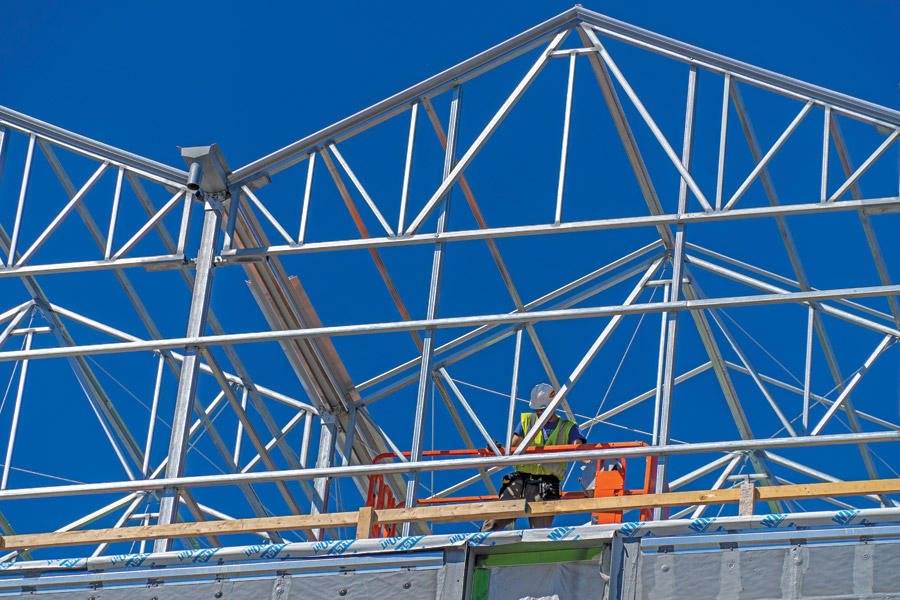 Terra, Hydro Up Next

Crews are getting close to completion at Terra, the 60,000-sq-ft Denver home for the staff and faculty of CSU’s College of Agricultural Sciences, with finishing touches underway and a grand opening scheduled for June 8. Like its companions, Terra includes publicly accessible spaces where the visitors can watch the urban agriculture research happening within. It includes at-grade outdoor, terrace and vertical gardens and rooftop greenhouses along with a green roof. Learning opportunities are designed to broaden the understanding of issues faced in food and agriculture and include labs and a public teaching kitchen where community members can learn how to grow and prepare their own food. 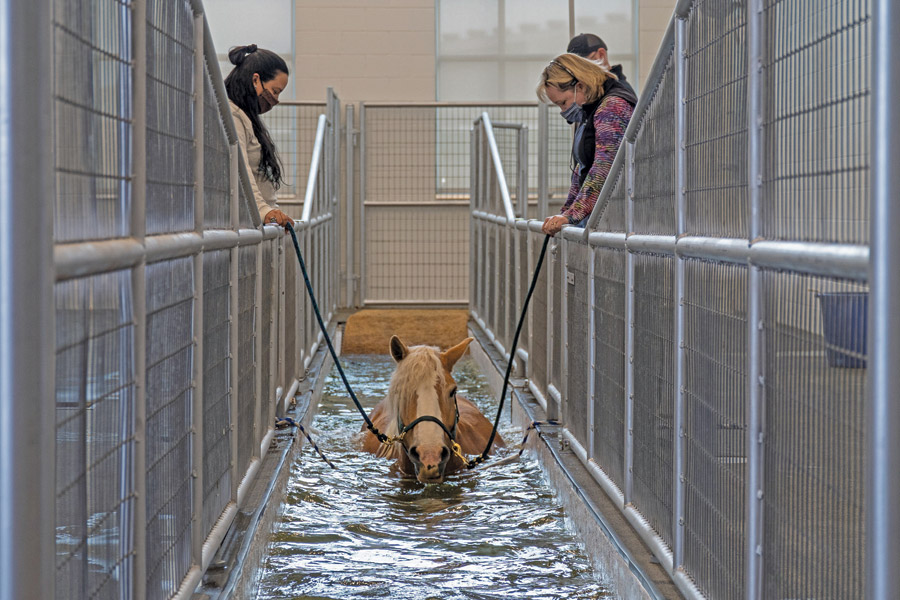 Hydro, the 122,000-sq-ft-building that supports advancements in water, is on track for its scheduled November 2022 opening. It houses Denver Water’s water-quality lab on the third floor, where visitors will again be able to view the research and testing within while giving Denver Water room to expand.

“We wanted to make sure we were functional Day 1,” says Alfonso Gonzales, water quality laboratory manager at Denver Water, while “making sure that we can grow in the future.”

That includes participating with the design team in what Denver Water calls a “2P process” for lean or continuous improvement. “It gets the people that are doing the work to provide input and really test out” the design, says Tom Roode, chief operations and maintenance officer. At full build-out, the lab at Spur will enable Denver Water to triple its current capacity of testing nearly 70,000 samples each year.

Hydro also supports “pretty much everything else that CSU needed,” says Cordes, including flexible meeting and event spaces, for-rent labs and a café that will sell the food grown in Terra. 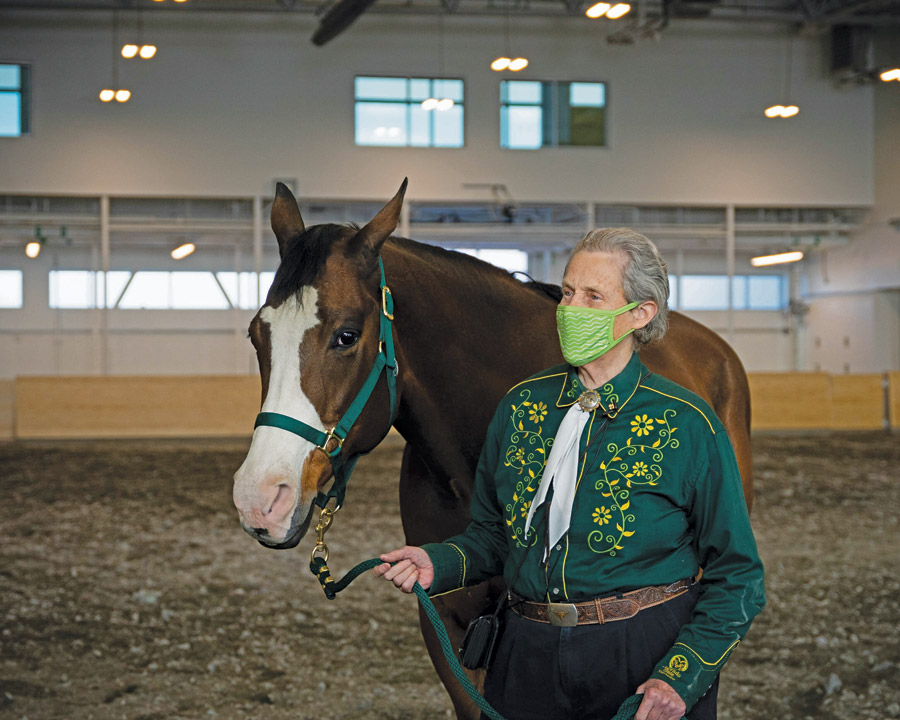 Renowned CSU professor Temple Grandin is pictured at Vida in the equine center, which is named after her. The center hosts programming for the betterment of horses and humans alike.
Image courtesy CSU System

The Hydro design team also accommodated CSU’s mid-project acquisition of the adjacent historic McConnell Welders building, incorporating it as an annex to serve onsite artists, part of a larger art program on campus that will include eight large-scale permanent installations along with temporary exhibitions.

“We thought about all the different stakeholders that were going to use this building—the K-12 students, the private corporate partners, the CSU researchers, the stock show visitors—[how] all these different people might move around the site … and we noticed that they were all converging in this main lobby space,” says Cordes.

She adds that the design concept evolved from the idea of a river eddy slowing water and creating a whirlpool, which evolved into a three-story open atrium with a circular stair. It offers an opportunity “to slow down and think about the importance of water,” she says. However, the architectural element presented one of the biggest challenges to the Cator Ruma team:―the required smoke-control system.

“It’s a ton of air you have to move,” according to Convery, who adds there’s more airflow through the smoke-control system than the whole building ventilation system, about 150,000 cu ft per minute. The design also required several iterations of computational fluid dynamic modeling to prove to Denver Fire that the system would work.

Other references to water in Hydro’s design includes the exterior scrim, which is “reminiscent of a river’s edge,” says Cordes. The building’s backyard, designed to represent the eight major watersheds of Colorado, leads to the South Platte and includes outdoor research lab and exhibits.

The entire campus is readying for its next big milestone when CSU begins removing the temporary mechanical systems currently supporting Vida and Terra and transitions to the new district energy system in early April.

Loosbrock says of the progress on the campus, “We’re taking what used to be 100 years of stockyards and building something completely new.”

2022 Contractor of the Year: Future Looks Bright For Utah Contractor

With New Stadium, CSU Football Fans Can Return to Campus on Game Days